Accessibility links
Federal Judge Strikes Down Lame-Duck Changes To Wisconsin Voting Laws The bills were passed after Republican Gov. Scott Walker was defeated but before Democratic Gov. Tony Evers was sworn in. 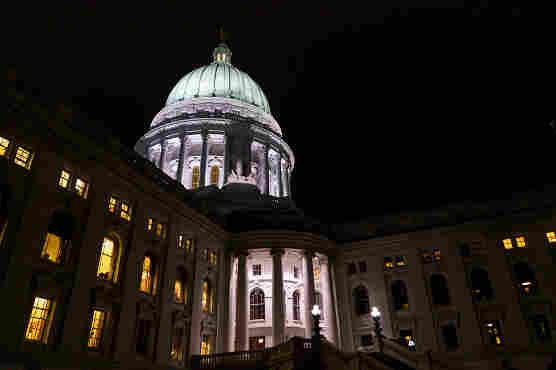 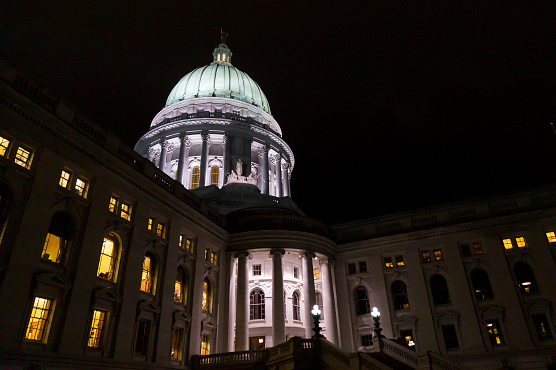 A federal judge has struck down voting restrictions passed and signed during the Wisconsin Legislature's lame-duck session.

A federal judge has struck down controversial restrictions on early voting in Wisconsin that were passed during the state Legislature's lame-duck session last month.

The restrictions limited early voting in Wisconsin to the two weeks before an election. In recent years, cities including the Democratic strongholds of Milwaukee and Madison have offered several weeks of early voting.

Former Republican Gov. Scott Walker signed the new restrictions into law roughly three weeks before he was to leave office and be replaced by Democrat Tony Evers. The same lame-duck session of the Legislature also sought to curb Evers' powers, in a move widely criticized as a power play.

Liberal advocacy group One Wisconsin Now joined with the National Redistricting Foundation, an arm of the National Democratic Redistricting Committee headed by former U.S. Attorney General Eric Holder, to argue that the new restrictions violated a 2016 federal ruling on election laws in Wisconsin. The groups appealed to the judge in that case, Judge James Peterson of the Western District of Wisconsin, to block the new law.

Peterson issued a favorable ruling for the groups on Thursday afternoon.

"This is not a close question," Peterson wrote in his decision.

The judge also struck down a law passed during the lame duck session that requires a 2-year expiration date on student IDs used for identification at the polls, as well as a law that limits the use of receipts as valid voter identification for individuals who are involved in a sometimes lengthy process of getting a valid ID without a birth certificate.

"We saw voters respond incredibly when voting was expanded in Wisconsin - voters stepped up, they saw the ability to vote and they voted," she said.

Eicher said the ruling will allow communities to continue to provide "the kinds of voting experiences that they need."

Early voting in Wisconsin has increased steadily since 2016. More than 547,000 absentee ballots were cast in the state during the 2018 election, which set a new record for early voting turnout for a midterm election, according to the Wisconsin Elections Commission.

In an emailed statement, Holder said the ruling should serve as a rebuke to former Gov. Walker and "his cronies in the state legislature."

"Every voter in the state should be asking one question: Why are Republicans in the Wisconsin legislature so afraid of the people they claim they want to represent?" Holder said. "Though we are heartened by this decision, we will continue to fight any further efforts designed to undermine democracy in Wisconsin or any other part of our nation."

Republican supporters of the early voting limitation argued it created a level playing field for voting across the state. They said it was unfair that some communities offered several weeks of early voting while others, particularly rural areas, could not afford to do so.

Though Peterson's new ruling blocks the restrictions for now, the case is pending appeal before a federal appellate court.

A previous version of this story misspelled Analiese Eicher's name as Anneliese Eicher.