Accessibility links
Review: Netflix's 'Fyre' and Hulu's 'Fyre Fraud' Netflix and Hulu both have documentaries about the fiasco of Fyre Festival available this week. Both are serviceable, but there are some differences, and some ethical questions about both. 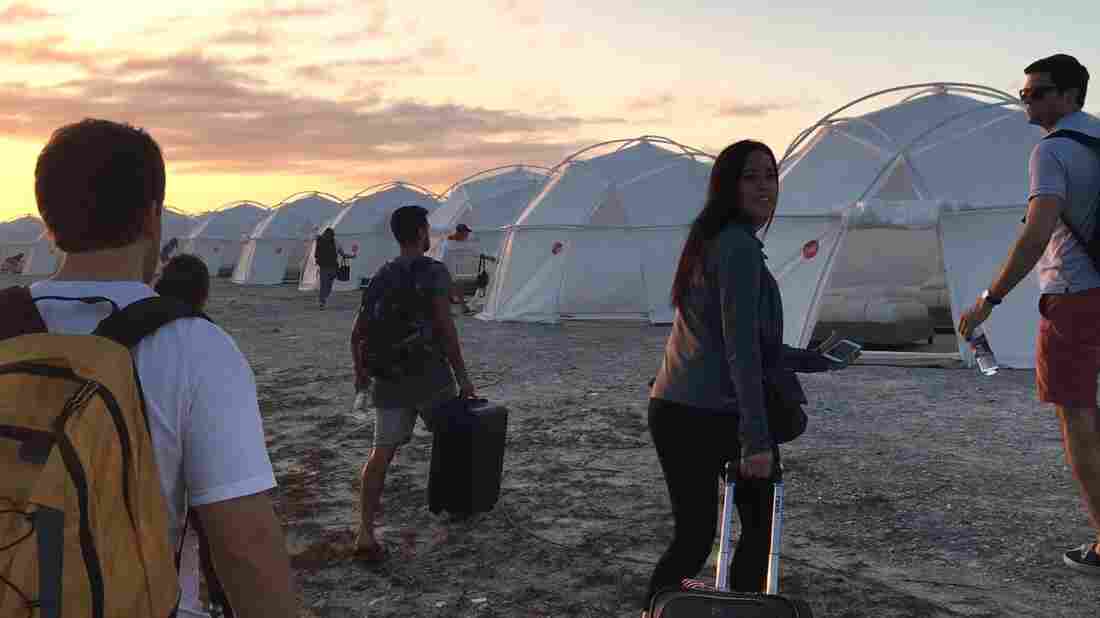 Festival attendees wound up dragging their luggage to tents — and that's only one of the indignities documented in the Netflix film Fyre. Netflix hide caption 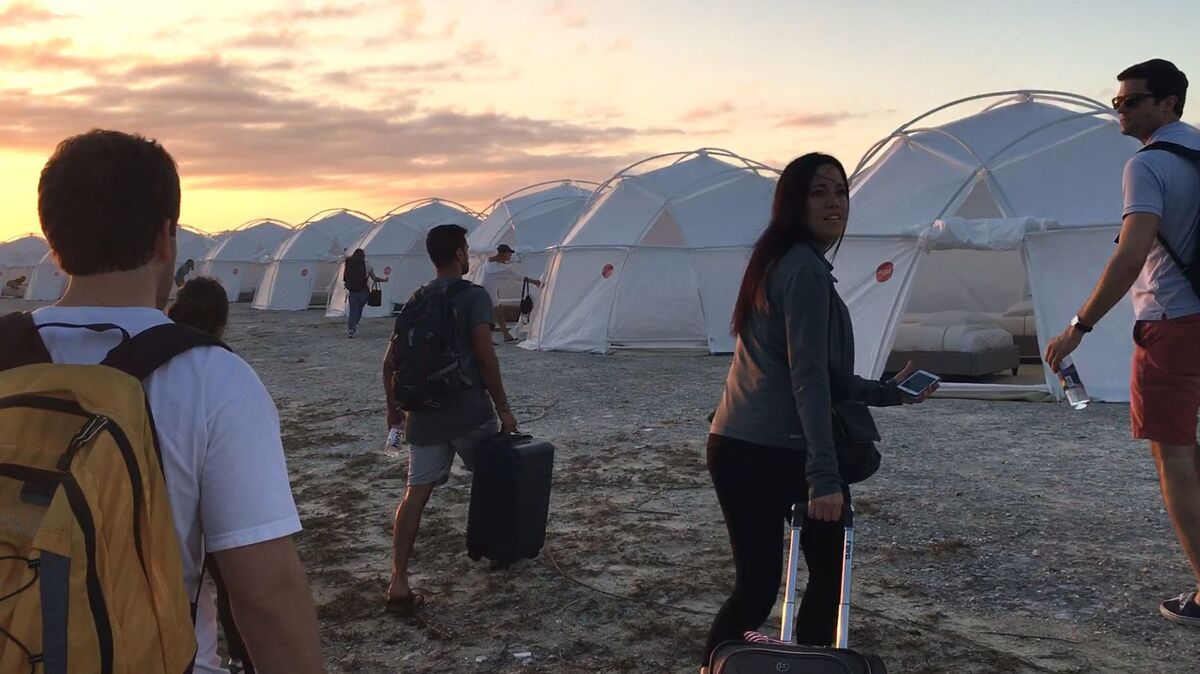 Festival attendees wound up dragging their luggage to tents — and that's only one of the indignities documented in the Netflix film Fyre.

In the months leading up to April 2017, Fyre Festival was promoted as a glamorous music festival that would be filled with Instagram models and other beautiful people, held on a secluded island with everyone in luxury beach accommodations and private villas. When guests actually arrived in the Bahamas, they found a lot of gravel, unfinished FEMA tents, mattresses they had to drag around themselves, and bands that had already canceled. It was an unmitigated disaster. Eventually, organizer Billy McFarland was sentenced to six years in prison for fraud.

Netflix has had a documentary called Fyre scheduled for release today (Friday, January 18) for quite a while. Directed by Chris Smith, the film promised to go inside the story of the festival and the organizers and how everything went so wrong.

Then on Monday, like a surprise Beyoncé album, an entirely different Fyre Festival documentary dropped on the competing streaming service Hulu. Called Fyre Fraud, it too went inside the festival organization and the forces that led to such a massive rip-off of so many would-be concertgoers.

And there were two things about Fyre Fraud likely to be of interest to those who were waiting for Smith's documentary to arrive on Netflix. One: The Hulu documentary, unlike the upcoming Netflix one, had an on-camera interview with Billy McFarland. Two: The Hulu documentary included a note at the end revealing that the other documentary floating around about Fyre Festival — that is, the Netflix one — had among its producers Jerry Media, the company that did the Fyre Festival's social media promotion and made its now notorious promotional video. Representatives of Jerry are interviewed extensively in the Netflix doc, in which they discuss things like their role in deleting comments that cast doubt on the competence of the festival's organizers. (I watched the whole thing and had no idea they were also producers.)

But, as Scott Tobias discussed in his fine piece at The Ringer, Hulu didn't escape ethical scrutiny, either, because that interview with McFarland? They paid him for it, as well as for some footage he allowed them to use, though they won't say how much. Chris Smith (who, you'll recall, made the Netflix doc) says he wasn't willing to pay McFarland for an interview, because he didn't think McFarland should benefit from his own misdeeds.

So to review: Two competing documentaries, both of which were made with at least one breach of normal journalistic practice. Paying for interviews, generally, is Not Done. Likewise, having the subject of a piece participate as a producer is Not Done.

In the end, perhaps what's most surprising is that the films are more similar than they are different. Both hit similar story beats: the Instagram marketing, the early signs of trouble, McFarland's earlier successful-but-weird business making a metal credit card for millennials that was like a superhero suit for their regular credit card. The lack of infrastructure necessary to support the festival. The straight-up lying (concealing, for instance, that far from being deserted, the Fyre location was adjacent to a Sandals resort, oh how basic). And then: the arrival of charter flights, the horrified visitors, the sad cheese sandwiches seen round the world on Instagram, and a coda about what McFarland did after he was arrested that is shocking even when you see it documented for the second time in a week. 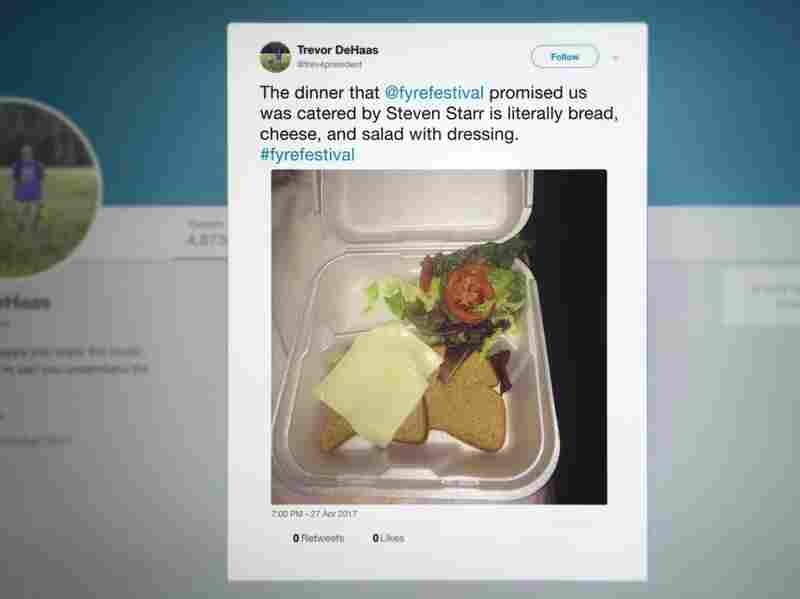 Fyre Festival was a creature of social media — and social media, like this tweet about the food screenshotted in Netflix's Fyre, helped bring it to its knees. Netflix hide caption

There are strengths and weaknesses in both: Hulu's tries harder to wrap its head around why this was the form that gullibility took for these particular festivalgoers — how Instagram and an "experience" economy made them vulnerable to empty promises about glamor. Netflix's tries harder to grapple with the consequences for the local businesses in the Bahamas, including, for instance, a vendor who says she went unpaid and lost a large amount of money.

If you love a story of absolute, no-holds-barred, extravagant disaster, you'll probably want to watch both. But if you just want a better idea of what the heck happened here, the truth is that either film will serve. Just know that — perhaps appropriately, given the subject matter — neither was made in the squeaky-clean manner we all might wish for.