Accessibility links
Former Chicago Cop Jason Van Dyke Sentenced To 81 Months In Prison For 2014 Murder The 2014 shooting was captured on an infamous video that showed McDonald, who was carrying a knife with a 3-inch blade, walking away from Van Dyke just before the officer shot him 16 times. 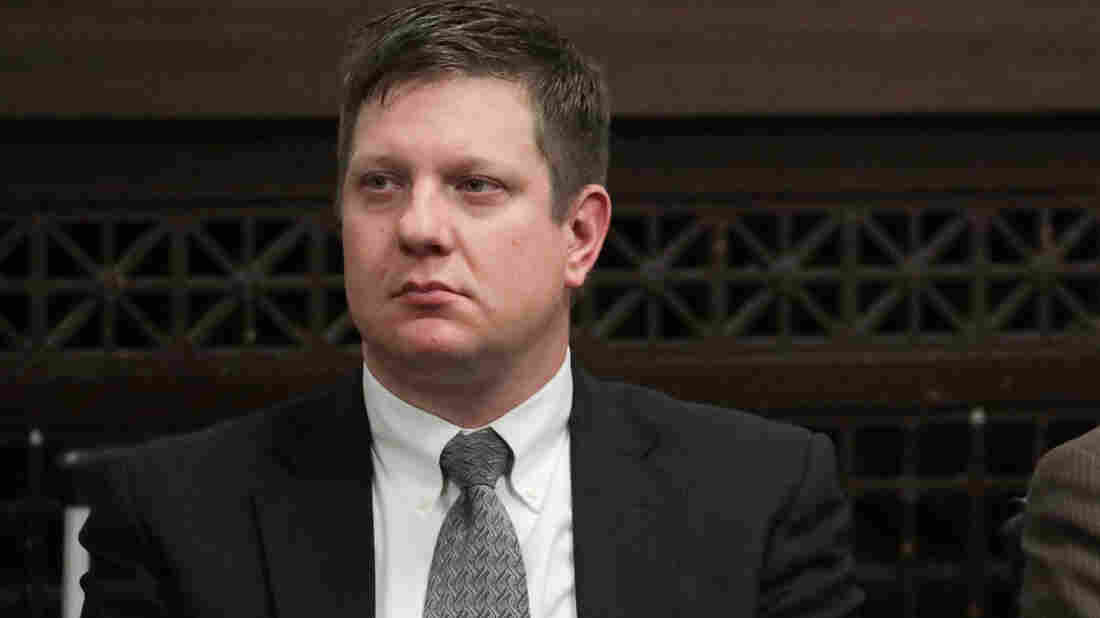 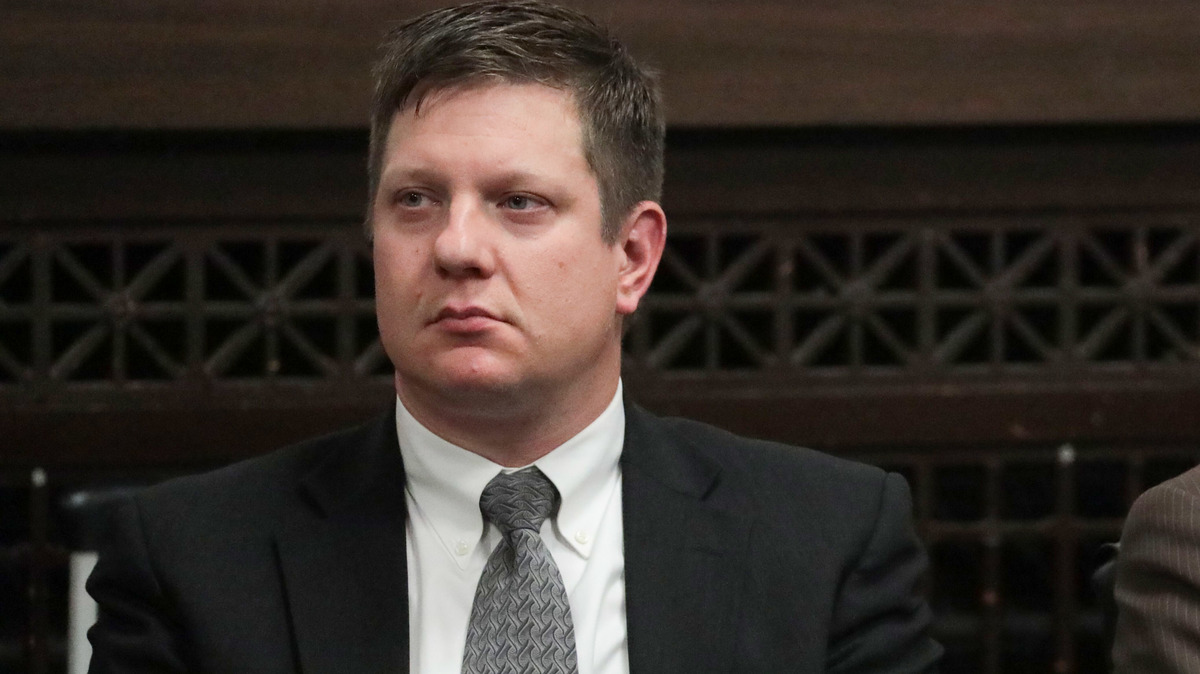 Former Chicago police officer Jason Van Dyke was sentenced on Friday to six years and nine months in prison for the murder of 17-year-old Laquan McDonald — an event that he called the worst day of his life.

The shooting was captured on an infamous police dashcam video that showed McDonald, who was carrying a knife with a 3-inch blade, walking away from Van Dyke just before the officer shot him 16 times on Oct. 20, 2014. The release of the video sparked protests and political upheaval in the city.

Last fall, a jury convicted Van Dyke of second-degree murder and 16 counts of aggravated battery, which gave Cook County Judge Vincent Gaughan the option to sentence the former officer to anything from probation to decades in prison.

Van Dyke, 40, is the first Chicago police officer in decades convicted of murder for an on-duty shooting. The jury decided not to convict him for first-degree murder, which has a minimum sentence of 20 years in prison.

Just before sentencing, Van Dyke quietly read a prepared statement: "I pray daily for the soul of Laquan McDonald ... (and) as a God fearing man, and father, I'll have to live with this for the rest of my life and take it to my grave."

The veteran judge, who has handled high-profile cases like the trial of R. Kelly, called the shooting "a tragedy on both sides." But in the end, he decided the 16 shots were all "one act" and that Van Dyke should only be sentenced on the second-degree murder charge, which carried a punishment of probation to 20 years in prison.

Additionally, second-degree murder allows defendants to be released after serving as little as 50 percent of the sentence. That means Van Dyke could be out of prison at age 43.

Prosecutors had asked that Van Dyke be sentenced from 18 to 20 years in prison for the aggravated battery convictions, which would have required he serve at least 85 percent of the term.

Despite the judge handing down a significantly shorter sentence, Special Prosecutor Joseph McMahon said he was "satisfied" with the outcome.

"We achieved our goal of holding Jason Van Dyke accountable for his actions the night he shot and killed Laquan McDonald," McMahon said outside the courtroom.

Activist William Calloway, who worked with independent journalists to help get the dashcam video released, called the ruling "a slap in the face."

"We don't agree with the judge's ruling at all," Calloway said. "We feel that what Jason Van Dyke did in shooting Laquan McDonald 16 times, that he deserves to spend the rest of his life behind bars ... 81 months in the Illinois Department of Corrections is a slap in the face to us and a slap on the wrist to him."

'There was no malice'

Van Dyke's lawyers had argued the former officer should be sentenced only to probation for second-degree murder, which is the minimum punishment allowed in Illinois. They noted that Van Dyke has no criminal history and had filed dozens of letters of support from his family and friends.

My biggest fear is that someone will kill my husband for something he did as a police officer. Something he was trained to do. There was no malice, no hatred on that night. It was simply a man doing his job.

Van Dyke's wife of 17 years, Tiffany, described how the family has had financial trouble and temporarily lost health insurance. She said her children are bullied, don't eat, don't sleep and have nightmares. To speak to their father, the family spends hundreds of dollars a week on phone calls to the jail.

"My biggest fear is that someone will kill my husband for something he did as a police officer," she said through tears. "Something he was trained to do. There was no malice, no hatred on that night. It was simply a man doing his job."

Van Dyke's 17-year-old daughter, Kaylee, also gave a statement that detailed how she is depressed and has been bullied since her father was charged. Van Dyke wiped away tears as his daughter spoke to the court. His 12-year-old daughter also wrote a letter that was read in court.

Other current and former officers spoke about how Van Dyke was a good cop and how McDonald would not have been shot had he dropped the knife.

An officer whose actions had been questioned before

Earlier in the day, prosecutors called on McDonald's great-uncle to read a statement in the deceased teen's voice. They also called five other witnesses to testify — sometimes emotionally — about how Van Dyke treated them during arrests. One talked about how an "infuriated" Van Dyke put a gun to his head; another described being choked in the back of a police car.

Chicago police records show that at least 22 complaints had been filed against Van Dyke before he shot McDonald. He was found not at fault in all of them.

When it came to Van Dyke's decision to shoot McDonald, prosecutors questioned the former officer's judgement.

"There were 16 separate gunshot wounds, each one causing harm to Laquan McDonald," said Joseph McMahon, the special prosecutor. "He continued to assess — and shoot that gun — throughout the entire process."

After nearly three years of pretrial hearings, lawyers spent about three weeks presenting their cases last fall. It took the jury of eight women and four men about eight hours to reach their verdict.

Van Dyke, 40, has spent most of the time since his Oct. 5, 2018, conviction in solitary confinement at the Rock Island County Jail, three hours west of Chicago. He will now be transferred to a state prison.

The sentencing came a day after three other Chicago police officers were found not guilty of covering up for Van Dyke. Prosecutors had claimed that officer Thomas Gaffney, former officer Joseph Walsh and former detective David March inaccurately filled out police reports to protect Van Dyke.

That decision drew the ire of local activists, who called for a large crowd to return to the courthouse for Van Dyke's sentence.

This story is part of 16 Shots, a podcast about the fatal police shooting of Laquan McDonald, the trial of officer Jason Van Dyke and the troubled relationship between African-Americans and the Chicago Police Department.