Accessibility links
Video: Giant Great White Shark Frolics With Divers "What some don't realize is that sometimes sharks seek touch," Ocean Ramsey said after the unforgettable encounter in Oahu. She and her team swam beside a 20-foot-long shark they say is Deep Blue. 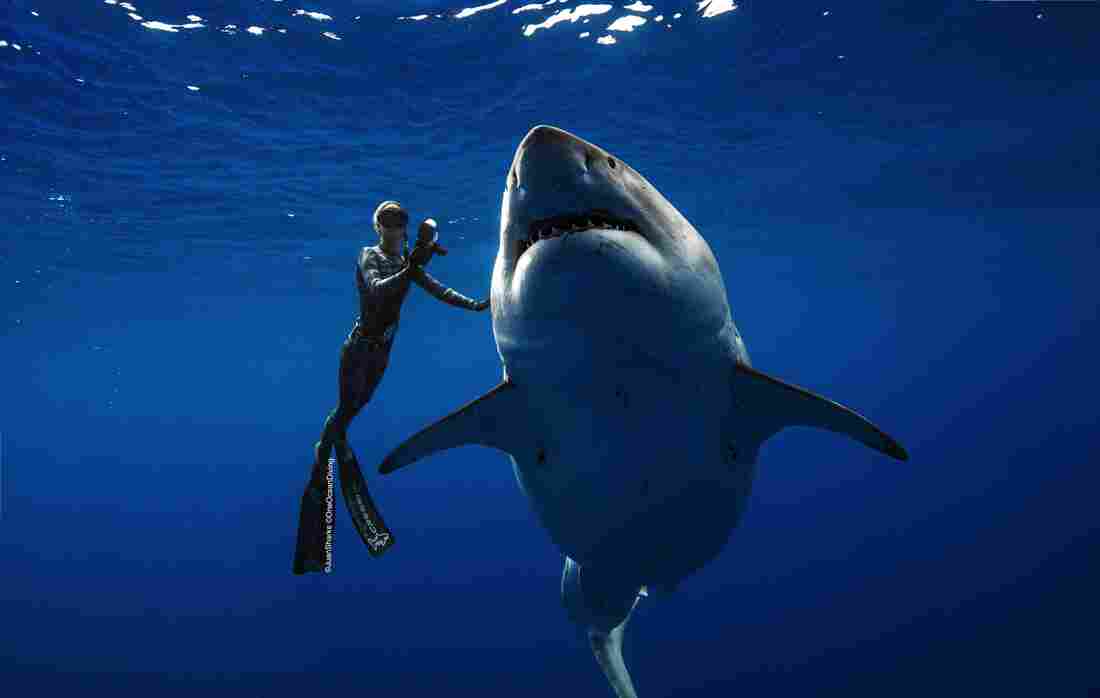 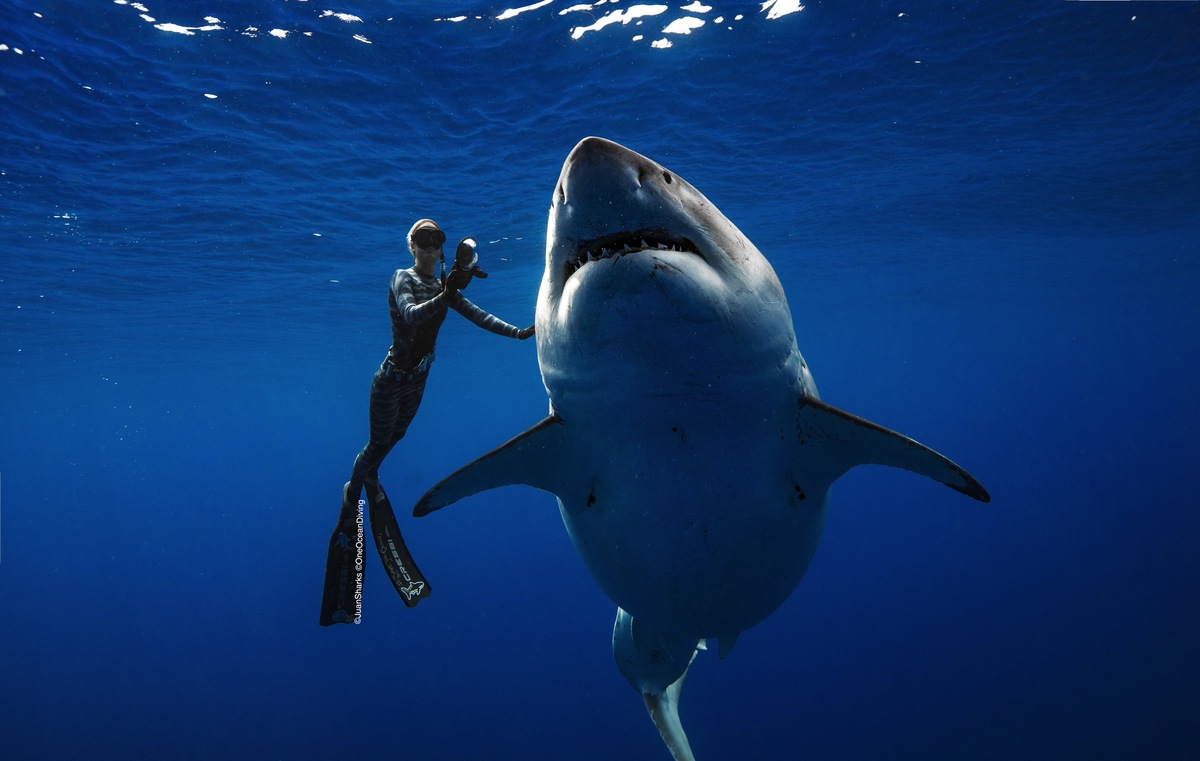 Divers off the coast of Oahu's North Shore had the rare treat last week of swimming and frolicking with a great white shark, widely believed to be one of the largest in the world, and the thrilling, interspecies encounter was captured on video.

Ocean Ramsey, who independently studies sharks and leads cage-free shark diving tours off the Hawaiian island, was in the water with her team, monitoring a group of tiger sharks feeding on a decomposing sperm whale on Tuesday, when she suddenly spotted Deep Blue, as the 20-foot-long female shark is called.

"I waited quietly, patiently, observing as she swam up to the dead sperm whale carcass and then slowly to me," Ramsey wrote on Instagram.

As the dead whale drifted closer, Ramsey extended her arm out toward the massive shark "to maintain a space so her girth could pass."

Eventually, Ramsey's gloved hand caressed the shark. "What some don't realize is that sometimes sharks seek touch," she said. 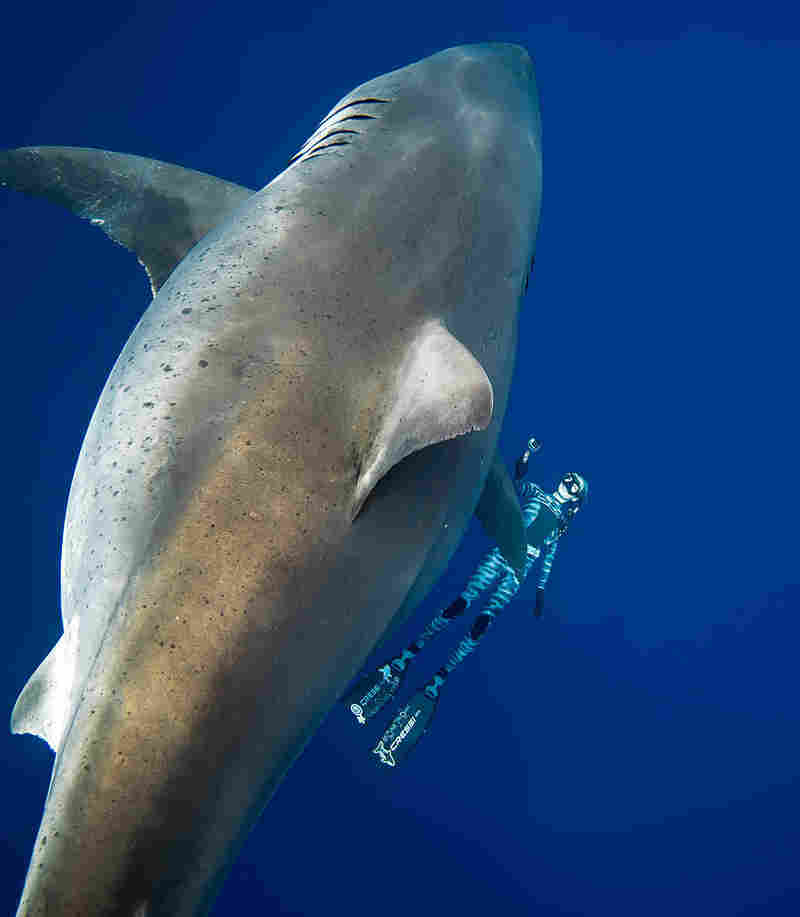 Ramsey urged the public not to try to engage with sharks, regardless of their size. She noted her years of experience and research, reminding the shark-petting hopefuls watching the video that great white sharks are apex predators capable of inflicting grave injury. Juan Oliphant /One Ocean Diving hide caption

It seems the shark was in an especially playful mood, according to Ramsey, who noted that the apex predator was flanked by two rough-toothed dolphins "who danced around her."

Great whites "are not the mindless monsters they are portrayed as," she added in a separate post. But Ramsey urged the public not to recklessly jump into shark-infested waters regardless of the size of the animals. "They're capable predators who need and deserve respect," she said in another Instagram post.

Ramsey told the Honolulu Star-Advertiser that Deep Blue looks like she may be pregnant. "She's shockingly wide," Ramsey observed. 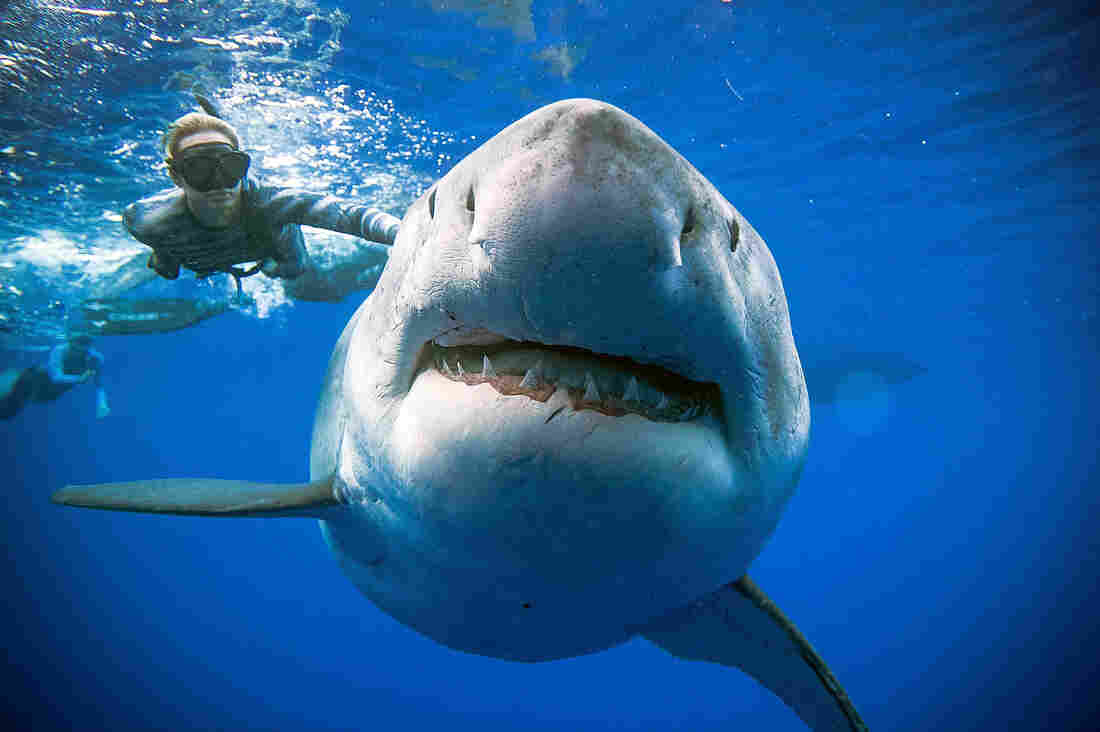 Ramsey says Deep Blue looked pregnant, which could explain how the great white ended up off the coast of Oahu. Pregnant sharks are known to follow whales across the Pacific. Juan Oliphant /One Ocean Diving hide caption

Marine biologists have not definitely identified Deep Blue as the star of the videos, but Chris Lowe, director of the shark lab at California State University, Long Beach, told NPR the great white's markings match those of the Internet-famous creature, who first made a splash when she was caught on camera five years ago.

Additionally, Lowe said it makes sense that it would be Deep Blue because "female sharks usually swim out to the middle of the Pacific, sometimes as far out as Hawaii, for two years before they come back to California or Mexico to have their pups."

"Nobody knows for sure why they do it," Lowe continued, explaining that Deep Blue was spotted off the coast of California over a year ago.

According to tracking data, the female sharks typically return to the West Coast — either Baja California, Mexico or California — in the early spring to deliver their pups.

Regardless, Lowe said tagging data indicate three female sharks have been recorded feasting on the "floating buffet" that is the dead sperm whale carcass off Oahu.

"For a female that's carrying six babies — two to 10 babies that will be born at about 4 1/2 to 5 feet long, weighing about 40 pounds apiece — that's more than just a meal. It's like five Thanksgiving feasts all in one go," he said.

Shark populations around Hawaii have been declining for years, and Ramsey said she hopes Deep Blue's moment in the spotlight will also shine a light on much-needed shark protection legislation.

"There are currently no laws to protect sharks from being killed" except for a ban on killing them for their fins," she wrote in a statement. "And even that law has many loop holes," she added.

The Honolulu Star-Advertiser reported Ramsey is trying to rally support for a measure to ban intentional killing of sharks that could be introduced in the statehouse later this month.