Accessibility links
'Mala Vida' Never Quite Gets Up To Speed Marc Fernandez' noir has fascinating elements — a crusading journalist, a trans detective, and the tragic real-life snatching of thousands of babies in Franco-era Spain — but ultimately falls flat.

'Mala Vida' Never Quite Gets Up To Speed

'Mala Vida' Never Quite Gets Up To Speed 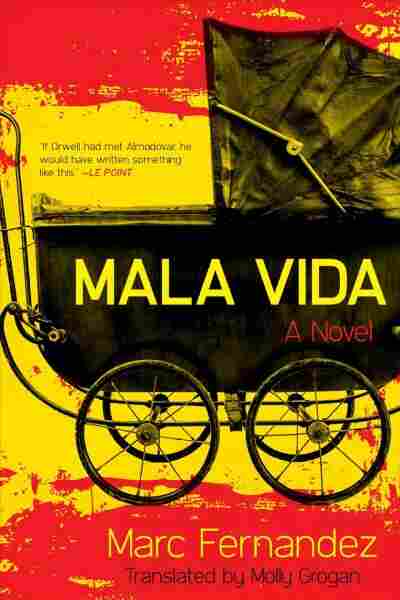 Mala Vida — a noir by Marc Fernandez, translated by Molly Grogan — is the kind of novel that should be like catnip for me. It has a radio journalist as one of the protagonists (my parents and my grandfather were in radio, if you want to score points with me, feature a radio cabin and you get an extra star), at one point one of the characters goes to a city I've visited (Valencia, during the festival of the Falles, where I hate to say I fell ill with food poisoning courtesy of a paella) and it offers an exciting premise (decades-long baby snatching).

Unfortunately, just like that sad paella which prompted a belly ache, this dish didn't sit quite right with me. I attribute part of the novel's issues to its stilted language, and I suspect some of it may be the translation's fault. I sense something has been lost here; the passages seem sterile, as though a pinch of salt might be required.

Not everything, however, can be blamed on the use of language. In the end, Mala Vida just feels very technical, like reading the ingredients of a recipe instead of sampling the dish, all the bits of the story fitting together in a not terribly exciting way, when this should be an explosive noir story of post-Franco Spain.

Diego, a radio journalist, becomes privy to a decades-long plot to steal the babies of left-wing activists. This is actually not a complicated Orwellian invention, as the jacket copy might have you believe; it's rooted in fact. Google "lost children of Francoism" and you'll discover thousands of abducted children. Interwoven with the stolen baby investigation is the tale of an assassin who is murdering several apparently unconnected people. Meanwhile, the Catholic Church might have a hand in all of this. Over tapas, and smoking a lot of cigarettes, Diego is going to find some answers.

'Amsterdam Noir' Finds Its Darkness Inside Us

Sounds good, right? Unfortunately, there is no sense of true danger. Sure, our protagonists are confronted a couple of times by a menacing person or receive a nasty message, but nothing comes of it. Characters make basic mistakes to further the plot quickly — such as not having passwords on their computers, in an era in which my iPad locks me out if I don't show it my thumbprint. The church even sends a bad guy who wears a very obvious cross. So much for stealth!

There's also an attempt at an obligatory romance which falls flat — at one point our intrepid journalist has met a beautiful lawyer, and although they haven't spent more than a few hours together, "her first instinct is to phone Diego, to hear the sound of his voice" when she barely knows the guy and they have no chemistry.

It's a pity, since the book does have potentially interesting characters: Ana, a brave trans private investigator, and an equally courageous judge who might get sacked if he looks too deeply into this baby snatching business. These are good people, fighting for truth, but alas they don't have much interior life, despite a flashback to the murder of Diego's wife and hints of Ana's difficult experiences in Latin America. More time, perhaps, was needed to flesh them out.

Francoist Spain, and the gaping wound left open in the wake of this fascist movement, are riveting material for a noir. Mala Vida, however, never gathers enough steam to fully immerse us in the pain and the horror of a country torn apart by old secrets.