Accessibility links
Our State Of Disunion: Will Delaying Trump's Big Speech Help End The Shutdown Too? After Trump's capitulation, the question remains: Does it make sense to gather all these people at once, largely to project a false sense of unity? Would it be better to have no show of unity at all? 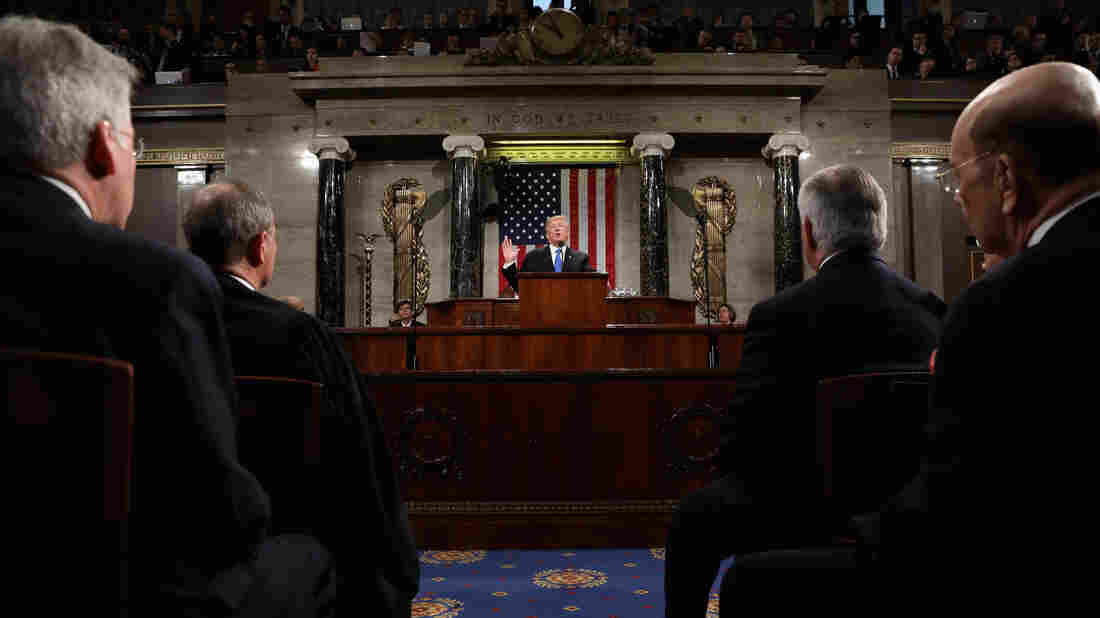 President Trump delivers the 2018 State of the Union address in the House chamber in Washington. Win McNamee/Getty Images hide caption 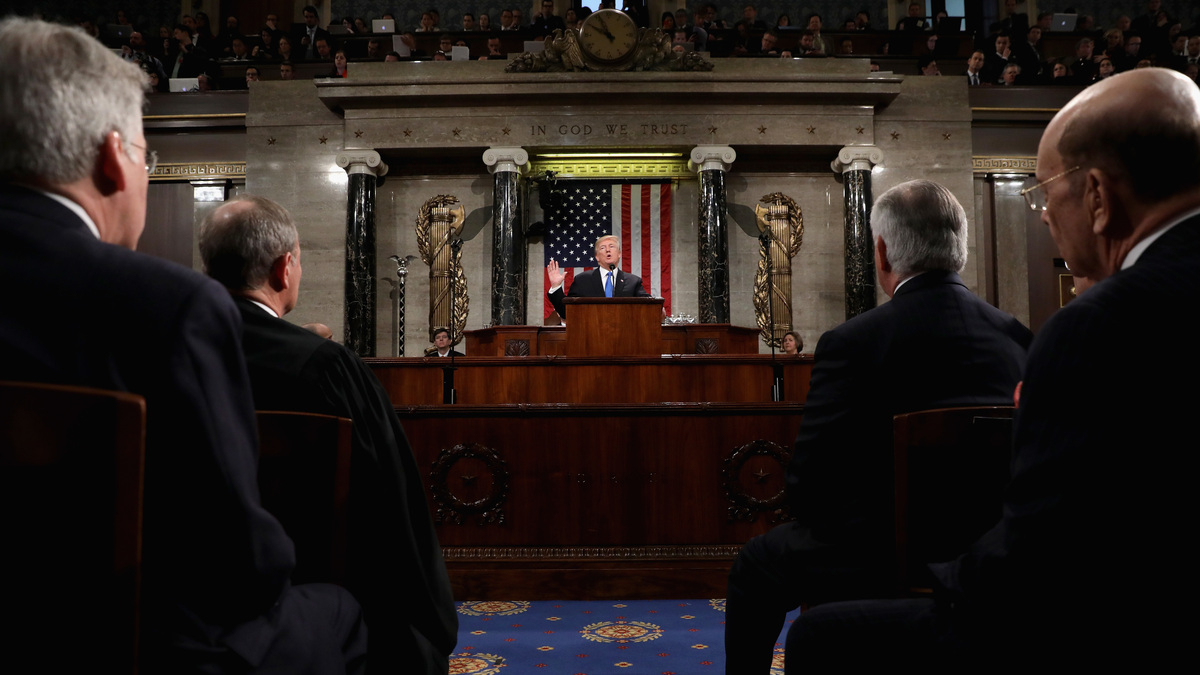 President Trump delivers the 2018 State of the Union address in the House chamber in Washington.

It was nearly midnight Wednesday when President Trump sent the tweet saying he would wait to deliver his "great" State of the Union speech until after the government is fully reopened.

That came as a relief to those who had taken seriously his threat to come to the Capitol on Jan. 29 as originally planned, with or without the blessing of House Speaker Nancy Pelosi, D-Calif. No sooner had Trump threatened to come ahead than Pelosi made clear just how unwelcome he would be, until the partial government shutdown was over.

Some had visions of Trump and a squad of Secret Service agents barging their way in, no doubt to the cheers of Republican members of Congress.

None of that was ever likely to happen. But the vision of it was dark, indeed. The fact is that the speaker can withhold House consent to the joint congressional resolution by which the president is empowered to speak. So barging in would be a breach of more than protocol.

Hours later, in that late-night tweet, the president backed down. Tensions eased. Some read that as a sign the stalled negotiations over homeland security (read: the president's desire for $5 billion in funding to build a wall or barrier on the border with Mexico) might be revived. By the end of Thursday, the Senate leaders of the two parties were talking to each other again.

But that was after test votes on the two parties' dueling proposals to reopen the government had failed on the Senate floor earlier in the day. The Democrats' plan attracted six Republican votes but still fell eight votes shy of the three-fifths majority required to advance the bill. The GOP alternative, based on the proposal Trump offered over the weekend, fell 10 votes shy and had the support of a single Democratic senator.

By Thursday evening, the White House was reported to be preparing language for a declaration of a national emergency, a tactic that had been mentioned before but that Trump has so far chosen not to pursue.

It's hard to find anything good to say about a government shutdown — especially the longest one in U.S. history. But at least we all know more now about something we all took for granted: the president's annual State of the Union speech to Congress in the Capitol.

The only thing required by the Constitution (Article II, Section 3) is that the president "shall from time to time give to the Congress Information of the State of the Union and recommend to their Consideration such Measures as he shall judge necessary and expedient."

That's it. Rather vague, as are many parts of the Constitution, which was, after all, a series of compromises among negotiators who were suspicious of each other and suspicious of government in general.

Much of what we assume about this giving of "Information" has been established by custom. President George Washington decided a report each year made sense, and he also gave the first SOTU to Congress in person in 1790 in Federal Hall in New York City, the seat of the fledgling U.S. government at the time.

Washington's in-person delivery was continued by his successor, John Adams. But in 1801, the third U.S. president, Thomas Jefferson, decided the in-person speech was not for him. Jefferson disliked the similarities between this address and the manner in which the king of England in those days addressed opening sessions of Parliament to deliver his marching orders. (Some say Jefferson also disliked his own public speaking voice.)

In any event, the custom of a written speech took hold and prevailed for more than a century. It was not until Woodrow Wilson arrived in 1913 that the notion of in-person delivery was revived.

Wilson was a progressive Democrat and Princeton professor who apparently liked the idea of getting up to lecture in front of Congress. It was his improvement on the example of Theodore Roosevelt, who several years earlier had begun making the annual address a muscular agenda — rather than just a rundown on what was happening around the government.

So, just maybe, a delay makes sense now with the government partially shut down. (We had one in 1986 after the space shuttle Challenger blew up.)

Or, just maybe, having this annual shindig "just the way we have always have had it" does not make sense anymore.

There is a growing sense in America that old ways of doing things do not always make sense anymore. That applies to the way we go shopping or go to the movies or go to school, all of which we can do now without going anywhere.

So what about this thing, the SOTU? Is it something everyone really has to physically attend, or is there an adaptation available? Could this annual monster meetup near the National Mall just, well, go away?

Would we miss the hour-plus of speechifying and unspontaneous ovations from one side of the aisle or the other? Would we be the poorer without those hours of pregame and postgame punditry?

To be sure, something would be lost if the one truly bipartisan, bicameral, multibranch and multi-everything confab of the year disappears from the nation's capital.

But, for roughly half of our history, this ritual did not require anyone to go anywhere.

For more than 100 years, it was understood that a president's annual report to Congress would be a written document sent up to the Capitol. That's how things were from the time of Jefferson in the beginning of the 19th century until Wilson's arrival early in the 20th century.

Due to ill health, Wilson went back to mailing it in for the last two years he was president. Warren Harding did two SOTU addresses in person before dying in office. Calvin Coolidge gave his first in 1923 in person and allowed it to be broadcast on the radio. Then Coolidge went back to the written report, which Herbert Hoover also favored.

But starting with Franklin Roosevelt, the full value of the SOTU was appreciated and expanded upon. FDR used it to proclaim his "four freedoms," LBJ to announce his war on poverty and Richard Nixon to say "one year of Watergate is enough."

In the 1930s, the radio microphone became a fixture, followed by one for TV in 1947. And the presumption took hold that the president was addressing not only Congress but an entire nation — listening and watching on an ever-expanding array of electronic devices.

The SOTU itself has become a kind of electronic device and one of the most powerful a president has.

Over the years, there must have been times when Capitol Hill leaders wished they could lift that powerful device deftly from the hands of the president and put it on a shelf. But even those speakers of the House most at loggerheads with a president have felt they had to issue the routine invitation and sit there and take it. To do otherwise would have been unthinkable.

So what will happen next?

Thursday the president said basically it's up to Pelosi. "It's really her choice," Trump said, "I would have done it in a different place but I think that would be very disrespectful to the State of the Union — to pick some other place. I could have done it. I could have gone to a big auditorium and gotten 25,000 people in one day."

House Republican leaders had speculated last week that another venue on the Hill (like the GOP-controlled Senate chamber) might be found anytime the president of the United States wishes to speak. And surely that's true. And this week Trump received multiple offers from GOP governors who offered up their statehouses as alternative sites.

But does it make sense to do this speech at this time in any other place than the House floor? Or — as Trump seemed to concede this week in bowing to Pelosi — does a change from the traditional venue sap too much of the tradition, glory and grandeur?

And as long as we are asking questions, let us return to one posed a moment ago: Does it make sense to gather all these people at once the way we do, largely to project a false sense of unity?

Perhaps the best answer is another question: Would we be better off with no national show of unity at all? 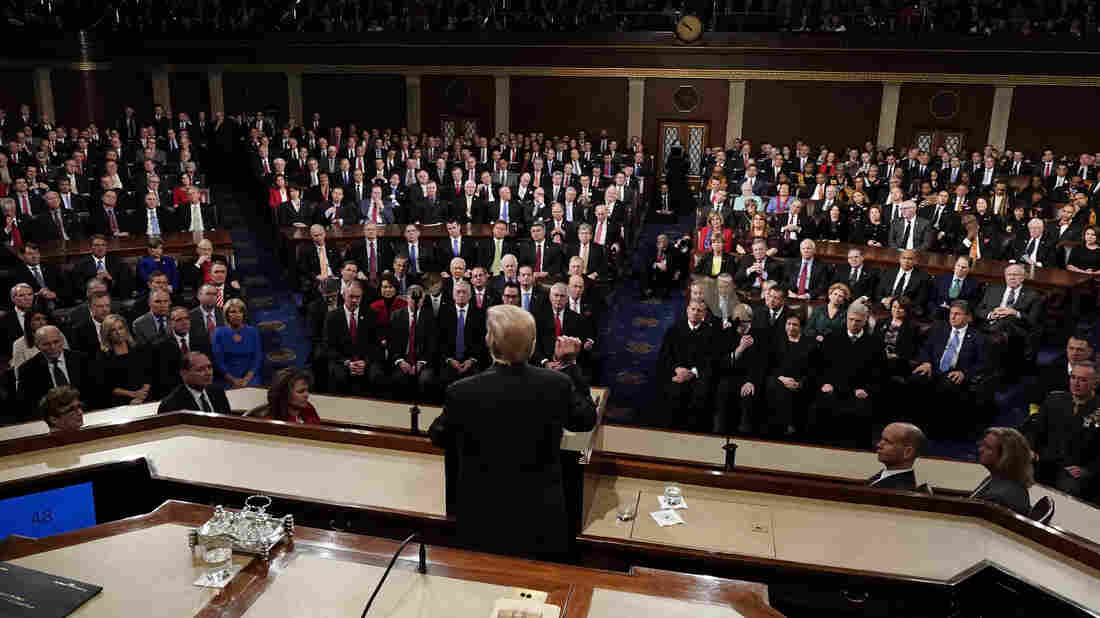 President Trump delivers his State of the Union address to a joint session of Congress on Capitol Hill last year in Washington. Pool/Getty Images hide caption 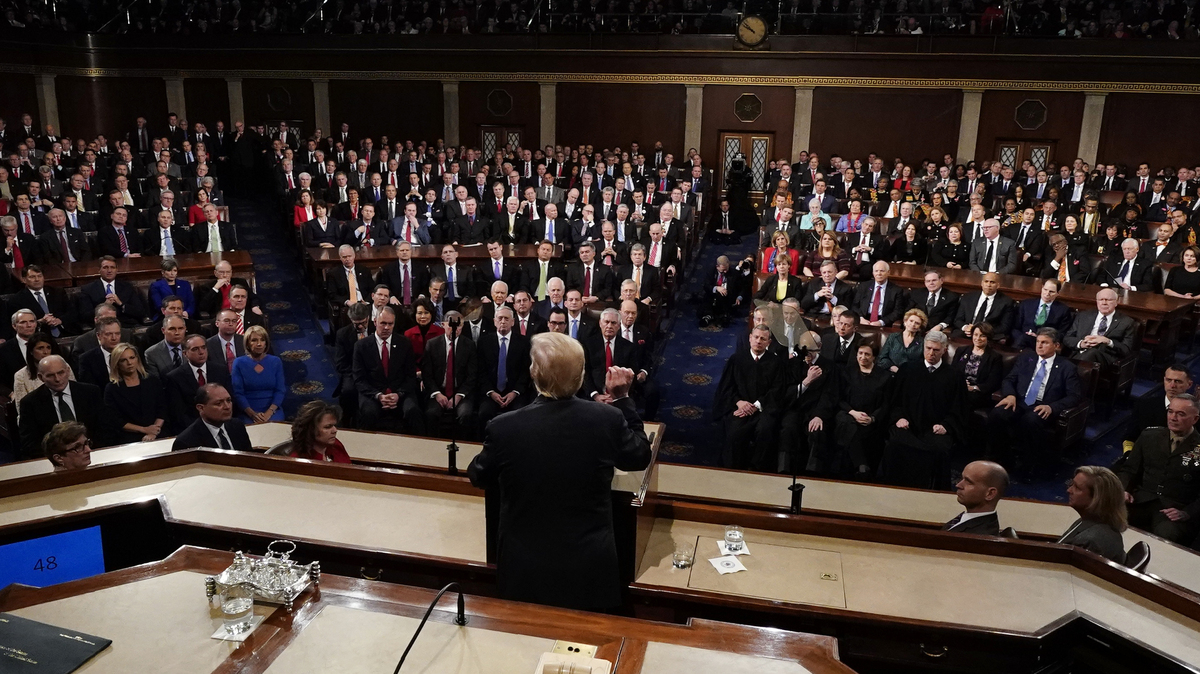 President Trump delivers his State of the Union address to a joint session of Congress on Capitol Hill last year in Washington.

In a previous version of this story, we misspelled Nancy Pelosi's last name as Peloi and Herbert Hoover's first name as Hebert.