Accessibility links
Opinion: Leaving Syria Is Far Less Risky Than Staying ISIS may not be defeated, but the U.S. is right to withdraw from Syria, argue Aaron David Miller of the Woodrow Wilson Center and Richard Sokolsky of the Carnegie Endowment for International Peace. 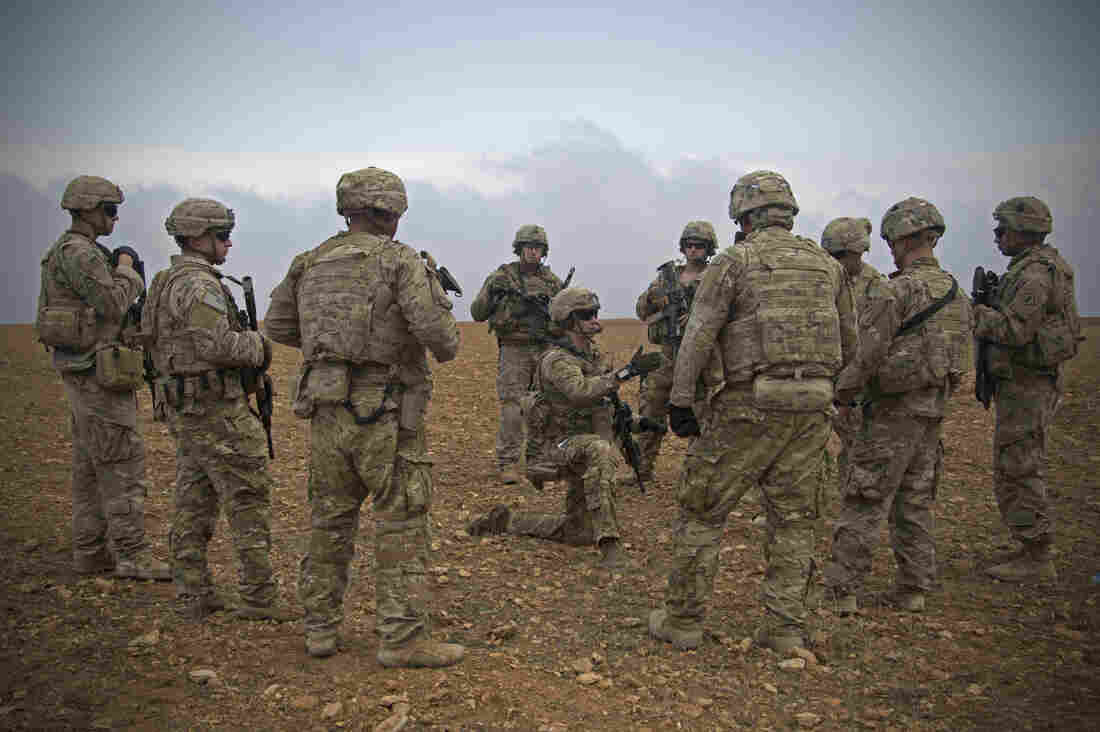 In this Nov. 7, 2018, photo released by the U.S. Army, U.S. soldiers gather for a brief during a combined joint patrol rehearsal in Manbij, Syria. Spc. Zoe Garbarino/U.S. Army via AP hide caption 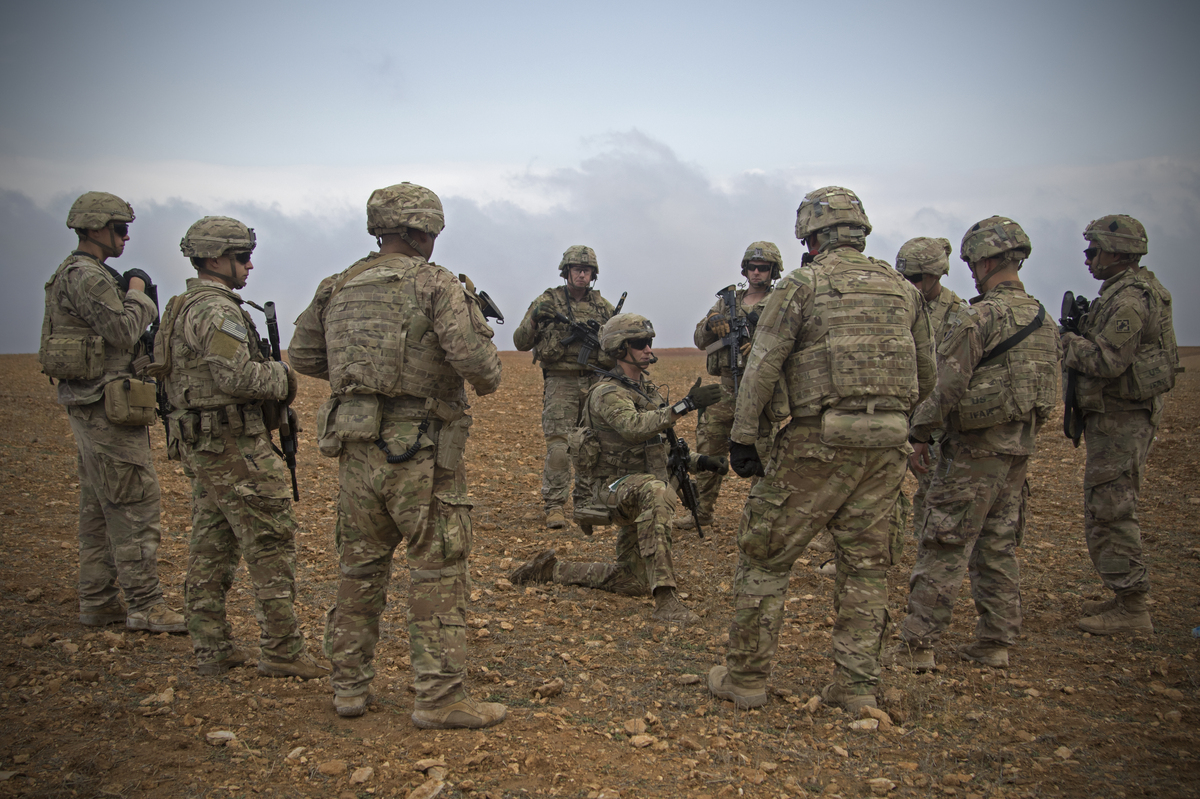 In this Nov. 7, 2018, photo released by the U.S. Army, U.S. soldiers gather for a brief during a combined joint patrol rehearsal in Manbij, Syria.

Aaron David Miller (@aarondmiller2), a vice president at the Woodrow Wilson International Center for Scholars and a former State Department adviser and Middle East negotiator, is the author of The End of Greatness: Why America Can't Have (and Doesn't Want) Another Great President.

Richard Sokolsky, a nonresident senior fellow at the Carnegie Endowment for International Peace, was a member of the secretary of state's Office of Policy Planning from 2005-2015.

The reported ISIS suicide attack last week that claimed the lives of four Americans clearly shows that the Islamic State — contrary to the exaggerated claims of President Trump and other administration officials — is far from defeated. The attack has also prompted many in Congress and the foreign policy community to express outrage and to call on the president to reverse his decision to withdraw U.S. forces from Syria. They are pressuring the administration to remain in the country until ISIS is permanently crushed.

That would be a mistake. The decision to leave Syria is the right one, and the withdrawal should proceed in a safe, orderly and coordinated fashion. Leaving 2,000 troops there without clear and coherent objectives, and the means to achieve them, is a prescription for continued trouble — and for more unnecessary American casualties.

By the sound and fury of the political reaction in Washington, you might think Trump's decision to withdraw from Syria was akin to Prime Minister Neville Chamberlain's appeasement of Nazi Germany. Sen. Marco Rubio described the withdrawal as "a major mistake" that would "haunt the administration." Sen. Ben Sasse opined that Trump's generals "believe the high-fiving winners today are Iran, ISIS and Hezbollah." Sen. Lindsey Graham all but linked Trump's decision to this week's ISIS suicide attack. All three congressmen are members of the president's Republican Party. Just about everyone in the foreign policy establishment accused the president of betraying the Kurds who had been doing most of the fighting against ISIS.

There are risks in departing Syria, but there are far greater ones in staying. That's particularly true if the U.S. cannot achieve the goals it has set publicly, and if Russia, Iran and Syrian President Bashar Assad's regime continue to have their way. Paradoxically, staying in Syria under these circumstances can make America look weak, too.

The Trump administration — like its predecessor — talks loosely about defeating or destroying the Islamic State. By intensifying the anti-ISIS campaign of the Obama administration, the Trump administration has indeed decimated the proto terror state that considers itself a caliphate, leaving it with less than 1 percent of the area it once controlled in Iraq and Syria. ISIS isn't Germany or Japan, where the U.S. and its allies broke those regimes' will to fight, destroyed all their war-making capacity, eradicated their fascist state ideologies and helped reshape a new environment for two democratic countries. For the U.S. to achieve that goal in Syria is mission impossible. Indeed, only Syrians can ultimately defeat ISIS and the al-Qaida-linked groups that feed on the sectarian grievances, corruption and poor governance that continue to power the jihadis. This would require a new Syrian state, which is clearly beyond America's capacity to produce, particularly as the Alawite Assad regime and its Iranian and Russian backers continue to alienate Sunni Arabs. Defeating ISIS is by and large a political, governance issue. Keeping U.S. forces in Syria with the expectation of crushing the ISIS insurgency makes little sense.

The agenda of Kurdish forces in northeastern Syria — controlled by the Kurdish People's Protection Units, or YPG — is no mystery: They wish to establish an autonomous enclave where they can run their affairs without outside interference. This aspiration pits them against the Turkish government, which views the Kurdish forces in Syria as close allies of a Kurdish separatist movement in Turkey and considers both as terrorist organizations; the Assad regime, which seeks to reassert its control of the resource-rich areas under Kurdish control; and Iran, which also faces Kurdish separatists at home and fears that Kurdish autonomy in neighboring Syria might embolden these forces to seek independence.

The relationship between U.S. troops and the Kurdish forces in northeastern Syria was always a transactional and tactical marriage of convenience. America had no other reliable local partners to destroy ISIS and has used Kurdish fighters for this purpose. The Kurds were using U.S. military and diplomatic support to strengthen their self-defense capabilities against their foes and to gain leverage over the Assad regime to secure a more favorable position. The U.S. has never committed to help the Kurds establish an autonomous zone in northeastern Syria. This contested area is a witch's brew of Syrian, Turkish, Iranian, local Arab tribes and the remnants of ISIS. The longer the U.S. maintains its military cooperation with the Kurds, the greater the risk that U.S. forces get sucked into these feuds and potentially come to blows with NATO ally Turkey.

We can't compete with Russia or Iran

The U.S. military likes to talk about shaping the battlefield to achieve a victory. Yet the Syrian battlefield is not at all level. The U.S. lacks the interest, the will, the capacity and resolve to even the odds with Russia and Iran with a major U.S. commitment of military assets and economic resources there. Syria's future means far more to these two other countries than it does to the United States. They both have major allies and assets on the ground that outmatch what the U.S. would deploy there, and Moscow and Tehran are willing to absorb much higher costs to achieve their preferred outcomes. The influence, interests and their decades-long relationships with the Assad family give them skin in the game. Add Turkey, which shares a contiguous border with Syria and an existential stake in controlling the Kurds, and you can see why Washington is the junior partner in the game of influence in Syria.

One reality is obvious after surveying the wreckage of a decade of U.S. policy in Syria. The Obama and Trump administrations, Congress and the American public, particularly in the wake of endless wars in Iraq and Afghanistan, have not seen fit to elevate Syria to the level of a vital national interest worth expending the lives and resources commensurate with that kind of commitment, on part with Russia and Iran.

Faced with a powerful humanitarian and security disaster as the Syrian civil war hemorrhaged refugees and terrorists, Washington could not sit still, so it adopted half measures that exceeded its capacity to deliver. These included humanitarian assistance, support for a United Nations political process, modest troop deployments and air and drone strikes, and bravado — such as Assad must go, expel every last Iranian boot, ISIS will be defeated.

With no political support at home, outmaneuvered by Iran and Russia, and no real will to make a major commitment, Washington stood little chance of altering the political or battlefield balance. What seems to have finally dawned on an already risk-averse Trump administration is the painful but necessary realization that the standard for success in Syria has never been could we win, but when could we leave.