Accessibility links
Interview: Amanda Sthers On 'Holy Lands,' Reconciliation And Israeli Pig Farms The epistolary novel from author Amanda Sthers, newly available in English and now adapted into a feature film, is a story of reconciliation (and raising swine among Jews). 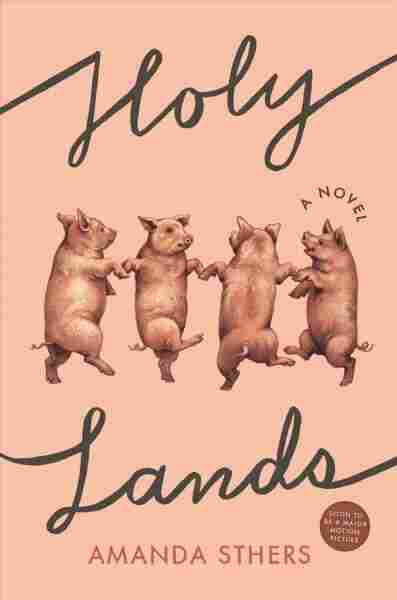 In Holy Lands, Harry Rosenmerck, an aging cardiologist, has left New York and his medical practice to move to Israel — to raise pigs.

His ex-wife, Monique, is battling illness. Their son David has been estranged from Harry since he came out. Their daughter Annabelle is heartsick in Paris. And his rabbi is appalled.

"I think it's kind of a provocation to God," says author Amanda Sthers. "And he's also running away from reality, which is that he got a divorce from his wife, and he also is running away not to see his son being a homosexual. And it's about his limit of tolerance. He thinks he's very open-minded, going to Israel and raise pigs, and at the same time, he can't accept that his son is married to another man."

Harry does not believe in phones, email, text messages, Facebook or WhatsApp. So the family quartet and Harry's rabbi rely on letters.

The story that goes back and forth in those letters is told in a novel, out soon in English. Sthers, who was born in Paris and first wrote the novel in French, has also directed a film adaptation of Holy Lands starring James Caan and Rosanna Arquette.

On the pig farming business in Israel

Well, actually, there's a real business in Israel. And this is how it all started. I read an article in a very serious French newspaper explaining how to raise pigs in Israel. And I found the paradox hilarious, of course. And for once, Muslims and Jews are agreeing on something — or more precisely, against the same thing. So in the novel, it's a great starting point to create very strong animosity against the rabbi. And this is the first letter: Will you stop and take those pigs away? ...

There's a lot of rules to actually raise pigs in Israel. You must raise them on wood, so they won't touch the holy ground, and they must be kind of hidden. So I went there to visit and to how to understand how it happened, and I had a fixer, because you don't know where they are actually — you have to find ways, you don't have to use a camera. It looks like going on a war zone.

Well, I think it's same when you look at religions. It's contradictions. Most religions are serving love, and want people to be loved in any ways, and don't accept homosexuality — like, most of the religions. So he's just the incarnation of: What do we do about those contradictions? And he's fighting against also the idea he has of what his son is going to become. We all have this image of what we wish for our children, myself included. We all imagine a destiny for them. And then we have to face the truth, and keep on loving them with lots of different ways of living their lives.

On Harry's evolving friendship with the local rabbi

This is how, I think, you truly love someone, is to understand how he looks at life, even if it's completely different than yours. And I think what brings them together is that they're both very intelligent people. And it's not about being wrong or right — it's about trying to understand that maybe there's other ways to see life.

And I think it's really a metaphor about what is going [on] in Israel between Palestinians and Israelis. Of course they're like cousins that are in a fight, and they don't really remember who started [it]. And they are both right, in a way. I mean, if you hear an Israeli saying we have this wall because there were too many terrorist attacks and we are afraid, and we have to protect ourselves, and this is a wall of protection, you would say: Well, it's fair. And on the other side, if you hear a Palestinian saying this wall is segregation, it's humiliation, it's hard for me to me to get to work every morning, I have to show my papers and my grand-grand-grandparents were living there: You can hear his point too. And this is what this book is about. It's about reconciliation, and it's about trying to see the world with another pair of eyes. And this is friendship.

On re-writing the book in English and making the film

Actually, I wrote this book 10 years ago in French. And I was living in Los Angeles — I said, well, I wanted my friends to read it in English. And they told me: Well, you should get it published. And this is how it all started — just wanted to share the story more and more. Because in France, it was a huge success. And people had fun, but it's also a very moving novel, I think. And what was the strongest thing for me was people telling me, you know, when I closed the book, I took my phone and I called the people I loved to tell them before it was too late. Because it's a book about what's left unsaid, and about tolerance, and how you can make a step toward the other people in your family. And it's really reconciliation in the big picture, but also in the family.

And then the motion picture was a big surprise. I didn't imagine I could cast those huge names. Working with Jimmy Caan of course was one of the best experiences in my life, and Rosanna Arquette was my fantasy. So I feel like I'm blessed and very happy to be able to share it with you now.

Monika Evstatieva and Viet Le produced and edited this interview for broadcast. Patrick Jarenwattananon adapted it for the Web.

Read an excerpt of Holy Lands