Accessibility links
'Unmarriageable' Sets 'Pride And Prejudice' In Pakistan You may not think the world needs another retelling of Jane Austen's classic, but Soniah Kamal's Unmarriageable has an undercurrent of social and political commentary that makes it a worthwhile read. 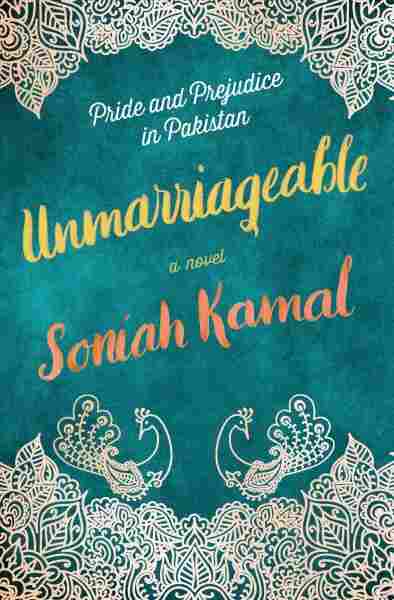 Jane Austen's Pride and Prejudice has been retold endlessly by now, from the numerous film, TV, and YouTube adaptations of the original novel to the many, many books that use its structure, characters, and story arc to do something different. P&P has been adapted into a zombie story (Pride and Prejudice and Zombies by Seth Grahame-Smith), a mystery (Death Comes to Pemberley by P. D. James), a tale of a contemporary 30-something English spinster (Bridget Jones's Diary by Helen Fielding). Not to mention the gender-swaps (Pride and Prejudice and Mistletoe by Melissa de la Cruz), the queer retellings (Gay Pride and Prejudice by Kate Christie), and the young adult versions (Sasquatch, Love, and Other Imaginary Things by Betsy Aldredge and Carrie DuBois-Shaw). The point is, there's a lot of them. So why read another?

Well. Soniah Kamal's new novel, Unmarriageable, is billed as "Pride and Prejudice in Pakistan" and it is that, certainly. Here Elizabeth Bennet becomes Alysba Binat and Fitzwilliam Darcy becomes Valentine Darsee, which Kamal finds a neat explanation for: "The Darsees descended, Mrs. Binat announced, from darzees—tailors—and at some point their tradesmen surname of Darzee had morphed into Darsee, or else, she suggested, squinting, an ancestor must have deliberately changed Darzee into Darsee on official certificates." This glimpse into the ways names are changed over time in order to elevate social status away from menial labor is especially relevant, since so much of the prejudice that occurs in the book is based on familial ties and class: Slander follows Mrs. Binat about her grandmother being a low-class sex worker; Darsee, of course, is made to seem like a monster who cut Wickaam out of the will.

In general, the plot of the novel is pretty much the same as Austen's, with the addition of Pakistani traditions and the bells and whistles of the new millennium, so you know what's going to happen. In this way, Unmarriagable seems at first glance like a par-for-the-course retelling, and for readers simply looking for a fun twist on the classic English novel, it's entirely possible to read it that way and enjoy the sumptuous descriptions of clothing and food as well as the will-they-won't-they love affairs.

But if you're tempted to look further, as I was, you'll find a cheeky undercurrent that echoes Austen's novels' ability to work on two levels. As with Austen, whose books could be read as fun and simple romances or acerbic examinations of class and women's choices (and lack thereof), Kamal's Unmarriageable succeeds in being both a deliciously readable romantic comedy and a commentary on class in post-colonial, post-partition Pakistan, where the effects of the British Empire still reverberate. At times, the commentary is veiled, as when Alys first meets her next-door neighbor friend, Sherry, who tells Alys disapprovingly that her Urdu is very poor (Alys can't read Urdu, and relies on translations), or when Kamal opens a chapter with this witty remark: "The clinic was an excellent facility, as all facilities that cater to excellent people tend to be, because excellent people demand excellence, unlike those who are grateful for what they receive."

'Unmarriageable' manages to be both a fun, page-turning romp and a thought-provoking look at the class-obsessed strata of Pakistani society.

At other points, however, the commentary is clear, occasionally voiced by the characters themselves — as when Alys tells Darsee that "a book and an author can belong to more than one country or culture. English came with the colonizers, but its literature is part of our heritage too, as in pre-partition writing." A little later, when Alys is talking to the charming though duplicitous Wickaam, she says: "I wrestle with how to incorporate history. Can any amount of good ever merit the interference of empire? Do we never speak English again? Not read the literature? Erasing history is not the answer, so how does a country put the lasting effects of empire in proper context? Not deny it, but not unnecessarily celebrate it."

By writing this novel, Kamal seems to be trying to answer this question; she clearly loves Austen, and sees her class-based dramas mirrored in Pakistani culture. In Unmarriageable, she enriches those dramas for readers with lavish descriptions of the bounty and beauty of local clothing fashions, meals, and landscapes. While at times the dialogue is heavy-handed, ultimately Unmarriageable manages to be both a fun, page-turning romp and a thought-provoking look at the class-obsessed strata of Pakistani society.