Accessibility links
Federally Funded Companions Keep Seniors Connected To Their Neighbors Isolation is a part of life for many seniors, but a national program helps curb the loneliness by pairing homebound residents with peers, who make weekly visits. 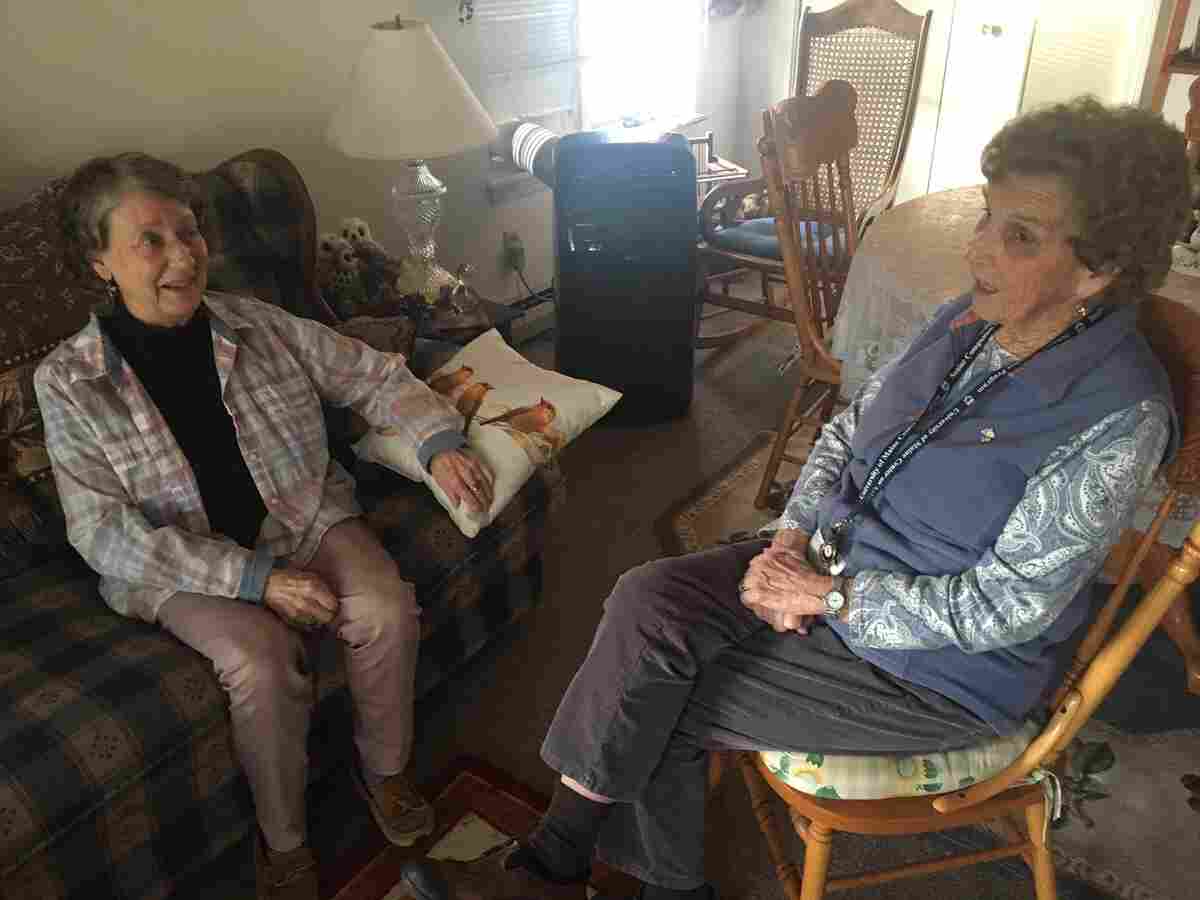 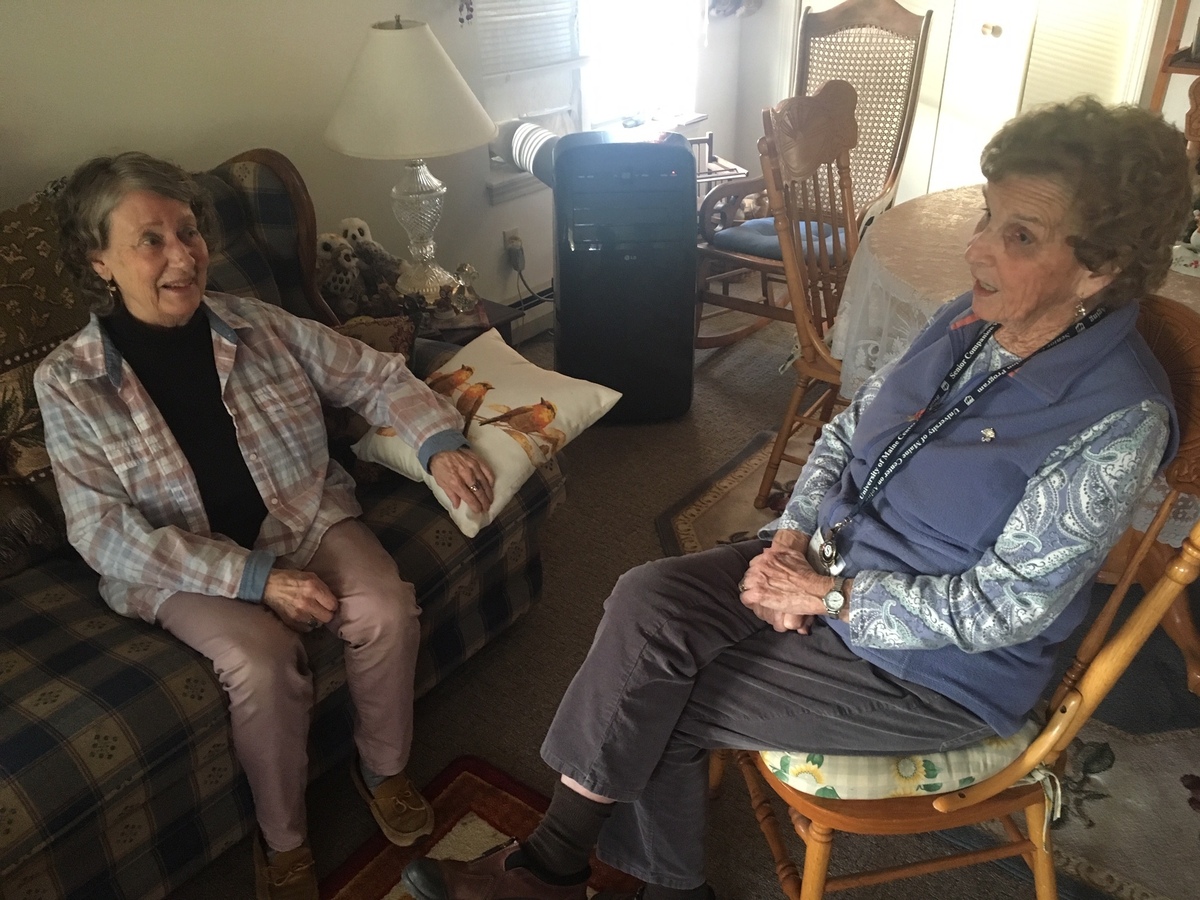 Isolation is an issue for many seniors, especially in rural places. It can lead to loneliness, which many experts consider a serious public health issue.

That's where Kitty Gee comes in.

Gee, a spry 87-year-old lives in western Maine, which is known for having picturesque rural mountain landscapes and an aging population. Five years ago, she decided to join a federal grant program that combats senior loneliness the old fashioned way: by sending visitors door to door.

The Senior Companions program has operated for decades in nearly every state, connecting isolated seniors to a friendly visitor every week. To qualify as a senior companion, volunteers must be at least 55 years old and serve between 15 and 40 hours a week.

The program is popular in Gee's home state, where the population is projected to have more senior citizens than young people by 2020. Around 600 seniors receive the service in Maine, and more than 300 are on the waitlist.

As a senior companion, Gee makes house calls to seven clients each week — collectively totaling to around 25 hours.

She gets a federal stipend of $2.65 an hour, but also gains something priceless from the visits: a purpose.

She decided to join the program after her husband died, and she needed something meaningful to invest her time.

"So I said, this will get me out among people, I'll have someone to talk to, and maybe I'll do some good," Gee told Maine Public Radio.

One of the clients she visits is 74-year-old Wanetta Nurse, who lives in Farmington, Maine. Though Nurse is 13 years Gee's junior, she has health issues that make it hard for her to walk, or even to pursue former hobbies like knitting and sewing.

They've known each other for two years. Quickly the conversation turns to upbeat topics: family, the good old old days, and men.

"I've been trying to find a dancing partner. Hard to find," Gee tells Nurse. "Because ya know, people our age, they don't want to do much, ya know? And you and I, we're ready to roll. We want to get moving."

These visits give Nurse something to look forward to, and someone with whom she can laugh.

"Sometimes she's laughing so hard," Nurse said. "It's just so nice to see someone laughing. And to be included in that too. It means a lot."

This type of connection is essential for the state's aging population, said Kerry Faria, a community services specialist at the local non-profit Seniors Plus, which partners with the University of Maine to implement the Senior Companion program.

"Many times people will end up isolating themselves because their friends are dying around them. Their family, maybe their siblings have died off," Faria said. "They may be the only one left out of their generation. So they just find themselves kind of alone."

As Maine's population ages, demand is likely to increase, Faria said, but the waitlist isn't likely to shrink because the program's funding is capped.

The program is always on the lookout for new volunteers, particularly men.

Bud Houghton, a former logger from Carthage, Maine, jumped at the chance to become a Senior Companion when he retired. 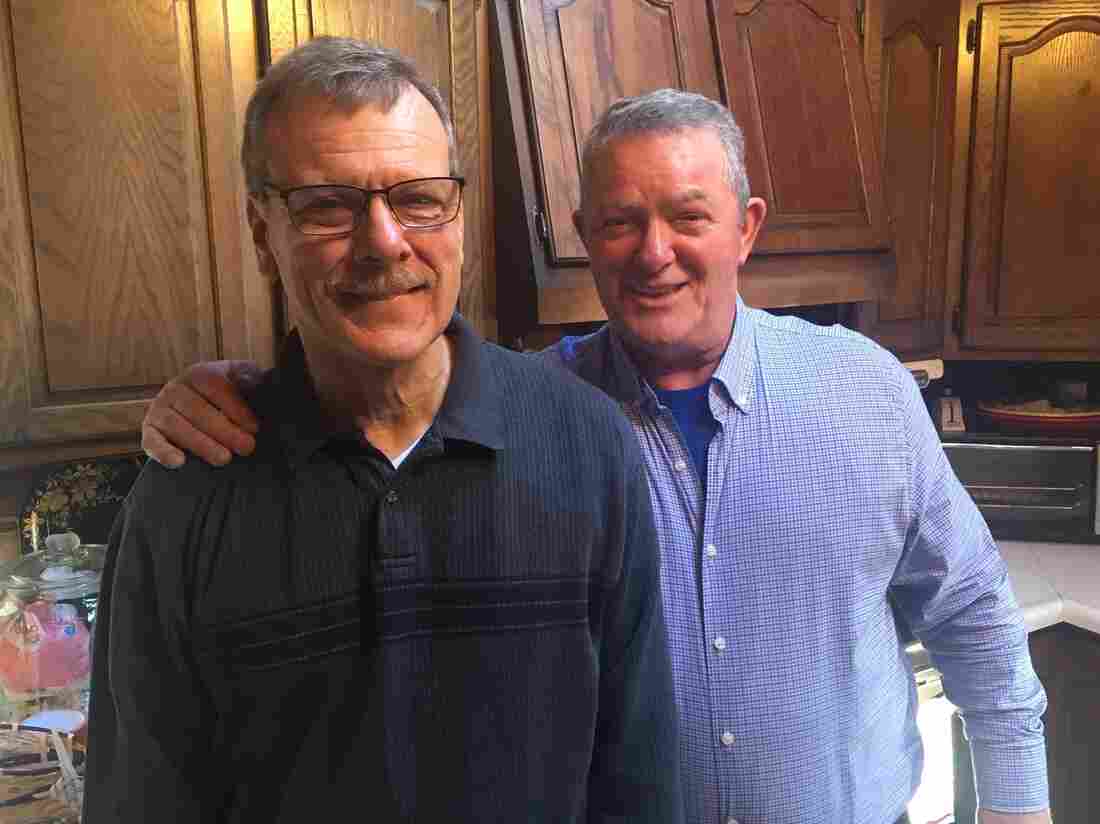 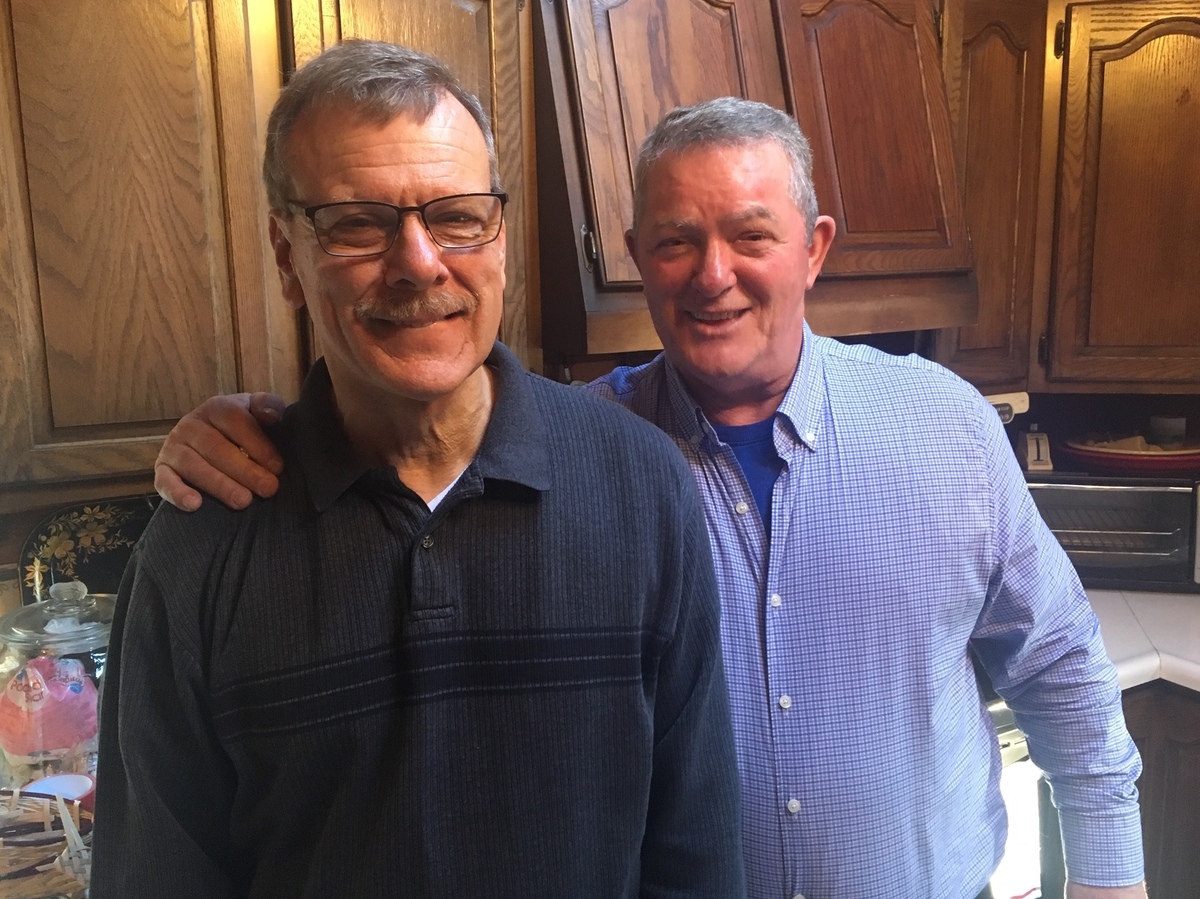 Senior Companion Bud Houghton (right) visits his client Bill Gates to take him out for a drive.

Now 66 years old, Houghton had started volunteering in a different program when he was 40. The first program he volunteered with helped seniors apply for fuel assistance, and gave him an appreciation for working with seniors.

"I love the older people. They need that friendship," he said. "They need that companionship. You are their ticket to the outside world."

Houghton likes to take one of his clients, 61-year-old Bill Gates, out on drives to scenic outlooks. Gates has dementia. Houghton's visits help give Gate's wife some respite while also providing companionship.

It's not always easy to be a companion, Gates said. He's witnessed clients deteriorate. Some have passed away. But these relationships, he said, are deeper than his other friendships.

As the pair winds along the roads of western Maine, they pass snow-covered trees, then tree-covered mountains. Gates starts to hum a familiar tune — "Silent Night." The humming, backed by the low rumble of the car, sounds peaceful, even haunting, but not lonely.