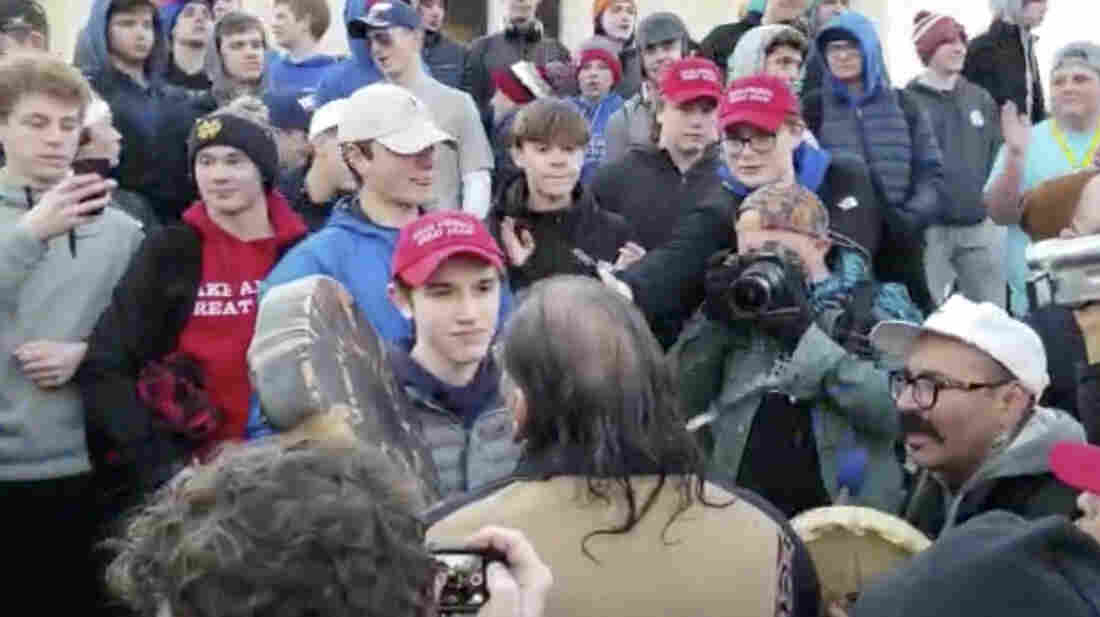 A student wearing a "Make America Great Again" hat stands in front of a Native American singing and playing a drum in Washington on Friday. Young men and women surrounded Nathan Phillips, and a video of the incident has drawn outrage. AP hide caption 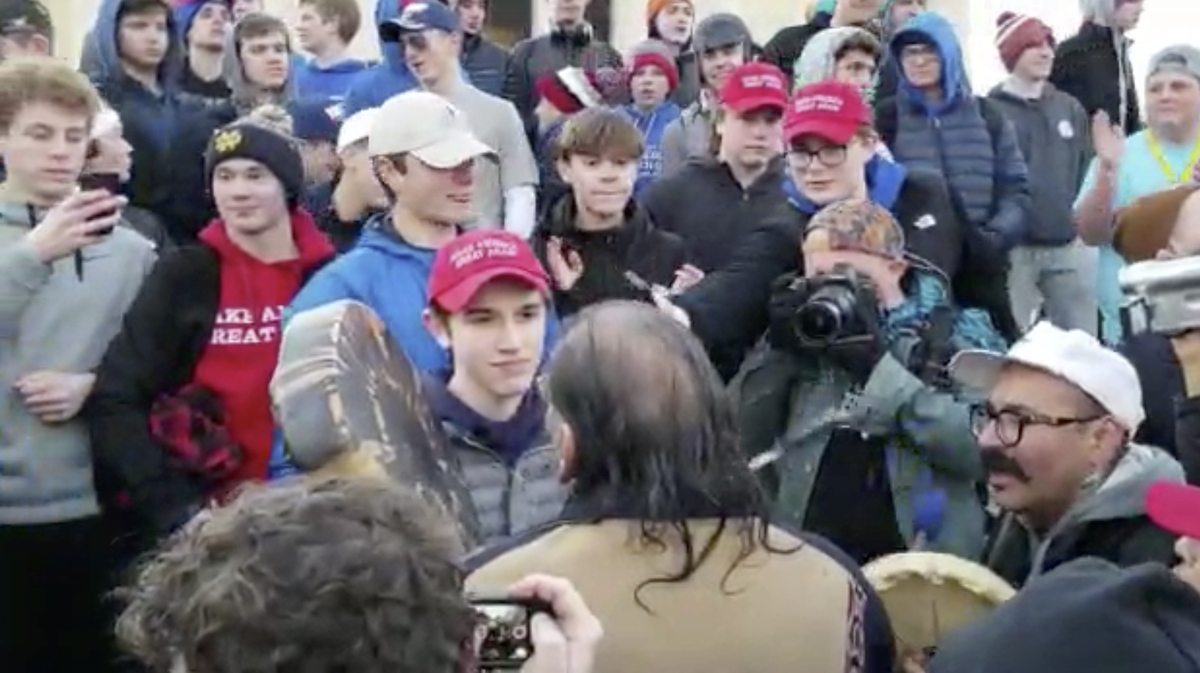 A student wearing a "Make America Great Again" hat stands in front of a Native American singing and playing a drum in Washington on Friday. Young men and women surrounded Nathan Phillips, and a video of the incident has drawn outrage.

A crowd of students surrounds the Native American man, laughing and filming on cell phones. One boy, wearing a red Make America Great Again hat, stands just inches away from the man's drum, staring at him with a wide smile.

The jeers of the students – and Phillips' stoic response – were captured in a video that has sparked widespread criticism and drawn an apology from a Kentucky prep school and diocese.

The students and Phillips had both converged in Washington, D.C., last Friday. The students, a group of boys from Covington Catholic High School in Kentucky, were there to attend the March for Life. Phillips had come for the first-ever Indigenous Peoples March, on the same day.

Videos show a number of young men and women, predominantly white, jumping, cheering and chanting, in a dense circle around Phillips. Many are wearing Trump paraphernalia, and some are wearing clothing associated with the Covington high school.

"I heard them saying, 'Build that wall, build that wall,' " Phillips says in another video posted to social media, wiping away tears. "This is indigenous lands. You know we're not supposed to have walls here. We never did, for millenniums, before anyone else came here. We never had walls."

Covington Catholic High School, a private, all-male school located in Park Hills, Ky., issued a joint statement with the Diocese of Covington on Saturday, condemning the incident and saying it would investigate and "take appropriate action, up to and including expulsion."

"We extend our deepest apologies to Mr. Phillips," the school wrote. "This behavior is opposed to the Church's teachings on the dignity and respect of the human person."

On Sunday afternoon, a student identifying himself as Covington junior Nick Sandmann, released a statement to CNN in which he said he was the teen at the center of the video and that Phillips "approached me, coming within inches of my face."

"I never interacted with this protestor. I did not speak to him. I did not make any hand gestures or other aggressive moves," the statement read. "To be honest, I was startled and confused as to why he had approached me. We had already been yelled at by another group of protestors, and when the second group approached I was worried that a situation was getting out of control where adults were attempting to provoke teenagers.

"I believed that by remaining motionless and calm, I was helping to diffuse the situation."

Phillips is a well-known Native American activist who reportedly also is a former director of the Native Youth Alliance. He served in the Marine Corps Reserve during the Vietnam era, according to Pentagon records.

He was singing the American Indian Movement anthem in front of the Lincoln Memorial, at the close of the march, The Washington Post reports. He says March for Life rally participants had taunted the indigenous crowd.

He told the Post he felt threatened and that the boys swarmed around him.

The incident drew condemnation from Native Americans and lawmakers. Darren Thompson, an organizer for the Indigenous Peoples Movement, which coordinated the march, said in a statement that the incident was "emblematic of the state of our discourse in Trump's America," echoing sentiments on social media and among organizers that the current administration's rhetoric has emboldened acts of harassment and racism.

"It clearly demonstrates the validity of our concerns about the marginalization and disrespect of indigenous peoples," Thompson wrote.

Another spokesperson for the march, Chase Iron Eyes, also placed the blame on President Trump.

"Conservative people are fearful now," he said, referencing the recent elections of the first two Native American women to serve in Congress, Deb Haaland and Sharice Davids. "Trump has riled up a reactionary voting block that reminds us that we are a nation founded on patriarchy, genocide and racism."

Haaland, who was elected to the House of Representatives last fall, also condemned the incident.

"This Veteran put his life on the line for our country," the Democrat from New Mexico wrote on Twitter. "The students' display of blatant hate, disrespect, and intolerance is a signal of how common decency has decayed under this administration. Heartbreaking."

Covington Mayor Joe Meyer, a Democrat, said footage was not representative of the core values of his town. "Videos of the confrontation are disturbing, discouraging, and — frankly — appalling," he wrote in a statement. "And they are rightfully inspiring a tidal wave of condemnation."

Organizers added that the march encompassed more than just that viral moment.

"The good news is, that connection to the sacred may have resonated with some of the Catholic youths," said Nathalie Farfan, another organizer, in a statement. "What is not being shown on the video is that the same youth and a few others became emotional because of the power, resilience and love we inherently carry in our DNA. Our day on those steps ended with a round dance, while we chanted, 'We are still here.' "

The march stemmed from the 2016-17 protest at Standing Rock over plans for an oil pipeline to cross Sioux Lands in North Dakota. Phillips was also a leader in that movement.

A previous version of this story said Nathan Phillips is a Vietnam veteran, based on information from Native News Online. Pentagon records show that he served in the Marine Corps Reserve during that era but did not deploy to Vietnam.