Accessibility links
In 'The Birds, The Bees,' Teens Take On Sex Ed In Olivia Hinebaugh's new novel, a girl gets fed up with her school's abstinence-only classes and sets herself up as a sex ed expert, handing out condoms and advice with help from her mom, a nurse.

In 'The Birds, The Bees,' Teens Take On Sex Ed

In 'The Birds, The Bees,' Teens Take On Sex Ed 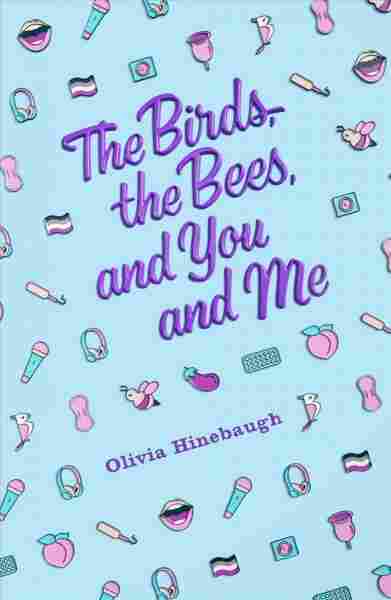 The Birds, the Bees, and You and Me

Title
The Birds, the Bees, and You and Me
Author
Olivia Hinebaugh

This past fall, I was invited to be in the room when my niece gave birth to her third child (Hello, Liam!). As a writer who has no children and never will, I recognized this as an educational opportunity I could not pass up. What I did not realize was that it would be exactly the experience I needed to prepare myself for this review.

Lacey Burke, the 17-year-old protagonist of The Birds, the Bees, and You and Me, is a strong-willed feminist who's comfortable in her own body and knows her own mind. She was raised by an even stronger-willed feminist mother, a nurse in a maternity ward. Lacey has a keen interest and an aptitude for nursing as well. She interns as a doula, and even considers changing her focus to a college with a stronger nursing program.

Lacey has two best friends: the outgoing Evita, and the flawed romantic Theo. They are all virtuosos in a string quartet, with a heavy mainstream focus and an eye to performing together as a band. Forward-thinking Evita is a biromantic asexual, and the head of their school's Gender and Sexuality Alliance. Theo is sweet, plays a mean cello, and almost every girl in this book is in love with him. Including Lacey.

In the midst of all this, Lacey's senior seminar class begins a unit on "healthy life choices." It is, unsurprisingly, filled with talks that demonize sex and advocate for an abstinence-only approach. By the second class, Lacey is fed up; she interrupts to speak about condoms and the importance of safe sex. The teacher is livid. The class is inspired. And Lacey ends up as the de facto sex guru of the school, holding "office hours" in the bathroom and distributing educational pamphlets about condoms. Lacey, Evita and Theo fill a locker full of prophylactics, sanitary pads, and pregnancy tests, and then distribute the location and combination via word of mouth and Tumblr.

Lacey feels she is doing important work, since the kids at school are starting to have sex anyway. A good friend of hers got pregnant and didn't return to school because she was so ashamed. Lacey figures the opposite of shame should be education, right?

The Birds, the Bees, and You and Me is a dense and ambitious debut novel, covering a myriad of subjects from the ethics of sex ed to a girl's first sexual encounter. There is a fascinating juxtaposition between the innocent, overwhelming feelings fueled by Lacey's first love and first kiss, and the comfort with which she discusses what are typically deemed more mature topics — like oral sex and consent — with her peers. Lacey's mother plays an important role, being both a font of wisdom and levelheadedness and a source of amusement — she's so insistent that the kids be comfortable with these discussions that they inevitably become pretty uncomfortable. In this way, Hinebaugh subtly but intelligently raises the question of why these topics are still awkward and even taboo.

'The Birds, the Bees, and You and Me' is a dense and ambitious debut novel, covering a myriad of subjects from the ethics of sex ed to a girl's first sexual encounter.

I was also struck by the vocabulary in this book. Progressive teens today are familiar with words like "feminist" and "patriarchy," and would not shy from terms like "cisgender" or "amatonormative." Hinebaugh also addresses words (like "lewd" or "pornographic") and behaviors to watch out for that might indicate stigma, more opinion than fact, and other advice that doesn't have teens' best interest at heart. By the end of the story, there is, happily, a moment where Lacey and her friends are able to sit down with the administration to define and change some of these terms.

In fact, there's a lot at the end of this story, because there is so much in this story. I daresay it might just have as many endings as The Return of the King, but each thread is tied up satisfactorily.

I'm not sure if this is a book parents will put into their children's hands or if teens will pick it up for themselves — either way, it covers important topics in a thoughtful, respectful and knowledgeable manner. I would recommend it to fans of the subversive new Netflix series Sex Education, and to any teen who wants to know more about sex.