Accessibility links
Differing Narratives After Standoff Between Native American Man, High School Student The interaction between the man and the teen caused an outcry. But a more complicated picture has emerged of the day when several groups of protesters converged at the Lincoln Memorial in Washington. 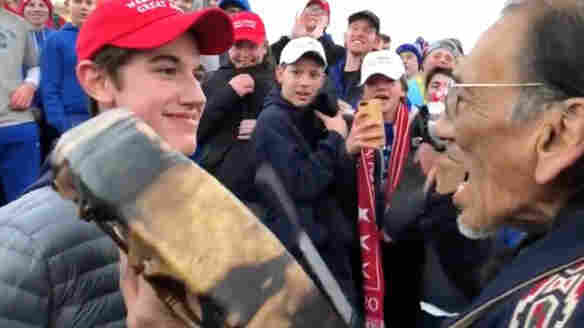 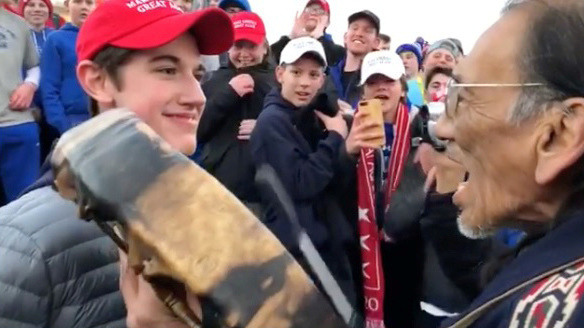 A viral video of a Native American man surrounded by teenagers at the Lincoln Memorial in Washington, D.C., created a furor and spurred an apology from the students' Kentucky high school. But since then, other videos and narratives have emerged that give more context to Friday's confrontation.

It happened on the same steps where civil rights leader Martin Luther King Jr. called for racial harmony in the U.S. with his famous "I Have a Dream" speech in 1963.

Three groups of protesters converged beneath Abraham Lincoln's statue: Catholic high school students who were in Washington for the anti-abortion March For Life, American Indians who were part of the Indigenous People's March, and a smaller group called the Black Hebrew Israelites.

In the widely watched video [Warning: profanity], an Omaha elder and well-known Native American activist named Nathan Phillips is seen beating a drum in front of Nick Sandmann, a junior at Covington Catholic High School wearing a Make America Great Again hat. Around them, a predominantly white crowd of Sandmann's classmates — many of them in pro-Trump attire — cheered, jeered and laughed.

Covington Catholic High School issued an apology over the weekend, promising to investigate what it called behavior that goes against "the Church's teachings on the dignity and respect of the human person." The statement from the private, all-male school was issued jointly with the Covington diocese, which operates nearly 40 schools and has close to 9,600 students.

Reaction on social media was swift and harsh. In a statement sent to CNN, Sandmann said he and his parents received death threats and insults after the video spread.

"I am being called every name in the book, including a racist, and I will not stand for this mob-like character assassination of my family's name," Sandmann wrote. He added that the threats came from a "social media mob that has formed over this issue."

Sandmann also urged people to watch longer videos of what happened at the Lincoln Memorial on Friday. One nearly two-hour recording [Warning: profanity] shows that some of the most contentious moments came before the confrontation in the viral video, and that the incident apparently started with a confrontation between the Black Hebrew Israelites and the high school students.

The students met at the Lincoln Memorial an hour early, preparing for buses to pick them up for the ride back home, Sandmann said. That's where they encountered the Black Hebrew Israelites shouting proclamations on the stairs.

He said the Black Hebrew Israelites yelled insults at the students, and that with the permission of a teacher chaperone, they tried to drown out the invective with school chants.

One of the group's members, Shar Yaqataz Banyamyan, later said he had been angered by how the students treated both his group and the Indigenous Peoples marchers. As for his fiery and sometimes profane language, he said, "Y'all know that's just rhetoric."

In a nearly two-hour video posted by the Black Hebrew Israelites, Phillips is seen walking toward Sandmann and his classmates minutes after the students had performed a school chant.

"It just was getting to be a madhouse," Phillips said. He compared the slurs coming from the Black Hebrew Israelites to the taunts of the Westboro Baptist Church — a group he has seen at other protests.

"There was no intention of getting in between those two groups" at the Lincoln Memorial, Phillips told NPR on Monday. But the video shows he did just that, walking past the Black Hebrew Israelites and partly into the crowd of high school students, where he stopped in front of Sandmann.

Phillips hit his drum and sang, with a few members of his group joining in behind him. In front of him, Sandmann stood and smiled, as his schoolmates whooped and danced.

Asked what he was feeling at that time, Phillips said, "I was, just moments before that, I was experiencing great fear ... of the young people that had surrounded me."

As NPR reported over the weekend, the Indigenous Peoples March "stemmed from the 2016-17 protest at Standing Rock over plans for an oil pipeline to cross Sioux Lands in North Dakota. Phillips was also a leader in that movement."

But Sandmann said he "did not witness or hear any students chant 'build that wall' or anything hateful or racist at any time."

"I never interacted with this protestor. I did not speak to him. I did not make any hand gestures or other aggressive moves. To be honest, I was startled and confused as to why he had approached me."

Sandmann said when he heard someone yell that the students "stole our land" and should "go back to Europe," "I motioned to my classmate and tried to get him to stop engaging with the protestor, as I was still in the mindset that we needed to calm down tensions."

As for his smile that's been criticized as proof that he mocked Phillips, Sandmann said, "I was not intentionally making faces at the protestor. I did smile at one point because I wanted him to know that I was not going to become angry, intimidated or be provoked into a larger confrontation."

Phillips said he had just been trying to move past the students and finish his song atop the Lincoln Memorial's stairs when he walked up to Sandmann.

"I started going that way, and that guy in the hat stood in my way, and we were at an impasse. He just blocked my way and wouldn't allow me to retreat," he told The Washington Post.

But Sandmann said he "never felt like I was blocking" Phillips, adding, "He did not make any attempt to go around me. It was clear to me that he had singled me out for a confrontation, although I am not sure why."

That account of events drew a laugh from Phillips, who said Monday that it sounded like "a young man trying to alter his story to make himself look good, maybe. I don't know."

Phillips said that he doesn't necessarily want the student to be punished for his part in Friday's incident — "but this young man has to come to some kind of understanding of where he was at, and what he did."

The standoff ended when the students were told their bus was ready to pick them up and start their journey home, Sandmann said. He added he was thankful that "nothing physical had occurred."

Even as that confrontation was playing out, as the longer video shows, other Covington students and the Black Hebrew Israelites continued to shout at one another — and to edge closer. Eventually, a man who was apparently a chaperone yelled at the students, "Hey guys! Back it up!"

The man then made his way down the few feet of space separating the teenagers from the Black Hebrew Israelites, pushing the students closer to the statue of Lincoln.