Accessibility links
'Field Guide To The North American Teenager' Taps Into The Raw Anxiety Of Adolescence Ben Philippe's debut novel follows a black French Canadian teenager grappling with his parents' divorce and the upheaval that comes with moving from Canada to Texas in the middle of the school year. 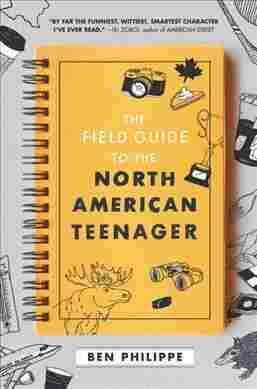 The Field Guide to the North American Teenager

Ben Philippe's new novel The Field Guide to the North American Teenager takes readers right to the eye of the storm.

"When you're a teenager, that's the age where you feel everything to the absolute highest, right?" Philippe says. "So you're not just like, 'oh yeah, my relationship is hitting kind of a weird spot.' It's like, 'The world is crumbling and screw your casserole mom and nothing makes sense and I'm just going to sob in a stairwell!'"

Field Guide's protagonist is Norris Kaplan. He's a hockey-loving, black French Canadian kid who's a snarky, skeptical fish out of water in his new Austin, Texas high school. And though Philippe grew up in Canada, his life is reflected in a lot of Norris' experiences. "On the one hand, Norris has a very very thick outer shell, he's very much trying to attack first, because he just assumes that moving to Texas, coming into the middle of the year, that people are going to attack him. He's black, he's French, he's Canadian, he has an accent that's probably similar to mine, so he has his guard up."

It's not a trope, but I remember reading so many YA books where the protagonist is just mean and acerbic, and sort of like off-putting. And for some reason, everyone just flocks to them. And in the real world, that's not really how it goes ... if you push people away, most of the time they just leave. And I wanted to start Norris at his brattiest, and sort of have him come to that lesson.

On the movies and TV that influenced this book

I'm French, I come from a French-speaking household ... so I basically kind of learned English watching The WB ... that might explain a lot.

Those [chapter] headers come from years of soaking up America through the prism of teenage movies. Through seeing, you know, Ten Things I Hate About You, Bring it On, all those wide tropes of high school being almost this Hunger Games of different districts. I was a grown adult when I was writing this, I knew that they weren't true, but I loved the idea of the American high school. I'm French, I come from a French-speaking household. I was also an only child, and I had a TV in my room, so I basically kind of learned English watching The WB ... that might explain a lot.

I wanted to make it through an interview without bringing up The Gilmore Girls, but I can't! I love that show, and I think that cadence of always having a quippy reference is how I approached Norris, even though his is coded in trying to keep the world at bay, it's a very defensive maneuver for him even though he's not quite aware of it yet — it is how I engaged with social situations for quite a while.

Norris Kaplan is deeply depressed when he moves to Austin. It doesn't look like what you might expect from depression, but he's very hurt because his parents got divorced. He wanted to stay with his dad, to stay in Canada, but the dad basically refused, because he had a wife and a new child, and Norris feels like he's sort of been cast off, even though he loves his mom. I think he's a child of immigrants that dealing with the ripples of divorce in an immigrant household, which was my case too.

On dealing with divorce as a child of immigrants

I'll speak for myself, not the full scope of all immigrants everywhere — my parents moved from Haiti to Canada, and as an only child, a lot of the reason why they moved, a lot of their hopes and expectations were based on me, sort of to give me a better life, a better school, a better future — and I felt, I think a little bit, that when they got divorced, that was a failure on my part, that the son, or the child, having a better life wasn't enough to keep them together. So it's not an active or conscious thing on Norris's part, but I think that's a spine that the character and I do share.

I think when it comes to black male characters, there's often the — I call it the Barack and Trayvon dichotomy, whereas either you're given someone who's perfect, who's almost bigger than life, who's going to end up becoming President, essentially, or you're given the tragedy, you're given all the potential that's going to get snuffed out from the world. And people say that, you know, Norris doesn't really have a thing — he's not this amazing talent or political activist. And that's exactly what I was aiming for.

This story was produced for radio by Kat Lonsdorf and Justine Kenin, and adapted for the Web by Petra Mayer.