Accessibility links
For Many With Disabilities, 'Let It Go' Is An Anthem Of Acceptance The breakout song from Disney's Frozen has inspired many marginalized groups — but its message of rejecting stigma holds special resonance for disabled people and their families. 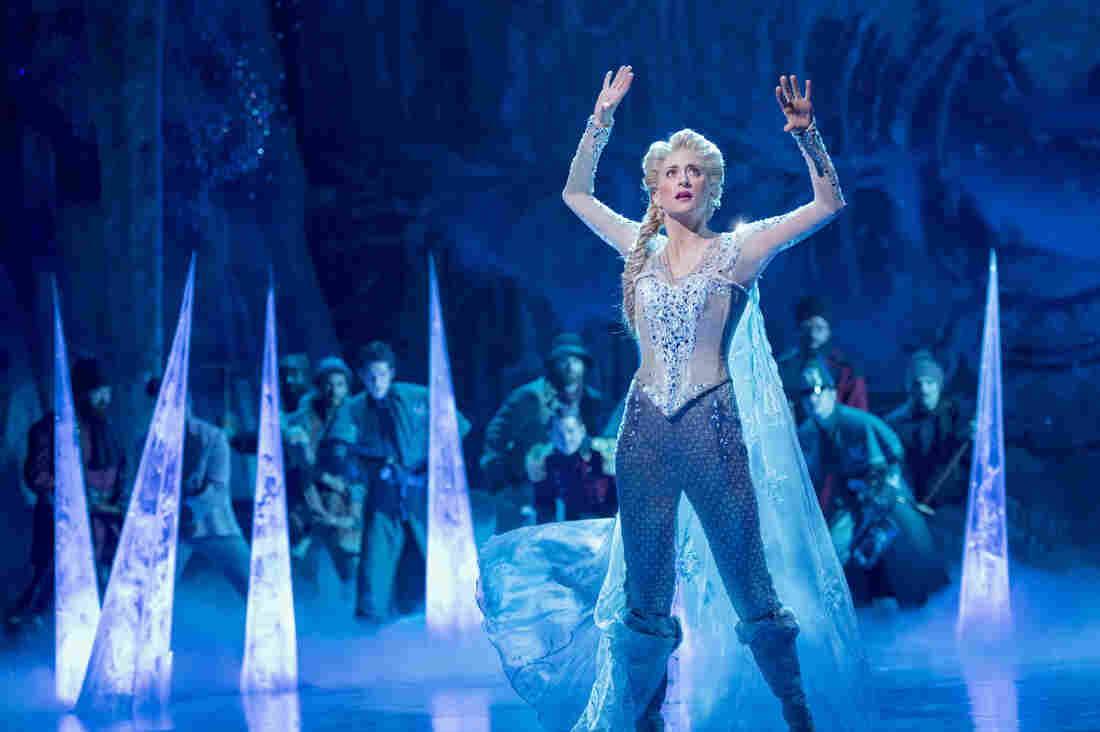 Caissie Levy performs as Elsa in the stage adaptation of Frozen, which opened on Broadway in 2018. Deen van Meer/Disney Theatrical Productions hide caption 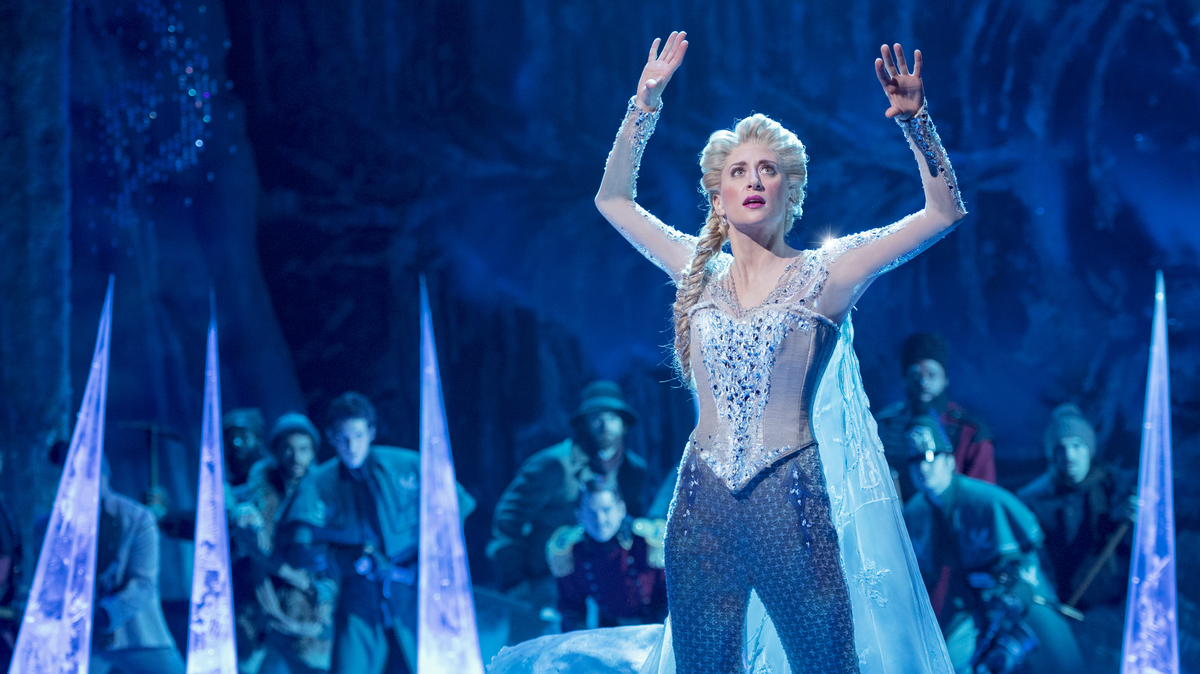 Caissie Levy performs as Elsa in the stage adaptation of Frozen, which opened on Broadway in 2018.

Disney's Frozen remains one of the greatest box-office successes in history. But in terms of impact and influence, it is perhaps most loved and best remembered for one of its breakout songs.

No matter which version you know best — the Oscar-winning film version sung by Idina Menzel, the pop version by Demi Lovato or the one currently performed on Broadway by Caissie Levy, star of Frozen's stage adaptation — "Let It Go" announces itself as an anthem right away.

Since its arrival in 2013, many groups have found significance in the song on a personal level. Stories abound of gay, lesbian and transgender people, people in prison, people with eating disorders and chemical addictions and plenty of others on the margins, all identifying with the tale of a queen in hiding, who learns to shed her shame and accepts the things that make her different.

But there is one group for whom "Let It Go" has proven particularly resonant: People with disabilities. To understand why, it helps to remember some specifics of the story.

In Frozen, Queen Elsa sings "Let It Go" just moments after her dark secret has been discovered, forcing her into isolation. For years, she's tried to hide that she possesses the magic ability to create snow and ice, which flies out from her fingertips. She even cuts herself off from her little sister, Princess Anna, whom she loves. Elsa can't control her power, and on the day of her coronation, by accident, she turns her entire kingdom to ice.

"She's this little girl — nobody has ever been born like her," Kristen Anderson-Lopez says. She and husband Robert Lopez are the writing team behind Frozen's original songs. Anderson-Lopez says when they began writing "Let It Go," she knew they were dealing with a character who was feeling ashamed and afraid.

"I pitched the idea of 'let it go,' as the hook, being about letting go of her past, letting go of the expectations, and how it could be about letting her power go," she says. "And then Bobby started playing this vamp that was full of all that fear and shame and secret isolated pain."

The songwriters say they weren't trying to write a disability anthem (though Anderson-Lopez has a brother who is on the autism spectrum), but rather one about the pressure to be perfect. Anderson-Lopez thought about the societal pressure on women to be perfect; for Lopez, it was memories of being a student and needing to get the best grades. For Elsa, "Let It Go" is the moment she begins to stop holding herself to someone else's idea of perfect. 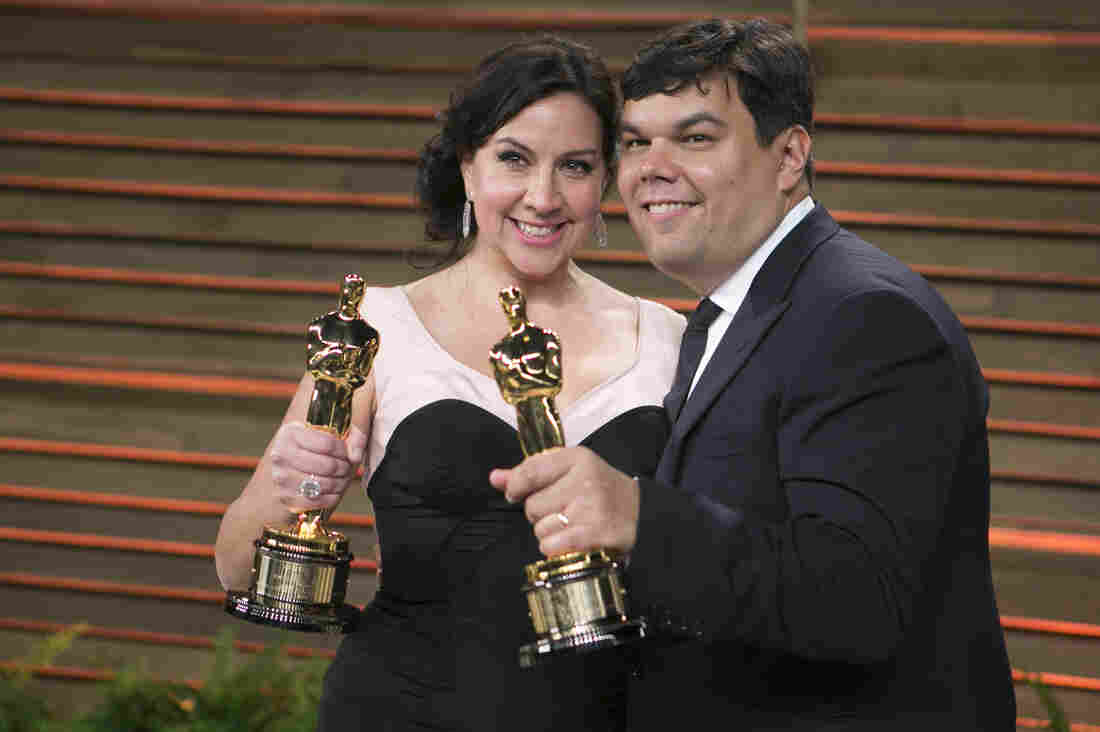 "For this to be a good musical," Lopez says, "that's one of the best parts — when a character transforms." As it turned out, many of those watching and listening found a lot to relate to in that moment of transformation.

One of them was Michelle Black. "She used words like, 'a kingdom of isolation and it looks like I'm the queen,' and that was exactly what I was going through," Black says. "She gave me words to describe this bipolar that I had that nobody had given me before."

A choreographer and mother of three young children, Black says her diagnosis of bipolar II disorder was still pretty new — and confusing to her and her family — when the film came out. She says she'd sometimes get bursts of energy and creativity, which she liked — but when the depression came, she'd spend hours in her room and could be mean to people. The day she watched Frozen in a theater in Utah, she was sitting next to her 7-year-old son.

"And I started bawling watching this, especially this song, because someone finally understood me," she says. " 'The wind is howling like this swirling storm inside' — that's exactly what it felt like to me, this swirling storm of emotions and thoughts and feelings going on inside of me that no one else understood. But Elsa seemed to get it."

And it wasn't just people with mental health conditions who felt seen by "Let It Go": Autistics and people with physical disabilities also identified with the feeling of being misunderstood, isolated or excluded, and wanting to reject the stigma.

Bigger Than Disco, 'You Make Me Feel (Mighty Real)' Is A Celebration Of Self

"You tell someone you have a disability, they go, 'Oh, I'm so sorry.' No, there's nothing to be sorry about. This is who I am," says Cara Liebowitz, development director for the National Council on Independent Living, a disability policy group.

Liebowitz is 26, born two years after the Americans with Disabilities Act banning discrimination against the disabled became law. She has cerebral palsy and uses a wheelchair. But she also has hidden disabilities — obsessive compulsive disorder and anxiety disorder. So Elsa, the queen whose hidden condition is dramatically revealed, feels like an ally.

"Elsa says, 'I don't care what they're going to say,' and I love that line," Liebowitz says. "For once she's confident in herself, and she's not letting other people's opinions drag her down."

The Census Bureau estimates that about one in four Americans has a disability. On college campuses, the number of students seeking mental health services keeps going up: According to a research survey by the American College Health Association, the number of students who say they've ever been diagnosed with depression has grown since 2000 from one in 10 to about one in four today.

This is Elsa's generation — one that's quicker to recognize and accept having a disability. "She's actively using her ice powers and they're part of who she is," Liebowitz says. "Just like disability is part of who we are."

For 16-year-old Jagger Lavely, Frozen has been more than a passion: It has given him new ways to communicate. Jagger is austistic, and speaks in short, sometimes one-word sentences. But he loves the movie, has memorized "Let It Go" and can repeat the lyrics line by line.

When he was 13, Jagger said he wanted to perform in his middle school's talent show. He dressed up in the costume of one of his favorite Frozen characters, Olaf the snowman. But, on stage, he stumbled over the words of "Let It Go." It was a terrifying moment for his mother, Stacey Levine-Lavely, who was in the audience. She says she'd seen the frequent stares her son got in public, and had avoided movie theaters and similar spaces for years, in part, because of it. "My chest tightened," she recalls, as she worried that the other kids would boo Jagger or mock him for forgetting the words.

Instead, they started singing "Let It Go" along with him. "It was one of those moments where he finally fit in," Levine-Lavely says. The video of that performance went viral — and Levine-Lavely, as a result, started a foundation to promote acceptance of people with autism.

In November, mother and son drove from their home in Massachusetts to New York to see the Broadway version of Frozen. It was part of a series of "autism-friendly" plays and musicals facilitated by the arts nonprofit TDF (formerly the Theatre Development Fund), which buys out theaters for shows where audience members like Jagger are free to sing along. Afterwards, outside the St. James Theatre, Jagger gave the show his review: "Awesome."

His mother was more emotional. She says "Let It Go" speaks to her, too, as the parent of a child with autism — especially the lyrics about being "the good girl you always have to be," which reminds her of the expectation to conceal her worries from others.

"I'd always been the good girl. I'd always been the girl everyone thought was so happy. My life seemed so charmed," she says. When she became the parent of a disabled child, people didn't understand her new reality or why she led a more isolated life. "This song allowed me to kind of thumb my nose at that, because here he is. And he's made a difference in so many people's lives."

And that's the power of "Let It Go": It's an anthem for people taking pride in who they are, the way they are. Kristen Anderson-Lopez says she still hears from people who identify with the song's message.

"I think anyone who's carrying a secret shame," she says, "that gets so heavy that they really can't carry it anymore, is identifying with this idea of just shedding that and starting anew. Letting it out, letting it all explode and trying to find your way forward."

A previous version of this story misspelled Kristen Anderson-Lopez's first name as Kristin.