Accessibility links
How France's Yellow Vest Protests Damaged An Already Weakened President Macron "The media are all talking about us, and we actually made the government back down," says one protester at a traffic circle. "We're not about to accept the crumbs Macron has thrown us." 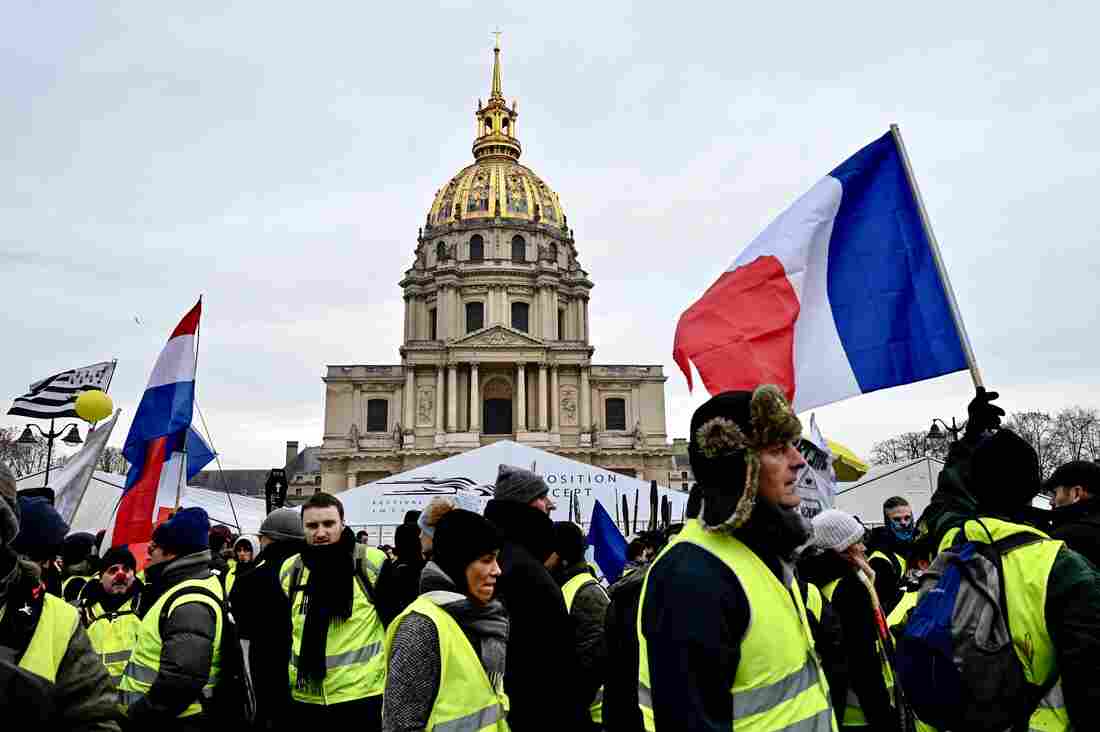 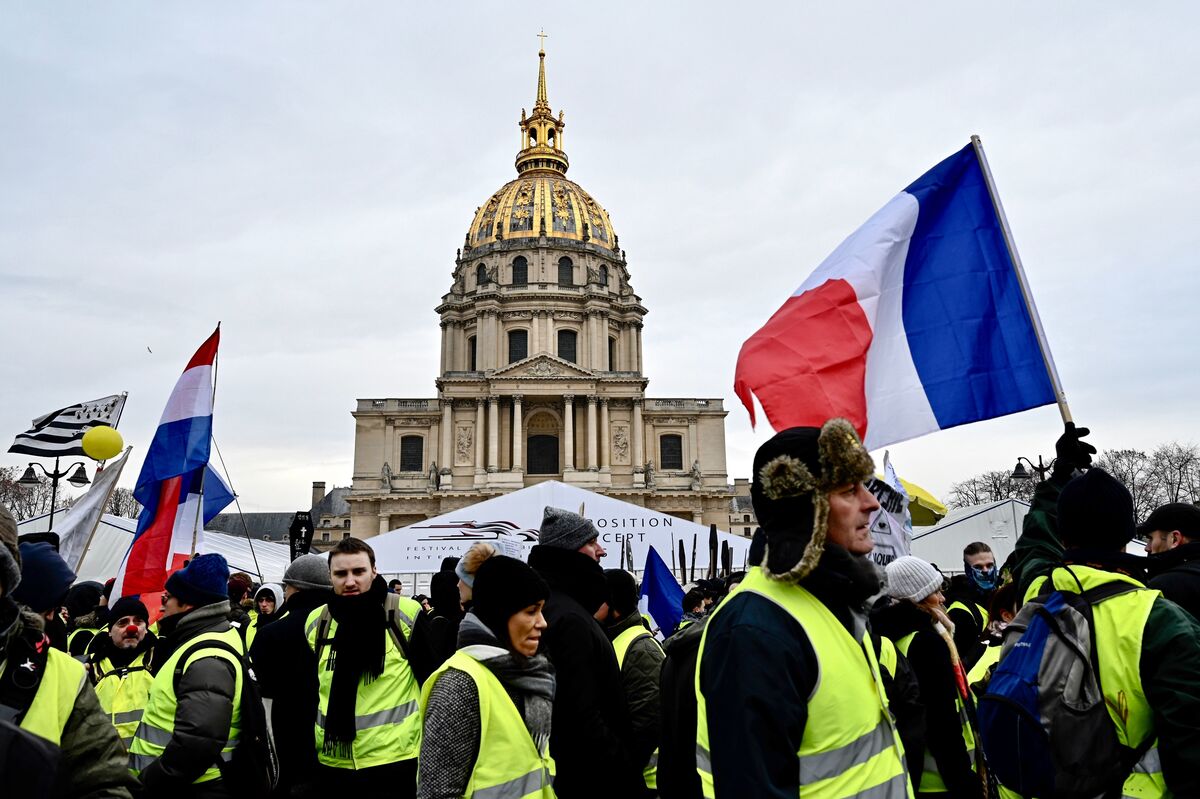 Protesters take part in an antigovernment yellow vest demonstration in front of the Hôtel National des Invalides in Paris early in January.

At a traffic circle outside the northern French town of Rouen, a couple of dozen protesters gather every day, building a bonfire and occasionally blocking traffic. The threat of arrest doesn't keep them away. Au contraire, says protester Frederic Bard; the nationwide movement called the gilets jaunes, or yellow vests, feels pretty powerful.

"The media are all talking about us, and we actually made the government back down," he says. "We're not about to accept the crumbs Macron has thrown us." 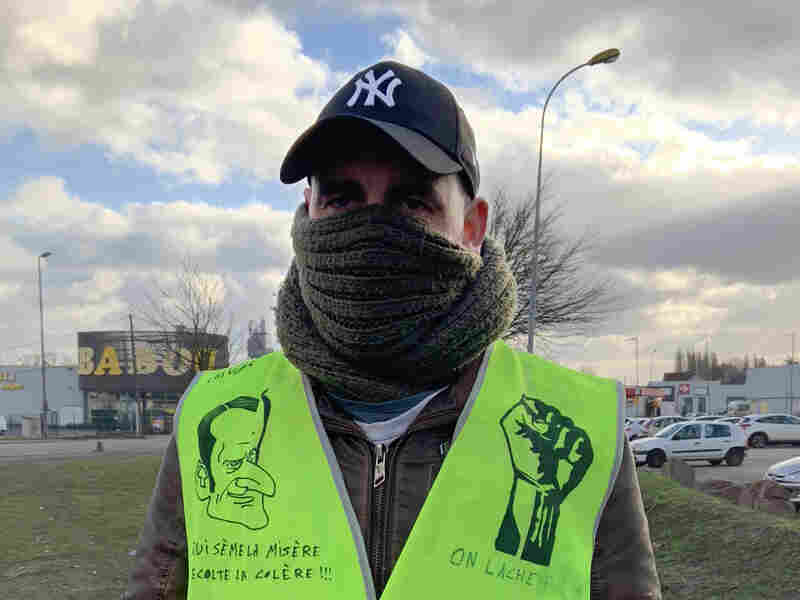 President Emmanuel Macron has offered such concessions as increasing the monthly minimum wage by about $114 and eliminating the fuel-tax hike that set off the unrest. The leader's approval rating inched up slightly to 27 percent in a recent poll. Yet protesters in the yellow vest movement, which has rallied for more than two months across France, say they are still fired up.

Taking their name from the high-visibility safety vests used by motorists, their weekly turnouts are smaller now than the 300,000 who showed up when the rallies erupted nationwide in mid-November, according to Interior Ministry estimates.

But the movement has stunned observers with its endurance, putting sustained pressure on an increasingly unpopular president and provoking one of France's biggest social crises since May 1968.

Bard says the protesters won't stop until Macron resigns. Other demonstrators talk about dissolving Parliament. There are signs that the movement is radicalizing, according to Marc Lazar, a historian at Sciences Po university in Paris.

"They now refuse the possibility of compromise and of negotiation with the government," Lazar says. "They say no, we just want the rejection of Macron — we hate him. The importance of hate is something crucial in this yellow vest movement."

Just two years ago, Macron seemed unstoppable. France's youngest leader since Napoleon, he took office in May 2017 with a large majority in Parliament after his new party swept away establishment politicians. Today, Macron's presidency is paralyzed by a grassroots movement few saw coming.

Macron is a 41-year-old former investment banker who served as economy minister in the previous center-left administration. As president, he set out to make the country's rigid labor market more flexible to stimulate job creation. He says that he wants to make France more innovative and that French people should have the right to try and fail.

But according to political analyst Christophe Barbier, Macron needs to connect with the public better before making deep changes. The president is widely criticized for the way he interacts with ordinary citizens. His gaffes are legendary.

Macron called opponents of his reforms "lazy," and he characterized the French as "Gauls who are resistant to change." When an unemployed young man asked the president for help, Macron told him just to cross the street and he would get a job in a restaurant. Another comment that particularly stuck in people's craw was Macron's contrasting people who are successful with "people who are nothing."

The yellow vest movement has revealed a widening chasm between those living in big cities like Paris, where there is public transportation and relative economic growth, and those in small towns and the countryside, who depend on their cars and have trouble making ends meet. These days, many of Macron's critics deride him as president of the rich.

"For 40 years, our presidents have been favoring the banks, the rich and the big companies," says François Boulot, one of the demonstrators at the traffic circle in the northern French region of Normandy. "But Macron pushed these policies further. And on top of that, he has such arrogant disdain for the French people. His insults have wounded us, and that's what set this movement off."

To channel public anger, earlier in January Macron launched two months of town hall debates around the country. The French love political debates, so the democratic exercise has proved fairly popular, with citizens showing up to give their opinions on everything from speed limits to health care. In theory, conclusions reached in the mass consultation will help shape the second half of Macron's four-year term. 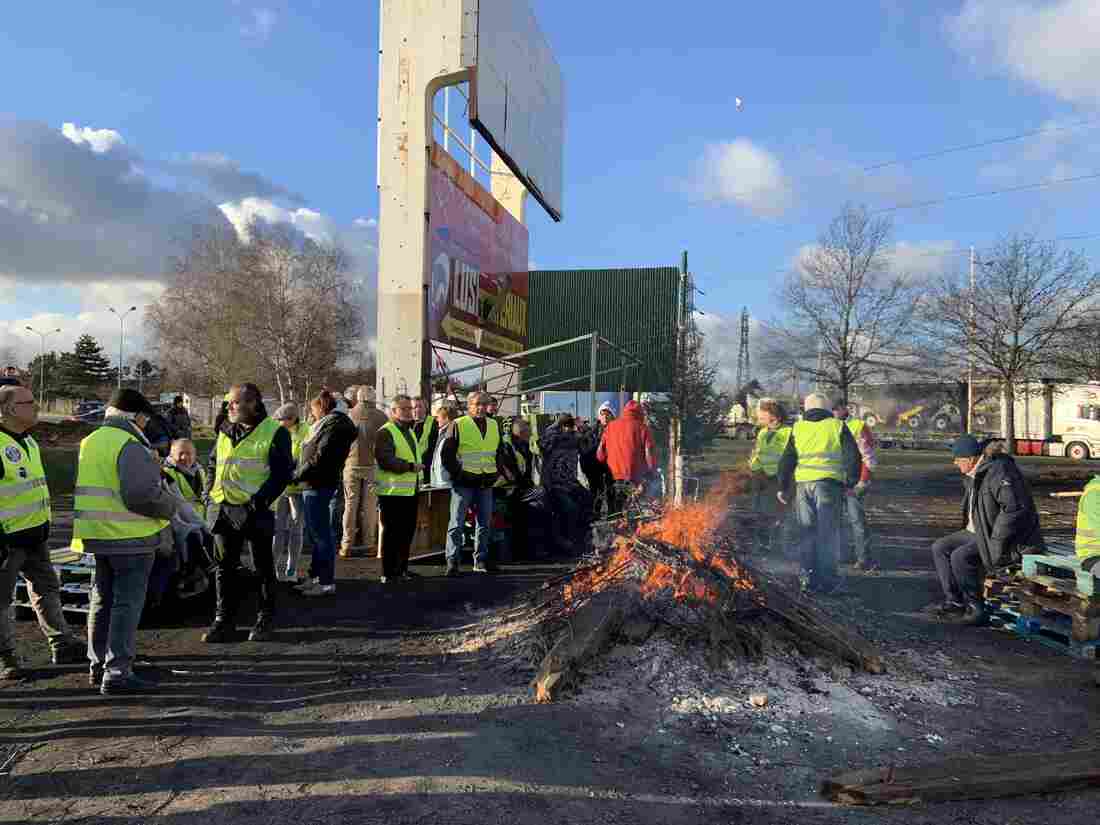 Yellow vest protesters keep a bonfire going at a traffic circle near the city of Rouen in Normandy, France. Eleanor Beardsley/NPR hide caption 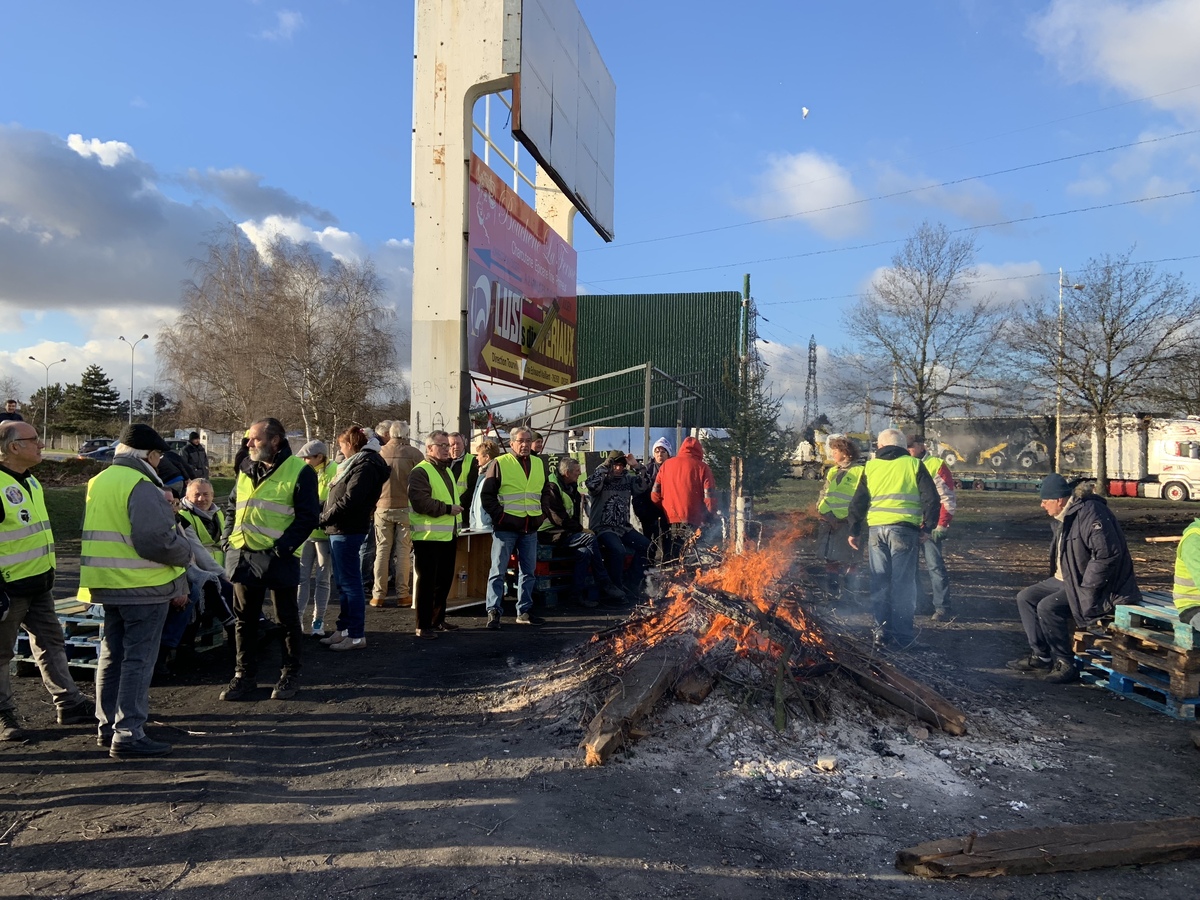 Yellow vest protesters keep a bonfire going at a traffic circle near the city of Rouen in Normandy, France.

The debates have helped to dissipate some of the anger.

But many continue to use the weekly street protests as their pressure relief valve. In some ways, the bonfires and bonhomie at rural roundabouts have replaced the cafes and shops that have disappeared as rural France declines.

"Before, any village would have at least a newspaper and tobacco shop, a bakery and a couple of cafes where people could meet and socialize," says 42-year-old Claire Bitaine, a yellow vest protester who has lived her whole life in the countryside of Brittany and Normandy.

"That's all disappearing as people are pushed to come to cities, even though there's no work. And rural life is discredited in France today," she adds.

"Many French people, even if they don't support the movement, think that the claims of the gilets jaunes are not only for them but are for all the French people," he says.

Yellow vest protesters are mostly white. Ethnic minority groups have been noticeably absent from the protests.

There could be another potential factor. In December, French security officials opened an investigation into possible Russian social media interference, following reports by cybersecurity experts of activity by a network of hundreds of Twitter accounts. Depending on their findings, it could reveal another example of Russia's efforts to stoke social tensions in foreign countries, similar to the Russian propaganda campaign researchers have described in the United States. 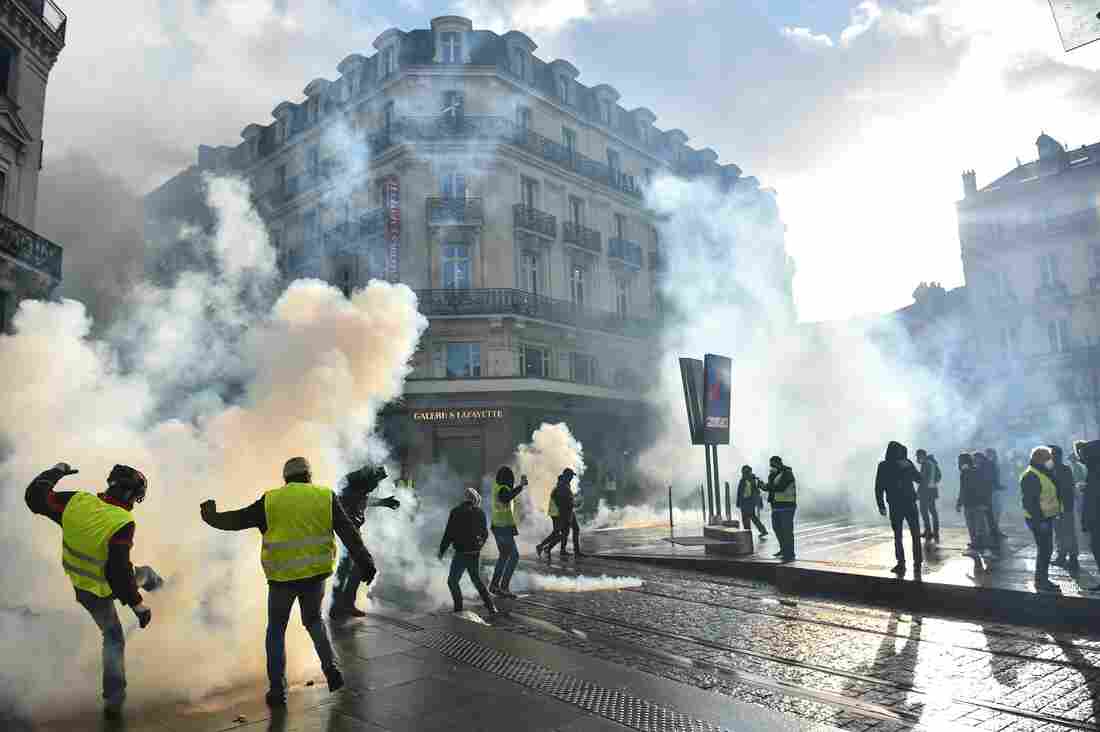 Protesters clash with police as tear gas is used during an antigovernment demonstration called by the yellow vests in Angers, in western France, on Jan. 19. Loic Venance/AFP/Getty Images hide caption 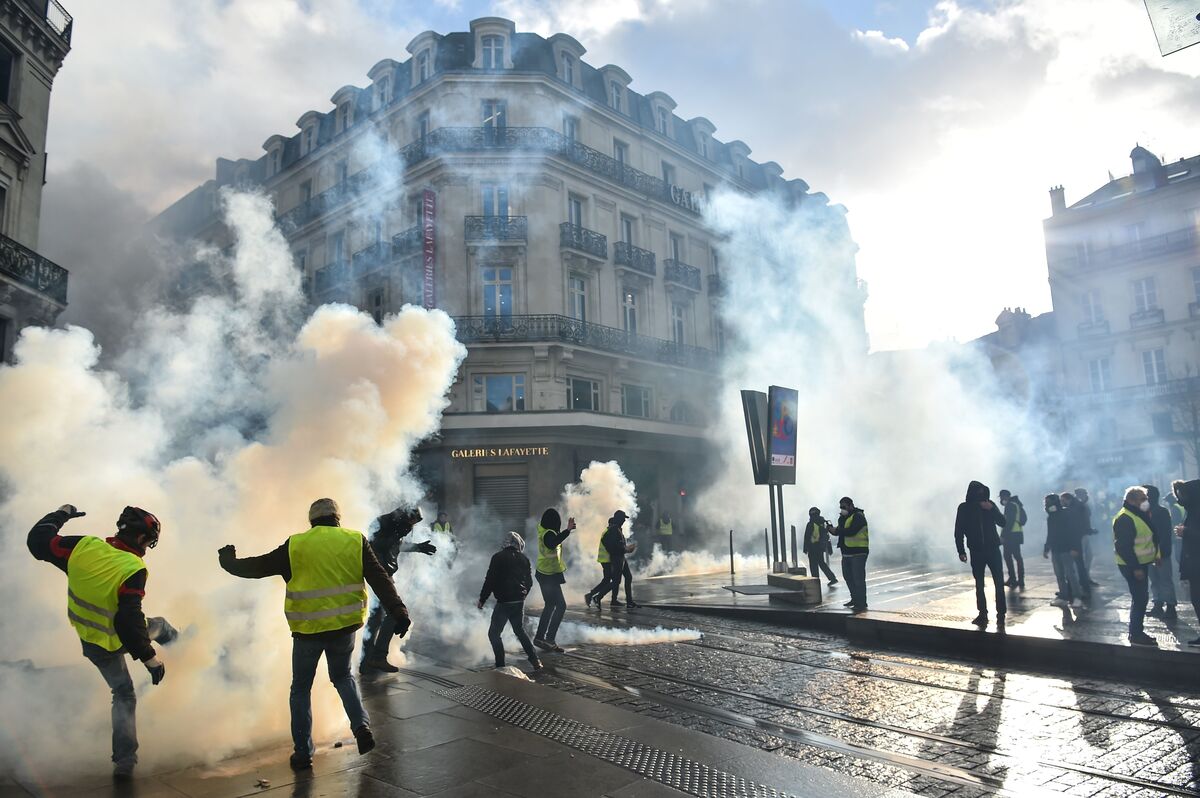 Protesters clash with police as tear gas is used during an antigovernment demonstration called by the yellow vests in Angers, in western France, on Jan. 19.

Whether or not there was outside interference, France's social tensions have been on display. Some yellow vest protesters are more aligned with the far left, others the far right, but most say they are apolitical. They represent a crisis in which a large sector of French society rejects "the new rules of capitalism," says analyst Barbier.

They don't accept that a CEO makes many times what an average worker does. Or that shareholders get ever larger dividends while employees get laid off.

"In France, if you are good in business, you have to share the profit with everybody," Barbier says. "Even with those who are not smart, even with those who don't deserve it. That's the French conception since the French Revolution. The state is there to redistribute the wealth. People accept this, and people want this."

Political analyst and left-wing activist Thomas Guénolé says the level of political and social instability is becoming unsustainable. "If it gets stronger, to the point of paralyzing the system economically, it's possible the system will collapse," he says.

Speaking last week on French radio, philosopher Bruno Latour said the crisis is very serious, but at least it's giving France the chance to address some of its deep-seated issues and inequalities. "It could help France avoid a situation like Brexit in Britain," he said, implying the notion that the U.K. neglected underlying anger and social problems that drove voters' decision to leave the European Union.

Barbier thinks that Macron has learned his lesson but that the president won't be able to carry out his planned reforms.

"Those dreams are dead," says Barbier. "He now has to work in reality. This country is an old country. She does not want to move too quickly. The young Emmanuel Macron frightened people with his speed."

Barbier says Macron will need a new team and a new way of speaking to the French people. And he will have to slow way, way down.