Accessibility links
'Serenity' Is All Wet. Literally. A perpetually sodden Matthew McConaughey plays a fishing-charter captain drawn into a murder plot in this soapy, dopey tale that turns into an unconvincing fish story.

'Serenity' Is All Wet. Literally.

'Serenity' Is All Wet. Literally. 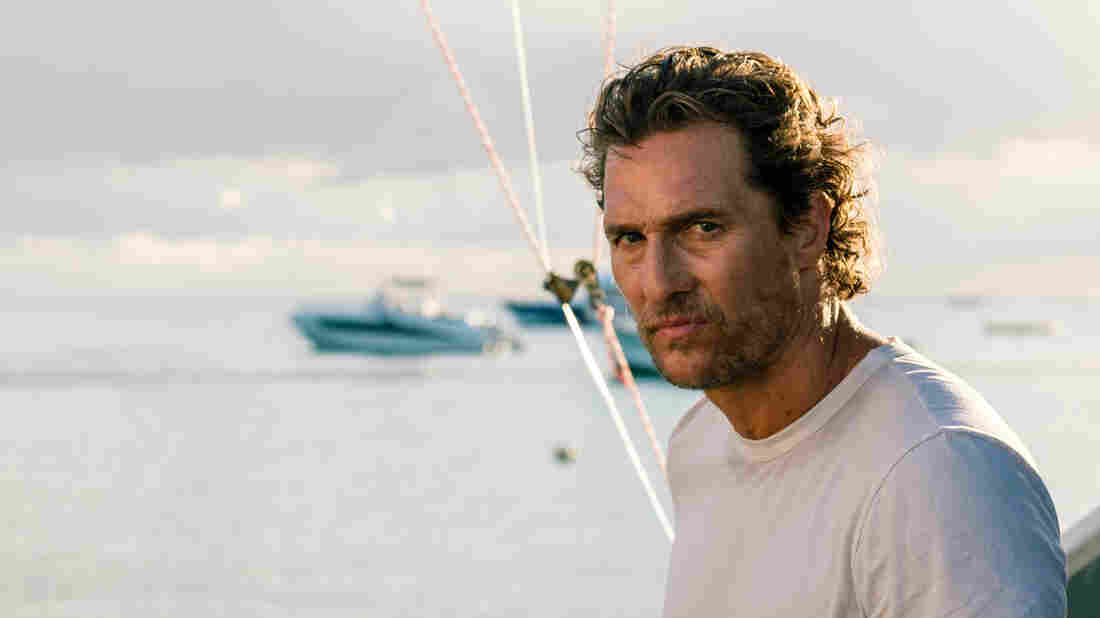 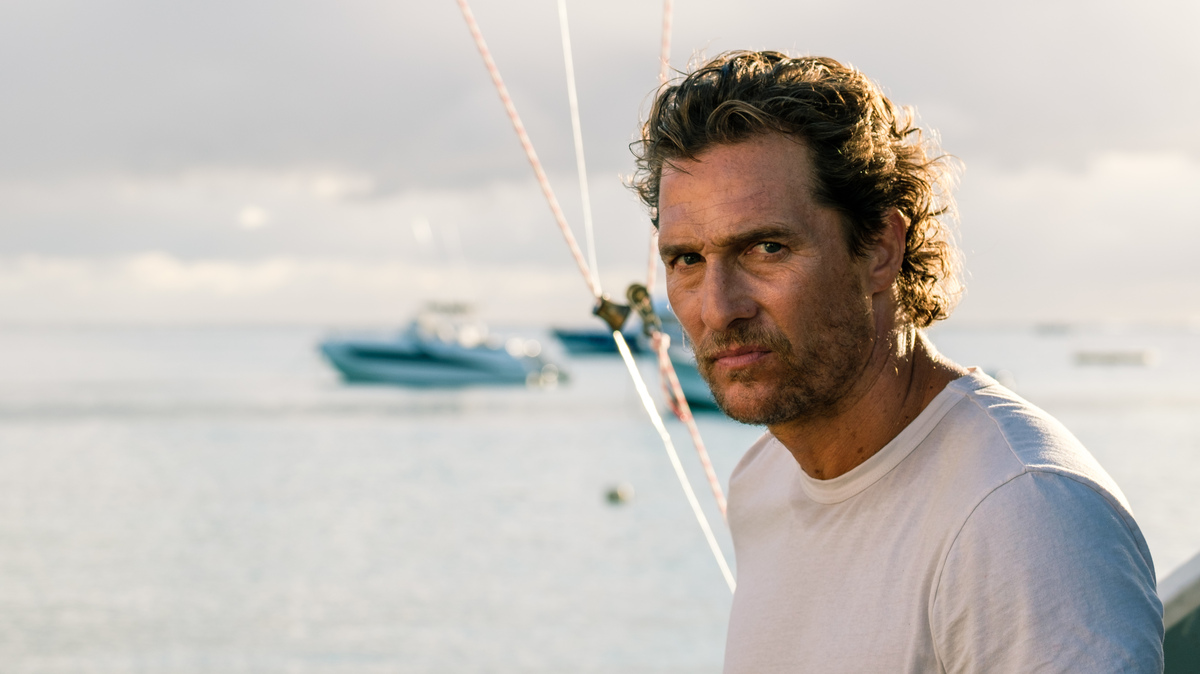 Matthew McConaughey, looking none too serene, plays Baker Dill — no, seriously — in Serenity.

Call it the M. Night Shyamalan problem: Should a film distinguished by howlingly tin-eared dialogue, emaciated characters and a plodding, easily guessed plot be pardoned its crimes when its maker reveals after 90 or so minutes that he's made his illusion less than fully persuasive ... on purpose?

There are a million potential answers to this insoluble aesthetic quandary, but the only correct one is: Nnnnnnnnope!

Certainly not when the movie comes to us from a proven storyteller like Steven Knight, screenwriter of the fine thrillers Eastern Promises and Allied, and the writer-director of Locke — a drama in which he and Tom Hardy, owner of the only face seen in the entire film, held us rapt for 85 minutes without ever leaving the confines of an SUV. A filmmaker who can pull off something that formally audacious ought to be able to handle a seemingly conventional neo-noir like the new Serenity, but the underwhelming results indicate Knight might've laid out in the sun for too long. ("I had so much bad [expletive] rum I lost my grease," drawls its hero, diagnosing both himself and the movie.)

Knight's daylight mystery is not without its soapy, dopey pleasures, and it would likely be more satisfying were it simply content to be the vaguely Caribbean-set, deeply McConaughey'd retread of Body Heat its initial hour-plus suggests. The picture opens as so many episodes of Miami Vice have, the camera skimming low across emerald waters towards a boat. On the deck salty sea captain Baker Dill (!!!) — Matthew McConaughey, as though any other movie star would be walking around under that moniker — has just pulled a knife on the two drunken tourists who hired him to take them on a fishing cruise. They've hooked one, all right, but Captain Dill refuses to hand over the line so one of his customers can reel 'er in. That's because — as Dill explains to his first mate, Djimon Hounsou, playing a character whose only job is to be the sounding board and conscience for the white star — this is the quarry he's been chasing. "I can feel it," Dill says.

But his white whale gets away, leaving Baker Dill even broker and more agitated than he was before. He really wants to catch a big fish, but as one character tells him, "That's a tuna that's only in your mind."

So Dill is in a dissipated state when Anne Hathaway, playing the ex-wife by whom Dill fathered a now-adolescent son, swoops in from Miami and offers him $10 million to arrange for her abusive current husband (Jason Clarke) to perish in an accident at sea. On the one hand, Baker Dill is not for sale, and his ethical code does not permit murder. On the other hand, Clarke's character is a mobster and a violent sexual predator who's fairly begging the star of Free State of Jones to bury him in Davy Jones' Locker. What's Baker Dill to do?

Frankly, it's the least interesting question that Serenity asks. But Knight is dead set on stacking up the questions, and worse, supplying answers. Eventually, he covers everything — why every last resident of the sparsely populated fantasy island of Plymouth (the film was shot on Mauritius, in the Indian Ocean) is obsessed with Baker Dill's personal beeswax; how they know things about him and his former spouse they could not possibly know; why Baker Dill is called "Baker Dill" instead of, say, "Mike Johnson" or "Candlestick Maker Sandalwood."

Knight even gives himself an in situ story reason for photographing the always-wet McConaughey in various states of sodden undress, his chin rough and his smooth chest toned and gleaming despite the fact that Baker Dill lives in a shipping container and subsists on a diet of rum and cigarettes. He always looks as though he's just hopped off a VersaClimber instead of Hathaway or Diane Lane, both of whom are eager, nay, begging recipients of Baker Dill's furious open-water lovemaking. (Lane, the actor least served by Knight's script, hands him a big wad of cash after one of their morning trysts.)

There's a little charge that comes simply from seeing McConaughey and Hathaway, the star-crossed lovers from Christopher Nolan's cosmic odyssey Interstellar, reunited. Too bad it's in a movie that executes its Nolanesque ambition with middle-period Shyamalanesque skill. At least Interstellar blasted us across the galaxy and gave us a half-dozen jaw-dropping set pieces before letting us down with its muddled, sentimental payoff. Serenity barely leaves the harbor.