Accessibility links
Be 'Careful': Boy Harsher Pushes its Darkwave Sound to Thrilling Ends Immersed in sounds both unnerving and velvety, the darkwave duo is at its most intensely physical and sensual on Careful. 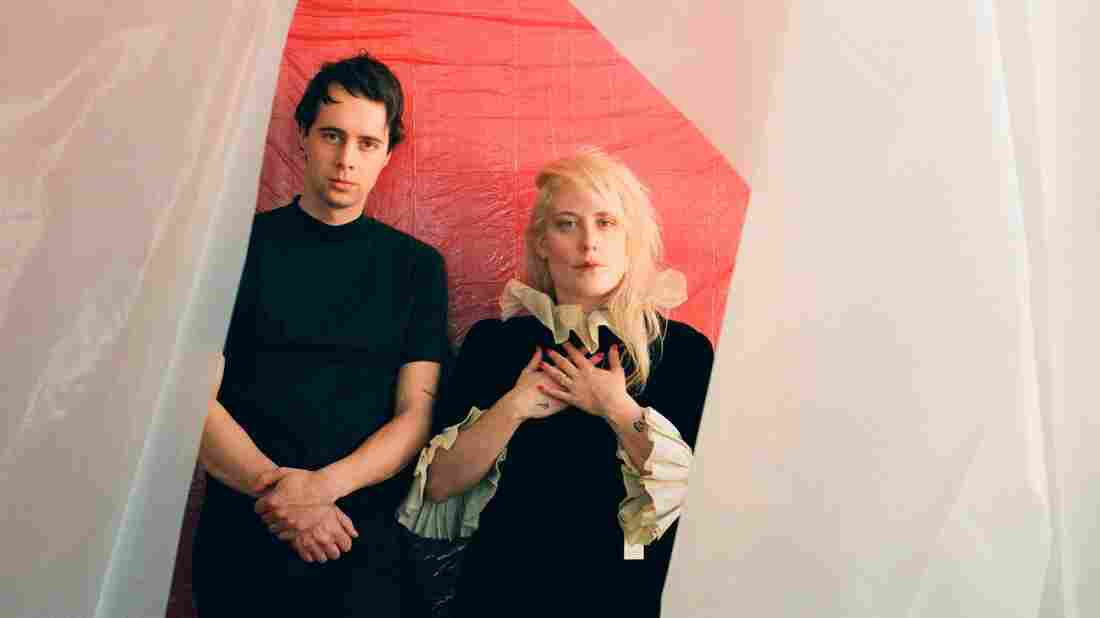 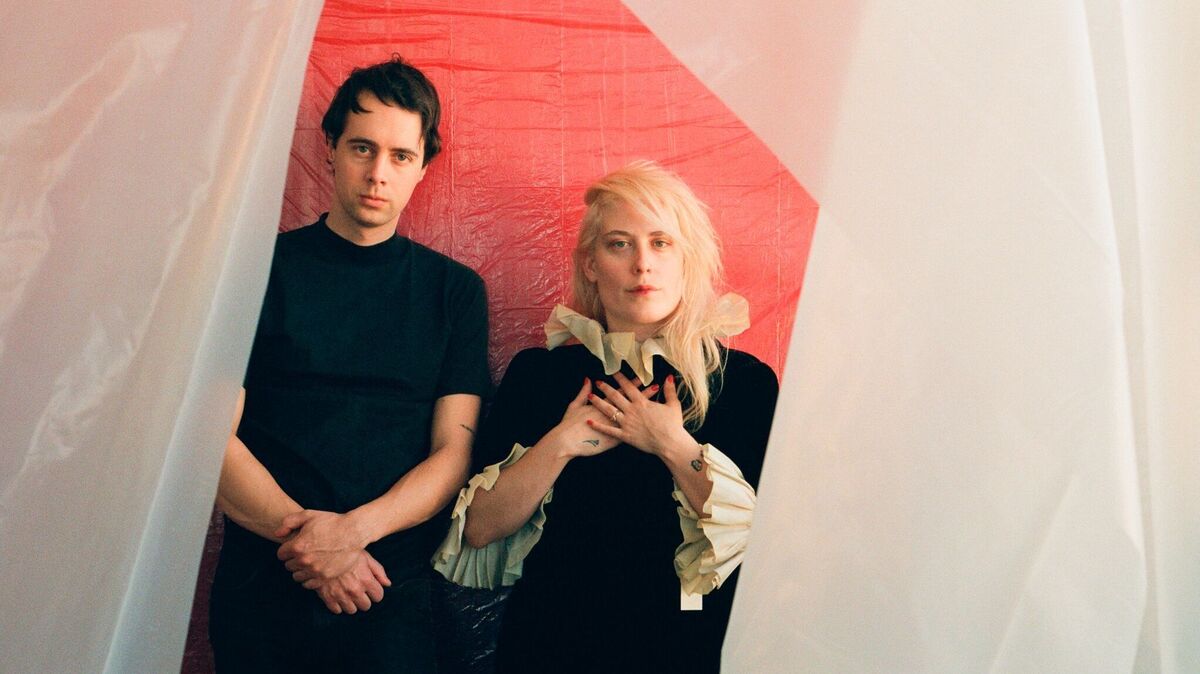 Nedda Afsari/Courtesy of the artist

Boy Harsher's Jae Matthews has, on various occasions, likened the sound of her project with partner Gus Muller to David Lynch's Lost Highway. They share an interest in intense, freaky lust, and the riveting panic of those dark, zooming highway shots is an apt visualization of the duo's darkwave vibes. The comparison particularly suits "Keep Driving," the opening track of Careful, which careens, motor gunning, into their vigorous new record.

Matthews and Muller, now based in Western Massachusetts, met while at film school in Savannah, Georgia in 2012. Legend has it Matthews spotted Muller dancing to New Order's "Bizarre Love Triangle" at a party and decided to court him by sending him her writing. Muller was already an admirer of Matthews' work; he aided on her thesis project and urgently wanted to make art with her. ("I would've scored Jae eating breakfast if she offered," Muller told Metal Magazine earlier this month.) Then, one "hot, southern summer," she let him live in her attic, and soon they began merging Matthews' prose with Muller's compositions. At first they called it Teen Dreamz and thought of it as a literary reading series with a live electronic score. Over time, their work morphed into something a little less verbal and much more visceral: a synthesis of Muller's shadowy, hypnotic sounds and Matthews' gutsy vocals and evocative lyrics.

In 2014, they released their first record as Boy Harsher, a minimalist dark synth EP called Lesser Man. Drawn to bewitching, industrial-style percussion, Muller has cited '70s and '80s electronic innovators like Suicide, Sleep Chamber, DAF and Yello as references for Boy Harsher's initial sound. Matthews, still strongly compelled by the visual, points to a wide range of influences: the performance artists Joan Jonas and Vito Acconci; the films of Lawrence Kasdan, Kenneth Anger and Harmony Korine; the vivid voices of Nico, Circuit des Yeux's Haley Fohr, Linea Aspera's Alison Lewis, Cosey Fanni Tutti and Annie Lennox. Matthews and Muller's mutual attraction to repetition, darkness and movement, as well as their romance, made their collaborations explosive. Over the next two albums — 2016's Yr Body Is Nothing and 2017's Country Girl — the two solidified their talent for feverish, endlessly danceable explorations of rejection, resentment, desire and hedonism. 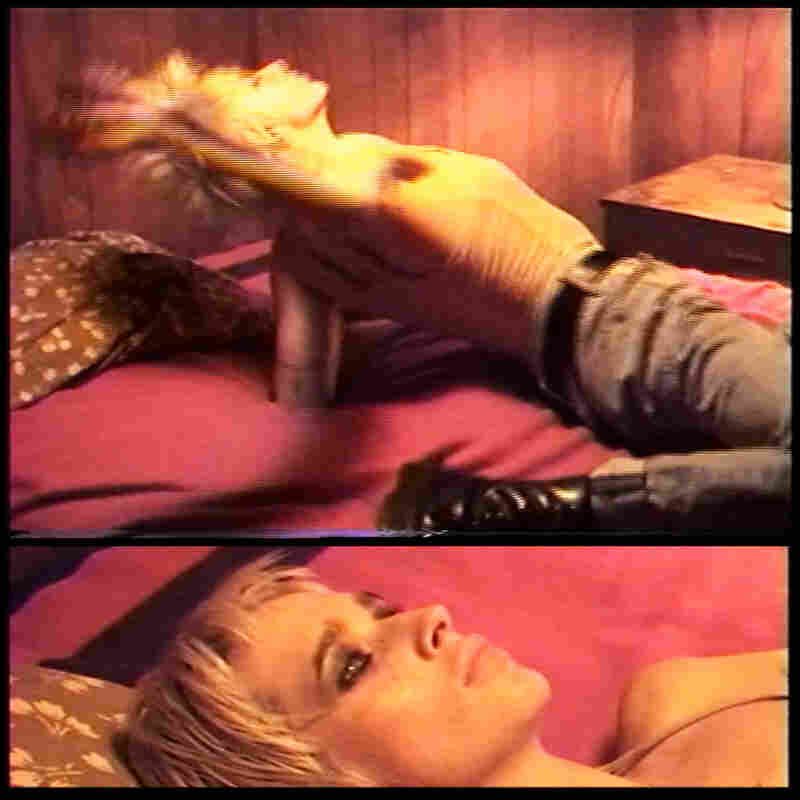 Muller and Matthews follow in the grand tradition of the darkwave duo — think the aforementioned Suicide and Linea Aspera, and Sixth June, Saâda Bonaire, Essaie Pas, Lebanon Hanover and Xeno & Oaklander, to name just a few. They deftly harness the power of machines to be intensely physical and sensual, to create something that feels truly and deeply like electronic body music. Equally at home on punk and noise lineups, spun at Euro dance halls and goth club nights, Boy Harsher is the sound of totally losing yourself. More than comfortable with emotional extremes, their immersion into lust, pain and lack of restraint is amped up on Careful (out Feb. 1 on Boy Harsher's own label, Nude Club), which grew out of a period of turmoil — Matthews' stepfather died, her mother was diagnosed with dementia, her relationship with Muller was on the outs. "I spent a lot of time examining tenderness, loss, and craving escape," Matthews said of the new songs.

Careful is Boy Harsher at their world's most fully fleshed-out. Muller's composing skills have gotten stronger, at once groovier and more unnerving than ever, as he melds crunchy SPK-style sounds with sweaty goth pop tones. It's straight-up brimming with hits, an album that doesn't quit; a mountainous record with ecstatic highs and harsh lows, in turn grating and velvety. In her lyrics, Matthews hates and loves, she vanishes, she flees, she dreams, bleeds, goes wild. "I've been having fun / My eyes are closed / I'm on the run," she purrs in the smoldering first single "Face the Fire" over Muller's dizzy, churning design. "Hate inside my heart / It washes over / Every thought." It's followed by "Fate," a song about running from yourself, which yelps, pants, bounces and stretches, impish and otherworldly. And then comes "LA," with its metallic club beat; it's a rapturous, masochistic fantasy that's accompanied by an outlaw camgirl romance music video. "You will hurt me either way," Matthews sings. "Do you even know what I want / What I hold tonight?"

Muller and Matthews explore all their possibilities. "Come Closer" is crushing EBM for disappearing and never being found. "The Look You Gave (Jerry)," which mourns Matthews' stepfather, pairs poignant vocals with layers of biting industrial strikes. "Crush" is ominous and nearly ambient, a jagged landscape dotted with pained mumbles. On its heels is the blissful, Pet Shop Boys-honoring "Lost," all romantic and sighing, with lines about driving and feeling alive, an endless ache, leaving this town behind in Daddy's car. The finale, "Careful," is a pitched-down late-night one-sided phone call, a nervous thirst into the dark.

But the song that feels most heightened, the most Boy Harsher 2019, is "Tears." "Do you feel uncomfortable?" Matthews asks as Muller's chilly, euphoric rhythm unfurls. "What's this version of your life?" She repeats the words "hatebody," "who am I?" and "just walk away" until they almost lose their meaning. Here, their hypnosis is at full effect — simultaneously enveloping and icy. Like wanting someone and hating them. Like dancing so hard you forget who you are. Like the thrill of escape.