Accessibility links
For People Who Need Assistance, The Lingering Shutdown Could Mean A Food Crisis Food assistance in the form of SNAP benefits came early this month owing to the shutdown. But in Pennsylvania, recipients are spending the benefits quickly, and there may be no new funds for February.

For People Who Need Assistance, The Lingering Shutdown Could Mean A Food Crisis

For People Who Need Assistance, The Lingering Shutdown Could Mean A Food Crisis 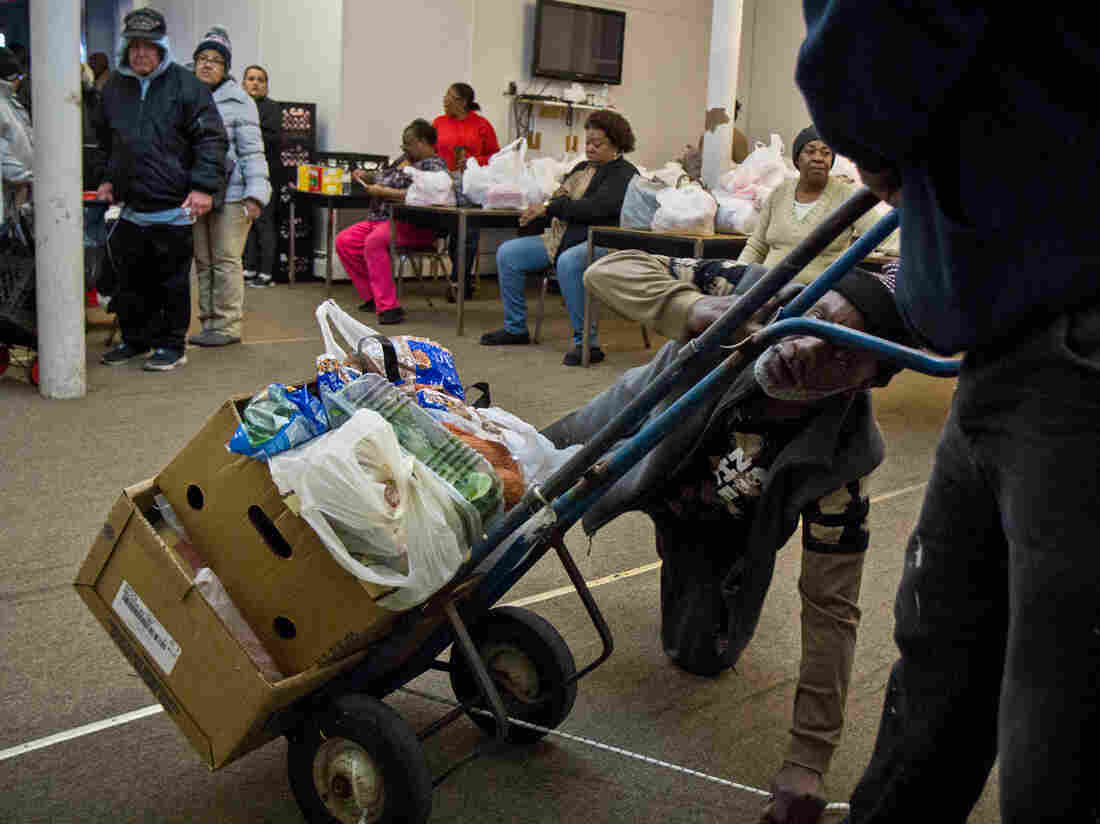 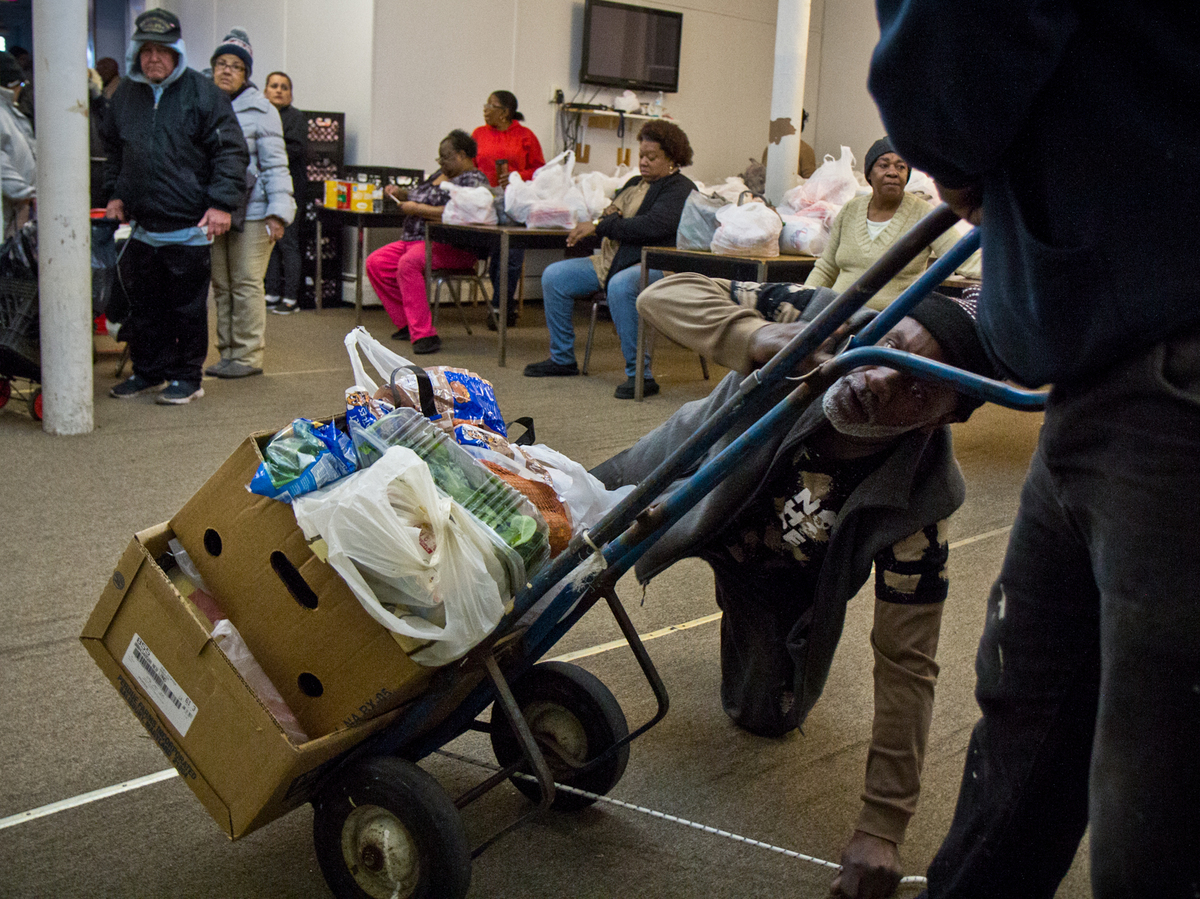 Volunteers at the St. James Chapel Church food bank in Reading, Pa., hand out food and help the older and disabled.

The longest government shutdown in U.S. history has some of the country's poorest residents worried about how they are going to stay fed.

In Pennsylvania, no place has more trouble keeping food on the table than the city of Reading, population 88,000, about an hour outside Philadelphia. Nearly half of all households there receive food stamps, the highest rate in the state.

The human toll of that statistic can be found everywhere, including among the people lining up for a monthly food pantry operated by St. James Chapel Church of God.

That's where Janelle Rosado waits. She receives about $300 a month in food stamps loaded on a government-issued debit card to help feed herself and her three kids at home, but she still struggles to provide for her family.

"SNAP is all we know"

Like everyone else in the line of about two dozen people, Rosado is quick to talk about the subject on her mind: the Supplemental Nutrition Assistance Program.

Unless the longest government shutdown in U.S. history soon ends with a deal to reopen the government, Rosado is about to experience life without SNAP. Federal officials say SNAP funding to states has now been thrown into limbo, with the nation's 38 million recipients expected to start feeling pressure as soon as next month.

Like many others in Pennsylvania's poorest communities, Rosado is bracing herself for what might soon be a new reality.

"What I did is stock my freezer with as much meat as I could, look for the best deals, like even the cheapest cans," she said.

Rosado used to work in cosmetology but lost her job years ago. Since then, she has taken temporary gigs around Reading and has been applying for full-time work, but she said it has been hard to come by.

Rosado has a lot of company in Reading, formerly a railroad and manufacturing boomtown that, over the decades, has experienced the painful effects of deindustrialization.

Federal figures show that today about 44 percent of households in Reading receive food stamps, making it one of the highest rates in the nation.

Inside the St. James Chapel Church of God, Marilyn Ray sits at a table as a volunteer, checking in people who come for bags of food.

Retired and living on a fixed income, Ray is worried about her own adult daughter, who lives with her and uses SNAP benefits. If the shutdown drags on Ray is afraid the pantry's lines will surge so much that they might deplete food supplies.

"I may get a person that's one single person, but the very next person in line may be a mother with six children," says Ray, 72. "How do I serve them with nothing to serve them?"

A SNAP crisis in February

In the state capital of Harrisburg, the same question is being raised by Teresa Miller, secretary of the Pennsylvania Department of Human Services. "I've been anticipating that mid-February is when we might see the SNAP crisis," Miller said.

The federal government told Miller food stamps would have funding through February, but next month's benefits were distributed early, which Miller said could pose a big problem.

State officials mailed recipients letters informing them about this payment adjustment, but Miller said the letters may have puzzled some people.

It's hundreds of millions of dollars a month in SNAP benefits. This is a lot of money that goes out the door. The state is not going to be able to step in and pay that kind of money in place of the federal government.

"We know that recipients who experience food insecurity are probably going to have greater challenges and confusion during this government shutdown," Miller said. "They don't know what's going on and they're not sure why they're getting payments on these off days."

She had hoped people would budget the benefits for two months, but early data suggest that is not happening. Instead, she said, state figures tracking SNAP recipients show that they are spending twice as much.

That means, starting in February, nearly 2 million Pennsylvania residents may be without food assistance. Miller said there's no way the state can cover the gap.

"It's hundreds of millions of dollars a month in SNAP benefits. This is a lot of money that goes out the door. The state is not going to be able to step in and pay that kind of money in place of the federal government," she said.

It is unclear when the partial government shutdown, now in its 34th day, will be resolved, as Democrats in Washington and President Trump remain at odds over billions of dollars in funding for expanding a wall along the nation's Southwest border.

Lowman Henry, with the Harrisburg-based Lincoln Institute of Public Opinion & Research, favors Trump's side of the debate. He says supporters of the proposed border wall understand that the shutdown may require short-term pain for many Americans.

"Yes, it is very unfortunate that there are innocent people caught in the crossfire," Lowman said. "But they do need to look to Washington and put pressure on their elected officials to come to the table and seriously negotiate to deal with the humanitarian crisis on the Southern border."

As the standoff continues, the Greater Berks Food Bank, which distributes some 7 million pounds of food each year to hungry households in the region, is worried about its supply.

"Without a doubt, this could make a tremendous impact on the inventory that we have here," said Doug Long, a spokesman with the food bank. "These families really are stuck in the middle and potentially can be suffering quite soon here as a direct result of the shutdown."

The USDA says it is examining all options in trying to come up with an emergency plan. The agency reportedly has around $3 billion in a contingency fund — but providing benefits to the country for just one month costs around $5 billion.

All the crisis planning around feeding the country's most in-need people has St. James pastor Steven McCracken feeling troubled.

"Apprehensive, concerned, angry," McCracken said. "Honestly, there's no reason for this. There shouldn't be a government shutdown. And this long is just ridiculous to me. Because the people who need it most are the people who suffer the most."

From a mother's standpoint, I'd like to go to Washington and tell them to stop acting like a bunch of spoiled brats.

Ray, the food bank volunteer, said she does not understand the need for the political drama. "From a mother's standpoint, I'd like to go to Washington and tell them to stop acting like a bunch of spoiled brats," she said. "To me, it seems like, 'If I can't have what I want, I'm going to stomp my feet and hold my breath until you give it to me,' and that's exactly what's going on."

A retired insurance worker, Ray grew up in Reading with a father who worked in steel factories and a mother who worked in dry cleaning. Life was sometimes paycheck to paycheck, and that experience has brought her a greater sense of dignity in wanting to help families who struggle to make ends meet.

Ray says Washington would function better if politicians had a better understanding of places like Reading.

"We don't have people paying a whole bunch of dollars in taxes. We don't have people who have these great big jobs and are bringing in the money and had the voice out there to speak or to protest whatever it is," Ray said. "So we're forgotten about."

This story comes from Keystone Crossroads, a statewide public media initiative reporting on cities across Pennsylvania.