Accessibility links
In 'The New World,' Art Transforms Dystopia Into Camp Author Aleš Kot and artist Tradd Moore create a zippy, dizzily excessive vision of a future where the entertainment industry has merged with law enforcement after nuclear catastrophe and war.

In 'The New World,' Art Transforms Dystopia Into Camp

In 'The New World,' Art Transforms Dystopia Into Camp 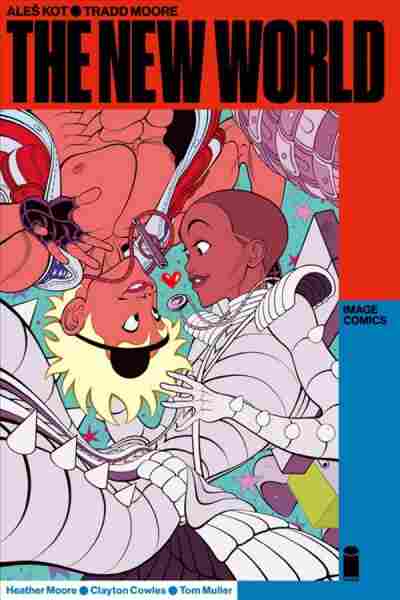 Aleš Kot has a lot he wants to say in his work, but first and foremost he wants to say a lot. He peppers interviews with a postmodern array of references — Hannah Arendt, David Cronenberg, Vaclav Havel, Mad Max — and overstuffs his projects with various contemporary themes. Kot doesn't just spin stories about hackers, werewolves, spies and the surveillance state: He seeks to encapsulate the strung-out overstimulation that characterizes 21st-century life.

Maybe that's why Kot decided to set not one, but two of his recent comics in dystopian futures. The New World, which appears in collected form this week, takes place a few decades from now. That's around the same time as (but in a parallel universe from) Days of Hate, the second volume of which releases next month. Because why envision one future when you can dream up two? The series' jostling existence represents a kind of meta-excess on top of the excesses packed between the books' covers.

In 'Trish Trash,' Roller Derby — And Anti-Capitalist Parable — On Mars

It's a fun way to draw the future — especially Kot's rather grim future. In this world, nuclear explosions decimated five major United States cities in 2037. Now the only part of the continent that "follow[s] the best, truly proven traditions of the American Dream" is New California. Among said traditions is the merging of the police force with the entertainment complex. Officers wired with cameras have the power to execute perps, Judge Dredd-style, based on audience votes for "Erase" or "Live."

Stella is one of these cops, with a twist: She refuses to kill the people she captures, no matter how the viewers vote. She gets away with this not just because she's popular, but because her grandfather is President Herod, the country's dictator. "True love: What does it mean to you, Stella?" he asks her one night over a ludicrously ostentatious dinner. "True love is a boot in a human face. True love is imposing the will of the state for the benefit of the many. True love, dear Stella, means allowing the many to benefit from the abuse of the few." Well, at least he's not shy.

Opposing this all-too-predictable despot — and all-too-predictably winning Stella's heart — is the rakish Kirby. He's into "hacking, fraud, social engineering, guerilla sabotage [and] fighting the state." He and Stella meet at a rave and, the future being what it is, wind up on the run together. Along the way, in bits and pieces, we see the sort of patchwork society that too often prevails in near-future stories: a range of ethnic and economic types united only in their fondness for "Erase"-ing televised perps.

Kot wants his baddies to be edgy and scary, his lovers to be sexy and magnetic. They aren't, but as drawn by Moore they're something better: fun.

Very little here is new, and much of it is overblown. Thanks to Tradd Moore's art, though, there's plenty to think about — even if what you're thinking is how silly it all is. His version of a postapocalyptic city is something out of the Jetsons, and the rave where the lovers meet could have been drawn by Aubrey Beardsley. His police uniforms make Stella and her rival, the brutal Logan Maximus, look like the Stay Puft marshmallow man. But Moore's surfaces are so airlessly beautiful, they transform such absurdities into high camp.

They do the same for Kot's over-the-top, often shallow ideas. Kot wants his baddies to be edgy and scary, his lovers to be sexy and magnetic. They aren't, but as drawn by Moore they're something better: fun. This isn't a cautionary future, it's a kooky, self-mocking one. That may not be what Kot intended — but then, he was aiming above all for excess. When you do that, you can't predict what rogue messages sneak in.