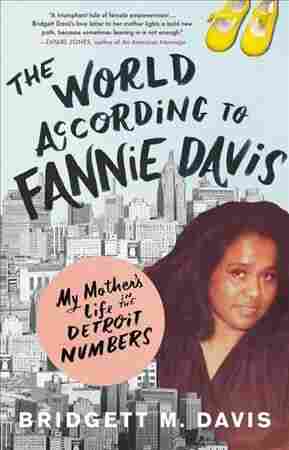 The World According to Fannie Davis

My Mother's Life in the Detroit Numbers

Title
The World According to Fannie Davis
Subtitle
My Mother's Life in the Detroit Numbers
Author
Bridgett M. Davis

Fannie Drumwright Davis Robinson was an esteemed civic figure in Detroit. She was married to her teenage sweetheart, came up from the segregated South, lived in a fine red-brick colonial house, cared for her five children. A stay-at-home mother, she helped to create a playroom with toys from FAO Schwarz in the basement.

Fannie Davis also ran a numbers racket from her dining room table — an underground gambling operation that collected bets and paid out winners on the right three-digit numbers.

The numbers game was illegal, of course. But Fannie Davis was known for running an honest illegal game.

Novelist and filmmaker Bridgett M. Davis has written a memoir of a remarkable character, who happens to be her mother. It's called The World According to Fannie Davis: My Mother's Life in the Detroit Numbers.

"It was my normal," Bridgett Davis says in an interview. "And in fact, I found great comfort in the recitation of numbers that she would actually, basically be saying over the telephone as she took her customers' bets. I liked the sound of it."

On why her mother got into the numbers business

My mom entered the numbers business out of necessity. She had migrated with my dad and my three oldest [siblings] to Detroit in the mid '50s. My father found it very difficult to get and keep work in the auto plants, in the auto factories, in the city. And that's for several reasons. There were discriminatory practices in the auto factories against black men who had migrated there to get work; lots of things were going on. And my mother just took stock of the situation and realized she really had to make a way out of no way. And she approached my uncle, her brother John, who had a really good, steady job at the racetrack in Detroit. He was actually an exerciser, a horse exerciser, and he went on to be a trainer. So he had steady money. And she showed up one night — as he says, "woke him up and everything" — and said, "Listen, I want to bank the numbers. I think I can do this. Do you have $100 that you can loan me?" He said, "Hmm. OK, I'll do it." And that started her business. ...

My mom was brilliant. She was. She had, as they used to say, she had a way with numbers.

On the turmoil in Detroit in her youth

The '60s in Detroit had a lot going on. The uprising that the media called the "race riots" of Detroit happened in 1967. And that was just a combustion of all the racial tension that was happening at the time in the city. It was also a bedrock of civil rights. And so people, blacks, were fighting for justice at the same time that there was real pushback among whites — who were on the verge of a serious white flight, but at that point were really wrestling to control Detroit. So it was — I was a child, but there was a lot going on. I could feel it. The tension was in the air.

On her pride in her mother, and her need to keep it a secret

You have really captured the heart of my dilemma, my entire life. Imagine being that proud of your mom and not being able to brag about her. It was discombobulating. My mother was extremely honest, and forthright, and upright. And she did not like liars, cheaters, people who stole, anyone who tried to get what they didn't deserve. You know, she had a real moral fiber, a moral compass — which I know sounds ironic, because she was in this business that was, you know, I call it an underground economy. But the thing I want people to understand about the numbers is that it was a legitimate business that just happened to be illegal.

On what happened when the official state lottery "usurped" numbers games

Well at first, it was affected in stages. What a lot of people don't know is that originally, when the lottery was made legal in states like Michigan, it was a weekly drawing. You didn't get to pick your numbers. It was pretty sedate. And that was not direct competition with the numbers, which was a daily operation in which people were betting on these three digits that they got to choose. ... It took about five years before the state lottery commission finally got around to its real point, which was to be direct competition with the underground numbers operation. And so that is when they introduced the daily.

On the material wealth her mother left behind

Believe me, I've never been more appreciative. Essentially, without my realizing it, my mother was providing me with generational wealth. And it had a direct consequence in my life all the way up to now. Thanks to property that my mom bought using money from the numbers, I was able to take that property that I inherited, sell it and use it to invest in a co-op in New York City, in Brooklyn. Yeah. And that led to what I call every Brooklynite's American dream, is to have a brownstone where you can rent out the ground level. ... That's my mom, all the way.

On why she still plays the lottery

It just feels like an homage, but — you know, it's just who I am and what I know. On some level, it's just staying plugged into a particular community that I wouldn't otherwise. But of course, it's also fun. And in my case, my mom really benefited from playing her own home address back in the day — that's how she was able to buy our family home. She hit the number, on 7-8-8. And fast-forward all these years, this beautiful brownstone I love so much in Bed-Stuy: The address is 675. Guess what 6-7-5 plays for in the dream book? The name "Fannie." ... So I play that number a lot.

Dana Cronin and Barrie Hardymon produced and edited this interview for broadcast. Patrick Jarenwattananon adapted it for the Web.