Accessibility links
Naomi Osaka Of Japan Secures Her Second Grand Slam Title With Australian Open Victory The 21-year-old player stumbled in the second set, but recovered in the third. "I felt like I didn't want to have any regrets," she said of the match. 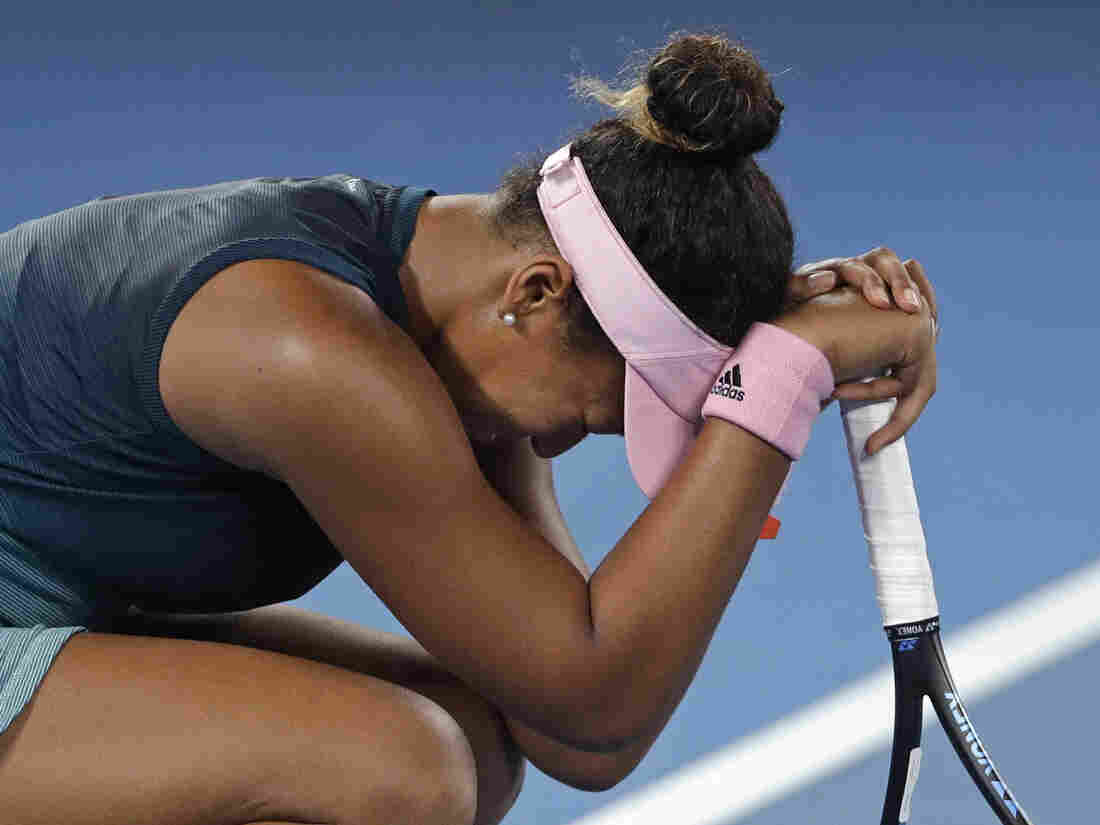 Japan's Naomi Osaka reacts to her victory over Petra Kvitova of the Czech Republic in the women's singles final at the Australian Open tennis championships in Melbourne. Mark Schiefelbein/AP hide caption 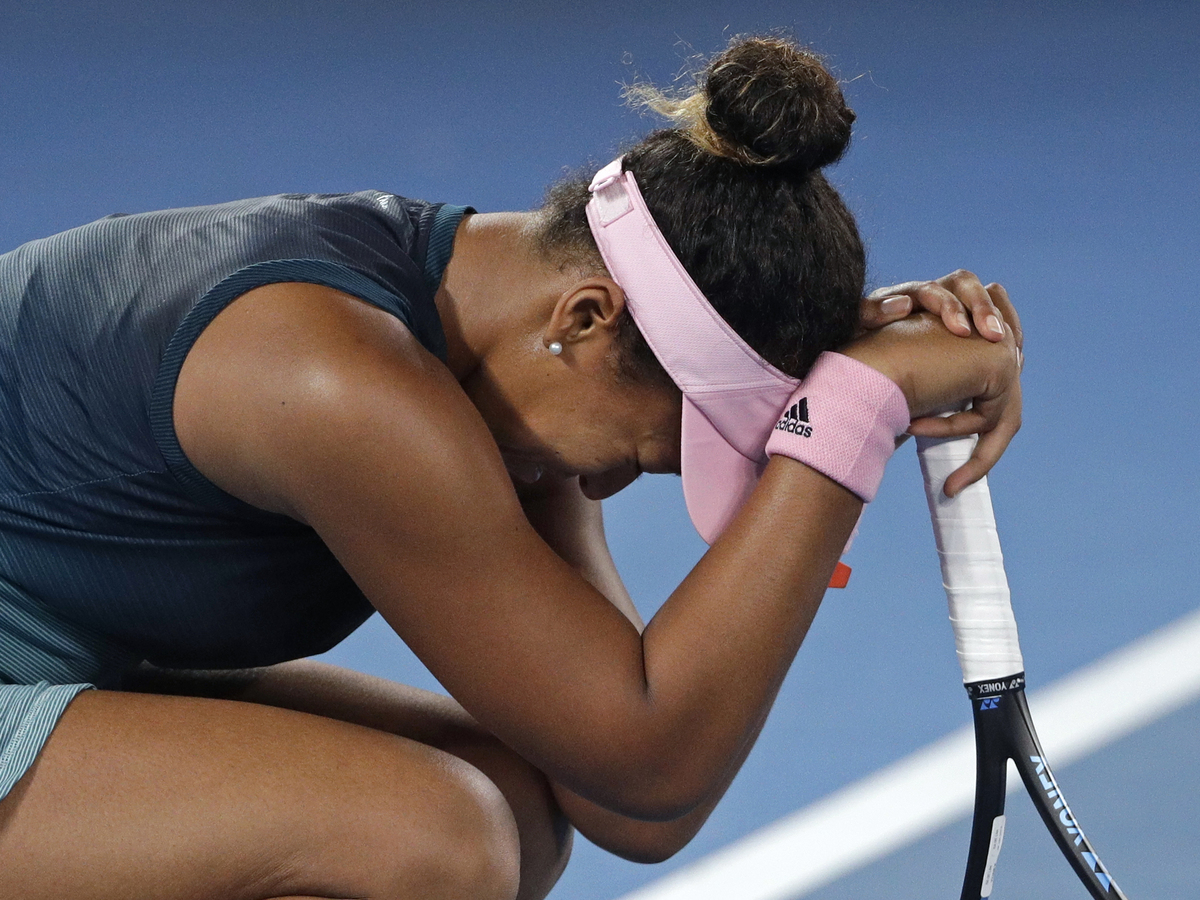 Japan's Naomi Osaka reacts to her victory over Petra Kvitova of the Czech Republic in the women's singles final at the Australian Open tennis championships in Melbourne.

Naomi Osaka walked off the court at the Australian Open with her second consecutive Grand Slam victory, cementing her rise to the top of the women's tennis world.

She defeated Petra Kvitova of the Czech Republic on Saturday, edging out a victory after losing the second set — a hitch that nearly derailed the 21-year-old player.

After winning the first set 7-6 (2), a visibly frustrated Osaka put her face in her hand during the second set, then covered her head with a towel as she walked off the court after losing 5-7. But she returned with renewed determination, sealing her victory with a 6-4 win in the third set.

"I felt like I didn't want to have any regrets," the Japanese player told reporters in Melbourne. "I think if I didn't regroup after the second set, then I would have looked back on this match and probably cried or something."

Saturday's victory in the women's singles final will catapult Osaka, ranked 72nd in the world this time last year, to number one in the Women's Tennis Association rankings. 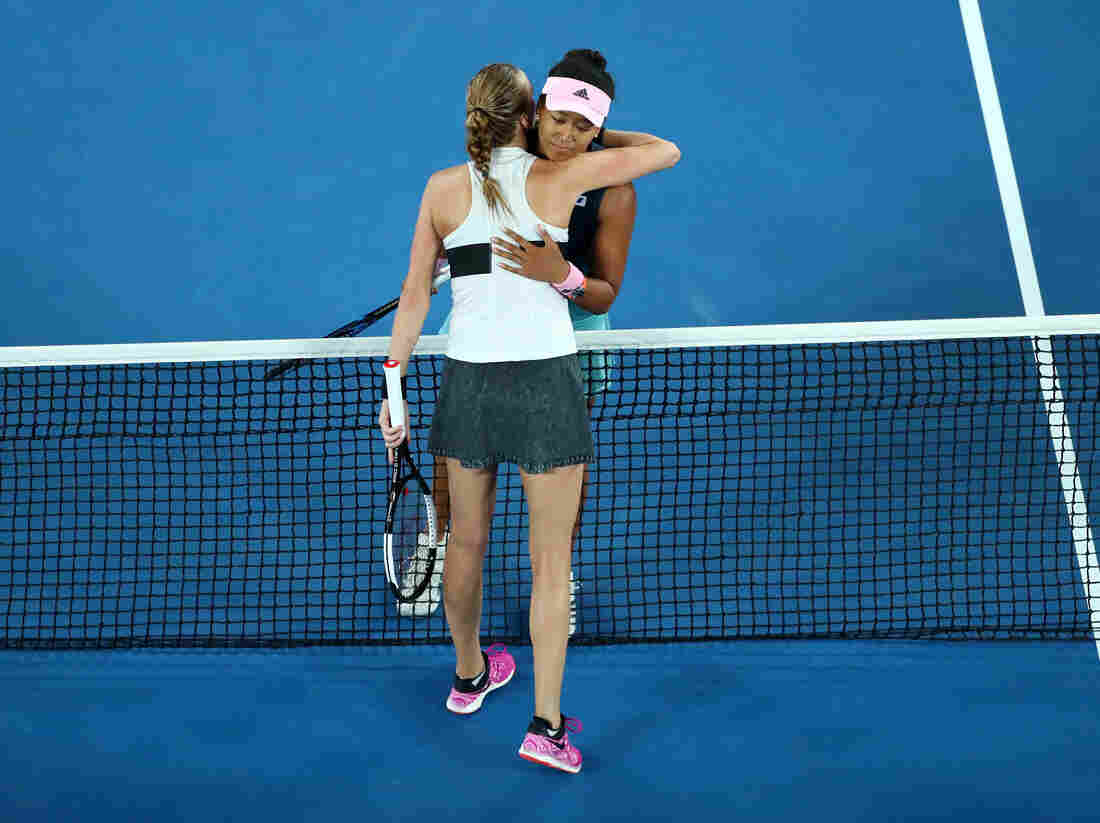 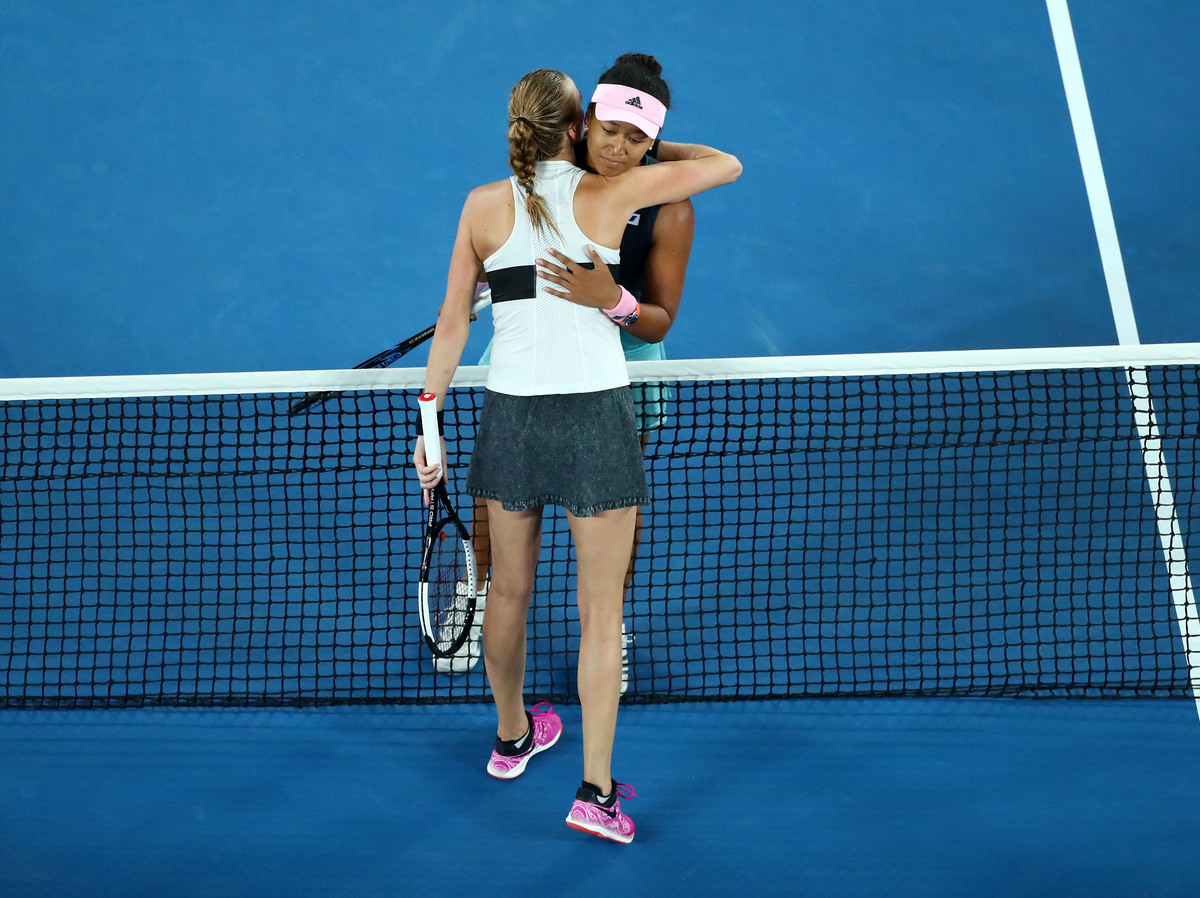 That will make her the first Asian woman to top the rankings, according to the Australian Open, and the first Japanese player of either gender. She'll also be the youngest woman to reach No. 1 in nearly a decade, following then 20-year-old Caroline Wozniacki's rise to the top in 2010, the Associated Press reports.

Osaka's last Grand Slam win — her defeat of Serena Williams at the U.S. Open in September — stirred controversy among fans. The referee issued a point penalty for Williams after she broke a racket, then a game penalty for arguing with him. Spectators booed.

Although that win marked the first Grand Slam singles victory to go to a Japanese player, the victory was bittersweet for Osaka, who idolized Williams. (Williams was eliminated in the quarterfinals of the Australian Open last Wednesday, dashing hopes of a rematch with Osaka.)

This time around, there were no jeers. ESPN's Howard Bryant says Saturday's contest saw a meeting of two champions.

"This was a match that ... you didn't want to see anybody lose," Bryant told NPR's Scott Simon.

Kvitova, who was playing in her first Grand Slam final since surviving a knife attack in her home in 2016, delivered a gracious and grateful speech during the trophy ceremony. 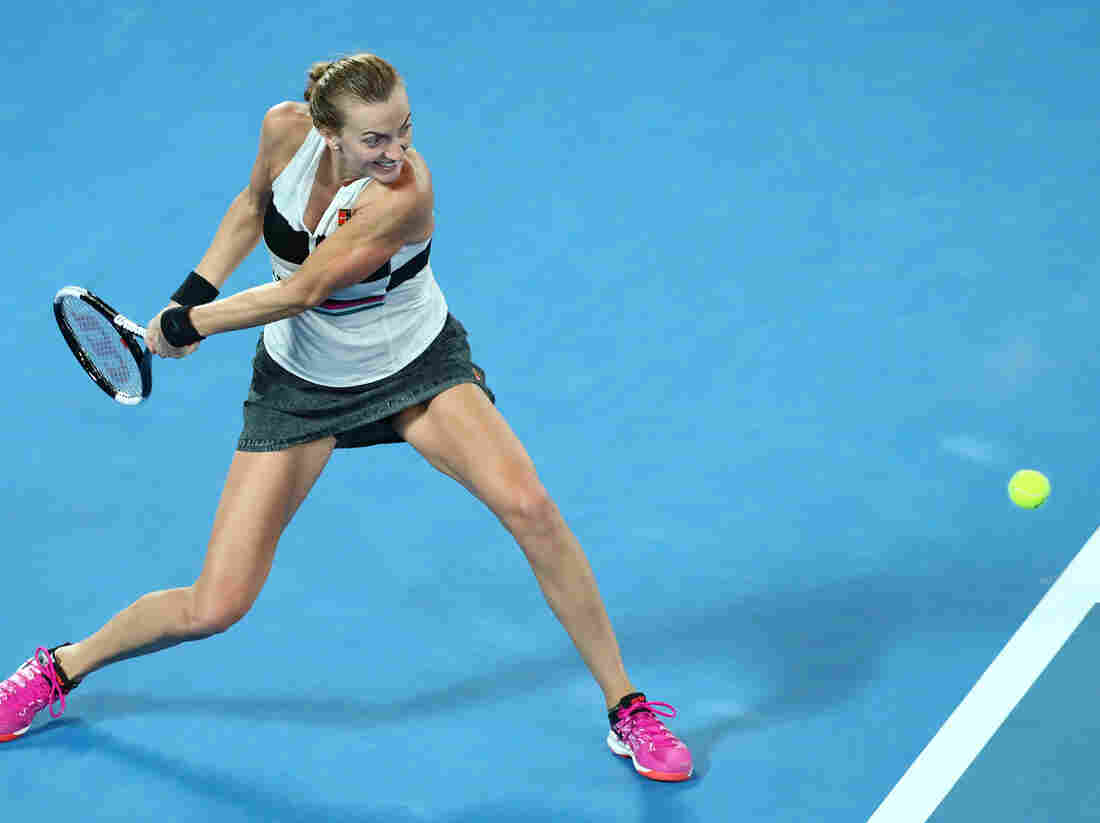 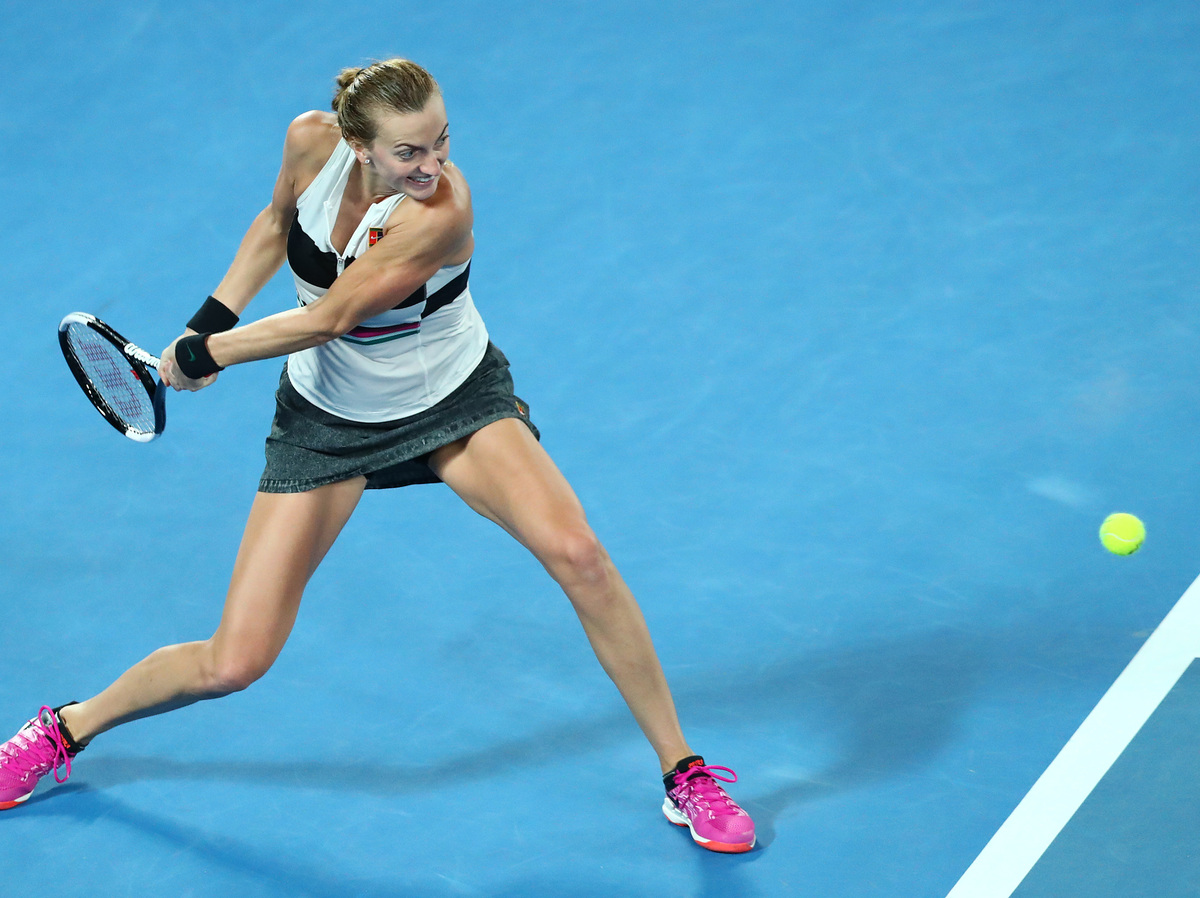 Petra Kvitova plays against Naomi Osaka in the Australian Open.

"To my team, thank you for everything, but mostly thank you for sticking with me even [as] we didn't know if I would [be] able to hold a racket again," she said, fighting back tears amid booming applause.

"We didn't even know if I would be able to hold the racquet again."@Petra_Kvitova's comeback story is one in a million 🌟#AusOpen pic.twitter.com/XLz2tc703i

"You've been through so much," Osaka told Kvitova in her address. "You're really amazing, and I'm really honored to have played you in the final of a Grand Slam."

Osaka broke the top 10 in the WTA rankings just last September and made her top five debut the next month. The Florida-based player's meteoric rise has been met with enthusiasm from Japanese fans, who see her as an inspiration.

"I never imagined in my lifetime that a Japanese player would reach No. 1," one fan, Daisuke Aizawa, told the AP. "Tennis is already popular here, but this will just add to its popularity and I'm sure more young people will take up the sport now."

Japanese Prime Minister Shinzo Abe even tweeted his congratulations, along with a picture of the victorious player.

Osaka was born in Japan to a Japanese mother and Haitain father and moved to New York at age 3, the AP reports. After her win, she laughed with reporters and admitted to being shocked by her own victory, but said she's not focused on the ratings.

"Maybe if I see my sister, you know, I can be like, guess who's the number one tennis player? Me," she joked.