Accessibility links
Amid Renewed Violence In Myanmar's Rakhine State, Arakan Army Returns To Spotlight Since December, clashes between Myanmar security forces and the insurgency group have been on the rise. At least 30 have died and thousands have been displaced. 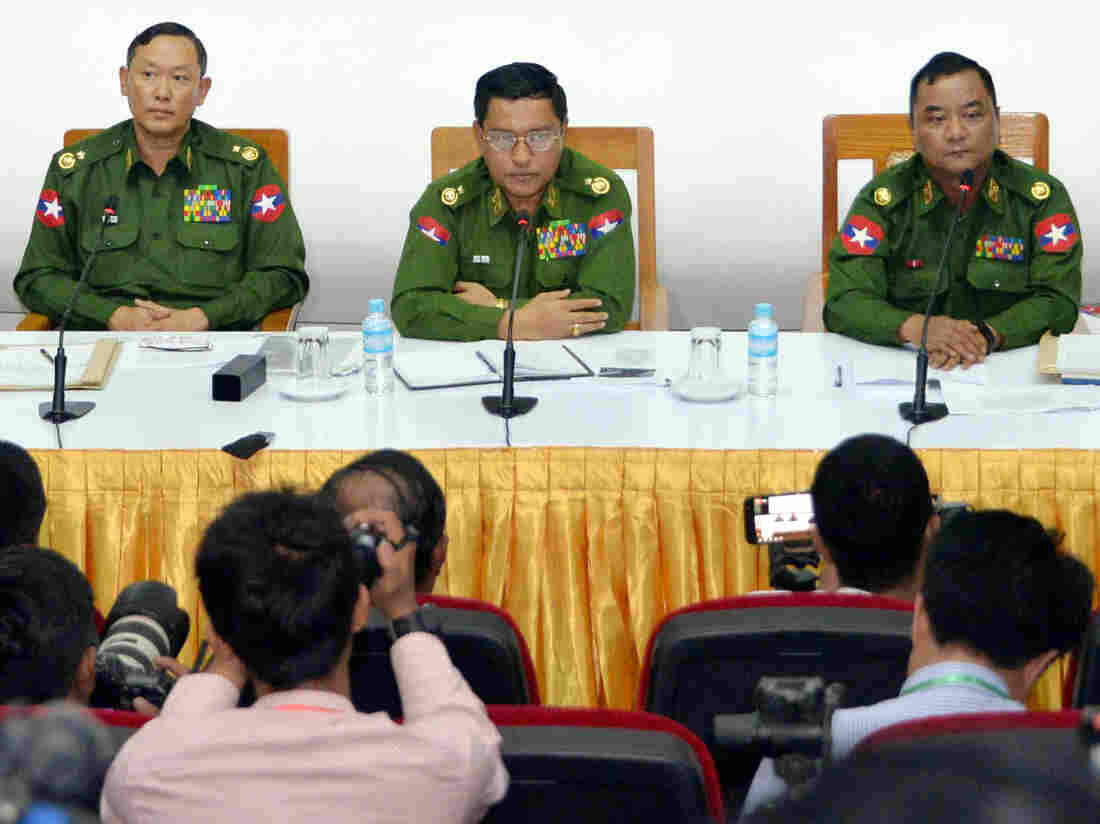 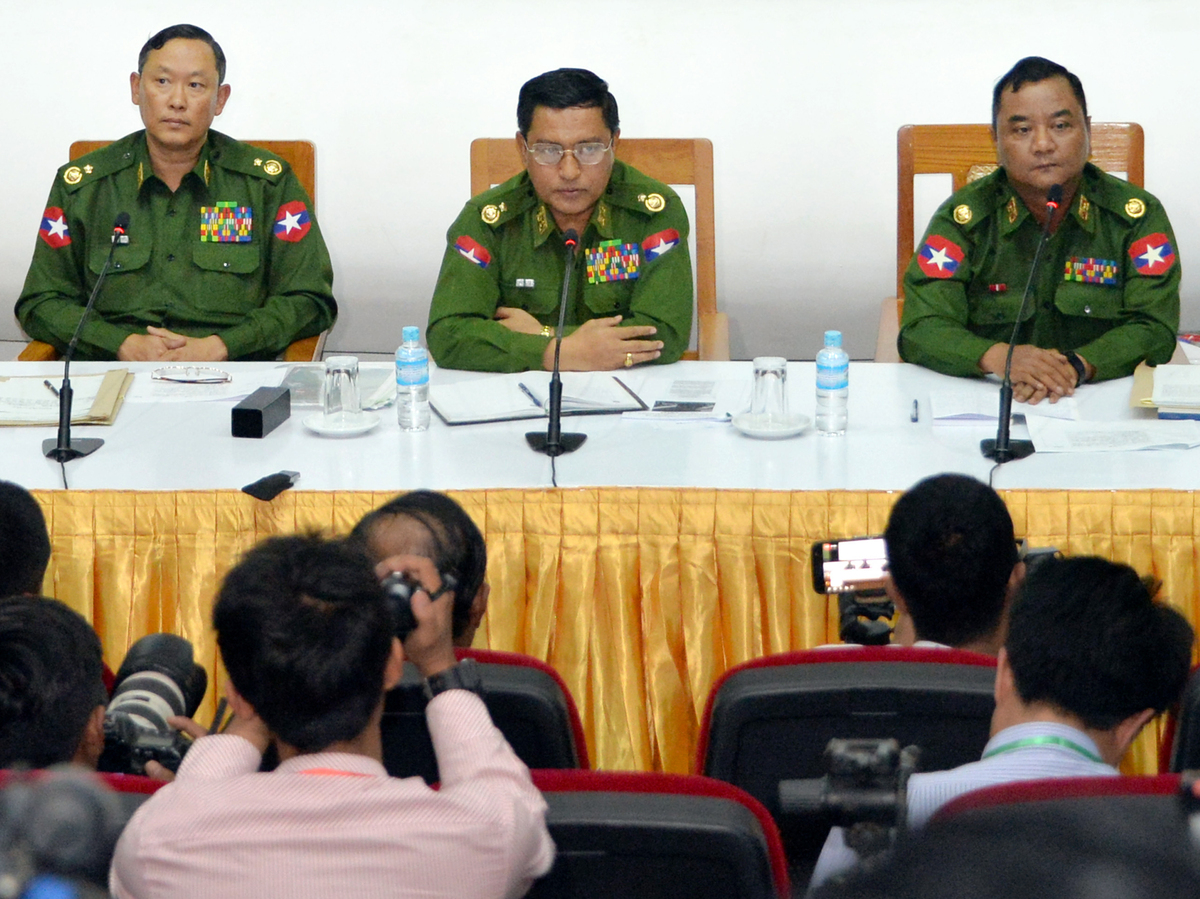 In recent weeks, Myanmar has seen renewed violence between security forces and an insurgent group called the Arakan Army. Since fighting broke out in Rakhine state in December, at least 26 military personnel and Arakan Army fighters have died and some 5,000 civilians have been displaced, according to the United Nations. It's the group's most prolonged period of violence with the military since its founding a decade ago.

The central government has been trying to broker peace and stop ethnic factions from targeting it for the past 70 years, leading some to call Myanmar's turmoil the world's longest civil war. Here's what to know about the Arakan Army and what the recent uptick in violence could mean for Myanmar's ongoing peace process.

What is the Arakan Army?

In the constellation of ethnic armed groups in Myanmar dating back to the country's independence from Great Britain in 1948, the Arakan Army is relatively new.

Founded in 2009 by Rakhine seeking self-governance, the Arakan Army is thought to have several thousand members. It claims to represent the people of Rakhine, an ethnic minority group that views its struggle in the context of a past in which it had its own kingdom and considers its loss a great national tragedy, says Aaron Connelly, a research fellow at the International Institute for Strategic Studies in Singapore.

The Arakan Army "has grown in size very rapidly, it appears to be well-funded and to enjoy a lot of support among Rakhine people," says Connelly.

The Arakan Army has clashed repeatedly with the military — more than 100 times since 2015, according to military officers. Its members are primarily Buddhist and the group's name derives from Rakhine state's original name. An independent kingdom until the late 18th century, Arakan came under British rule from 1826 to 1942 and was one of the most prosperous parts of the British empire in Asia, Yangon-based historian Thant Myint-U told NPR via email.

Although their names are similar, the Arakan Army is entirely separate from the Arakan Rohingya Salvation Army (ARSA), another insurgent group active in Rakhine. ARSA is primarily made up of Rohingya Muslim guerrillas and is blamed for attacks in 2016 and 2017 on police posts and military bases, which led to retaliation by security forces against the Rohingya. More than half a million Rohingya fled to Bangladesh after brutal crackdowns in those years.

What are the Arakan Army's goals?

In a recent interview, Tun Myat Naing, chief of the Arakan Army, told The Irrawaddy news site that "we wish to keep the sovereignty of our state in our hands." But Connelly notes the group has issued various statements about what it wants over the years, and it's not entirely clear which of those statements most accurately describe its goals today.

"They want increased autonomy or sovereignty for Rakhine state," Connelly says. "They say that they want to be part of a confederation; it's not entirely clear what that means."

When Myanmar, formerly known as Burma, gained independence from Britain, the Arakan — like many ethnic groups — wanted to maintain control over their own land, says Hunter Marston, a Myanmar expert formerly with the Brookings Institution.

It was, Marston says, "a sort of federal union that never really bore out in practice. So in the early '50s, a lot of these groups took up arms and fought against the central government."

Since independence, Arakanese nationalist feeling has grown, says Thant Myint-U. That sentiment is "grounded in memories of long-ago independence and more recent oppression, isolation and impoverishment," he says.

Rakhine is one of the least developed states in Myanmar and fares poorly on most social development indicators, according to UNICEF.

"Since the 1940s, their state has been in steep decline, with each generation poorer than the last," says Thant Myint-U. "Tens of thousands of Arakanese men have migrated overseas or north to work the jade mines, in appalling conditions, near China."

With the beginning of democratic politics in 2010, new Arakanese political parties were able to turn rising nationalist feeling into votes, he says. Arakanese politicians won local elections in 2010 and 2015, but the ruling party installed its own government at the state level and didn't allow the Arakanese to take up leadership positions.

"For many Arakanese, there is a sense that democratic politics has betrayed them," says Thant Myint-U. "The Arakan Army has stepped into this vacuum."

Who supports the Arakan Army?

It's not entirely clear where the Arakan Army receives its financial support. A recent report by the International Crisis Group says it is allegedly involved in the illicit trade of yaba — methamphetamine — produced in Myanmar and sent into Bangladesh. The Arakan Army denies this.

Connelly says if the group is engaged in illicit trade, it is unlikely to be limited only to drugs.

Why has fighting escalated between Myanmar security forces and the Arakan Army?

In December, the Myanmar military announced a months-long ceasefire across five regions of the country — but Rakhine was excluded. Analysts say this state was left out because the military doesn't want the Arakan Army "to gain a foothold in the area."

At least 13 members of the Arakan Army and at least 13 security forces have been killed since December, according to the military.

On Jan. 18, the Myanmar army classified the Arakan Army as a terrorist organization. At a news conference, military officers said Suu Kyi ordered them to launch an offensive against the group. She "instructed us to defeat them effectively, quickly and clearly," Maj. Gen. Nyi Nyi Tun said. He also said Suu Kyi suggested she wanted to avoid being accused of religious prejudice for having attacked ARSA's Rohingya Muslim militants but not "Buddhist rebels."

How does the Arakan Army fit into the overall peace process in Myanmar?

As a relatively new group, the Arakan Army wasn't included in the national ceasefire negotiations that took place from 2011 to 2016, says Connelly.

"And the Myanmar army is not actually seeking — or they're not trying very hard — to include them in that process," he says. "And a big question over the peace process has been whether or not the army would eventually welcome them into the process."

Overall, Suu Kyi has made little progress in pulling together the different groups, says Marston, in spite of her rhetoric promoting national unity. He says the Arakan Army is treated differently than other groups.

Last month, he notes, the Arakan Army agreed to talk to the government.

"And yet following that sort of pledge to talk, the Myanmar military continued attacks in Rakhine state targeting the Arakan Army," he says. "So they clearly don't see the Arkan Army as as part of their larger ceasefire negotiations and have signed or pledged four months' ceasefire with different groups excluding the Arakan Army."