Accessibility links
Brewing In The Desert: Sake Finds An Unlikely Home In Arizona With the popularity of sake declining in Japan, makers have been looking to America for new markets. Now, a Japanese sake master has brought his recipe to Arizona and is winning international awards. 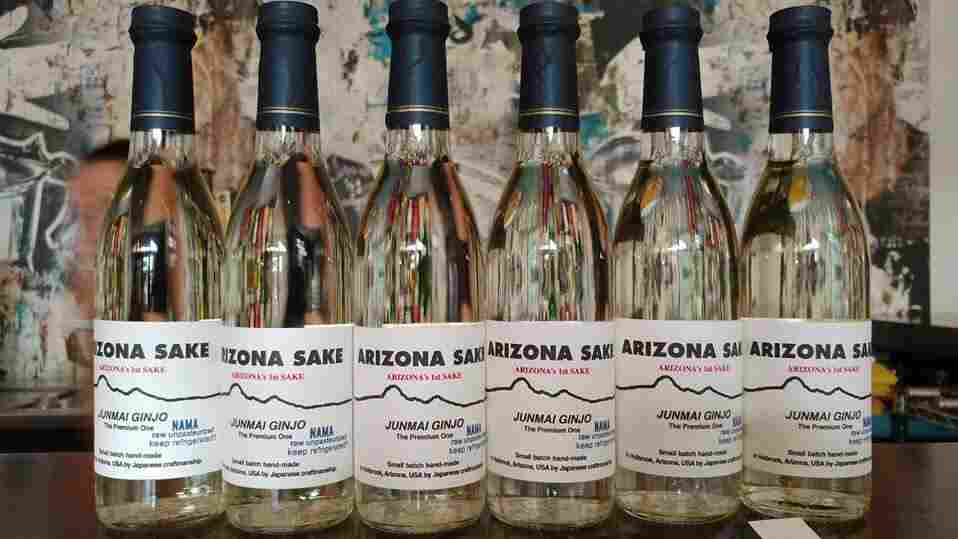 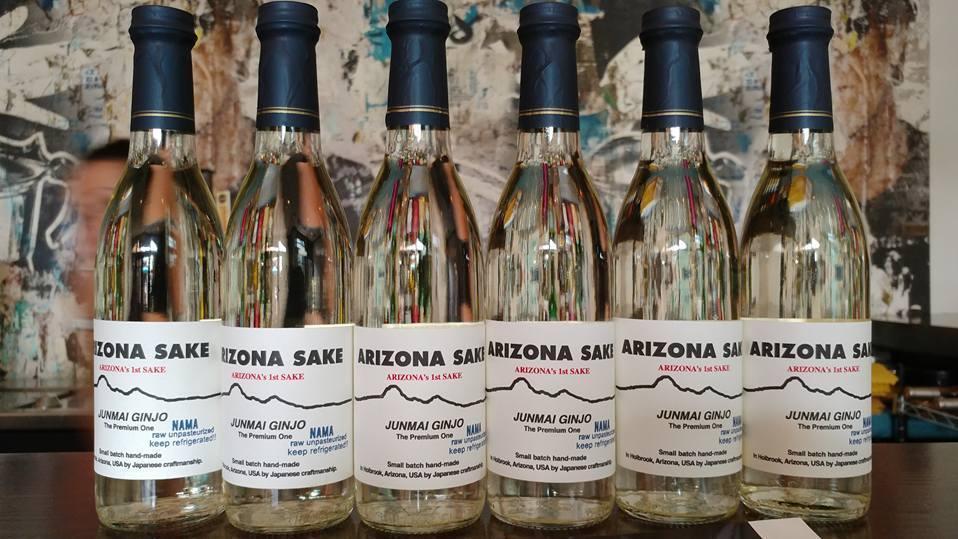 Arizona Sake won an international award last year for being the best sake brewed outside Japan.

Holbrook, Ariz., wasn't the ideal place for Atsuo Sakurai to set up a sake brewery. The town of 5,000 is like a snapshot of a bygone era; kitschy diners, vintage motels and mostly mom-and-pop shops line the main drag. It has zero Japanese restaurants.

But four years ago, Sakurai came here from Japan with his wife, a Holbrook native, to be closer to her family. That's when Sakurai established his company, Arizona Sake. His brewing space is tiny – about the size of an office cubicle – sealed off behind a door, in his two-car garage.

"Smell[s] like apple, and pear and melon. Like very fruity. This is the original sake flavor," says Sakurai. "So, I try to save this flavor in my premium sake."

Sakurai learned to make the rice-based alcohol in his home country of Japan. He spent a decade working at factories there, learning the ancient brewing methods. He passed a rigorous Japanese government exam and earned the highest title of first-grade sake brewer. When he ended up in Holbrook, he found brewing in the desert was a blessing in disguise.

"When I did a test batch, I figured out, 'Oh, the Arizona condition is really good to make sake,'" says Sakurai.

That's because the dry air provides less chance for mold to form during fermentation, a common problem in Japan's humid climate. Plus, the Holbrook tap water Sakurai uses comes from one of the best sources of groundwater in Arizona.

"The sake tasted like clear and pure and fantastic," says Sakurai.

So good, he thought, Sakurai submitted a bottle to last year's international Sake Competition in Tokyo. He won first place in the overseas category. Kenya Hashimoto was one of the judges.

"Arizona Sake was well harmonized and excellently balanced with the aroma and taste," says Hashimoto. "I thought the sake was made using high skills." 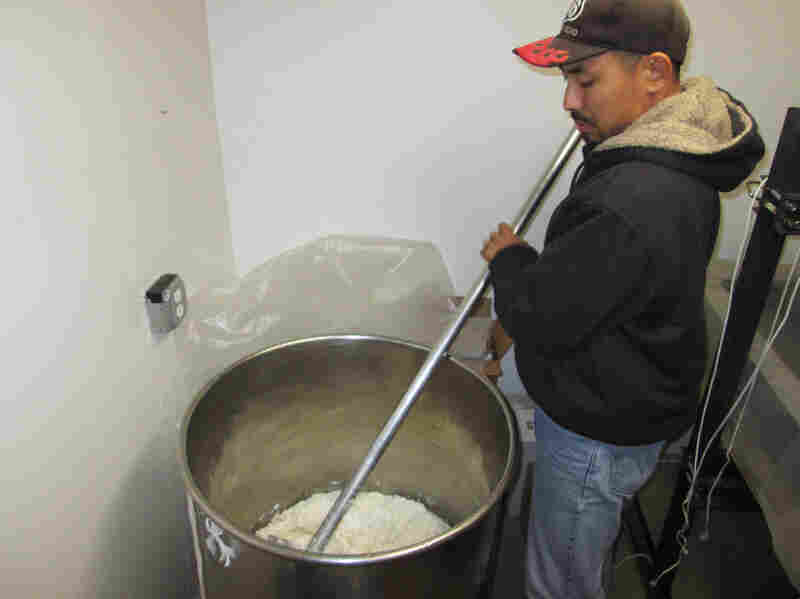 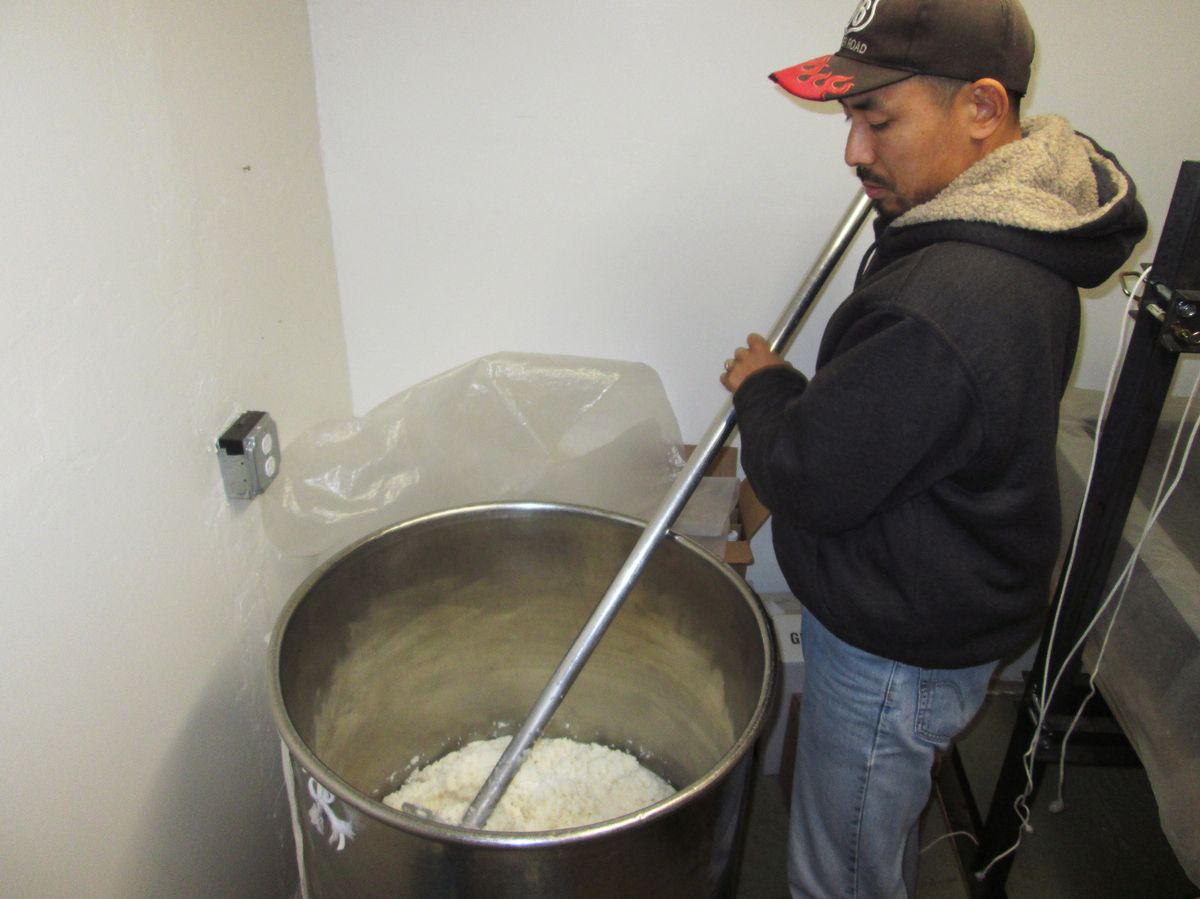 Atsuo Sakurai stirs a fresh batch of Arizona Sake at his home brewery.

Sakurai says after he won the competition, orders started to pour in. He sells his sake to about 50 liquor stores and restaurants around Arizona, including Karma Sushi in Flagstaff. Rebekah Kaufman just ordered a cup during happy hour. One sip, and her palate goes wild.

"I'm getting almost like a little bit of pear, but it's really smooth," says Kaufman. "It's definitely not overly sweet. It's perfect."

Sakurai says he hopes one day people in all 50 states will enjoy Arizona Sake. And, he insists it's not all about making money.

"My business is to get friendship, or you know, love or peace," says Sakurai.

Sakurai knows he'll need to move out of his garage to grow, and he plans to do so. He just broke ground on a new commercial property a few blocks away.