Accessibility links
The Census Bureau Needs To Hire Half A Million Workers For The 2020 Count The federal government continued hiring 2020 census workers through the government shutdown. But the low unemployment rate could result in an applicant pool smaller than the bureau would like. 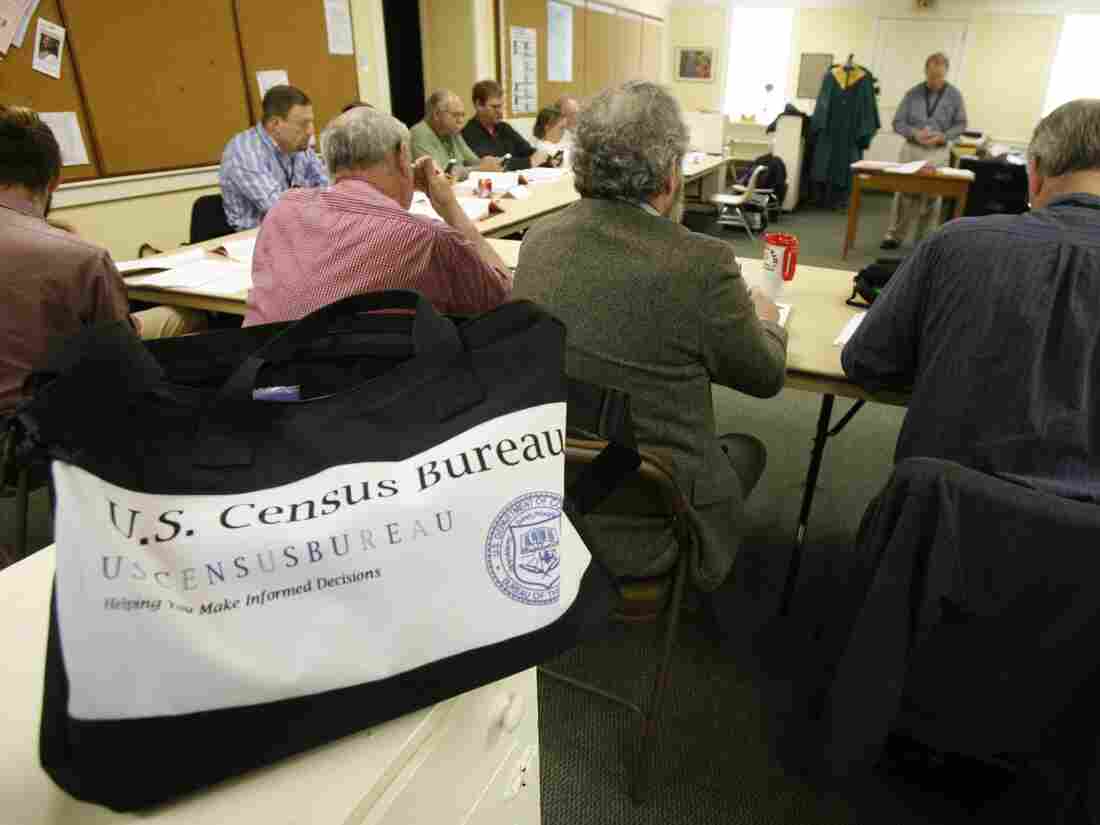 Workers for the 2010 census check computer data during a training session in 2009 in Dummerston, Vt. For the 2020 head count, the Census Bureau is trying to hire around a half million workers in a tight labor market. Toby Talbot/AP hide caption 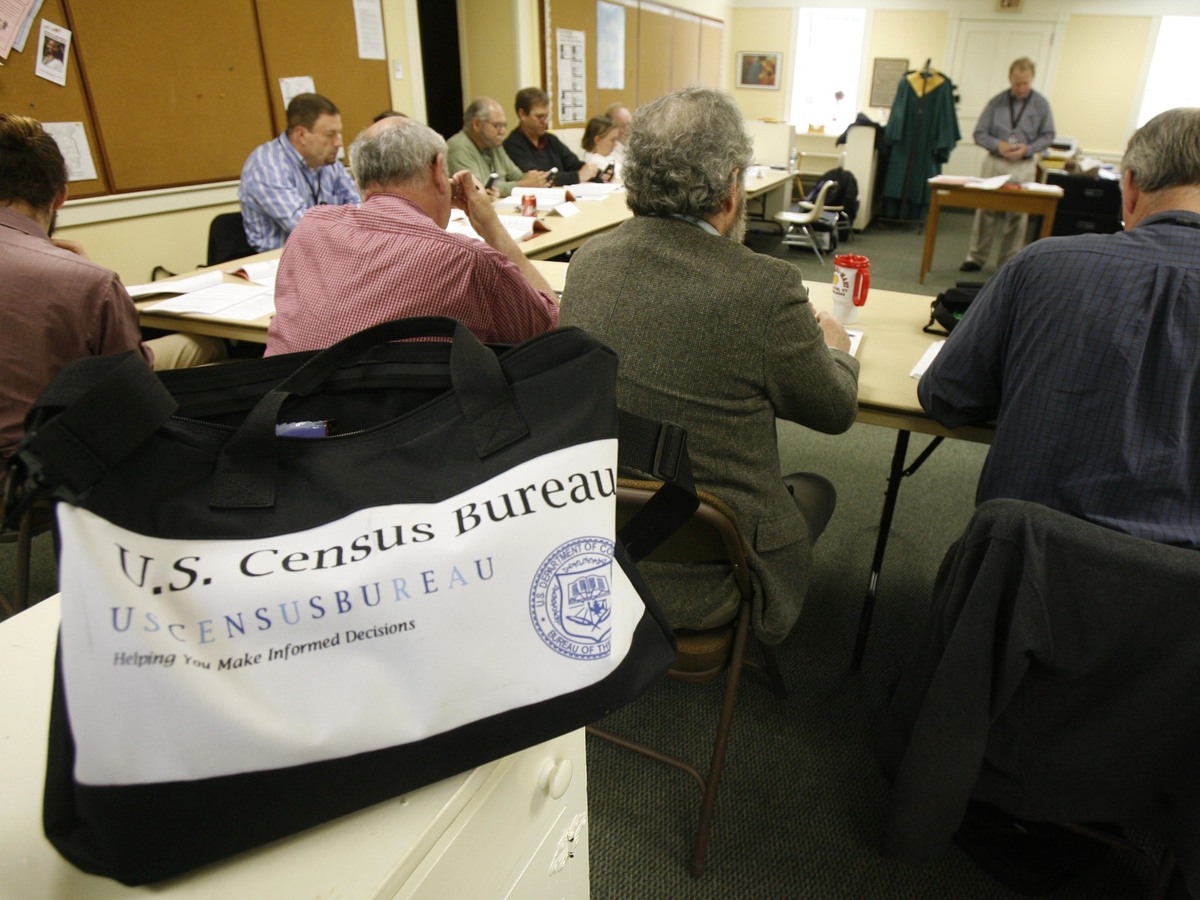 Workers for the 2010 census check computer data during a training session in 2009 in Dummerston, Vt. For the 2020 head count, the Census Bureau is trying to hire around a half million workers in a tight labor market.

While hundreds of thousands of federal workers were furloughed during the partial government shutdown, one federal agency was in the midst of a massive recruiting effort.

The Census Bureau has been busy trying to hire around a half million temporary workers to help carry out the upcoming national head count of every person living in the U.S. The census is set to officially kick off next January.

Funding carried over from last year kept census preparations going through the 35-day shutdown that ended Jan. 25. That includes processing applications received through the bureau's 2020 census jobs website that launched last September and staffing up census offices that are starting to open this month in communities around the country.

"The one thing that keeps me up at night is the one thing I have less control over, and that's our ability to recruit and hire," the Census Bureau's head of the 2020 census, Albert Fontenot, explained during a public meeting last year.

Census workers will play a critical role to make sure people who don't fill out a census form themselves by mail, phone or online get counted. Fewer than seven in 10 householders plan to take part in the census, according to a new report commissioned by the Census Bureau.

"The rate is cause for concern because the decennial census is designed to count every person in the United States," wrote the report's researchers, noting that the actual response rate may be lower.

Door-to-door follow-up visits by census workers help make up the most expensive part of the 2020 census. The head count is expected to cost a total of $15.6 billion. But the visits have helped the agency ensure that as many residents in the U.S. as possible are counted accurately and at their usual addresses.

The low unemployment rate, however, could result in an applicant pool smaller than the bureau would like for its openings for door knockers and other census positions.

An earlier round of hiring beginning in 2016 for partnership specialists — charged with encouraging the hardest-to-count groups, including communities of color, to participate in the census — encountered "smaller than expected applicant pools, declined offers, and turnover," according to a Government Accountability Office report released last year.

For last year's test run of the 2020 census in Rhode Island's Providence County, the bureau sent out into the field about 70 percent of the workers it planned to bring on.

Using smartphones to submit people's census information back to the bureau through the Internet did help boost the workers' productivity for the test run in Providence County. Still, Census Bureau officials say they plan to adapt their recruiting efforts for the actual head count.

More than 90,000 people have applied for 2020 census jobs through the bureau's website, and since late December, the agency has hired more than 680 workers. The bureau is expected to make a more high-profile push for job applicants through an advertising campaign set to launch in January 2020.

Census job postings have noted that U.S. citizenship is a requirement, as it is for most federal government positions. For past head counts, however, the Census Bureau has received exemptions to hire noncitizens with special language or cultural skills to serve as translators and in outreach positions.

"There is not a ban" on hiring noncitizens, the Census Bureau's public information office emphasized in a written statement from June. In a new statement, the agency says it's "still pursuing all legal flexibilities provided by Congress to hire the workforce we will need to conduct an accurate 2020 Census."

So far, however, the bureau has only hired U.S. citizens for the upcoming head count.

Some communities are doing their part in recruiting efforts by helping job seekers apply for census jobs. For now, many of the openings are for outreach specialists who work with local community groups, as well as for positions based in local and regional census offices.

Marzena Ermler, the career services manager at the New York Public Library, says she has been recommending census positions as a "bridge job" for some job seekers.

"We very often see a lot of mature job seekers who are transitioning from one career to another," explains Ermler, who is based at the Science, Industry and Business Library in Manhattan. "They, for whatever reason, are laid off, other jobs are over, and they need that quick access to cash."

Pamela Hudson recently stopped by the Bronx Library Center to meet with a career coach who helped her complete an online job application for a supervisor position.

Communities like the Bronx, she says, need to be counted accurately so that they get their fair share of the hundreds of billions of federal tax dollars distributed based on census numbers.

The partial government shutdown, however, did give Hudson pause about working for the Census Bureau. She noticed the bureau was not updating portions of its website during the shutdown because of "a lapse in federal funding," according to a banner splashed across the site.

"I'm concerned about that," Hudson says, wondering if census workers may not get paid if there's another funding stalemate.

In case there's another shutdown in the coming weeks, the bureau has said it has enough money to work on the 2020 census into April. 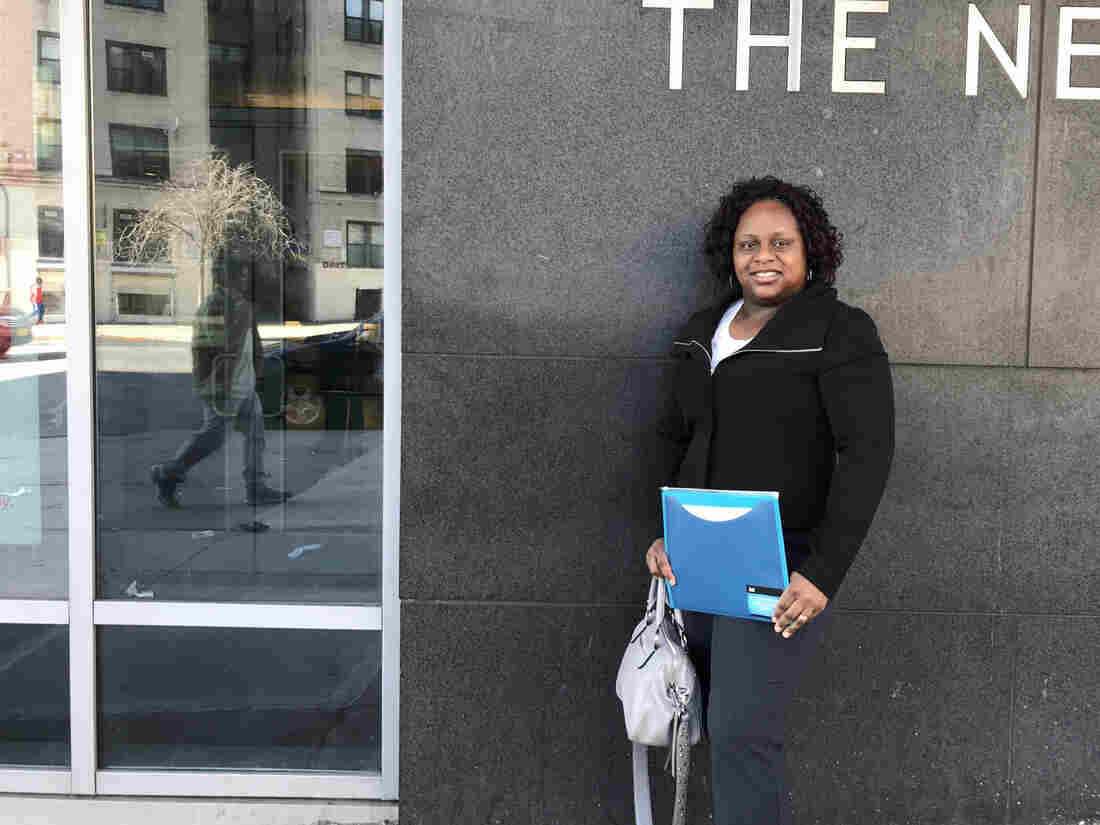 Tayesha Hudson recently met with a career coach at the Bronx Library Center in New York City to start applying for a 2020 census job. "I'm just interested in making sure my community is included in everything," says the Bronx native. Hansi Lo Wang/NPR hide caption 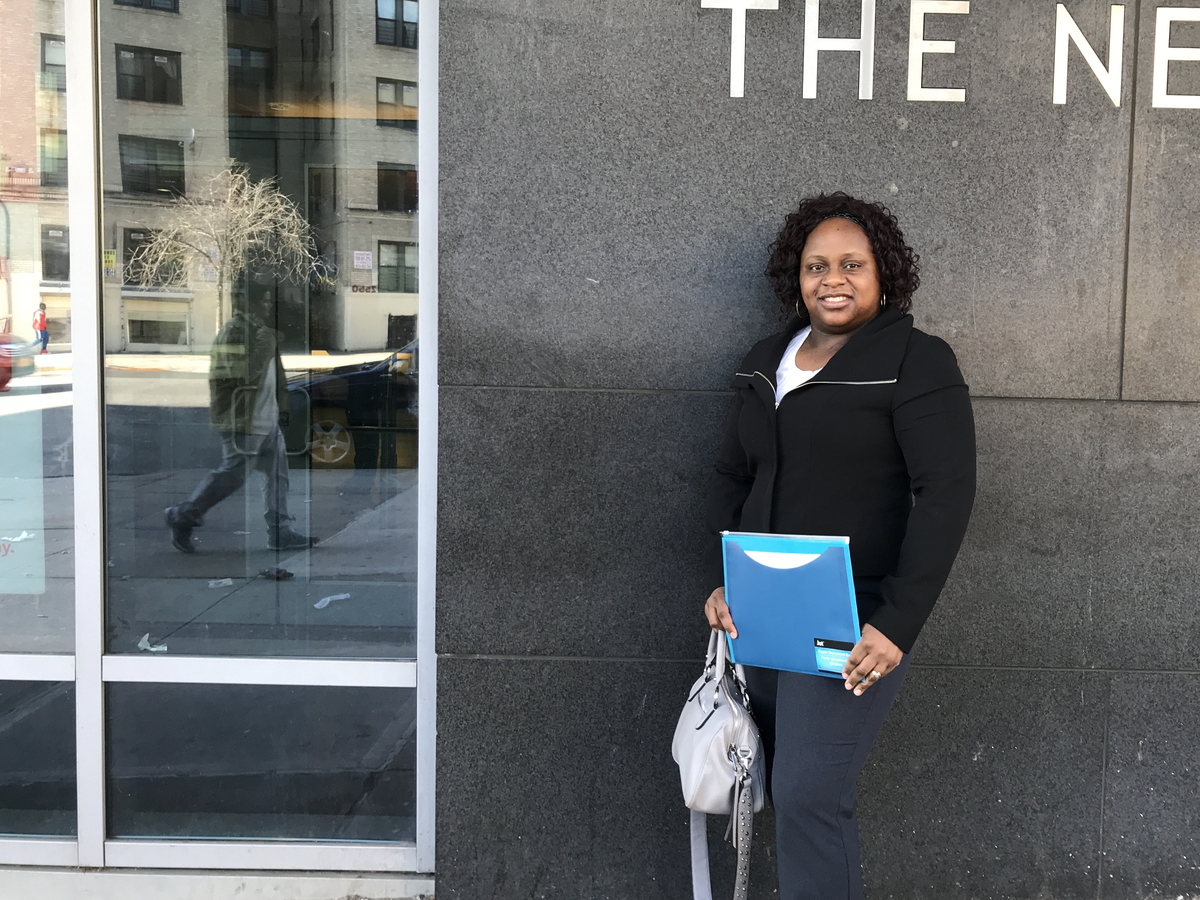 Tayesha Hudson recently met with a career coach at the Bronx Library Center in New York City to start applying for a 2020 census job. "I'm just interested in making sure my community is included in everything," says the Bronx native.

Whatever happens, Tayesha Hudson, no relation to Pamela, says she is not worried.

"I know eventually the government is going to have to get it together, and I know that they're going to want this 2020 census to go forward," she says.

Tayesha Hudson is interested in helping with door-knocking and collecting census information in the Bronx. If she is hired for the job, though, she expects to do a lot of persuading of community members who, she says, may not see the point of participating in the census.

We're all in this life just trying to make sure that we can go day by day, so we all should be counted.

"It's about making sure that we get the things that we need in our community, that everybody is counted regardless of their race, regardless of whether or not they're a citizen," she says. "We're all in this life just trying to make sure that we can go day by day, so we all should be counted."

The challenge of the citizenship question

The controversy over the citizenship question the Trump administration wants to add to the 2020 census could pose another challenge to recruiting and hiring. The question asks, "Is this person a citizen of the United States?"

If it does, many census workers will have a harder job, says Elzie Wright, a program coordinator for the Christopher Rose Community Empowerment Campaign, based in Brooklyn.

"They know that they probably won't get too many answers or too many participants, especially now in this environment," explains Wright, who has worked on outreach to the Haitian community in Brooklyn. "Let's face it: There's a lot of undocumented people in the community. And that makes them suspicious to talk to anybody."

The Census Bureau is expecting fewer households to respond to the census if there is a citizenship question. It plans to use results from an upcoming field test of people's responses to the question to update its recruiting strategy as the head count draws closer.

That means the bureau could have to hire even more workers.

Because of incorrect information provided by the Census Bureau, a previous Web version of this story said the 2020 census advertising campaign is set to launch in November. In fact, it is scheduled to start in January 2020.