Accessibility links
Trump's State Of The Union Rescheduled For Feb. 5 After New Pelosi Invite The initial Jan. 29 date was postponed amid the record 35-day partial government shutdown. With the government reopened, for at least three weeks, Trump is sure to push for the border wall he wants. 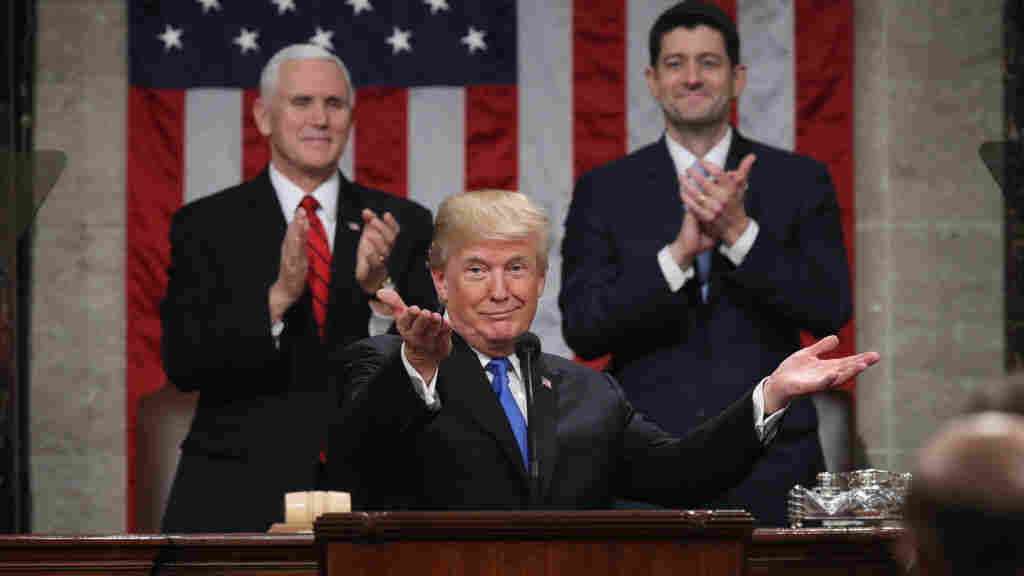 President Trump delivers the State of the Union address in January 2018 as Vice President Pence and then-Speaker of the House Paul Ryan look on in the chamber of the House of Representatives. Win McNamee/AFP/Getty Images hide caption 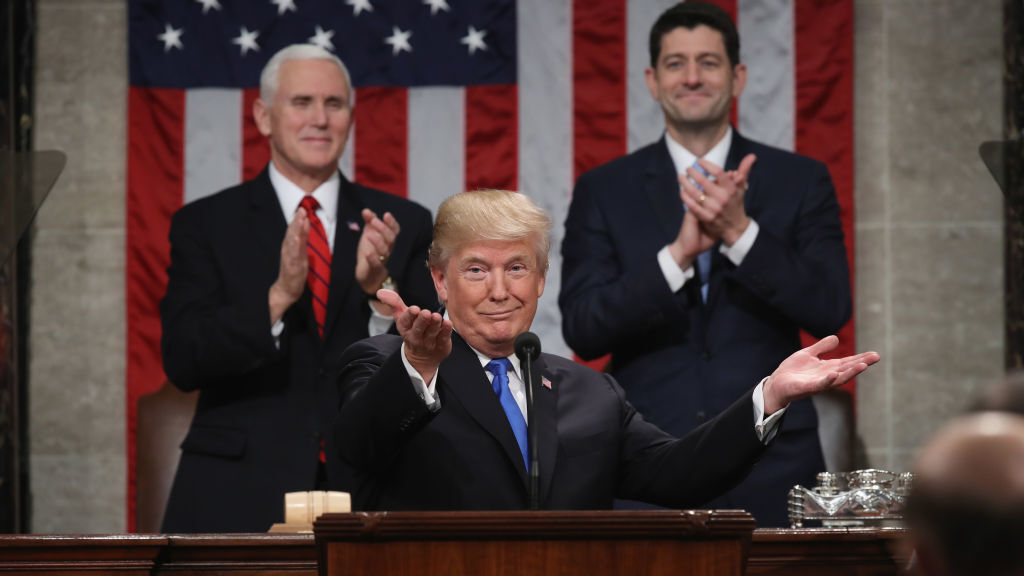 President Trump delivers the State of the Union address in January 2018 as Vice President Pence and then-Speaker of the House Paul Ryan look on in the chamber of the House of Representatives.

With the government reopened — at least for now — following a 35-day partial government shutdown, President Trump's State of the Union address has been rescheduled for Tuesday, Feb. 5.

In a letter sent to the president on Monday, House Speaker Nancy Pelosi, D-Calif., wrote that the two had agreed upon the new date next week, after she had postponed her original offer of Jan. 29 amid the shutdown.

"When I wrote to you on January 23rd, I stated that we should work together to find a mutually agreeable date when government has reopened to schedule this year's State of the Union address. In our conversation today, we agreed on February 5th," Pelosi wrote. "Therefore, I invite you to deliver your State of the Union address before a Joint Session of Congress on February 5, 2019 in the House Chamber. Thank you for your attention to this matter."

Trump responded with a letter of his own, accepting the new invitation. "Thank you for your letter inviting me to deliver the State of the Union Address before a joint session of Congress on Tuesday, February 5, 2019," the president wrote to Pelosi. "It is my great honor to accept. We have a great story to tell and yet, great goals to achieve! I look forward to seeing you on the 5th."

The annual address to Congress was a casualty of the longest government shutdown in U.S. history, which finally ended Friday. Earlier this month, Pelosi wrote to Trump rescinding her initial offer of Jan. 29, citing security concerns as both the Secret Service and Department of Homeland Security officials were working without pay during the partial shutdown.

Trump initially pushed back, tweeting that "It would be so very sad for our Country if the State of the Union were not delivered on time, on schedule, and very importantly, on location!" The White House was also reportedly looking at other locations for the major speech, but then last Wednesday, Trump agreed with Pelosi that his address should wait until the government was reopened.

"[There] is no venue that can compete with the history, tradition and importance of the House Chamber," the president tweeted. "I look forward to giving a 'great' State of the Union Address in the near future!"

Trump's speech is likely to focus heavily on immigration and his continued push for a wall along the Mexican border — which was the sticking point in spending negotiations that led to the partial shutdown in the first place. But the president backed down on Friday; Trump agreed with congressional leaders to reopen the government for three weeks as negotiations over funding for border security and other aspects of immigration policy continue with a bipartisan group of lawmakers from both the House and the Senate.

But if those talks don't produce a breakthrough or a compromise suitable to Trump, the country could be facing another partial shutdown, with funding for the agencies and departments that had been affected set to expire Feb. 15. Trump hinted as much in his speech in the Rose Garden last week, saying that if discussions don't result in funding for the wall or steel barrier he has made the hallmark of his administration, "the government would either shut down again" or he could declare a national emergency to build a Southern border wall.

The national emergency route is something Trump has floated for weeks and is an idea sure to be challenged in court. "I have a very powerful alternative, but I didn't want to use it at this time. Hopefully it will be unnecessary," Trump teased on Friday.

White House press secretary Sarah Sanders didn't deny the possibility of another shutdown during a rare briefing on Monday with reporters.

"The president doesn't want to go through another shutdown. That's not the goal. The goal is border security and protecting the American people," Sanders said. "Ideally, Democrats would take these next three weeks to negotiate in good faith, as they've indicated that they would, and come up with a deal that makes sense, that actually fixes the problem, so we don't have to go through that process."