Accessibility links
Even In His Own Memoir, 'Let Me Finish,' Chris Christie Gets Upstaged By Trump In his book, he says the transition team head is "the second biggest job in American politics" — and it is clear he took it on like he would have the top job, as if the shiny new presidency were his. 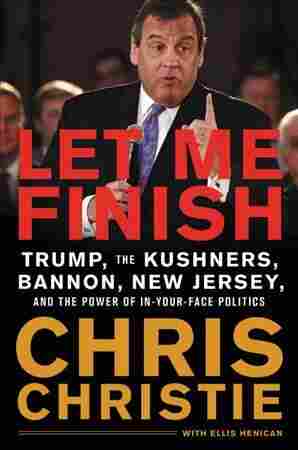 Trump, the Kushners, Bannon, New Jersey, and the Power of In-your-Face Politics

If you've been missing the force of Chris Christie's personality since he returned to private life last year, you can now get your fix at full blast from his autobiography, Let Me Finish.

But if you are looking for introspection or deep thoughts, look elsewhere. This is a big, loud book by a man with a full head of steam, stories to tell and scores to settle.

The 400-page tome's subtitle lays out the agenda: Trump, the Kushners, Bannon, New Jersey, and the Power of In-Your-Face Politics.

You can expect an earful about all the above, but Christie's main beef is with Jared Kushner, the son-in-law of President Trump. Christie blames the young Kushner for ousting him from Trump's inner circle. He specifically means his removal as chairman of the transition team managing the move from campaign mode to governing, which we are told explains pretty much everything that has gone awry since.

Christie is still in the first seven pages of his introduction when he pounces on "the kid" (as he says the now-former chief strategist Steve Bannon calls Kushner). It's all about Christie having prosecuted Jared Kushner's father, Charles, for tax evasion and illegal campaign contributions a decade earlier when Christie was U.S. attorney for New Jersey.

How much should we care about Christie losing that transition job? Well, right there in the introduction we are told that the myriad problems of the Trump administration — "the amateurs, grifters, weaklings" with their endless "infighting and chaos" — could all have been avoided if only Christie had been there and his orderly transition plans had been followed.

"But that plan was thrown in the trash," mourns Christie. "Literally. All thirty binders were tossed in a Trump Tower dumpster, never to be seen again."

But they are often to be mentioned again in Let Me Finish. References to the Lost Transition recur often and dominate toward the end as Christie pile-drives the point.

How big a deal is being chairman of the transition? Christie calls it "the second biggest job in American politics, right behind being the candidate." And it is clear he took it on with the attitude he might have brought to the office itself, as if this shiny new presidency were his.

But by the end of the book, we are accustomed to hearing how much Christie mattered to Trump. How he helped pitch in to save the election night speech. How he saved the president by preparing him for debates with Hillary Clinton. How the president told him he "couldn't have done this without you." And finally, how the president, when showing Christie and his wife around the Oval Office for the first time, said: "This might have been you guys here if it hadn't been for Bridgegate."

Ah, Bridgegate. But before we get to Christie's pious exegesis on the nagging scandal known by that name, a word to readers who feel the need to check their own memories about Christie's showing in the 2016 Republican primaries. Was Christie that close to winning the nomination?

In a word, no. He dropped out in early February after netting 2 percent in the Iowa caucuses and 7.4 percent in the New Hampshire primary. But writing an autobiography lets a man explain a lot of things from his own perspective. So here we learn that Christie was the secret choice of Iowa's Republican governor (who unfortunately had promised not to endorse anyone publicly). And we are reminded that Christie got almost 20 percent in one poll in New Hampshire after his best debate performance. Sadly, though, that was just before he ran out of money for ads and the other candidates ganged up on him (including Trump, who made fun of him over Bridgegate).

So, Bridgegate. Christie devotes many pages to explaining how utterly innocent he was in the closure of several lanes of the George Washington Bridge in 2013. These lanes usually connect Fort Lee, N.J., with Manhattan across the Hudson River. The resulting massive traffic disruptions were ordered in retribution against Fort Lee's mayor, who had refused to endorse Christie's re-election campaign for governor. But Christie had nothing to do with it, apparently.

Two Christie associates did wind up being sentenced to prison for this, but months of probing found no evidence of his direct involvement. Nevertheless, the whole affair understandably remains a sore spot, and Christie tells us it was all meant "to take out [Hillary Clinton's] purported Number One rival" for the presidency after he had been on the cover of Time magazine.

Christie lays groundwork for this "Number One" claim by telling us about all the famous people who begged him to run in 2012. He speaks of "fifty billionaires" and the influential Koch brothers and even former Secretary of State Henry Kissinger — all beseeching him to seek that year's GOP nomination. But he wasn't ready, he tells us. In 2016, he was ready.

But in 2016, something else happens. Or someone else. At this point, we have to be a bit sympathetic. As in all autobiographies, the author himself is center stage. But even here, on a stage he has built for himself, Christie finds he must share the spotlight with Donald Trump.

"From a stylistic perspective, he was everything I was, but on jet fuel," Christie writes. "He was brash ... direct ... in your face. I was doing all the things I normally did and was good at doing. I was getting strong reviews from the pundits. Yet he was still dominating."

It is a cruel trick of fate that Christie should be eclipsed by someone so like himself. But, of course, fate will get still crueler before it is finished.

Let us hit pause and note here that the early portions of Christie's memoir are pretty standard autobiographical material. We hear of the humble origins in the New Jersey evoked by Bruce Springsteen. We see the Irish father and Sicilian mom, their sacrifices and rectitude and abiding love. This portion of the narrative is affecting, but it soon devolves into tributes to Christie exceptionalism — the flashes of his promise and legendary confidence.

As senior class president, he prevails over the principal in defending the prank of painting the class numerals on the school roof. After college and law school, he is drawn to politics but gets frustrated when he tries to move up too fast. But wait, there is another way, as he campaigns with candidates from the George H.W. Bush family in the 1990s and in 2000.

His eventual reward is to be appointed U.S. attorney for New Jersey, but not before he has physically confronted the acting governor of the state (a Republican) on an ocean pier to nail down his support. This kind of ultrapersonal showdown plays as though on loop throughout the Christie story — and encapsulates the Christie way.

After several of these chapters, Christie is just getting warmed up, but he can probably sense he has gone on too long without getting back to Trump.

Trump invites Christie to dinner at one of his places after Christie gets named U.S. attorney. The contacts with Trump continue as Christie gets elected governor and has all those people wanting him to run for president. At one point, Trump calls to ask about the bridge and tells him he believes his denials. Then they are on Republican debate stages together in 2015 and 2016. They become a kind of tag team, trashing rival Marco Rubio.

When Christie leaves the race, we hear how all the other candidates call and offer him all kinds of things for his endorsement. (Jeb Bush apparently offered to make him campaign chairman.) But Christie can see which way the energy is flowing. And he is only interested in two jobs: vice president or attorney general.

We get a good deal of detail on the process by which Christie loses out to Mike Pence for vice president and then we do all the dance steps again before he loses out to Jeff Sessions for attorney general. Sessions was the first senator to endorse Trump and, for a long time, the only one. But Christie quickly inserts that his endorsement of Trump came a bit earlier, making him "the first governor and the first major political figure of any kind" to do so.

Christie keeps us posted on all the jobs he was offered: secretary of labor, secretary of homeland security, ambassador to the Vatican, ambassador to Italy. He does agree to chair the Republican National Committee, but then that, too, is denied him.

He finally confronts Trump in a hallway and says goodbye. No more offers. No more consolation prizes. He congratulates Trump and tells him to just be himself. And he tells him a lot more in a 400-word gush that Christie offers up as though remembered verbatim. That is a technique we see from Introduction to Epilogue, as Christie reels off lengthy conversations as though from a transcript. Assuming he was not recording each of these in real time, he must have the auditory equivalent of a photographic memory. Either that, or he is comfortable simply enclosing his own recollections of past conversations in quotation marks.

In the end, like Shakespeare's King Lear, Christie is always "more sinned against than sinning."

So, again, he was utterly innocent in the infamous incident of the lane closures on the George Washington Bridge, and equally without fault in a state government shutdown in New Jersey that is still remembered for the news pictures of him sunning at his residence on a state beach closed to the public. Lastly, and most ironic, he loses his own inside lane with Trump just because he did his job as a law enforcement officer years earlier. What a world.

And to think how much better everything could have been.

In truth, Christie probably should have known that he couldn't have a surrogate presidency through those 30 binders and that such an orderly and systematic process wasn't for Trump or anyone like Trump. It might have been for Christie, or someone more like him.

Could Christie come back into Trump World? Stranger things have happened.

More likely though, this look at the past has an even longer view of the future. If down the road sometime, the Republican Party wants someone who is just as in-your-face and tough as Trump but ready to deal with the presidency from Day One, well, Chris will be not too far away — tanned, rested and ready.