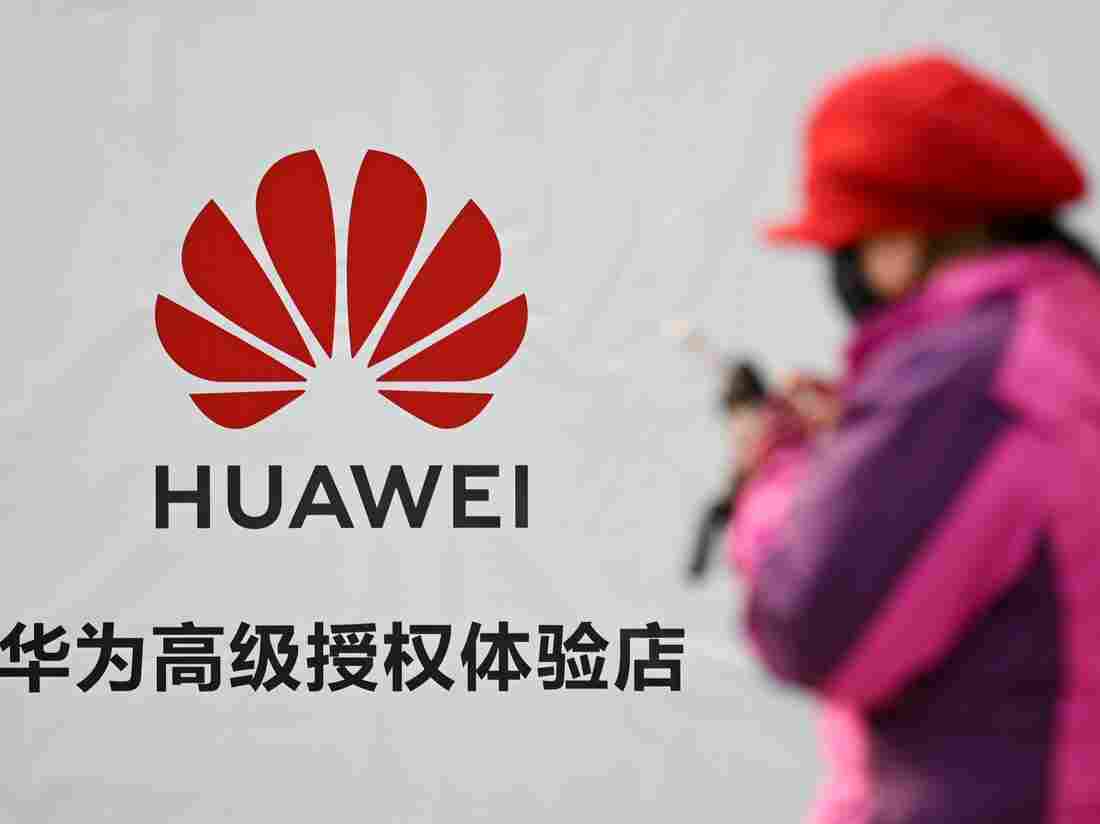 A Justice Department indictment unsealed on Monday details an alleged conspiracy by the Chinese device maker Huawei to steal the details of a T-Mobile robot. Here, a woman uses her smartphone outside a Huawei store in Beijing on Tuesday. Wang Zhao/AFP/Getty Images hide caption 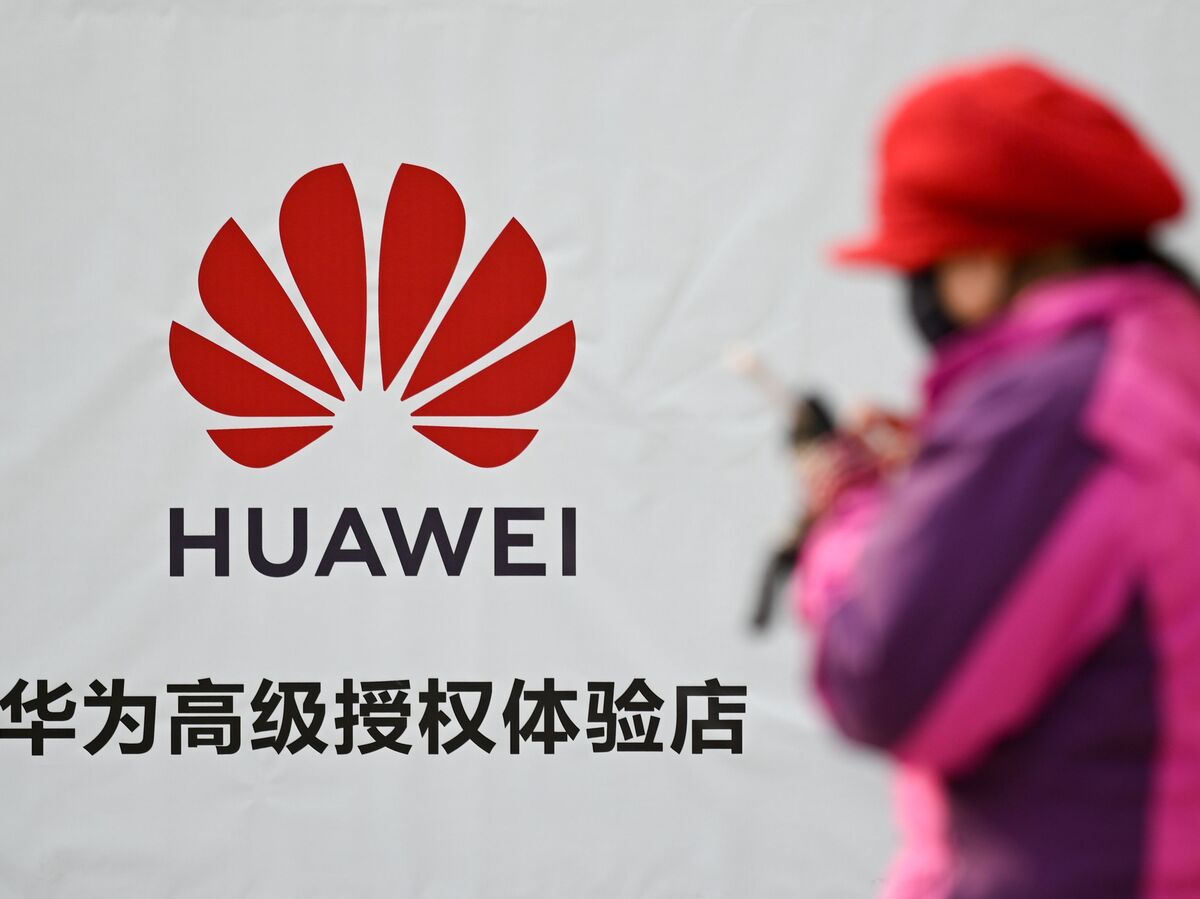 A Justice Department indictment unsealed on Monday details an alleged conspiracy by the Chinese device maker Huawei to steal the details of a T-Mobile robot. Here, a woman uses her smartphone outside a Huawei store in Beijing on Tuesday.

The Justice Department unsealed two separate indictments of Chinese telecom device maker Huawei on Monday. But only one of them reads like the script of a slapstick caper movie.

That would be the one that describes the U.S. government's case alleging that Huawei stole trade secrets from T-Mobile, the wireless service company.

In the indictment, the government says that between June 2012 and September 2014, Huawei repeatedly made efforts to steal information about the design of a T-Mobile robot. The robot's name, adorably, is "Tappy."

We would like to include a photo here of Tappy, but photographing the robot is expressly prohibited by T-Mobile, and Tappy is kept under very tight security in a lab at T-Mobile headquarters in Bellevue, Wash.

Tappy's job is to test devices before they go to market. With a rubber-tipped robotic arm, it touches the device screen, imitating a human using the phone — while at the same time tracking problems, measuring how long tasks take to complete, and monitoring how much battery is drained by each task.

At least at the time of the events in the indictment, Tappy was apparently the envy of other mobile companies, and only T-Mobile employees were allowed to operate Tappy. But eventually the company allowed employees from its phone suppliers to access and operate the robot – so long as they signed nondisclosure and confidentiality agreements. Those agreements specifically barred suppliers' employees from attempting to reverse engineer Tappy, or to take photos or videos of it.

Meanwhile, Huawei China was reportedly trying to build its own device-testing robot — named, less cutely, "xDeviceRobot" — and it was not finding much success. And Huawei's devices weren't faring well on T-Mobile's Tappy tests, failing more often than devices made by competitors.

In May 2012, Huawei USA asked if Huawei China could license the Tappy technology, and T-Mobile said no.

That's when Huawei began attempting to steal the design secrets of Tappy, according to the indictment.

On a June 2012 conference call, a Huawei China engineer made a list of questions for Huawei USA employees to answer, including technical specifications, photos from multiple angles, and component serial numbers.

Two months later, T-Mobile granted access to Huawei USA's engineers so they could test Huawei's phones before releasing them. Those engineers started asking questions about Tappy's workings to the T-Mobile engineers, who weren't forthcoming.

Huawei China allegedly continued to pester Huawei USA employees to dig up the intel, and they in turn continued to ask T-Mobile folks about Tappy's design. One of the Huawei engineers, known in the indictment only as "A.X.", took and sent unauthorized photos of the robot to Huawei China, but it wasn't enough, and they asked for more.

Huawei USA's Director of Technical Acceptance, identified as "R.Y.", wrote back to Huawei China: "Once again, we CAN'T ask TMO any questions about the robot. TMO is VERY angry the questions we asked." R.Y. suggested Huawei China send its own engineer to Bellevue to see Tappy in action.

An engineer, "F.W.", arrived from China. A.X. and another U.S. counterpart sneaked the visiting engineer into the lab to see and photograph Tappy. They were caught – twice, and F.W. was ordered out of the facility.

T-Mobile then banned Huawei employees from the lab, but relented and allowed A.X. access.

Then, in May 2013, A.X. allegedly made a very bold move, removing Tappy's arm and putting it in his laptop bag. T-Mobile employees confronted him about the missing arm. He denied having it, and that night he and F.W. measured and photographed the arm. The next day, A.X. said he had "found" Tappy's arm in his bag. It was then that T-Mobile finally revoked A.X.'s credential to the lab.

You might think the alleged hijinks end there. But they do not.

Huawei was very nervous about having been caught. Just a year before, the House Intelligence Committee had put out a report finding that Huawei was a potential threat to national security, with a "pattern of disregard" for U.S. intellectual property rights. And it had been sued by Motorola and Cisco for stealing IP.

Huawei China told T-Mobile that internal investigations in the U.S. and China "confirmed" that A.X. and F.W. had acted alone in the arm-borrowing episode, and that both employees were terminated for cause. Huawei then sent T-Mobile a redacted version of the investigation report, which allegedly contained false information intended to show that Huawei China had not asked for or orchestrated these events.

A civil lawsuit over the Tappy incident awarded T-Mobile $4.8 million in damages in 2017, The Associated Press reports. "Huawei said in an emailed statement Tuesday that it denies any violations of U.S. law, and that the Tappy allegations were already a settled matter between it and T-Mobile," according to the AP.

The Justice Department evidently has a juicy pile of Huawei emails with which to argue its case. But one detail from the indictment is perhaps the most telling of all.

In July 2013, even as it argued that the Tappy incident was the result of a couple rogue employees, Huawei China launched a formal policy of awarding bonuses to employees who stole confidential information from competitors. It emphasized, the indictment says, "that no employees would be punished for taking actions in accordance to the policy."