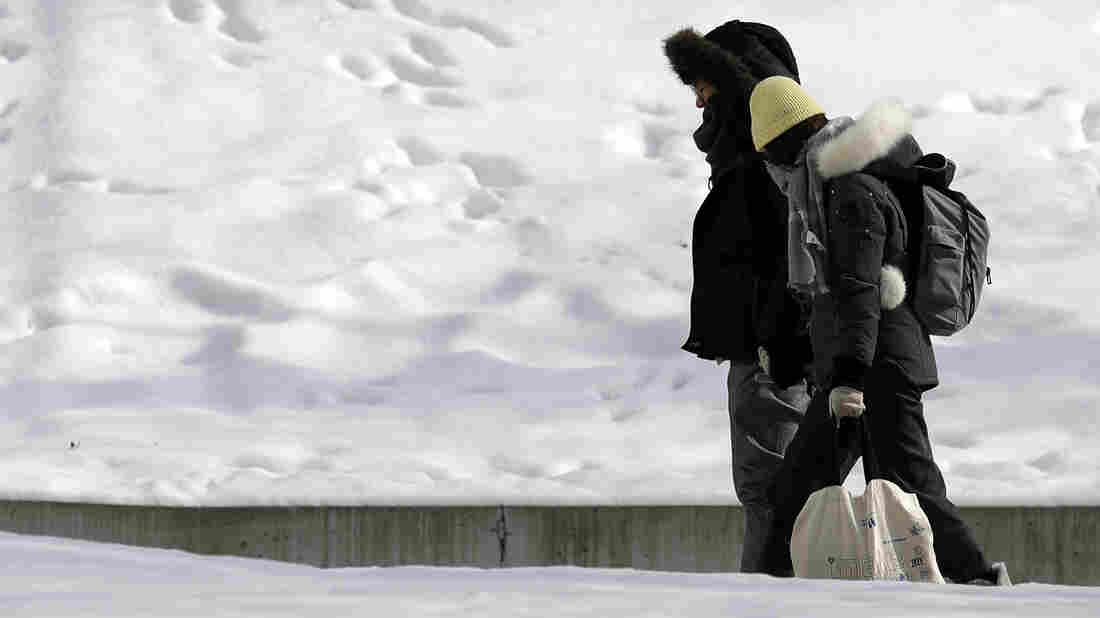 People bundled up against the cold in downtown Chicago on Sunday. Forecasters warned of dangerous weather conditions across a swath of the U.S. over the next several days. Nam Y. Huh/AP hide caption 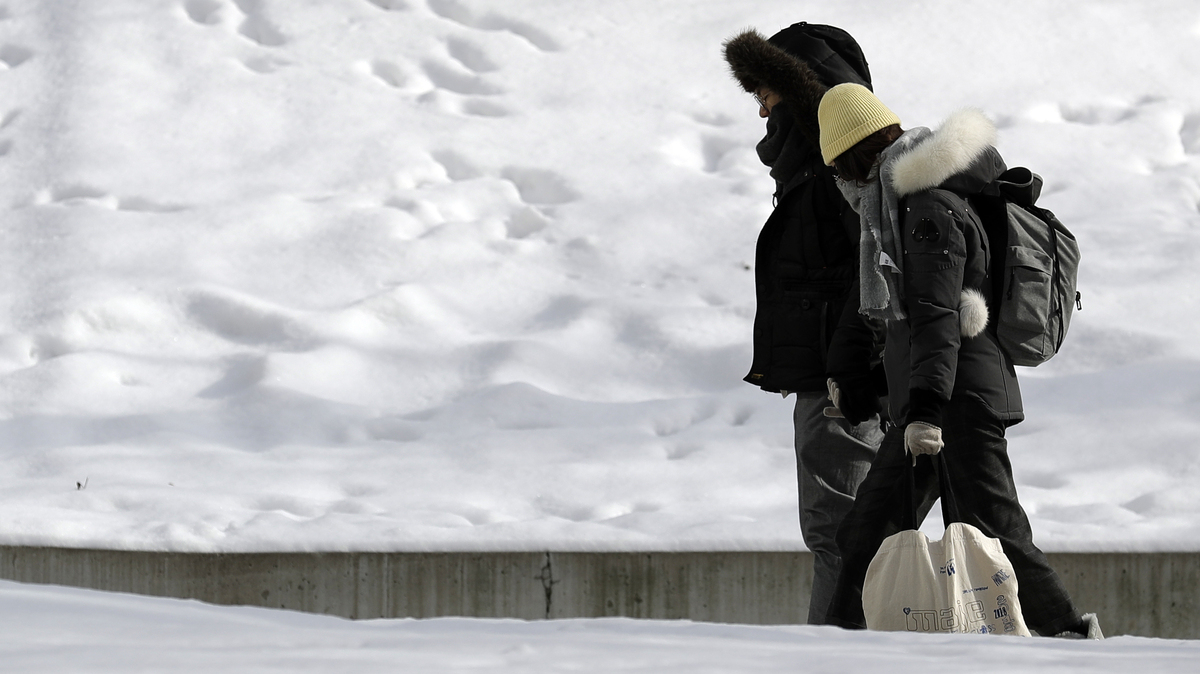 People bundled up against the cold in downtown Chicago on Sunday. Forecasters warned of dangerous weather conditions across a swath of the U.S. over the next several days.

Record-shattering cold, heavy snow and howling winds are descending on a broad swath of the U.S., the National Weather Service says. It's the result of one of the coldest arctic air masses to hit the country in recent memory, the agency says, forecasting bitter conditions in areas from the Upper Midwest to many Eastern states.

Warning of a "very dangerous and life-threatening arctic blast," the weather service predicts that the next several days could see "widespread record lows and low maximum temperatures from the Upper Midwest to the Great Lakes and Ohio Valley."

A Wind Chill Warning means the combination of very cold air and the wind will create DANGEROUSLY low wind chill values... and they're expected over the next two to three days across the warned area. pic.twitter.com/nb5TXwLlxd

Officials also are warning of horrible travel and road conditions, high temperatures that stay in the single digits and wind chills that dip far below zero.

Record cold temperatures are expected to be set in Detroit tomorrow and Thursday. #MIwx pic.twitter.com/l1SalfXyoA

In Michigan, Gov. Gretchen Whitmer has declared a state of emergency, urging people to limit the time they spend exposed to the elements and to check on the well-being of children, older neighbors and pets. Her office advised people to keep water dripping through vulnerable pipes to prevent them from freezing — and to set the thermostat to the same temperature for night and day.

"Keeping Michiganders safe during this stretch of dangerously cold temperatures is our priority," Whitmer said.

Here's our official snow gauge in @dustindwyer's #GrandRapids back yard. He says it's still coming down.

What are you seeing outside right now? #WinterStorm #snowday #PolarVortex2019 pic.twitter.com/bWJG1VEj2y

Frigid weather has already started to hit the Dakotas, Minnesota, Wisconsin and Illinois. It is expected to sweep into the Eastern U.S. in coming days, forcing residents and businesses, governments and schools to adapt to intensely low temperatures.

Wisconsin could see wind chill values from minus 30 to minus 50 degrees, Gov. Tony Evers said as he declared a state of emergency in his state Monday afternoon.

"When it gets this cold, nobody should be outside unless it is absolutely imperative for them to be outside," Douglas Brunette, an emergency room doctor at Hennepin Healthcare, told Minnesota Public Radio.

"Stay inside," Brunette said, warning of the heightened risks of frostbite and hypothermia. "Don't challenge nature."

As of Tuesday, more than 1,800 flights had been canceled and more than 8,000 had been delayed.

Federal government workers in the Washington, D.C., area were allowed to leave two hours early, according to the Office of Personnel Management.

In the Southeast, predictions of perilous weather prompted Delta Air Lines to cancel 170 flights out of Atlanta on Tuesday. Member station WABE's Susanna Capelouto says it was a pre-emptive move and that travelers will be allowed to change their flights without a penalty.

"It's Super Bowl week in Atlanta, so a forecast of possible snow late this morning caused schools and governments to close for the day," Capelouto reports for NPR. "Icy weather is taken seriously here, as just five years ago, thousands of motorist were stranded on highways after a midday snowfall."

Around 1 p.m. ET, the National Weather Service office in Atlanta canceled its winter weather advisory for counties in northern Georgia but warned that patches of black ice could still pose a threat.

Alabama Gov. Kay Ivey declared a state of emergency for all of her state's counties Monday, well in advance of the brunt of the storm. As member station WBHM reports, many school systems and city and county offices have since been closed because of expected snow.

"Due to the extreme cold and heavy snow predictions, all crime and doing really dumb things has been cancelled until further notice," the Priceville Police Department in Alabama joked in a post on Facebook.