Accessibility links
United States Warns Americans Not To Travel To Venezuela As Tensions Rise The U.S. supports the main opposition leader who has been barred by Venezuela's Supreme Court from leaving the country. 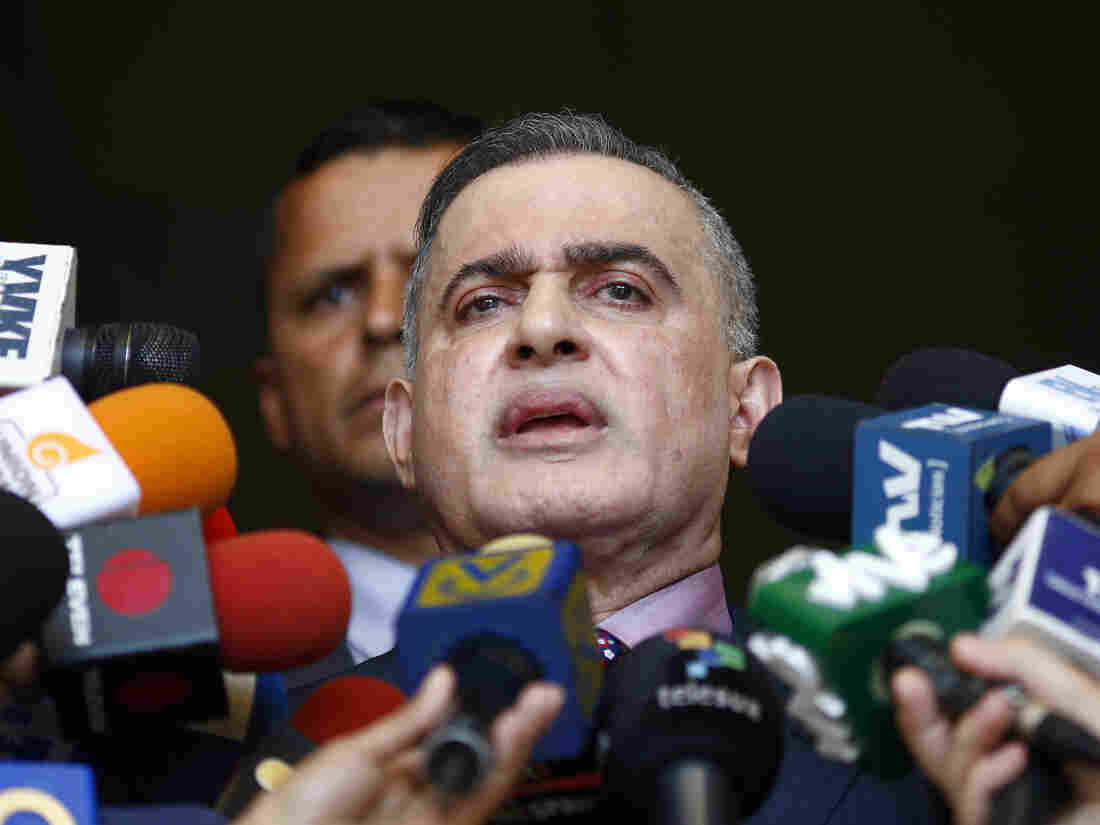 Venezuela's top prosecutor, Tarek William Saab, talks to reporters in Caracas on Tuesday. He announced that Juan Guaidó, now President Nicolás Maduro's most prominent opponent, is barred from leaving the country because of an investigation. Marco Bello/Getty Images hide caption 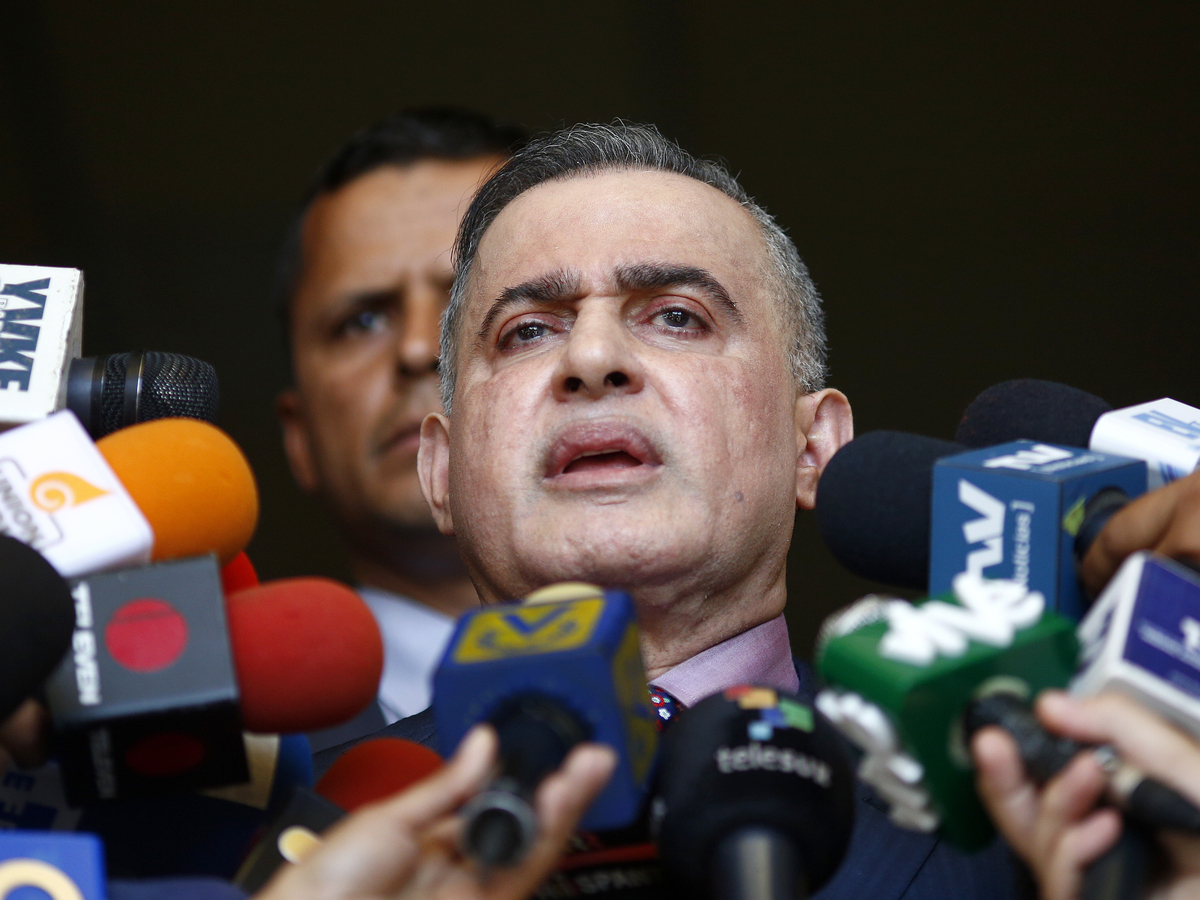 Venezuela's top prosecutor, Tarek William Saab, talks to reporters in Caracas on Tuesday. He announced that Juan Guaidó, now President Nicolás Maduro's most prominent opponent, is barred from leaving the country because of an investigation.

The State Department warned Americans on Tuesday not to travel to Venezuela, citing crime, civil unrest and the arbitrary detention of U.S. citizens. It came the same day that Venezuela's top prosecutor announced that the opposition leader, whom the United States supports, is being investigated and barred from leaving the country.

"Security forces have arbitrarily detained U.S. citizens for long periods," the travel advisory stated. "Venezuelan authorities may not notify the U.S. Embassy of the detention of a U.S. citizen, and consular access to detainees may be denied or severely delayed."

The warning was released in the aftermath of protests racking Venezuela and as tensions between Washington and Caracas have escalated after President Trump voiced support for Juan Guaidó.

The 35-year-old opposition politician recently proclaimed himself interim president until free elections could take place. In early January, he was elected the president of the National Assembly, a legislative body the U.S. State Department considers to be the "last remaining democratically elected institution." Guaidó says President Nicolás Maduro's second term is illegitimate because of a fraudulent presidential race.

On Monday, seeking to bolster Guaidó's power, Treasury Secretary Steven Mnuchin and national security adviser John Bolton announced sweeping sanctions aimed at weakening Maduro's grip on the oil-rich country: All assets of state-owned oil company PDVSA that are subject to U.S. jurisdiction will be frozen and all U.S. citizens prohibited from trading with the company.

More than 100 individuals, entities and aircraft have been designated as blocked property, according to the White House.

But come Tuesday, the oil company was attempting to bypass the sanctions by asking purchasers to revisit contracts, Reuters reported:

"PDVSA began calling customers ahead of the sanctions, urging them to swap foreign fuel and other products for its Venezuelan crude cargoes, the sources said. It is also considering asking trading houses to act as intermediaries for a portion of its oil sales to indirectly supply customers in the United States and elsewhere."

Maduro denounced the U.S. government sanctions and accused the Trump administration of stealing Houston-based Citgo, a subsidiary of PDVSA.

Quoting oil company President Manuel Quevedo, a former National Guard general, Maduro tweeted, "Shame on the U.S government's insolent robbery to the Venezuelan people, they tried to take over CITGO by all means and for all these years."

Maduro also talked to troops on Tuesday and announced his intention to enlarge Venezuela's civilian armed militia to 2 million members by mid-April, according to The Associated Press.

Meanwhile, Bolton reaffirmed a warning to Venezuela: There will be "serious consequences for those who attempt to subvert democracy and harm Guaido," he said.

Venezuela's chief prosecutor, Tarek William Saab, told reporters Tuesday at the Supreme Tribunal of Justice that he had ordered an investigation into Guaidó. He also called for Guaidó's bank accounts to be frozen and his ability to leave Venezuela blocked.

The State Department announced Tuesday that Secretary Mike Pompeo has certified Guaidó's authority to control assets of the Venezuelan government held by the Federal Reserve Bank of New York or any other U.S.-insured banks.

As the diplomatic row continues, most American diplomats have been ordered to leave the U.S. Embassy in Caracas. A State Department spokesperson told NPR, "The safety and security of our personnel is a top priority. On January 24, 2019, the Department ordered the departure of non-emergency personnel from Venezuela."