Accessibility links
In 'We Cast A Shadow,' The Horrors Are Close To Home Maurice Carlos Ruffin's razor-sharp new novel is set in a dystopian near future where race relations have deteriorated further and scientists have developed a procedure to "demelanize" black people. 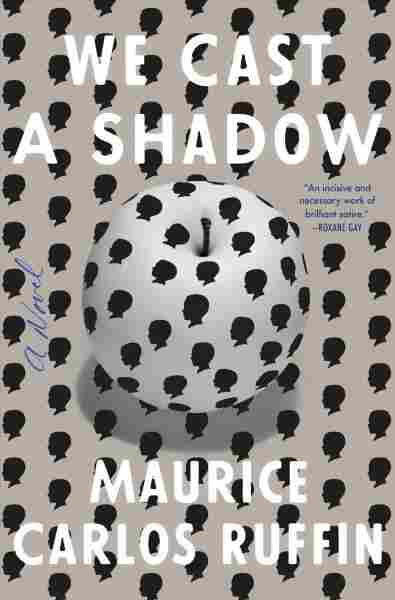 We Cast a Shadow

The unnamed narrator of Maurice Carlos Ruffin's We Cast a Shadow has two great loves. The first is wife, Penny, with whom he enjoys a playful, passionate relationship. The other is their young son, Nigel, a sensitive, intelligent 11-year-old boy with a sweet nature and a childlike sense of curiosity. Nigel, the narrator thinks, is perfect.

Well, almost perfect. Nigel's father can't stand the dark birthmark on his son's face — he's afraid that it will betray the young man's biracial heritage, a thought the narrator, an African American man, can't abide. "A dark-skinned child can expect a life of diminished light," he thinks. "This is truth anywhere in the world and throughout most of history." The birthmark becomes an obsession for the narrator, and his desire to have it removed takes him to some unbelievably dark places.

That's the setup for We Cast a Shadow, the stunning and audacious debut novel from New Orleans author Ruffin. It's at once a pitch-black comedy, a chilling horror story and an endlessly perceptive novel about the possible future of race in America.

The narrator is one of a few black employees of a corporate law firm, and he's ecstatic when he's given a promotion and a shot at a hefty bonus. With the money, he'll be able to afford a "demelanization" surgery for his son, erasing any trace of his African American heritage. The narrator thinks it's Nigel's one chance at a happy life. "It wasn't just that Nigel would make an appetizing target from some zombie with a badge and a gun," he thinks. "It was all the little things that were so obvious to me. The woman switching from one side of the street to the other. The store owner following him around. ... All the things that would eat away at his soul and make him wonder why we ever brought him into this world. All of the things that would make him me."

His wife Penny isn't a fan of the idea, and balks when the narrator is put in charge of his firm's diversity initiative. But the narrator is unswayed, and works hard to land an account that his boss covets. In an effort to prove that his firm is committed to diversity, the narrator joins a milquetoast civil rights group whose leaders include a clueless, dashiki-clad white man who proclaims, "We've got to ignore race to transcend it!"

Complicating the narrator's quest to get money for his son's surgery are a tragic car accident that threatens to derail his life, and a terrorist attack that leads to a police crackdown on civil rights. But the narrator will stop at nothing to get his bonus, and his single-mindedness threatens to destroy his life.

There's a lot going on in We Cast a Shadow, but Ruffin proves to be a master at juggling the numerous characters and storylines. It's a fast-paced and intricately plotted book, but not one that's solely reliant on its many plot twists — the real draw of the novel is Ruffin's gift at creating unforgettable characters, from the narrator's conniving boss, Octavia, to his sketchy drug dealer, Jo Jo.

Perhaps Ruffin's greatest accomplishment is the world he's built in his novel — one that's alarmingly close to the America of today.

Satirical novels can suffer when authors overplay their hands, but this is never a problem for Ruffin. He writes with a straight face, never in love with his own cleverness — there are echoes of Ralph Ellison's intelligent, unshowy prose throughout the book. Ruffin also knows when to deploy his markedly dark sense of humor, which he uses as an effective tool at several points in the novel. ("I liked my java so black, the police planted evidence on it," the narrator proclaims early in the book.)

Perhaps Ruffin's greatest accomplishment is the world he's built in his novel — one that's alarmingly close to the America of today. The jail where the narrator's father is imprisoned is staffed by sadists who give the inmates humiliating nicknames and uniforms (former Maricopa County, Ariz. sheriff Joe Arpaio would be proud), and the children of felons, who are disproportionately African American, need vouchers from law-abiding citizens in order to vote. It's a sad testament to our country's treatment of people of color that such developments don't seem all that implausible.

There's no doubt that We Cast a Shadow, with its sobering look at race in America, can be difficult to read, but it's more than worth it. It's a razor-sharp debut from an urgent new voice in fiction, and a warning about what the future could hold for America and for the world. "The world is a centrifuge that patiently waits to separate my Nigel from his basic human dignity," the narrator observes at one point. "I don't have to tell you that this is an unjust planet."