Accessibility links
'Underground' Digs Deep Into The World Beneath Our Feet Will Hunt approaches the universe of underground caves and bunkers, death and life, with an unusual dedication and open-mindedness — and some striking photography — that is difficult to resist.

'Underground' Digs Deep Into The World Beneath Our Feet

'Underground' Digs Deep Into The World Beneath Our Feet 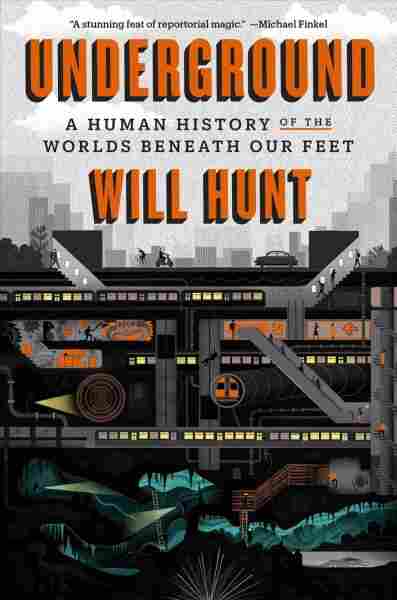 A Human History of the Worlds Beneath Our Feet

Space, the unknown above, is a subject of fascination for millions of people. It has captured the interest of the general public — and is at the center of a great deal of science fiction.

In Underground, Will Hunt demonstrates that there is a world nearly as exciting just below our feet.

Hunt's first book is a blend of memoir, research and reporting. When projects consist of multiple nonfiction elements like this, there is a constant back and forth between which gets priority. Underground is especially dynamic and engaging when Hunt is telling other people's stories or describing his research.

In the liveliest chapter, Hunt shares a handful of stories about what it means to be lost. Alongside his own entrant about misreading a map in a Paris and struggling to retrace his steps, he tells the story of Jean-Luc Jousat-Vergas, who got lost in the tunnels of an abandoned mushroom farm and survived underground for more than month before he was found.

He includes musings on the nature of being lost from writers like Rebecca Solnit and a variety of anecdotes about how animals navigate where humans can't. Hunt, for example, calls blind mole rats the "champion subterranean navigator." To get around without sight "the blind mole rat periodically drums its head against the ground and discerns the shape of the space according to the patterns of returning vibrations." His clear excitement about this information is contagious. With all of this accompaniment, Hunt's own story of being lost does not have to be stretched for space or meaning. The inherent tension of his struggling to find his way out is enhanced by the interceding passages that give it a longer time to unfold.

Hunt's most memorable inquiries come when he probes the different reasons why people head below. For NASA, it's for science: Scientists descend more than a mile into the earth in South Dakota trying to understand subterranean microbes because they think it could be our closest available analog to life on Mars. When scientific inquiry is not the reason, safety often is. Take the ancient underground cities in the Turkish region Cappadocia, which were built as shelters in the event of war, and the Cold-War-era shelters that appeared in American suburbs. But, sometimes, there's no ascribable reason at all. William Lyttle, a Londoner who spent 40 years digging a 30-ft. deep hole 60-ft. in every direction from his house, simply said he "was a man who enjoyed digging," Hunt writes.

Hunt's approach is an open one and he doesn't try to fit all of the disparate narratives into the same box. This survey-quality is one of the book's biggest strengths. This is especially true when he loops in his research on the relationships that indigenous peoples in North America, South America, and Australia have with their lands. Hunt visits Wind Cave in South Dakota and quotes Sina Bear Eagle, an Oglala Lakota woman on its place at the center of the Lakota creation story: "'The first humans,' she said, 'lived underground, in the spirit world. The creator had told them to wait in the dark until the surface world was ready for them.'"

When he visits the oldest mine in the world, on Aborignal land on the western coast of Australia, he makes an effort to explain to his readers why the Wajarri family he's meeting with are right to be skeptical of him — and he writes about the experience of earning their trust and visiting the mine with gratitude.

The issues with Underground come when Hunt leans too heavily on his own experiences. This mostly occurs in the book's first two chapters. The opening chapter, mostly about how Hunt established his relationship to exploring what was below him, doesn't have a lot of traction. The right ideas are in there — Hunt notes that "Geologists believe that more than half of the world's caves are undiscovered, buried deep in impenetrable crust" — but he doesn't give them enough time. Instead, his own exploring near his childhood home in Providence, Rhode Island, takes precedence, though it feels rote. In the next chapter, when Hunt describes a trip across Paris that takes place entirely underground, the information about Nadar, the first person to photograph Paris's underground and other anecdotes, including one on how 18th-century Paris was "overflowing with corpses" are too minor a player. The traverse has dangers, but the beats of it feel predictable.

Underground is a thoughtful, inquisitive book. Hunt approaches the subject with an unusual dedication and open-mindedness that is difficult to resist once Underground get its sea legs. These traits, alongside the striking photography that appears throughout the book, makes Hunt's debut an admirable and successful one.

Bradley Babendir is a freelance book critic based in Boston.