Accessibility links
'Here And Now And Then' Is A Perilous Mix Of Parenthood And Time Travel In Mike Chen's debut novel, a time-traveling secret agent is stranded in the past and has to live out a normal life — including a family — that becomes a problem when he returns to his own time. 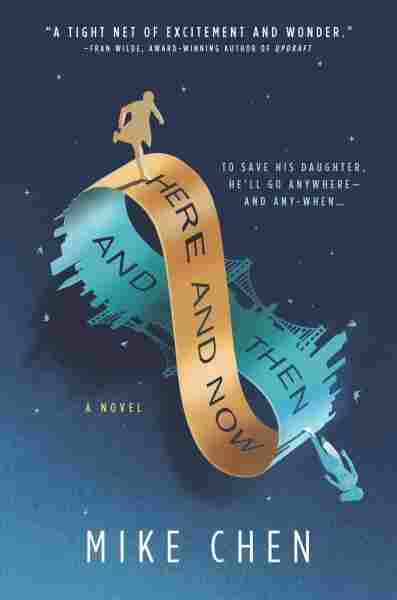 Here and Now and Then

Title
Here and Now and Then
Author
Mike Chen

It's always interesting, as readers, to see what we remember about books years after we've read them. I recall reading The Time Traveler's Wife by Audrey Niffenegger several years after it came out, and loving it — for the romance, yes, and its variously tragic and joyful twists and turns, but mostly because I was so impressed with the complexity of the time travel narrative, the way its pieces fit together. In other words, what's remained with me are the book's mechanics. Mike Chen's debut novel, Here and Now and Then, is also about time travel and includes a romance or two, but these elements feel almost secondary, despite being necessary for the plot. At its core, Chen's book is really about the prides and perils of parenthood, and I'm certain that's what I'll always remember about it.

Kin Stewart has PTSD, or at least that's what he tells everyone — and though he believes he's only telling them a cover story, he probably isn't. After all, he's a secret agent, wounded during a mission and stranded with no way to get home. It takes 18 years for his agency to retrieve him — except for them it's only been a couple weeks. Oops. See, the agency Kin works for is the Temporal Corruption Bureau (TCB), first formed by the United Nations in 2098. He was in our era — the late '90s, specifically — to chase down a temporal criminal, a fellow time traveler who was trying to alter the course of history for future financial gain. Things got violent, and the subcutaneous beacon that was supposed to signal Kin's location so that a retriever agent could come and collect him got broken by a bullet. No beacon, no way home.

Can We Change The Past?

So he makes the best of it. He goes to college, finds a job, gets married to Heather, and the two of them have a daughter, Miranda. Throughout, the memories of his past (our future) disappear, for the most part. He remembers what's been ingrained in him by his training as an agent, but the personal details of the life he once lived? Those are gone completely. Until, that is, he's taken back to his own era pretty much by force. His colleagues and bosses don't seem to understand the gravity of his situation in the same way he does — the TCB's greatest concern is Kin getting involved in the affairs of the past. Becoming involved in Heather's life meant he knocked her off whatever path she should've been on if a person from the future hadn't bumped into her. Even worse, Miranda's existence itself is a timeline corruption. "You signed up for this when you became on agent," Markus, Kin's grumpy rule-abiding colleague tells him. "You knew the rules then, you knew them when you got stuck here and you broke them. You may have changed, but the rules haven't. You break them again and the TCB has to course-correct the corruption."

At its core, Chen's book is really about the prides and perils of parenthood, and I'm certain that's what I'll always remember about it.

Stuck again, this time in his original life, having abandoned his wife and child with barely a goodbye, Kin is emotionally off-balance. His old/new life, his old/new fiancée, his job — everything is the same as it was, but isn't, because he's matured by 18 years, has been through a long, loving marriage and raised a teenage daughter with his wife. How could anyone deal with that without losing their minds?

The plot twists and turns from here in speedy, page-flipping style, defying me each time I thought I knew what was coming. But even more than these delightfully surprising turns, the novel's strength lies in Kin's actions as he tries to save Miranda, both from a miserable life in which she believes her father abandoned her entirely — and from his own bosses.

What holds steady throughout the novel is Kin's bafflement as he learns, over and over again, just how incredible Miranda is, how much of her own person she is. He loves her, of course, but he respects and admires her as well. Over a very short span of time, he sees her grow from teenager to adult with a rapidity that seems to match what so many non-time-traveling parents mean when they tell one another, they grow up so fast, don't they? Ultimately, Mike Chen's time travel narrative feels like an extended metaphor, and it's no surprise to see that Here and Now and Then is dedicated to his own daughter, Amelia.