Accessibility links
U.S. Court Orders Syria To Pay $300 Million For Killing Of Journalist Marie Colvin The judge ruled that Colvin was killed by Syria and "targeted because of her profession, for the purpose of silencing those reporting on the growing opposition movement in the country." 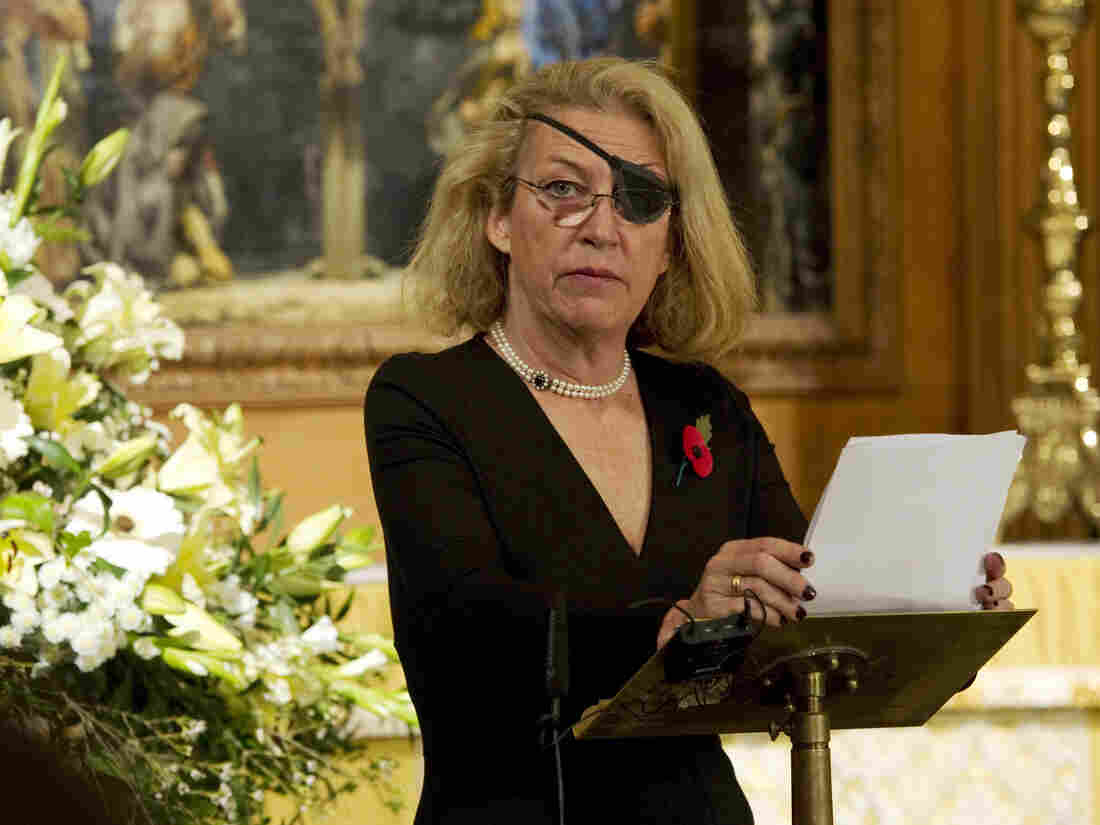 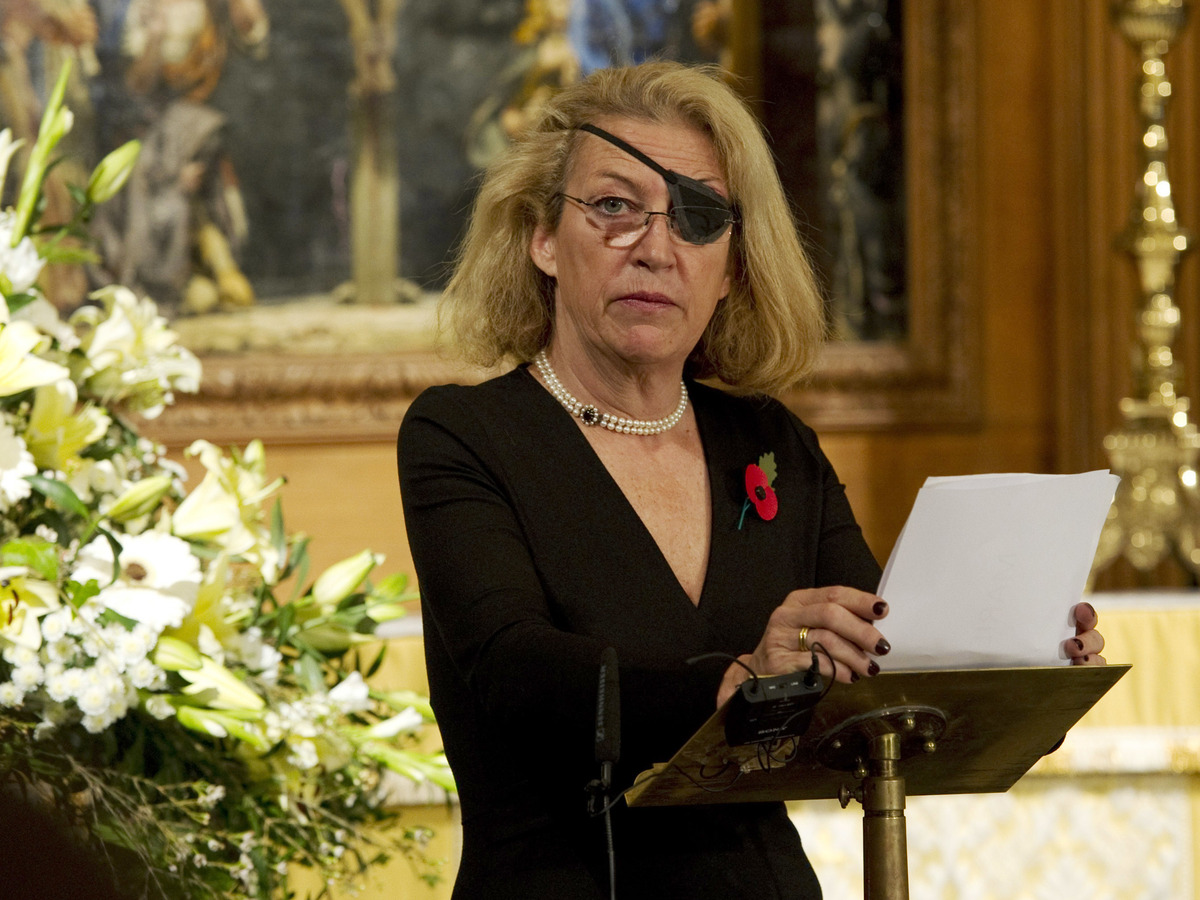 A U.S. court has ordered the Syrian government to pay $300 million for killing American journalist Marie Colvin in 2012. Colvin is seen here in London in 2010.

A U.S. court has found the Syrian government liable in the 2012 death of American journalist Marie Colvin, ordering it to pay $300 million in punitive damages.

Colvin was reporting from in the western Syrian city of Homs when the makeshift media center where she was working came under artillery attack. French photographer Rémi Ochlik, 28, also was killed and other journalists and activists were wounded.

Colvin's sister Cathleen and Cathleen's three children filed the lawsuit in 2016. They asserted their claims under a provision of the Foreign Sovereign Immunities Act, a federal law that permits victims to sue U.S.-designated state sponsors of terrorism.

The Syrian government ignored the lawsuit. By failing to appear, it defaulted in the case.

Syria also was ordered to pay $2.5 million in compensation to Cathleen Colvin and $11,836 in funeral expenses. The amount of compensatory damages remains to be determined.

Judge Amy Berman Jackson of the U.S. District Court for the District of Columbia ruled that the attack was "an extrajudicial killing" and that Marie Colvin "was specifically targeted because of her profession, for the purpose of silencing those reporting on the growing opposition movement in the country."

"By perpetrating a directed attack against the Media Center, Syria intended to intimidate journalists, inhibit newsgathering and the dissemination of information, and suppress dissent," Jackson wrote. "A targeted murder of an American citizen, whose courageous work was not only important, but vital to our understanding of warzones and of wars generally, is outrageous, and therefore a punitive damages award that multiples the impact on the responsible state is warranted."

As NPR's Deborah Amos reported in April, key testimony in the case came from a Syrian defector who had been a high-ranking intelligence officer, who recounted the how the attack was planned and executed.

Maher Assad, a Syrian army commander and the brother of President Bashar Assad, gave Shahadah a new car as a reward for the attack's success. Shahadah was promoted and became the head of the Syria's military intelligence.

It's highly unlikely that Syria will pay the judgment. In a 2016 interview with NBC News, Bashar Assad shrugged off Colvin's death: "It's a war and she came illegally to Syria. She worked with the terrorists, and because she came illegally, she's been responsible of everything that befall on her."

A New Biography Of Marie Colvin, Eyewitness To War

Colvin was an intrepid and tireless war correspondent, NPR's Lourdes Garcia-Navarro wrote in a remembrance:

"While Marie — an American from Oyster Bay, N.Y. — was largely unknown in her home country, she was a legend in the United Kingdom. Her reports for the British Sunday Times from war zones across the world illuminated the tragedies and perils that ordinary people caught in extraordinary events face. ... [S]he was often the first person in somewhere, and frequently the last one to leave."

In 2016, Amos described the work Colvin was doing when she was assassinated:

"Smuggled into Syria with photographer Paul Conroy in February 2012, Colvin broadcast live TV reports at the media center for the BBC, CNN, and the British broadcaster Channel 4. Her powerful accounts of besieged civilians, starving women and wounded children undermined government attempts to control the coverage of clashes. Thousands of civilians were trapped in the neighborhood of Baba Amr along with rebel fighters.

"Syrian media activists uploaded daily videos of civilian suffering, which the government could dismiss. But a high-profile Western war correspondent raised the profile of the conflict and undermined government claims that Syrian civilians were dying at the hands of an armed insurgency.

"In Colvin's final broadcast for CNN, she challenged the Syrian government's claims that the army was only shelling insurgents. 'It's a complete and utter lie they're only going after terrorists,' Colvin told Anderson Cooper. 'The Syrian Army is simply shelling a city of cold, starving civilians.' "

A movie and a book about Colvin were both released last year.

Scott Gilmore, lead counsel for plaintiffs, said the case "is a legal rejoinder to the war on truth waged by strongman leaders like Bashar al-Assad. At a time when journalists face unprecedented threats, the court sent a very clear message: evidence speaks louder than disinformation, and censorship through
violence is a serious breach of international law."