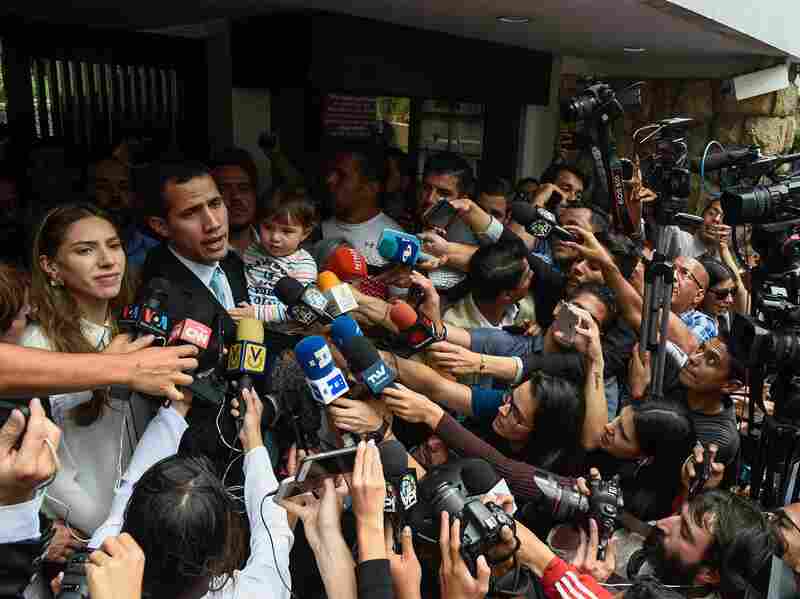 Opposition leader Juan Guaidó talks to the press as he holds his daughter, Miranda, next to his wife, Fabiana Rosales, outside his home in Caracas on Thursday. Federico Parra/AFP/Getty Images hide caption 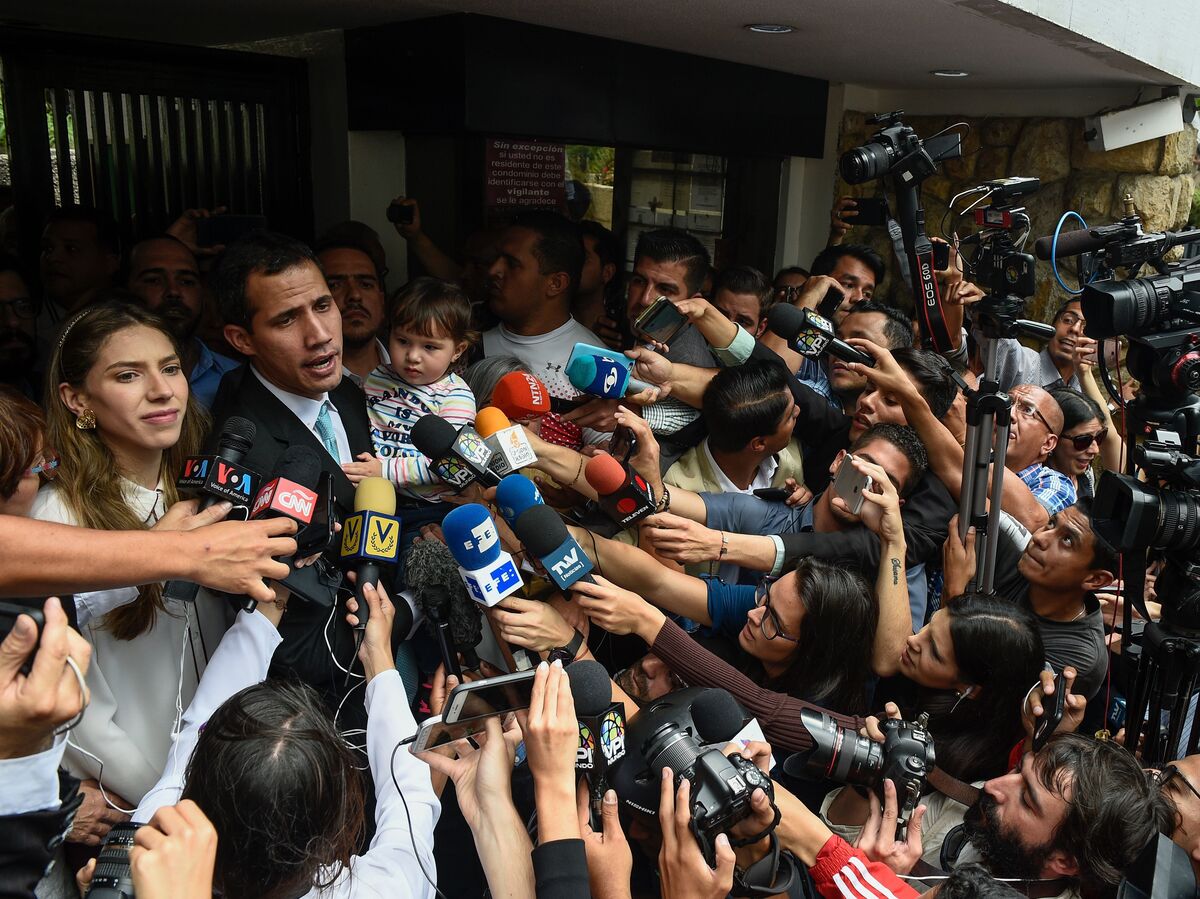 Opposition leader Juan Guaidó talks to the press as he holds his daughter, Miranda, next to his wife, Fabiana Rosales, outside his home in Caracas on Thursday.

Opposition leader Juan Guaidó accused police of raiding his home Thursday, a claim that could mark an intensifying power struggle between him and Venezuelan President Nicolás Maduro.

Guaidó said agents from a special forces police unit with a reputation for atrocities visited his home, NPR has reported. Guaidó claimed the police asked for his wife, Fabiana Rosales, who was home with their daughter Miranda. The Associated Press reported neighbors rushed to the apartment building while banging on pots and pans. The police reportedly left soon after they arrived.

"I hold the citizen Nicolás Maduro responsible for the safety of my daughter who is at home," Guaidó wrote.

Guaidó relayed the story to supporters who gathered to hear him outline an economic plan for Venezuela's recovery at a university in Caracas. Then the opposition leader went home and appeared outside, holding his daughter, with his wife by his side.

Venezuela has been thrown into turmoil after Guaidó declared himself interim president Jan. 23. The 35-year-old president of the National Assembly says Venezuela's constitution grants him power to take control of the government because Maduro was re-elected last year by fraud. Guaidó has called for Maduro to leave office and call new elections.

The U.S., many Latin American countries, Australia, Canada and Israel have recognized Guaidó as interim president.

The European Parliament voted 439-104 Thursday to recognize Guaidó as interim president. It is a nonbinding vote; however, Britain, France, Germany and Spain have said they will recognize Guaidó unless Venezuela holds new elections.

Earlier this week, the U.S. imposed sanctions on Venezuelan oil to pressure Maduro to leave.

Maduro has not backed down. He has support from Russia, China, Iran and Bolivia and has accused the U.S. of orchestrating a plot to eject him and steal Venezuela's oil.

Sonia Schott, a consultant on U.S.-Latin American business, told NPR previous protests against Maduro's rule foundered because of fighting within the opposition. This time may be different, she said.

"Right now everyone is backing Juan Guaidó," she said. "He seems to not want to exercise power. He is really aware that he is a transition figure in Venezuela's history."

With his oil revenue partially frozen, Maduro may have turned to some unconventional methods of generating cash. A Russian-chartered planeload of gold is rumored to have flown out of Caracas, NPR has reported.

Sen. Marco Rubio, R-Fla., threatened U.S. sanctions against any air charter service that would help spirit gold out of the country.

.@UAEEmbassyUS, we have reports that a French national working for @noor_capital is in Caracas today to arrange for the theft of more Gold from #Venezuela. I hope you have advised them that they & any air charter service that does this will be subject to Treasury sanctions.

Guaidó and Maduro continue to vie for control of key segments of Venezuela's society.

Maduro's forces have clamped down on protesters, particularly in poorer Caracas neighborhoods that once enthusiastically supported his predecessor Hugo Chávez , NPR has reported.

The president has bolstered his ties to the military. He has aired footage of military marches, and rallied troops by invoking Chávez and the liberator Simón Bolívar.

In an effort to weaken that bond, Guaidó has taped video messages to the armed forces. In one, he called on officers to turn their backs on Maduro and keep their guns silent while the transitional government takes power, NPR has reported.

Guaidó claims to have met with the military to try to bring them to his side. He writes in a column in The New York Times:

"We have had clandestine meetings with members of the armed forces and the security forces. We have offered amnesty to all those who are found not guilty of crimes against humanity. The military's withdrawal of support from Mr. Maduro is crucial to enabling a change in government, and the majority of those in service agree that the country's recent travails are untenable."

There are so far few signs the military's support for Maduro is cracking.

White House officials continue to push for him to go. On Thursday National Security Adviser John Bolton tweeted a wish for Maduro and his top aides to have "a long, quiet retirement, living on a nice beach somewhere far from Venezuela. They should take advantage of President Guaidó's amnesty and move on."

I wish Nicolas Maduro and his top advisors a long, quiet retirement, living on a nice beach somewhere far from Venezuela. They should take advantage of President Guaido’s amnesty and move on. The sooner the better.

"One of the things that keeps the military together is ideology, an anti-imperialist revolution that they are defending," Smilde said. "And so I think that the United States pressuring in that direction is probably not the most productive."