Accessibility links
Here's How PG&E's Bankruptcy Might Hurt California's Ambitious Climate Goals PG&E is key to helping California meet its ambitious goal of zero carbon electricity by mid-century. Now there's concern that the utility's bankruptcy may set that back. 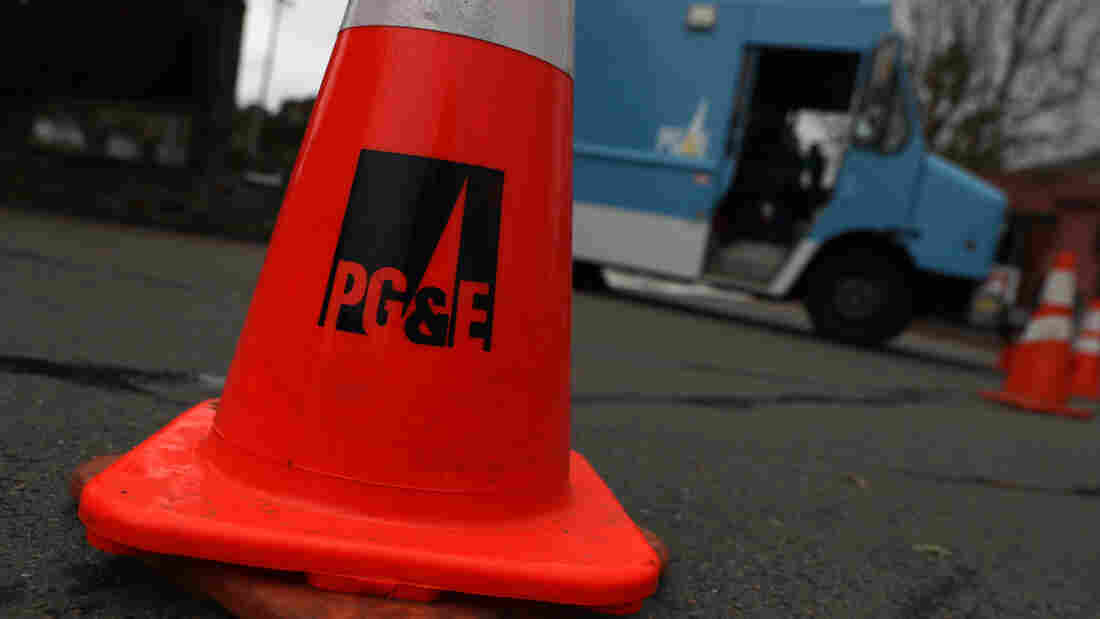 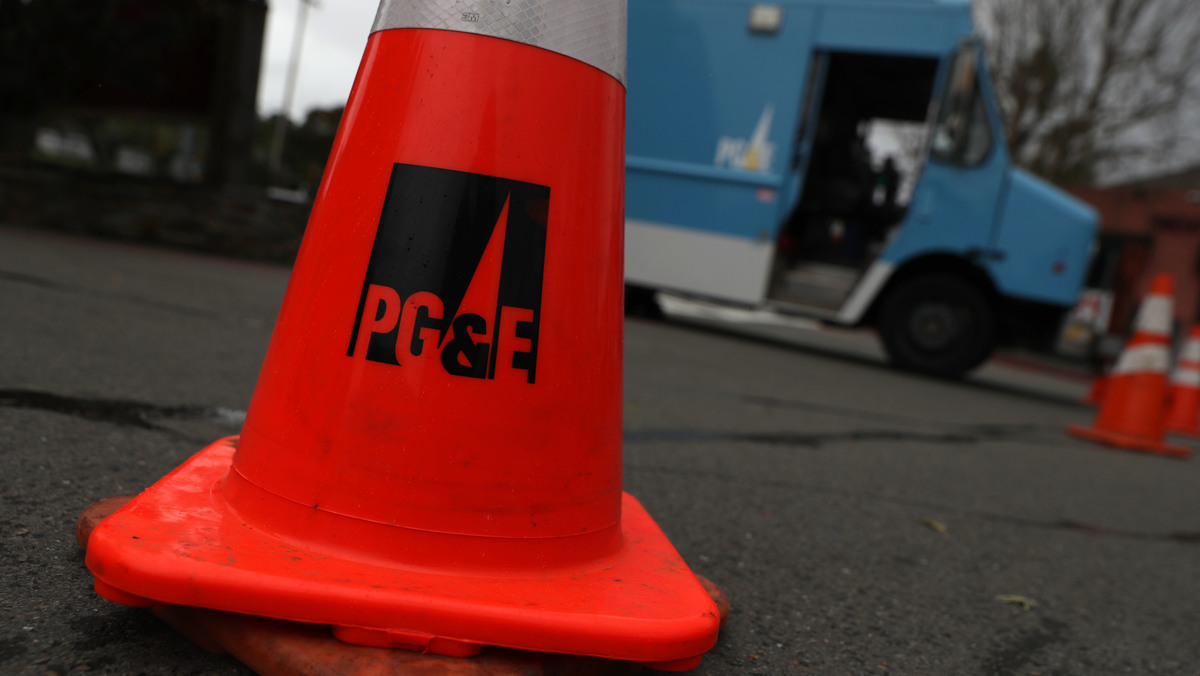 A traffic cone sits next to a Pacific Gas & Electric truck earlier this month in Fairfax, Calif.

Bankruptcy lawyers this week began hashing out the future of PG&E, one of the country's largest utilities, and with that comes a battle over billions of dollars in renewable energy power.

PG&E filed for chapter 11 protection because of potentially billions in liability over recent wildfires. That has solar and wind companies concerned that the utility will be paying them less, or even nothing in the future. They've launched a preemptive strike, asking federal regulators to step in to protect their deals with the utility.

PG&E is one of the nation's largest buyers of renewable energy, driven by California's ambitious climate change goals.

In 2002, the state passed a law requiring utilities to get 20 percent of their electricity from sources like solar and wind. Last year, the state put utilities on the hook for 100 percent clean energy by 2045.

"We've made them our essential clean energy partners," says Ralph Cavanagh, an attorney with the Natural Resources Defense Council. "A federal bankruptcy judge has the ability to disrupt that in many ways."

In bankruptcy proceedings, the judge takes stock of all the debts a company has and then determines how its limited funds are paid out. One possibility is either reducing or rejecting some of the almost 300 renewable energy contracts on PG&E's books.

"Suddenly those are at risk," says Cavanagh. "That's causing consternation across the renewable energy sector, understandably."

Some of PG&E's solar contracts date back more than a decade, when the technology was relatively expensive.

"The contracts that PG&E signed were some of the richest and highest price contracts we've seen for clean energy to date in the U.S.," says Ethan Zindler, an analyst with Bloomberg New Energy Finance. "The price of renewables has dropped really dramatically since when they signed these contracts."

It could undermine confidence in California as a clean energy market going forward.

In its bankruptcy filing, PG&E claims some of the credit for helping renewable energy come of age, saying its contracts "contributed to significant price reductions for renewable energy resources currently available on the market."

But PG&E is still paying out those contracts, which can last 15 to 20 years. The bankruptcy judge could potentially seek to change their terms or prices.

"It could undermine confidence in California as a clean energy market going forward," says Zindler.

Already, several renewable energy projects have seen their credit ratings downgraded because of their contracts with PG&E, including NextEra Energy's Genesis Solar Project, located in the Mojave Desert.

"Even if all of that cash is strapped, we expect to be able to meet our financial expectations," said NextEra CFO John Ketchum.

But the company went on the offense, too. It asked federal regulators at the Federal Energy Regulatory Commission to get involved.

"Obviously, we are not going to sit on our heels," said Ketchum. "We're going to pursue all avenues."

FERC oversees power contracts across state lines, and a week ago it asserted it has a role to play, writing that "this Commission and the bankruptcy courts have concurrent jurisdiction to review and address the disposition of wholesale power contracts sought to be rejected through bankruptcy."

PG&E responded by asking the bankruptcy court to declare its exclusive jurisdiction, to prevent "irreparable harm" to PG&E.

In other utility cases, "this has been a tussle that's been playing out in bankruptcy courts all over the nation," she says. Some bankruptcy courts have decided to leave power contracts alone, while others have amended them.

Sandoval expects to see California make its own case for protecting its renewable energy goals. Achieving them would be unlikely without the full participation of the state's biggest utility.

"They might argue: 'Wait, judge, we have adopted in California a number of laws regarding environmental protection, and the bankruptcy law gives you no authority to displace that,'" she says.

If PG&E's last bankruptcy is any guide, a judge may decide to preserve the environmental programs. In 2001, the utility's energy efficiency spending was left untouched.

"That's not automatic," cautions Cavanagh. "With a limited amount of money available to pay claims, nothing is certain, and that's one of the reasons you want to stay out of bankruptcy proceedings. Everyone loses."