Accessibility links
Government Reopens, But More Trouble Lies Ahead For Federal Workers "The federal government already has a recruitment problem, right?" said one expert. If "you watch this play out for the last 35 days, are you saying to yourself, 'Sign me up for that?' Probably not." 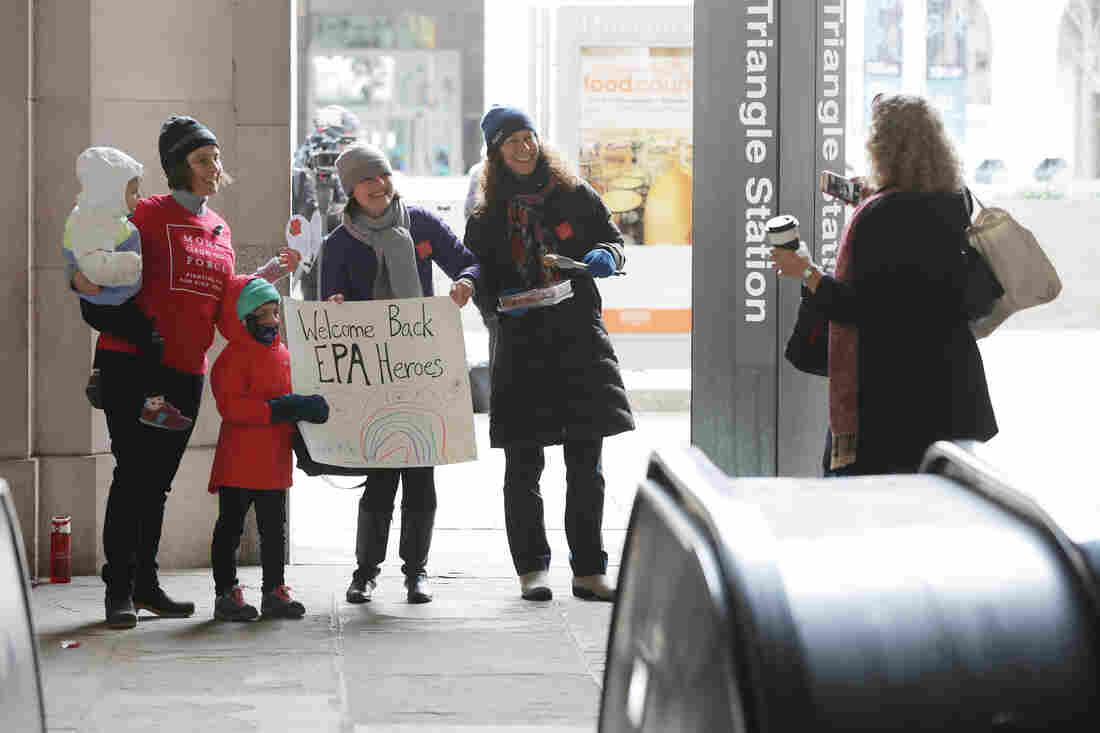 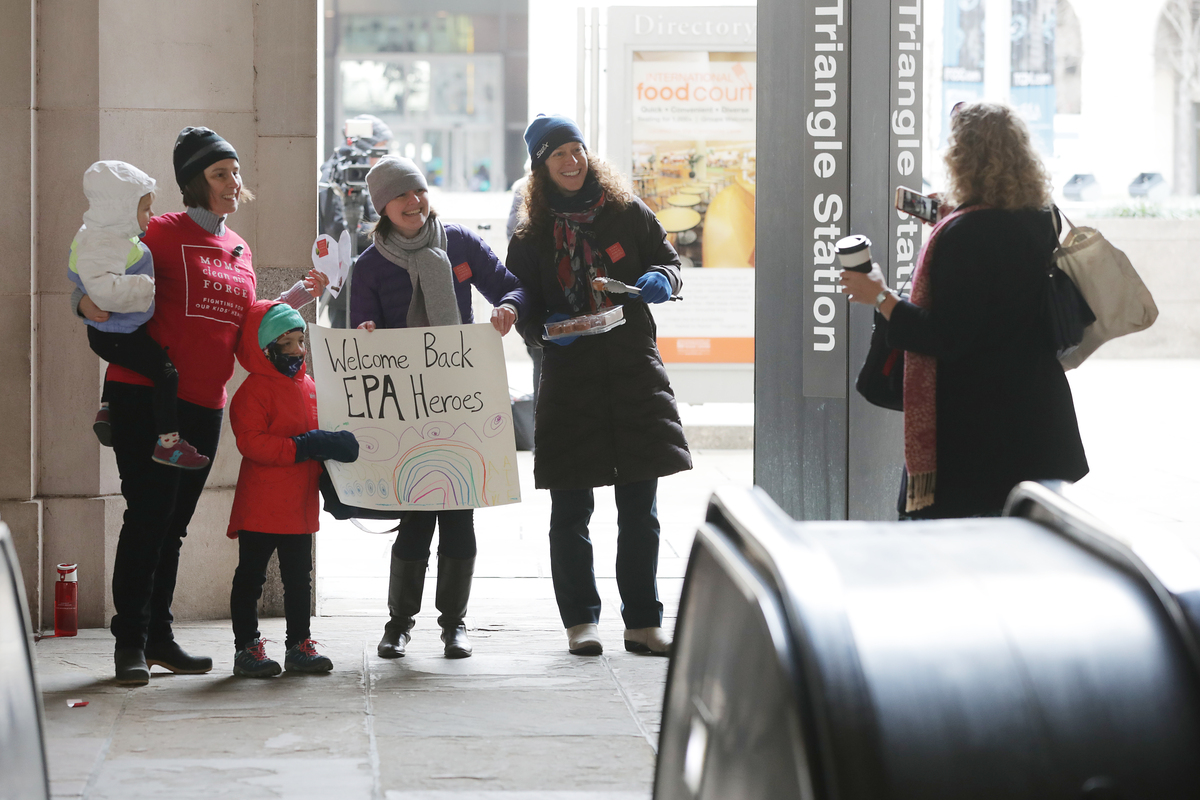 Environmental activists Liz Brandt (from left), with her daughters, Natalia, 3, and Valencia Bednar, 5; Martha Roberts, and Molly Rauch pose for a photograph while welcoming Environmental Protection Agency employees back to work on Jan. 28 in Washington, D.C. Furloughed employees returned to work following the end of the longest-ever partial federal government shutdown.

Hundreds of thousands of federal workers received their first partial paychecks this week as the government reopened Monday after a 35-day partial shutdown.

While the financial costs for those workers were high, the shutdown also took a heavy toll on employee morale. And it may have the longer-term impact of making it more difficult to bring new people into the government.

"I think this is just going to further kill morale," says Jared Hautamaki, an attorney at the Environmental Protection Agency. "It's going to hurt recruiting."

Hautamaki, who has worked for the EPA for 10 years, says he has had enough.

"Federal employees are demonized by Congress and industry and the public. It's just not a good place to be," he says.

In its annual study of the "Best Places to Work in the Federal Government," the Partnership for Public Service found that federal workforce morale was already on the decline for a number of reasons. The Trump administration instituted a temporary hiring freeze and then a pay freeze.

Now, after the second partial government shutdown in a year, Partnership CEO Max Stier says working for a federal agency feels even less rewarding, especially for those workers with a sense of mission.

"I think that is what's most troubling for the federal workforce," Stier says. "Yes, it had real financial implications, but even more than that, it disrupted the core value proposition of the job, which is to be able to make a difference, to work for a purpose."

Michelle Cloutier, a federal worker in Washington, D.C., described getting over a "furlough hangover" when the government finally reopened. Cloutier, a military veteran, does not plan to leave the government, saying her current job "is another way to serve my country," but she added, "I don't like the uncertainty."

In a tight job market, federal employees, many of whom are highly educated, would most likely not have a hard time finding other jobs. Jessica Klement, vice president of the National Active and Retired Federal Employees Association, says the effects of the shutdown on federal workers are likely to be long-lasting.

"Federal employees," she says, "take great pride in the work that they do for the federal government. And every day for 35 days they turned on the television and were told, 'You have nothing to worry about — you're going to get back pay' or 'Are you even essential if you're not working during this government shutdown?' " That message, Klement says, will create "untold morale problems" that will play out over the next few "days, weeks and years."

A recent survey that looked at satisfaction with the federal government's performance by the American Customer Satisfaction Index already showed a slight decline, even before the latest shutdown.

One area where the impact will be felt into the future is in recruitment. The federal workforce is already aging. Stier says that among federal information technology workers, there are "five times as many people over the age of 60 as under the age of 30."

The federal workforce needs refreshing, says Stier, "and this is a very bad time to be chasing away new talent that might want to come into government."

Klement agrees. "The federal government already has a recruitment problem, right? If you are 22, 23, graduating from college this coming spring," she says, "and you watch this play out for the last 35 days, are you saying to yourself, 'Sign me up for that?' Probably not."

Cloutier says morale at the agency where she works would be better if there weren't the threat of another shutdown later in February.