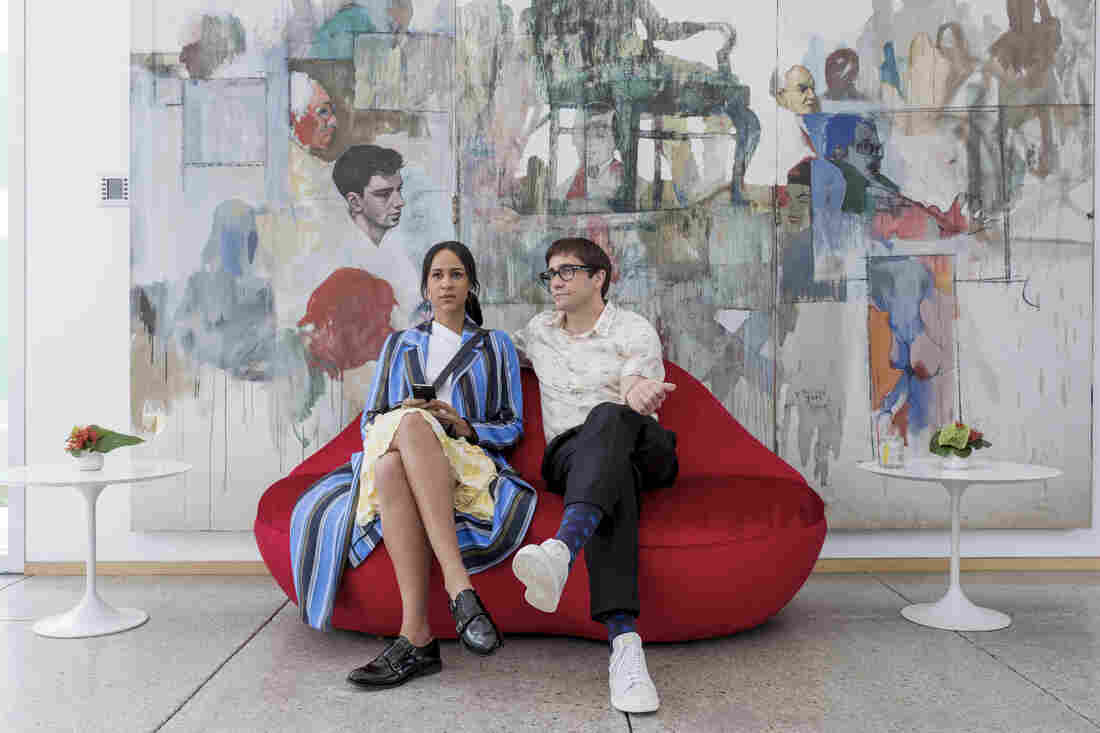 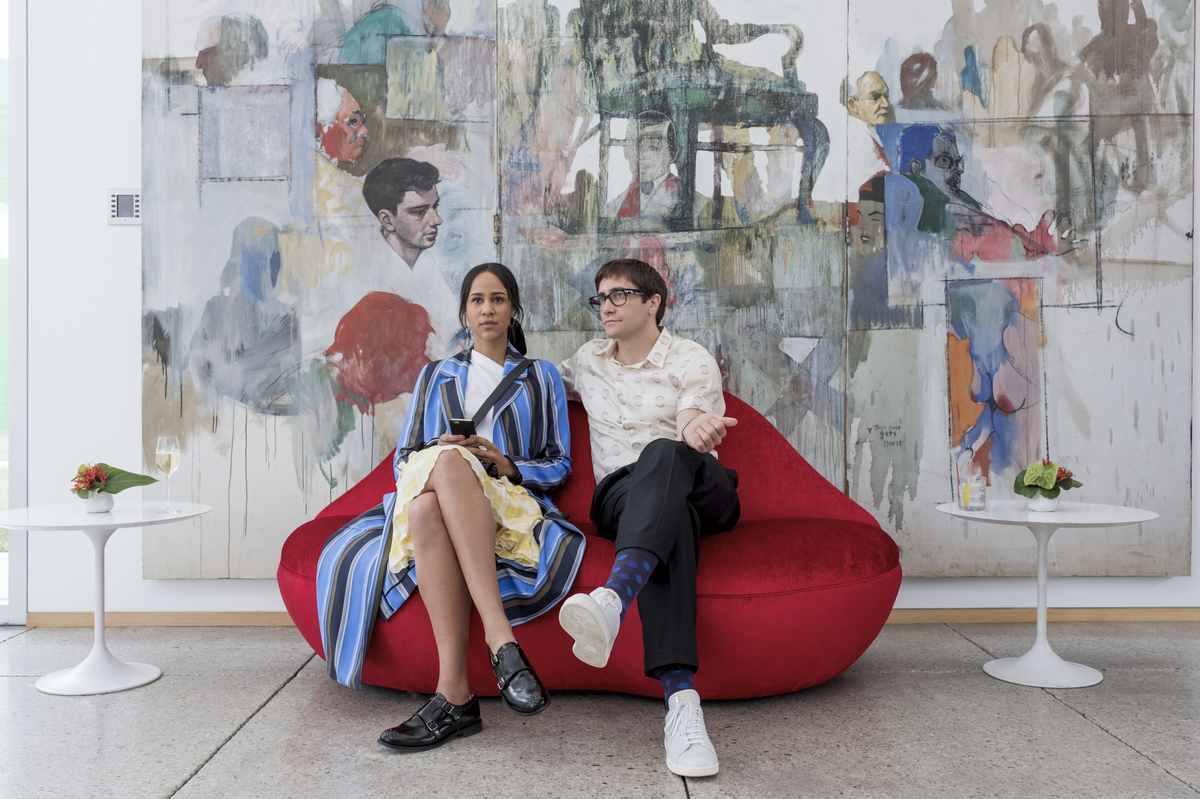 'Nightcrawler' Jake Gyllenhaal: We're All Complicit In 'If It Bleeds, It Leads'

Director Dan Gilroy is back with a new film called Velvet Buzzsaw.

Like his last movie, Nightcrawler, Gilroy is the writer and director. And also like his last film, this one stars Jake Gyllenhaal and Rene Russo. Gyllenhaal plays an art critic named Morf Vandewalt, Russo a gallery owner named Rhodora Haze. And the movie hinges around the work of the late artist Vetril Dease.

As the names may give away, Velvet Buzzsaw is a comedy. It's also a horror movie, where the killer is — wait for it — the works of art.

"We're campy, we're kitschy, we're satire," Gilroy says in an interview. "The film is, I believe, is meant to be fun. You know, I think there's some very serious themes and ideas in this. But at the same time, I think that humor can be a very powerful avenue to transmit an idea. So I love that we're in that realm."

On why the movie is about contemporary art

Well, the original germ of the idea came from just being at a contemporary art museum near closing, and there was a lot of contemporary art that had sort of a dark tone to it. And I thought: This would be an interesting world to set a thriller. So that was the original genesis of it. I like to do films now that have some sort of thematic relevance to me. And contemporary art was a movement that really began to challenge and to provoke, and it's been co-opted by big business and money. And I saw it as a world off its axis. It seems like a world that's sort of teetering, and the people within the world know it. And there's an interesting dramatic tension in that that I thought worked really well with the thriller element of it. ...

I was interested in exploring the relationship between art and commerce. And I think it's a very uneasy relationship in general. The quality of a work shouldn't be judged by the first weekend of box office or the number of people who've seen it online or the amount paid at Sotheby's. Success doesn't diminish your work, but it doesn't define it either. And I think that's something that I wanted to explore. ...

I went through a personal experience: I worked on the epic debacle Superman Lives. And I worked on it for a year and a half, and they finally pulled the plug on it two weeks before shooting. And I went down to Santa Monica, and I was sitting at the beach. For a year and a half, I've worked on this script. And I was watching the waves, and I thought: I could have written the words on the beach and have the water wash them away. And it was a real sobering thought. And shortly thereafter, I said to myself: It doesn't matter. As a creator, it was a valuable experience. I got something out of it. I've grown as a writer. When I got up from the beach, I sort of decided that I was going to do things for myself as much as other people.

And I think it's important to always know that art of any sort is more than a commodity. Yes, hopefully, everybody's art can generate enough money to pay their rent, and take care of their needs, and if it gets bigger than that, more power to you. But if it doesn't, never lose sight of the fact that you're investing something into it that has meaning. Really, if there's any sort of central theme to the film, it's that art is more than a commodity. Artists invest a part of their soul in their work, and it has value on that level.

On choosing Netflix for distribution rather than other interested studios

When I was trying to decide whether to go with [Netflix] or not, I went online. And ... there was a story about somebody who said, "Oh, Netflix is going to destroy the theatrical experience." And there were 50 comments that followed, and they were all like, "Oh, you must live in Los Angeles or New York, because I don't get to see all these movies that you're getting to see." And I suddenly realized: Netflix has democratized the filmgoing experience. And as a storyteller, I just want people to see the film. Yes, I would love everybody to see the film in an IMAX theater with pristine sound. That's just not going to happen. So the idea of two or four or one person sitting and watching this film in the comfort of their home — that's fine with me.

On the names of the characters

First of all, I like unusual names 'cause I'm an enormous Charles Dickens fan, and I love the character names that he would come up with for his characters. And so: Morf Vandewalt sort of came after a lot of thought. Rhodora — the rhodora is a flower ... and I think it was Emerson who wrote a poem about the rhodora. Vetril Dease ... I did a movie that never got made, set in the South in the 1800s, and I got a list of census rolls, and one of the names on the census from, like, 1842 was Vetril Dease. And I used that from that.

On making the works of art that appear in the film

About six months before we started shooting, my art advisor who came on [for] the movie, David Hundley, and I started to create – it's over 100 pieces of original art. They fell into two categories: There is this central deceased artist named Vetril Dease — we needed to create a body of work for him — and then we needed to create all the art that surrounds, you know, Art Basel and the galleries. And we hired artists to create original pieces of art. It was quite an undertaking. That was a big part of the film. Jim Bissell, our production designer, was deeply involved in this as well.

It's all right now sitting in a storage facility that I'm not sure what I should do with. Some of it's creepy, some of it's not my taste. There's a 2-ton, 6-foot, solid chrome sphere that's just sitting there that I don't know what to do with. I'm very uncertain what to do with it all, to be honest.

On any reaction he's heard from the art world

I've had no reaction from the fine art community whatsoever. I'm very curious to see what they think of it. When I made Nightcrawler, I actually thought that local television news would be offended by what we had done. And I would run into people all the time afterwards saying, "Oh, no it's so accurate" and "We don't do that. Other people do that. So I'm not really offended." So I'm hoping that the contemporary art world looks at it that way. I should say, last week I finally caught up with a really wonderful documentary called The Price of Everything on HBO, which is about the contemporary art world. And here are the titans of the industry speaking about the very issues that our film is about. So I'm hoping that they see it as something that's relevant and real.

Nathan Heffel edited this interview for broadcast. Patrick Jarenwattananon adapted it for the Web.