Accessibility links
For Many Fire Evacuees, There's Still No Going Back To Paradise Paradise, Calif., is a skeleton these days after mostly burning to the ground last November. Months later, there's growing acceptance very few people will be able to move back anytime soon. 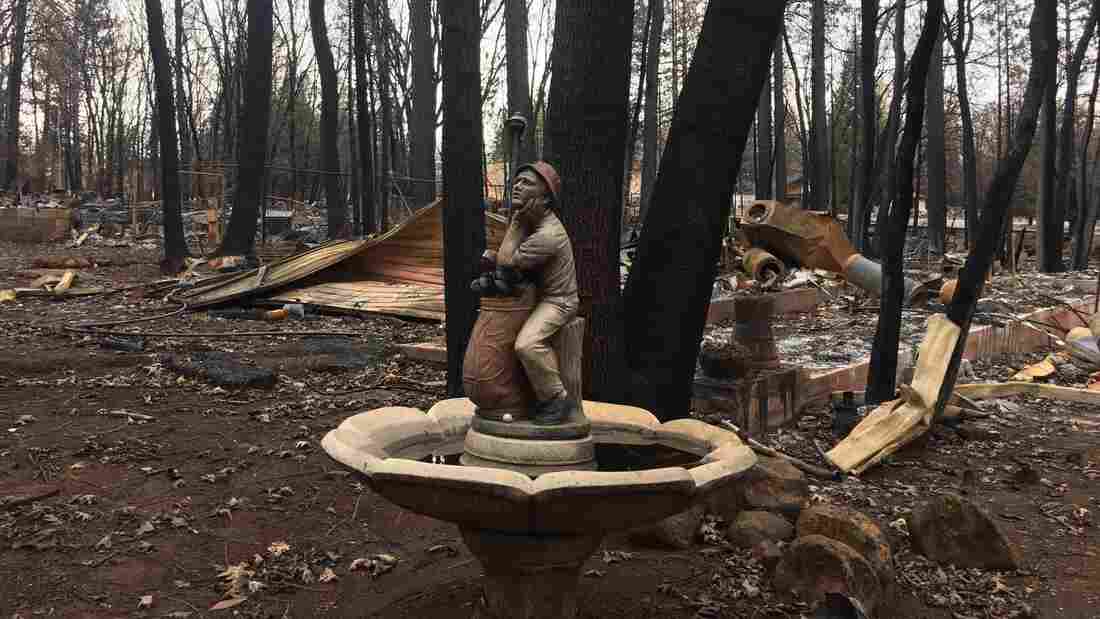 There are still burned out cars, school buses, and toxic debris all over Paradise, Calif. Neighborhoods remain unrecognizable to even longtime residents. Alisa Barba/NPR hide caption 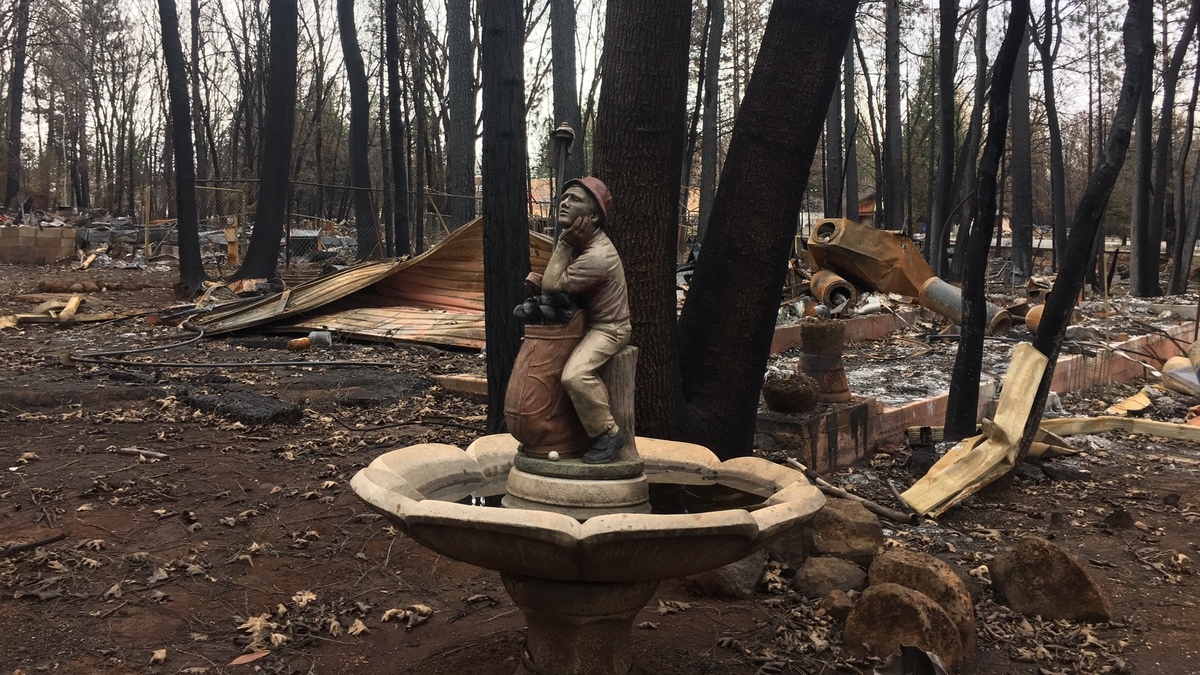 There are still burned out cars, school buses, and toxic debris all over Paradise, Calif. Neighborhoods remain unrecognizable to even longtime residents.

Paradise, Calif., the northern California town nestled in a pine cloaked ridge in the Sierra Foothills, had a population of about 25,000 until it was almost entirely wiped out by the Camp Fire nearly three months ago. It was the deadliest, most destructive wildfire in the U.S. in more than a century. Now, despite a massive effort to clean up, restore power and make plans to rebuild, the town remains largely uninhabitable.

There are still burned out cars, pickups and school buses lining its roads. Neighborhoods remain unrecognizable to even longtime residents. There's ash and toxic debris everywhere.

"We've been staring at these same businesses and these same homes, burned down in our neighborhoods for over two months," says Duane Crowder, a volunteer who's coordinating disaster relief. "Nothing has been done with them." 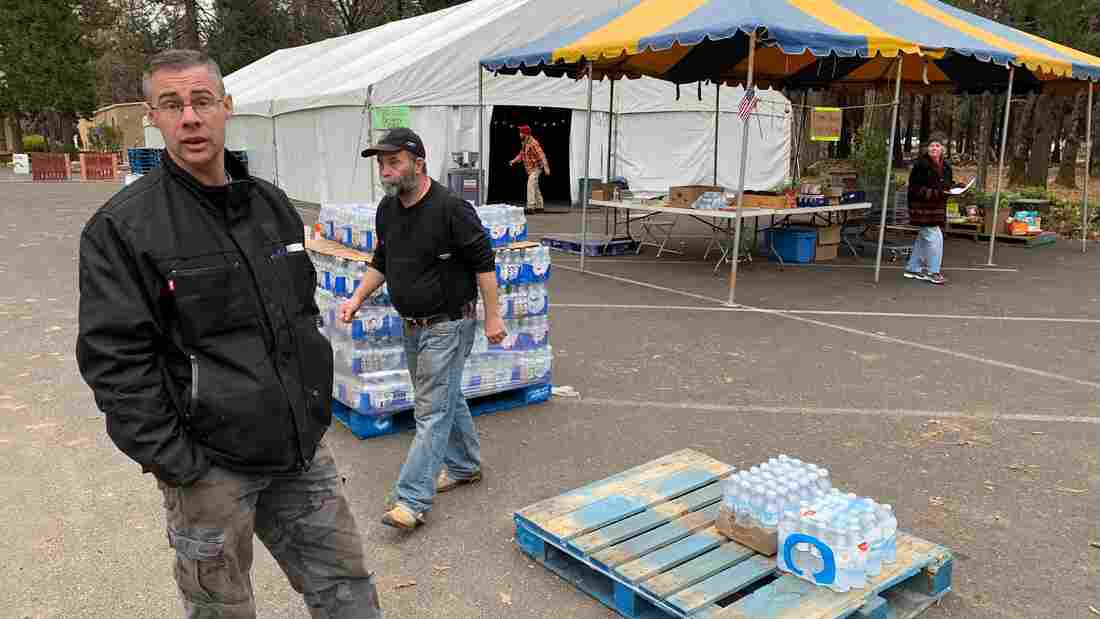 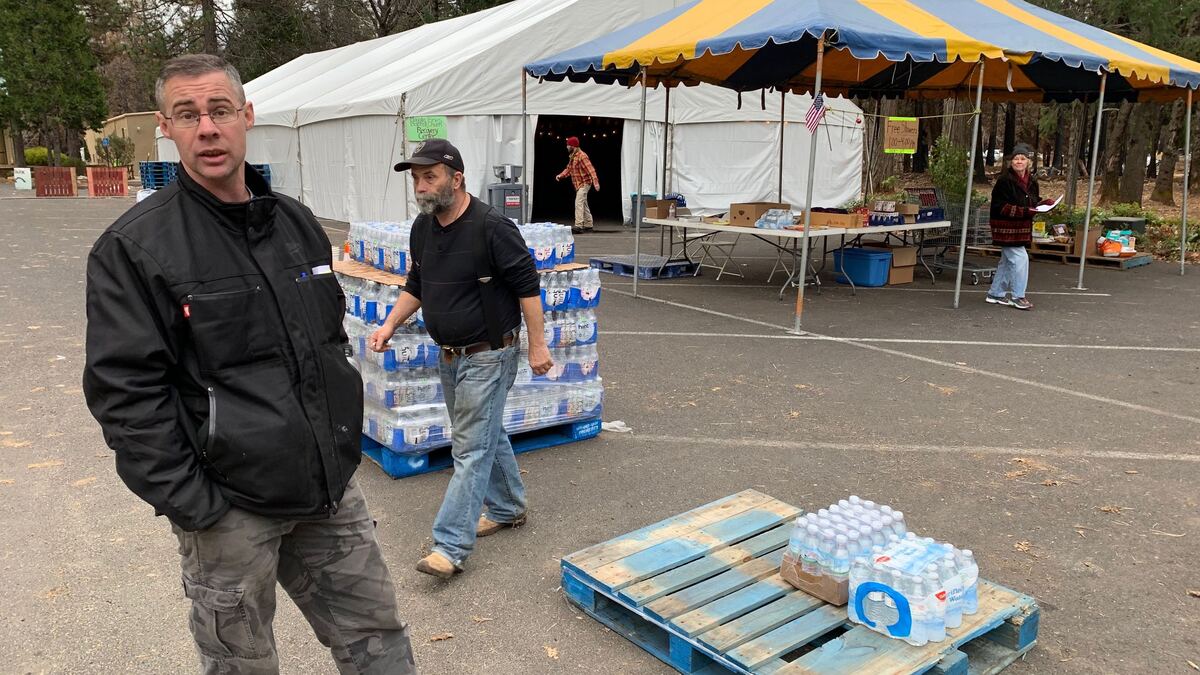 Duane Crowder is coordinating disaster relief at the Magalia Baptist Church, where 300-600 people show up each day for free meals.

Nevertheless, all around Paradise, utility crews are putting power lines back up on the windy one-way-in, one-way-out streets and cul-de-sacs where lot after lot is burned out. Gas lines and phone service are also being restored. But for whom? Some former residents and local leaders are starting to question whether anyone is really going to live here anytime soon.

"Paradise will probably not rebuild for a decade," Crowder says.

The monumental task of removing that debris is beginning this week in earnest, a job that could take well over a year. Disaster response officials say it's on a scale not seen in this country since the Sept. 11 attacks.

Even after that, rebuilding is no guarantee for a lot of people.

Crowder's father is the pastor at the Magalia Baptist Church, which did not burn. After the fire, the family transformed the facility into an aid station, a lifeline for up to 600 people per day. They come for free meals, pick up donated clothes, shoes. Spend just a few minutes there, and it's remarkable how fast the cases of bottled water get distributed from large pallets that Crowder can't get enough of. Paradise's water isn't safe to drink. Benzenes from burning plastics, soot and ash seeped into the town's water supply. 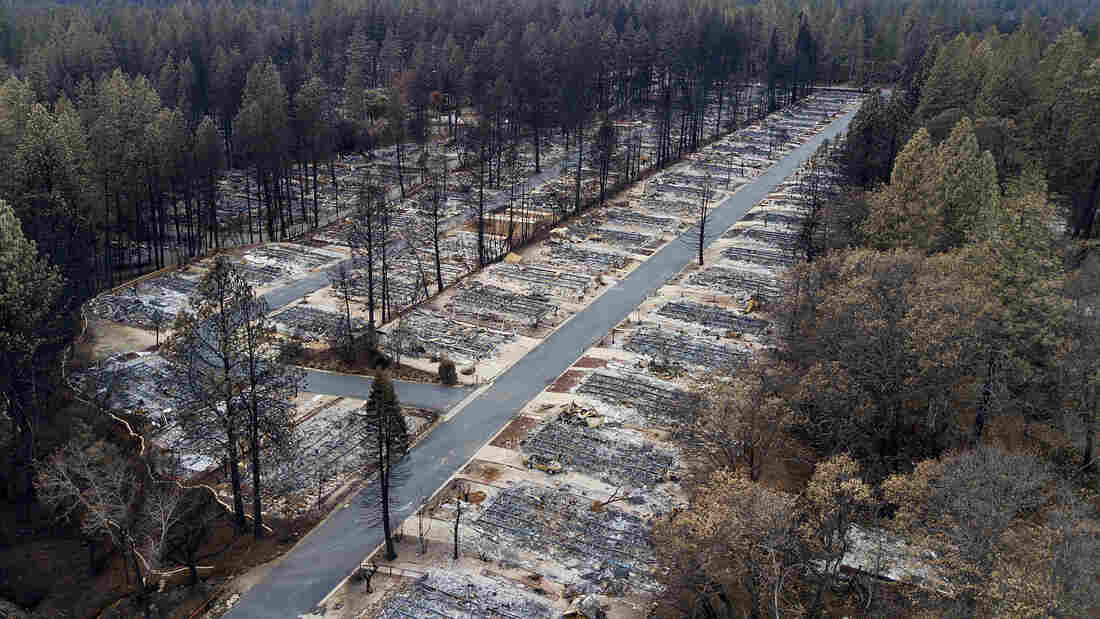 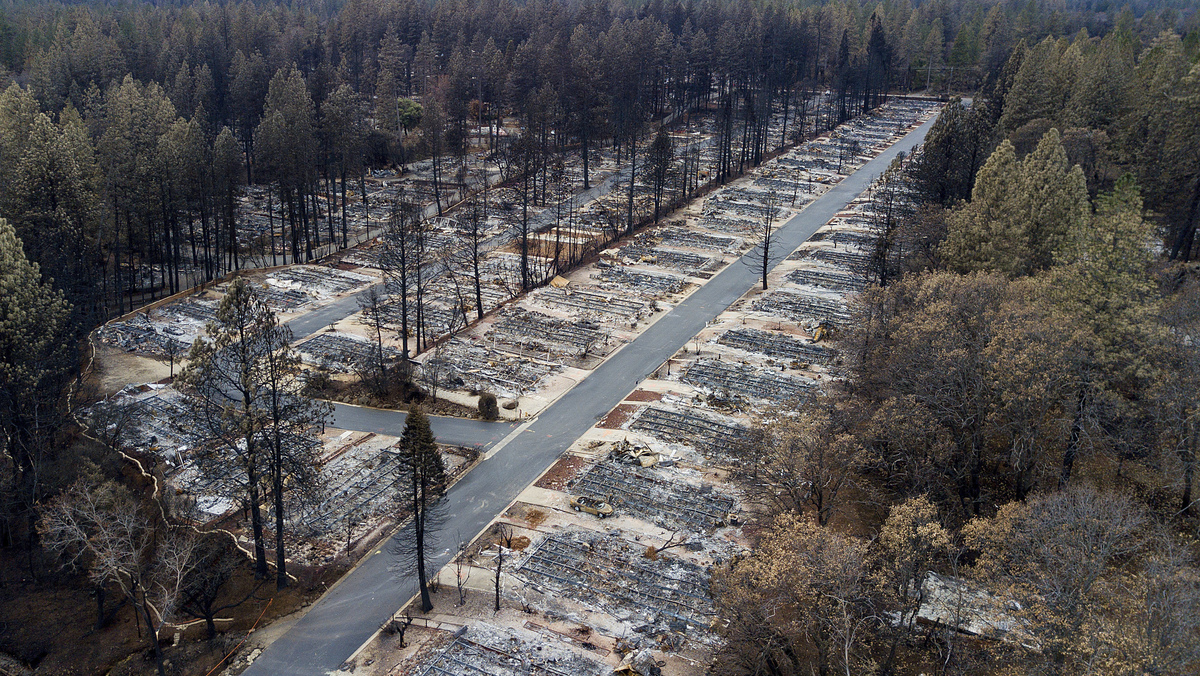 Most of the people who are still here have few other options but to live in their cars or a camper on their burned out property. A lot of people who could leave have left.

"People have just said you know what, nuts to it, we're out of here, there's not going to be anything here," Crowder says. "As the time goes on people start to realize, how much time this is going to take."

They've been staying with friends in a little town down in the valley ever since. Just along one small country lane, there are at least three other families doubling up in homes, in similar states of limbo.

The couple has already decided they won't rebuild. They don't want to go back. One of the biggest concerns is the toxicity. They were avid gardeners, and if it's going to take more than a year just to clear the lots, they say, it's anybody's guess when crews will get around to theirs. No one can even start planning to rebuild until the debris is removed, and the government has certified the sites are safe.

The Oslins watched as it went from a quiet, country town to a commuter city built out into the woods. It was cheaper — a haven for retirees on fixed incomes.

But the Oslins, and a lot of other people, were traumatized by the fire.

"We just don't want to go back up there," Bob says. "I don't know if I could sleep well if I woke up at two o'clock in the morning and heard the wind blowing, 40 miles and it's 80 degrees out, I'd lay there just wide awake thinking, 'oh boy.'"

They recently bought a new house in nearby Oroville.

The Camp Fire has again exposed the high risk of living in overgrown forests now prone to even more severe wildfires due to climate change. The aftermath is leading some to wonder whether this country's immediate response to natural disasters, the rush to rebuild and put everything back how it was, is the right thing to do.

Local leaders like Ed Mayer, for instance, say they've been puzzled by the apparent rush by utility crews to reinstall a lot of the infrastructure in Paradise.

"Their charge, given their funding streams, is to rebuild what was there, whether that makes sense or not," says Mayer, the executive director of the Housing Authority for Butte County.

It is a chicken-and-egg dilemma, though: how do you begin to even recover from a disaster if there's no infrastructure to support it? For most, rebuilding is so far off in the future that Mayer is doing all he can to help people relocate, mostly out of state. There was already a severe housing shortage here before the fire. 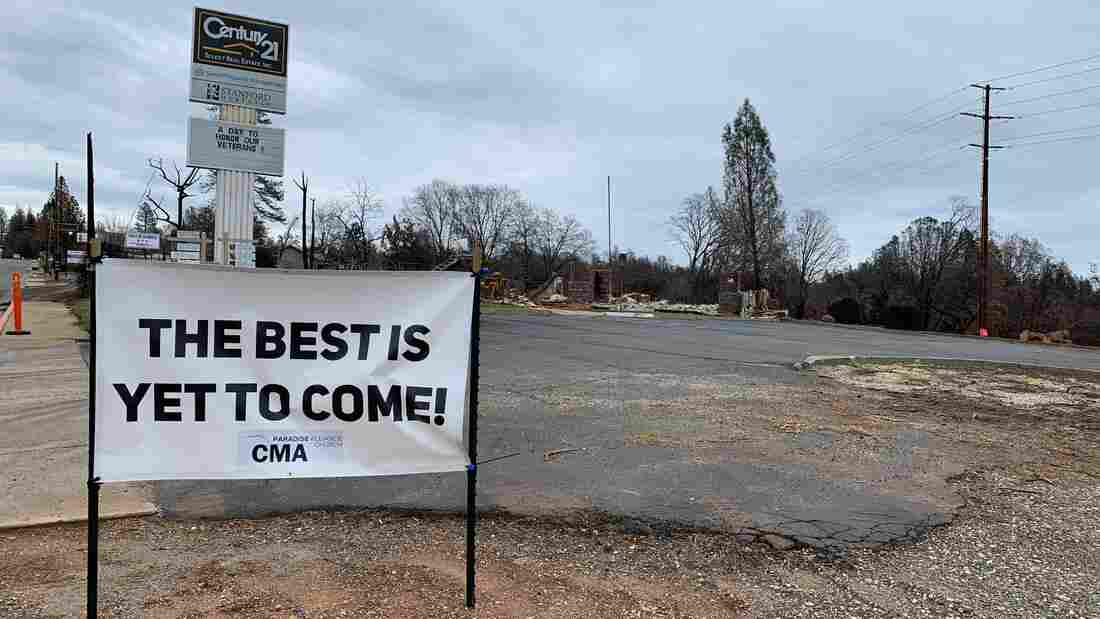 For many in Paradise, the reality is starting to sink in that it could take years to recover let alone rebuild. Kirk Siegler/NPR hide caption 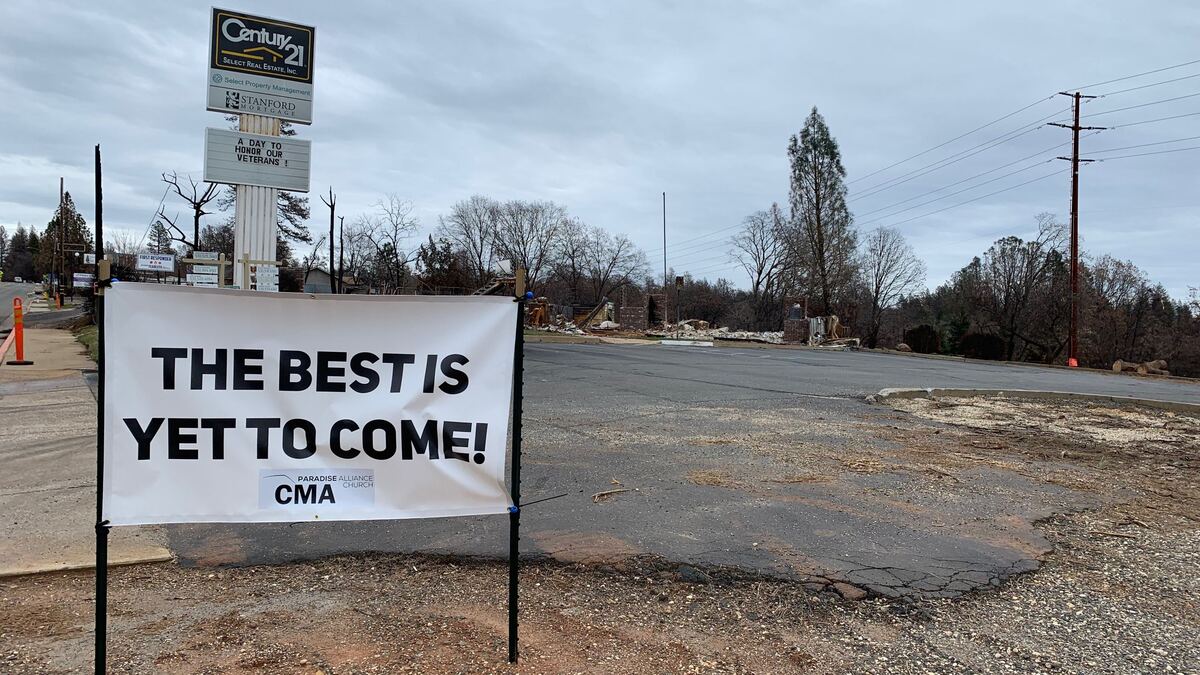 For many in Paradise, the reality is starting to sink in that it could take years to recover let alone rebuild.

"We see these populations coming out of Paradise, they want to stay with their community, they've been here for decades," he says. "But really, that's not an option."

Not an option right now for a place that is basically a skeleton — they're trucking in water to make coffee at Starbucks, the hospital is shuttered, the Safeway is rubble. And upwards of one million burnt trees need to be cut and hauled away

There's so much work to be done, some here question whether the town should even be reopened to the general public at this point. At the baptist church, Duane Crowder figures it's probably too soon to even talk about rebuilding. No one here has ever seen anything like this before.