Accessibility links
For State Of The Union's Responders, The Warm Glow Often Fades Fast Who could turn down what may be a once-in-a-lifetime chance to speak to the entire nation right after the president? 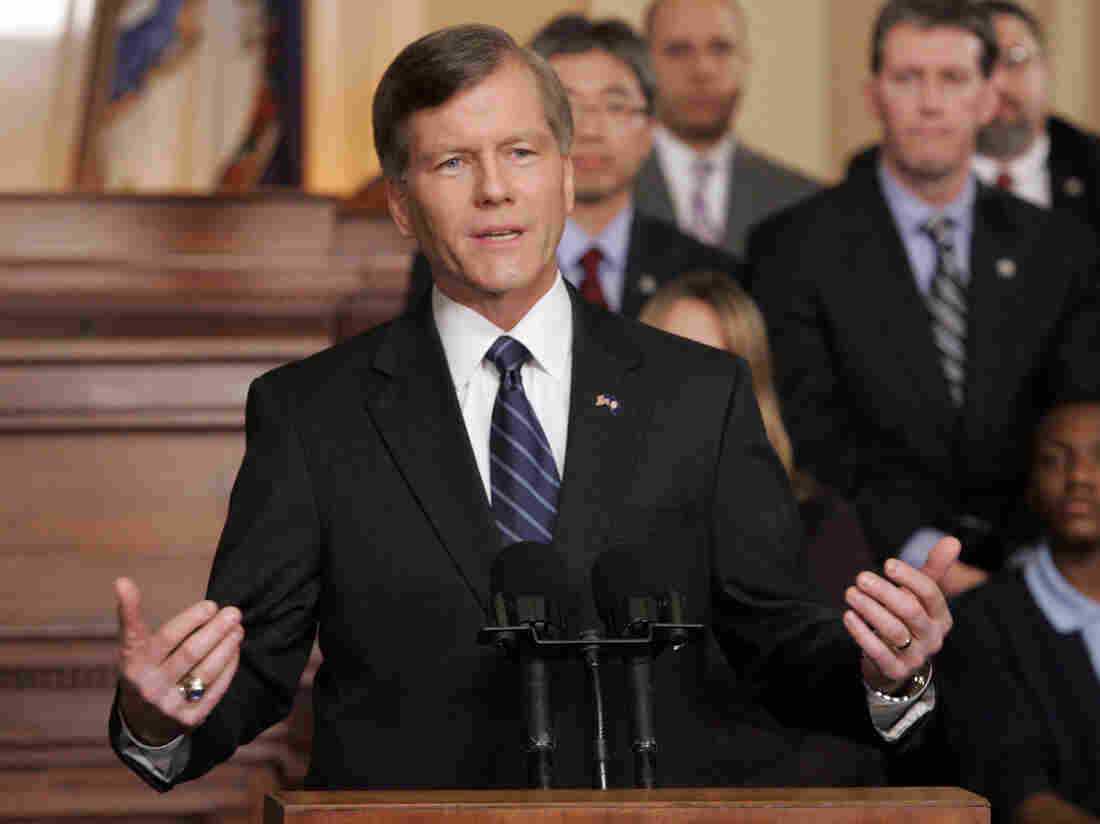 Then-Virginia Gov. Bob McDonnell gestures as he delivers the Republican Response to the State of the Union in the Virginia House of Delegates chambers at the Capitol in Richmond, Va., on Jan. 27, 2010. Steve Helber/Associated Press hide caption 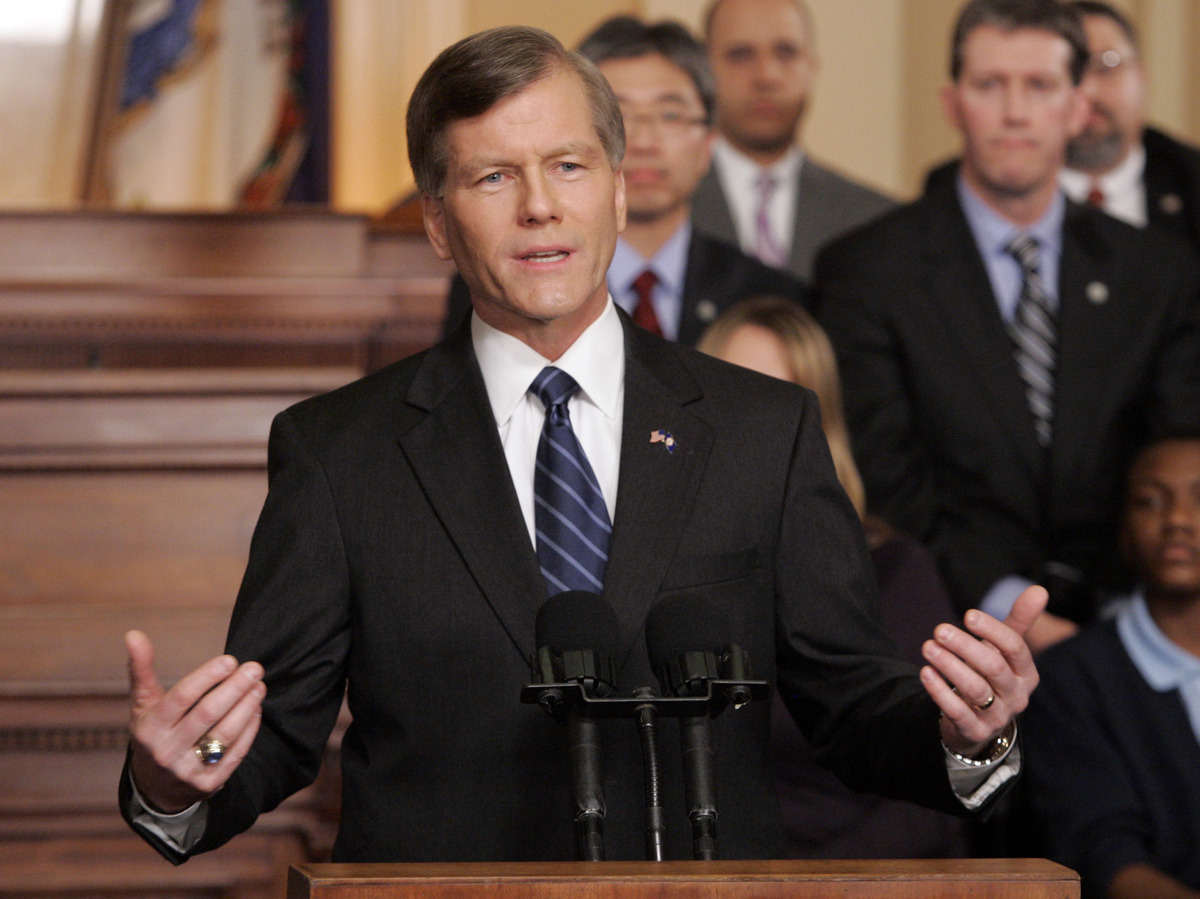 Then-Virginia Gov. Bob McDonnell gestures as he delivers the Republican Response to the State of the Union in the Virginia House of Delegates chambers at the Capitol in Richmond, Va., on Jan. 27, 2010.

Congratulations, Stacey Abrams, you have just won the most dubious political prize in Washington!

Abrams, a former Democratic leader in the Georgia State Assembly, was named last week to respond to President Trump's State of the Union address on Tuesday.

Who would question that it's a privilege to deliver the opposition party's response to the president's State of the Union address? Well, perhaps you could start with some of the people who have actually done it.

It may seem at first a shining proof of one's political potency, but as a career boost it often loses its oomph. It can even become a burden.

To be sure, being granted this opportunity is a stroke of political luck. It's just not clear that the luck has always been good.

Take Bobby Jindal, a former congressman and governor and presidential hopeful, who gave the Republican response after President Obama's first speech to a joint session of Congress in 2009. 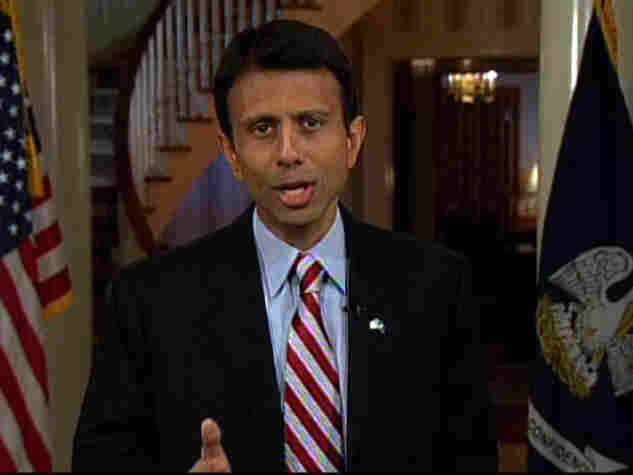 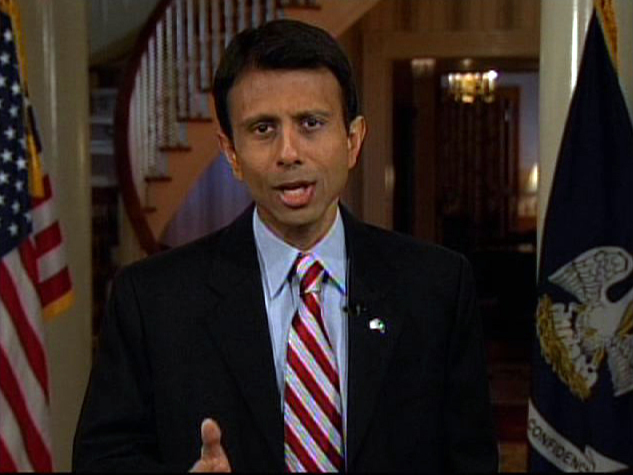 The former congressman and future presidential candidate chose to speak from the vestibule of the Governor's Mansion in Baton Rouge and looked like he was in a hotel lobby. His presentation was widely panned, not least by conservative commentators, as both stagey and impolitic (especially in handling sensitive issues such as the federal response to Hurricane Katrina in 2005). Jindal, then enjoying a meteoric rise, never quite recovered his trajectory.

After Jindal, the GOP found another fresh and promising governor in Virginia's Bob McDonnell, who delivered the response to Obama from Richmond in 2010. It was supposed to launch McDonnell's budding career on the national stage, but after four years as governor he was convicted and sentenced to two years in prison on federal corruption charges (a conviction later overturned by the Supreme Court.)

It wasn't quite as bad for Sen. Marco Rubio of Florida, who responded to Obama in 2013. Rubio delivered a response in both English and Spanish, but is mostly remembered for lurching off camera to grab a water bottle. Rubio was dismissed early in the 2016 presidential primaries but has at least re-established himself in the Senate since. 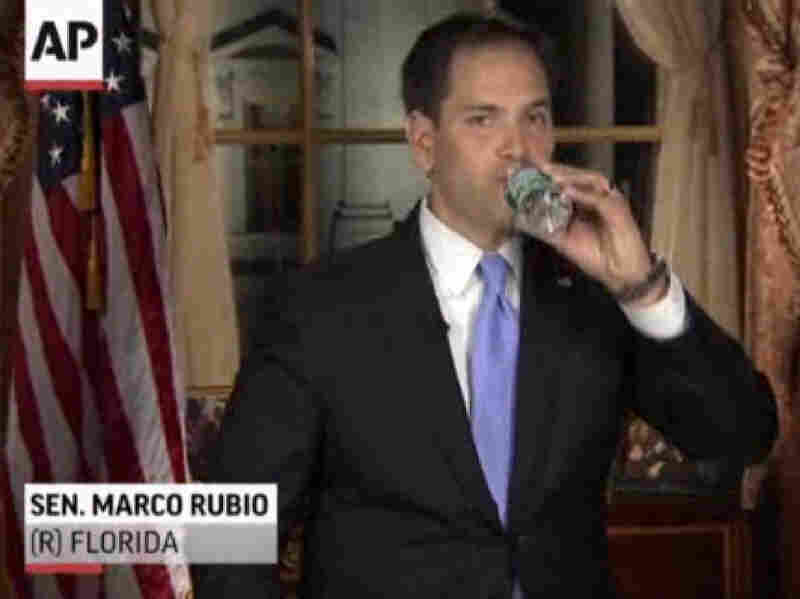 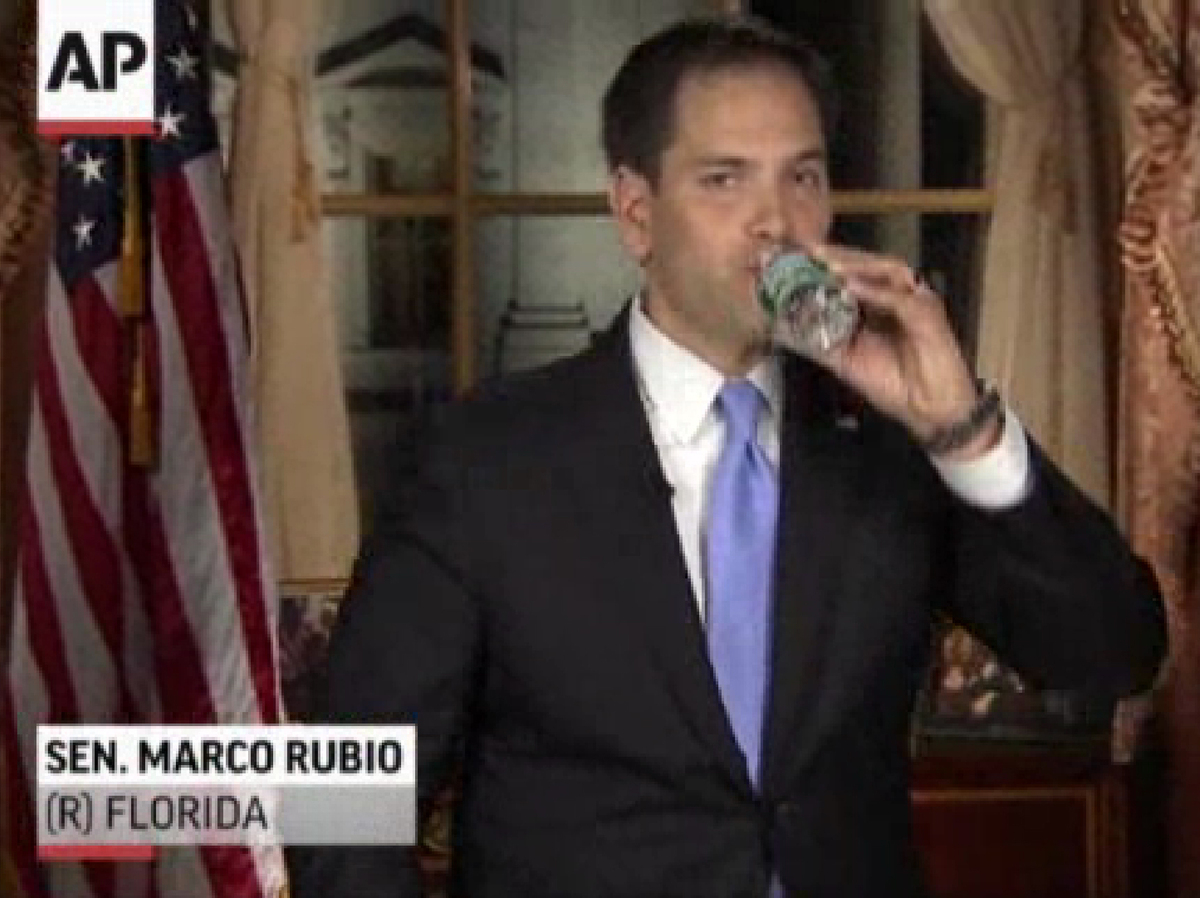 In this frame grab from video, Florida Sen. Marco Rubio takes a sip of water during his Republican response to then-President Barack Obama's State of the Union address, Tuesday, Feb. 12, 2013.

The response to the State of the Union sends a politician's name recognition skyward overnight but then leaves that peak moment isolated, a mere spike on the fever chart. Today, people hear you mention senators such as Bill Frist or Jim Webb or governors such as Gary Locke or Mitch Daniels and they have trouble picturing these former State of the Union responders in their minds. That surely goes for Steve Beshear, a former governor of Kentucky, who played the role just two years ago.

Still, who could turn down what may be a once-in-a-lifetime chance to speak to the entire nation right after the president?

Well, to be fair, it's not the entire nation but that portion of the audience that remains tuned in after the president's done speaking to that portion of the nation that tuned in for him. Last year, Trump drew 45.6 million people or about 19 percent of the voting age population, a percentage that tends to decline with each year of a president's tenure in office.

There also tends to be a bit of a time lag between the address and the response, which the TV networks fill with their own panels of journalists and politicians reacting to the speech. So the audience falls off substantially.

And we should add that the opposition responder is far from having equal footing with the president, who speaks before the whole Congress and nearly all the Cabinet and Supreme Court in person in the House Chamber in the U.S. Capitol. The first responder for the opposition speaks from, well, somewhere else.

Then there is the problem of what to say. The response has routinely consisted of prepared remarks, read from teleprompters. The logistics of preparing and producing a real-time response only after hearing the president would not only be daunting, but potentially disastrous. 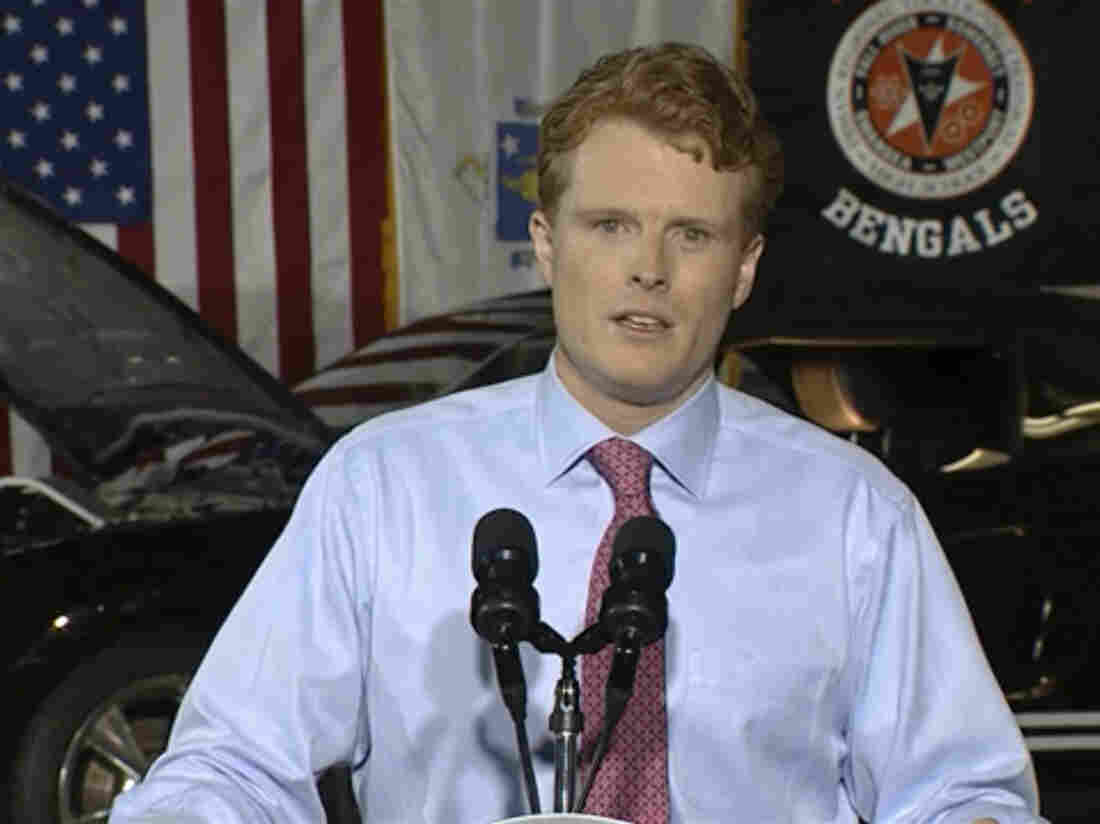 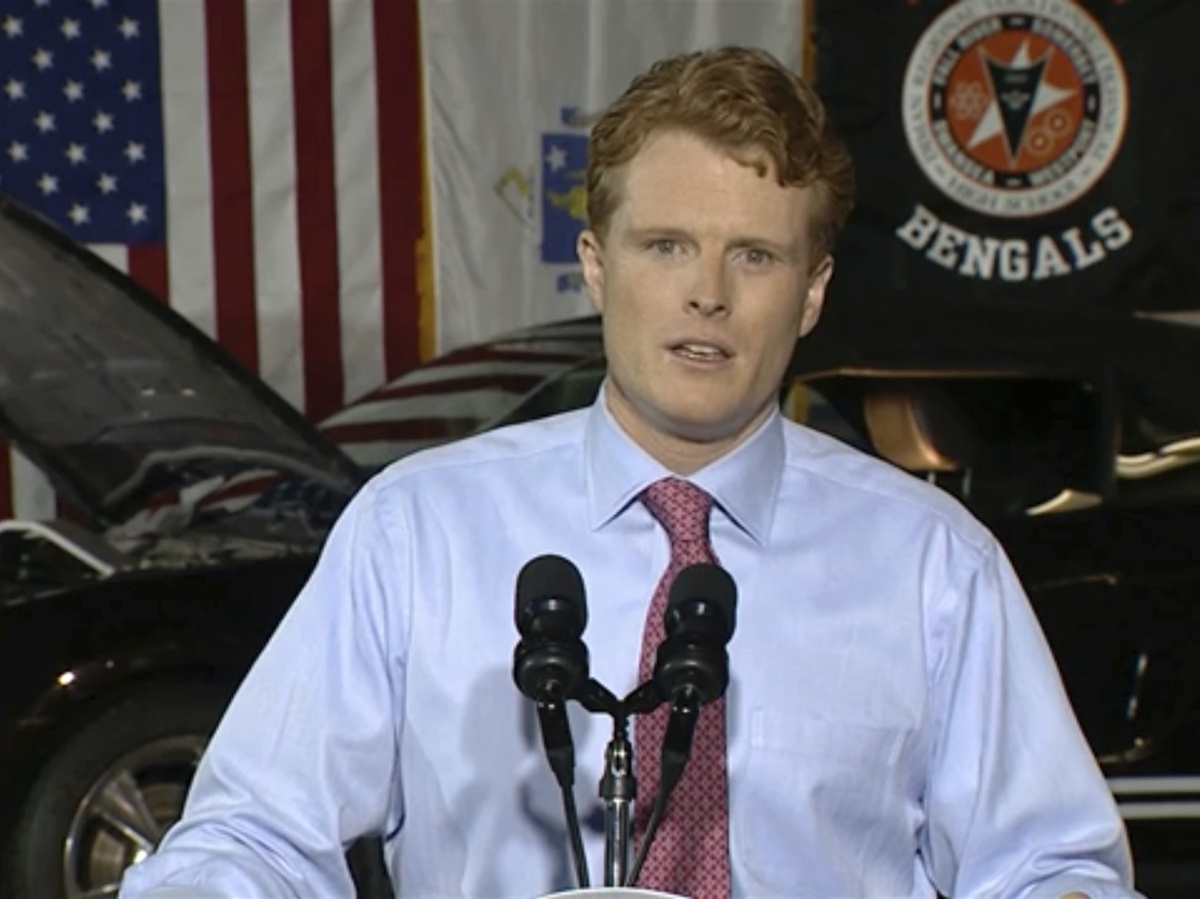 So even a well-crafted and savvy response can easily sound stilted or stale, especially if delivered in a studio. The latest Democratic responder, Rep. Josephy Kennedy III from Massachusetts, managed to upgrade his TV moment last year largely by speaking to a live audience in Fall River, Mass.

The first generation of these televised opposition party responses emerged in 1966 and 1967. The president was Lyndon B. Johnson, the responders were the leaders of the Republican minorities in the House (Gerald R. Ford of Michigan) and Senate (Everett Dirksen of Illinois). Ford would later be president, while Dirksen became a Senate office building on Capitol Hill.

Thereafter, the GOP began experimenting with a group approach featuring a posse of legislators from around the country. The Democrats followed suit after Republican Richard Nixon became president, and they again relied on the gang-tackle tactic when Ronald Reagan first came to office in the 1980s.

The gang in this case, as late as 1982, was ten Democrats who were all white males from Congress. The following year the contingent was an even dozen, including one congresswoman who was also white. Not exactly what you would call looking like the country.

After that, the Democrats tried taking the show out of Washington to get closer to "real people." That worked pretty well for Arkansas Governor Bill Clinton in 1985, moderating a group of voters and getting folksy for the camera, perched on a stool.

In 1987, the parties and networks agreed to the current format, televising the response live as soon as possible after the State of the Union itself. The first two Democrats who had to follow Reagan's act that year were Sen. Robert C. Byrd of West Virginia and House Speaker Jim Wright of Texas. Both looked pale and stiff and sounded much like the Dixie-based Democratic Party of generations past.

Just two years later, the responding chores passed to a senator from Maine, George Mitchell, and a House Speaker from Washington State, Tom Foley, reflecting the shift in the parties' regional alignment.

When Clinton became president in 1993, it had been a dozen years since the Republicans had needed to pick a responder. They started with their congressional leaders, Sen. Bob Dole of Kansas and Rep. Bob Michel of Illinois. But in 1995 the GOP looked outside the Capitol to a new governor of their own, Christine Todd Whitman of New Jersey. She managed to embody diversity of age and gender while symbolizing the sweeping Republican victories of the 1994 midterms. (House Speaker Newt Gingrich, who would sit behind Clinton for three State of the Union addresses, did not deliver any of the GOP responses.)

When George W. Bush was president, the Democrats mostly relied on their leaders in the House and Senate. Nancy Pelosi took part in the ritual twice. But three Democratic governors from Virginia, Kansas and Washington State were part of the mix as well.

In recent years, there has also grown up a new tradition of mutiple responses by politicians who may or may not be speaking for one of the major parties.

In 2014, when Rodgers gave the official GOP response (and Rep. Ileana Ros-Lehtinen of Florida provided a Spanish version), Senators Mike Lee of Utah and Rand Paul of Kentucky also mounted responses. Lee spoke to a small audience and cameras for the website of the Tea Party Express. Paul posted his rebuttal on his web site, Facebook and YouTube.

It was against all this complicated backdrop that Senate Democratic Leader Charles Schumer (who makes the choice in alternation with House Speaker Nancy Pelosi), looked to an unconventional choice for this week's Democratic response.

Abrams is not only the first African American woman to give her party's official response, she is the first person to do so who has held neither a statewide office nor an elected federal office. She is a former head of her party caucus in the Georgia legislature, but on the national stage she is known almost exclusively for having narrowly lost her bid for governor of Georgia in November 2018.

But if Abrams is known primarily for a race she lost, at 45 she is also an avatar of her party's rising strength among younger voters, women and people of color. While she ultimately fell short in 2018, she was emblematic of the enormous upwelling of political activism among women that was the defining characteristic of the midterm elections at all levels nationwide.

And the response role makes sense for Abrams and her political profile as well. If she wants to run for the U.S. Senate in 2020 (as rumored) it will be helpful to keep her name nationally prominent for fundraising. Alternatively, while there is no shortage of potential running mates for the Democratic ticket next year, Abrams could bring a unique blend of assets to that role.

That would be especially true if she can defy the troubled history and uncertain karma of her assignment on Tuesday night.