Accessibility links
Eyes On Lt. Gov. Justin Fairfax As Gov. Northam Resists Calls To Resign With Virginia Gov. Ralph Northam's future in doubt over a racist photo, many are looking to the next in line. But now Fairfax is defending himself against a sexual assault allegation. 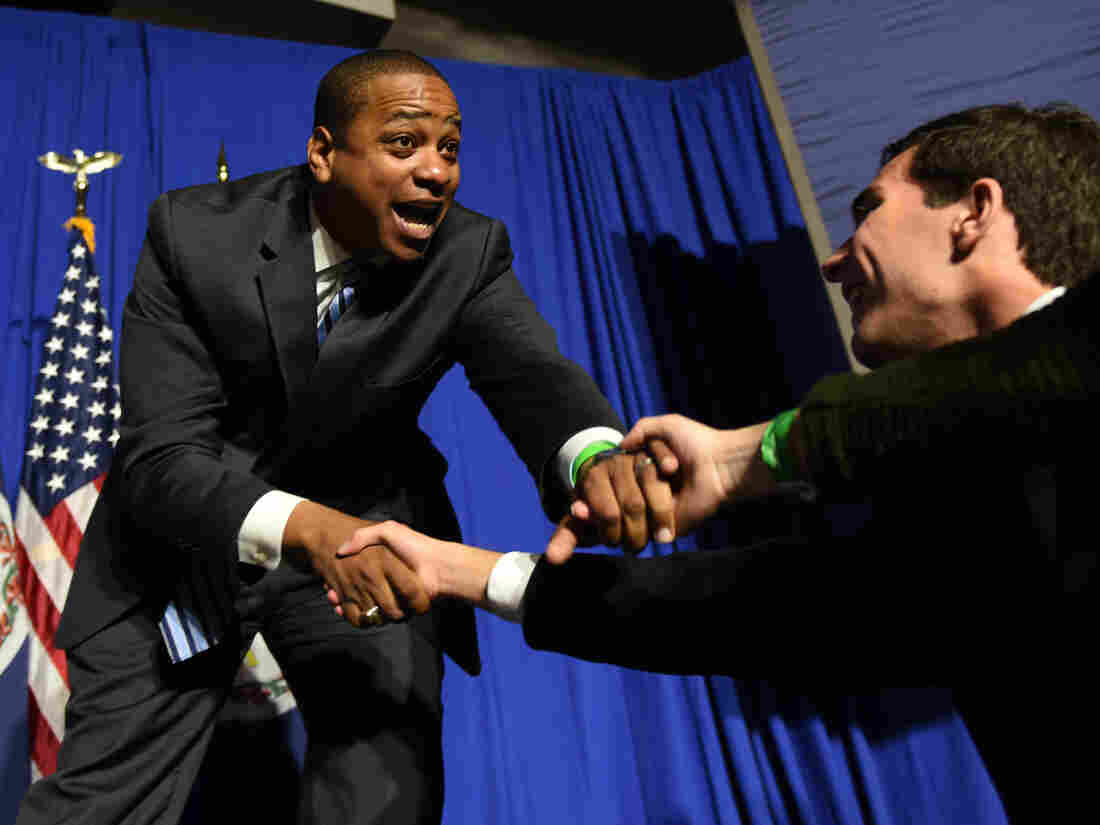 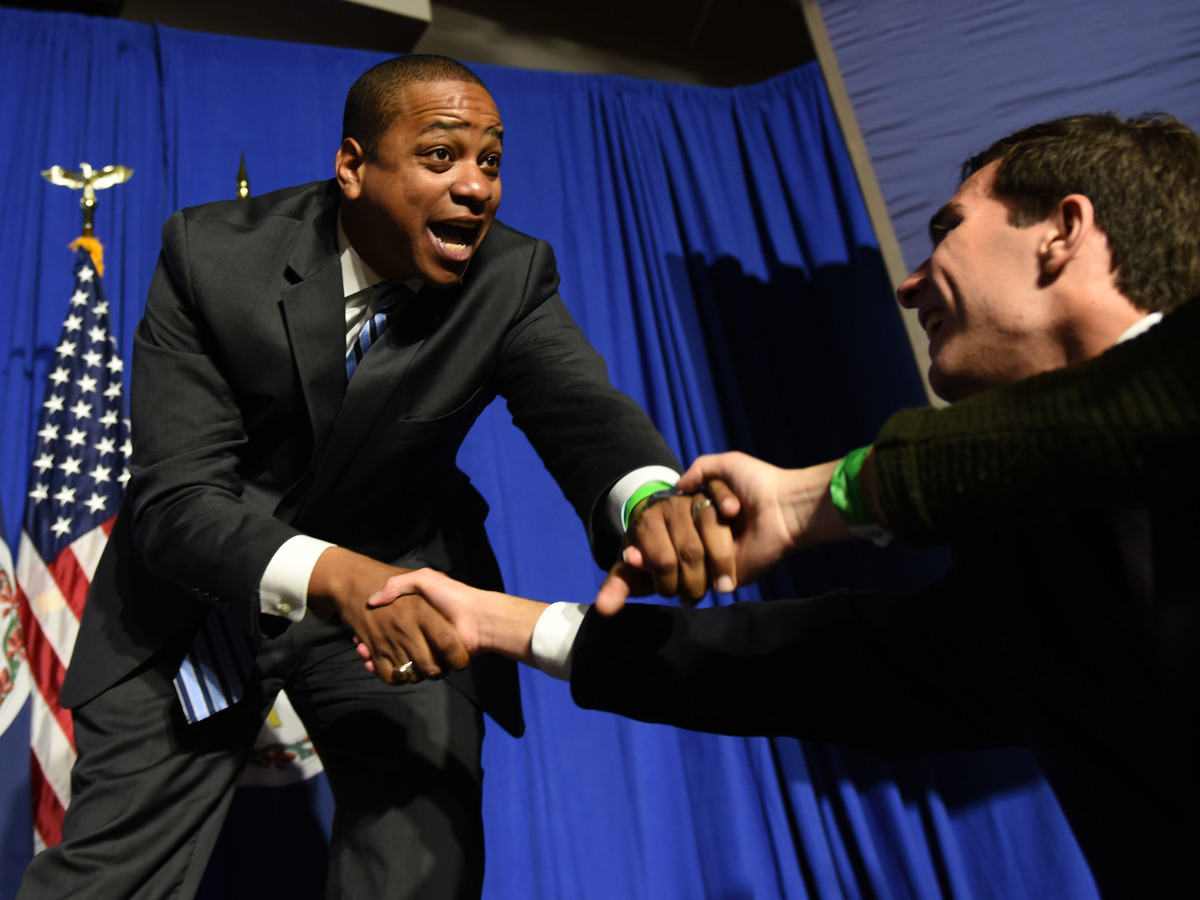 Lt. Gov. Justin Fairfax is a lot of things Virginia's current governor is not: young, charismatic and part of a multicultural wave sweeping through the commonwealth's Democratic Party.

He could soon be called upon to lead the state, should Gov. Ralph Northam, a fellow Democrat, reverse course and adhere to the avalanche of calls — from inside and outside Virginia — for him to resign.

If that happens, Fairfax would be only the second African-American governor to serve in the history of Virginia, and one of just a few across the country since Reconstruction.

Fairfax, who is 39, was seen as a rising star within the party long before the controversy surrounding Northam's 1984 medical school yearbook page, which includes a picture depicting one man in blackface and one dressed as a Ku Klux Klan member, erupted late last week. Northam has resisted calls to resign.

The Washington Post has reported that the accuser "described a sexual encounter that began with consensual kissing and ended with a forced act that left her crying and shaking." The Post said it did not publish a story when it learned of the allegation months ago because the publication was not able to corroborate the woman's account.

Fairfax, speaking to reporters as he left the state Senate Monday, acknowledged he met the woman in 2004 and said they "ended up going to my hotel room." But, NPR member station WVTF's Mallory Noe-Payne reports, he denied the alleged sexual assault, calling the accusation "completely false," "completely uncorroborated" and "totally fabricated."

"Everything was 100 percent consensual," he said.

He mentioned his wife and young daughter, saying his family and faith are strong.

Fairfax's office also released a statement earlier Monday on Twitter denying the allegation. "Lt. Governor Fairfax has an outstanding and well-earned reputation for treating people with dignity and respect. He has never assaulted anyone — ever — in any way, shape, or form," the statement read, adding that the lieutenant governor "will take appropriate action against those attempting to spread this defamatory and false accusation."

Since assuming office a little more than a year ago, Fairfax has drawn praise for standing up against celebrations of Virginia's racist past.

As lieutenant governor, one of Fairfax's duties is to preside over the state Senate. Last month, on Robert E. Lee's birthday, while elected officials paid tribute to the Confederate general, Fairfax stepped off the dais and sat in quiet protest.

"I want to be clear that my children, my grandchildren will not see me on videotape presiding over a motion honoring people who fought for a set of laws and a society that would have enslaved members of their family," Fairfax told WVTF shortly after the protest.

Bourne is a member of the Virginia Legislative Black Caucus, which has called for Northam's resignation. He says Fairfax's protest sent a message that racism and bigotry are things in Virginia's distant past.

Fairfax is descendant of a Virginia slave, named Simon Fairfax, who was emancipated in 1798. The lieutenant governor says that he had a copy of his great-great-great grandfather's manumission documents in his pocket when he was sworn into office in 2018.

Fairfax received his undergraduate degree from Duke University and studied law at Columbia, both on scholarship. Before taking office, he served as assistant U.S. attorney for the Eastern District of Virginia.

His wife, Dr. Cerina Fairfax, is a dentist who has a family practice in Northern Virginia. They have two young children, Cameron and Carys.

For his part, Fairfax has not called on Northam to resign following the revelation that the governor's yearbook page included a racist photo.

In a statement Saturday, Fairfax said he was "shocked and saddened" by the images, and he told NBC4 in Washington that he hoped the governor would come to the right decision. "We're at this really important inflection moment in the history of Virginia, and this nation, and we need leaders and leadership that can unite us," Fairfax said.

Northam apologized for appearing in the photo late Friday and "for the hurt that decision has caused then and now." On Saturday, he reversed his position, saying he was actually not in the photo.

Virginia Democratic Sens. Tim Kaine and Mark Warner have called on Northam to resign. So have leading presidential hopefuls Sens. Cory Booker of New Jersey and Kamala Harris of California.

So did former Vice President Joe Biden, who also tweeted over the weekend that "Justin Fairfax is the leader Virginia needs now."

There is no place for racism in America. Governor Northam has lost all moral authority and should resign immediately, Justin Fairfax is the leader Virginia needs now.

Not to mention President Trump and former presidential candidate Hillary Clinton, who have also called for a resignation.

Rachel Bitecofer, a political science professor at Christopher Newport University in Newport News, Va., says Fairfax leading Virginia through this time of healing could be a good thing for the state.

"I do think there's a lot of symbolic value from having Justin Fairfax become the state's governor at this critical juncture in American politics, particularly here in Virginia where racial politics have been so much in the limelight."

She points to the deadly clashes in Charlottesville, Va., at a Unite the Right rally, and to 2018 GOP Senate nominee Corey Stewart, who ran as a champion of Confederate values.

She adds that should Fairfax serve the remainder of Northam's term, he would be eligible to run for a full four-year term in 2021. Under Virginia's Constitution, governors are limited to one elected four-year term. But because Fairfax would assume the role, he could run again.