Accessibility links
A First: Women Take The Majority In Nevada Legislature And Colorado House Monday, Nevada's Legislature becomes the first in U.S. history to have a majority of female lawmakers. In Colorado, also a first, women hold the majority in the House of Representatives.

A First: Women Take The Majority In Nevada Legislature And Colorado House

A First: Women Take The Majority In Nevada Legislature And Colorado House 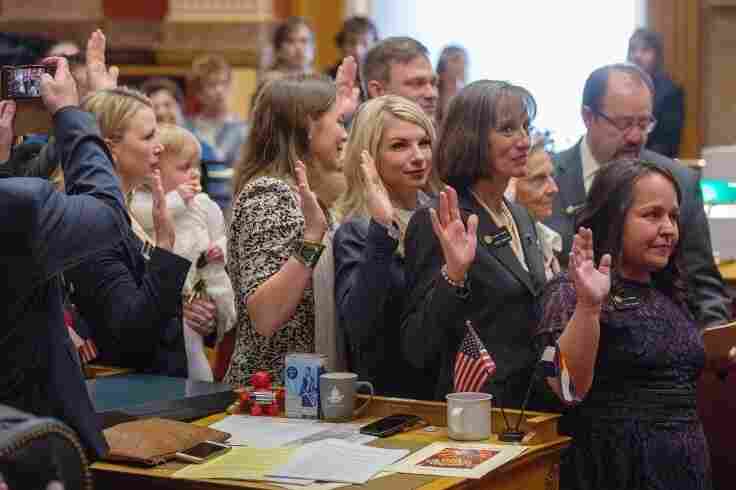 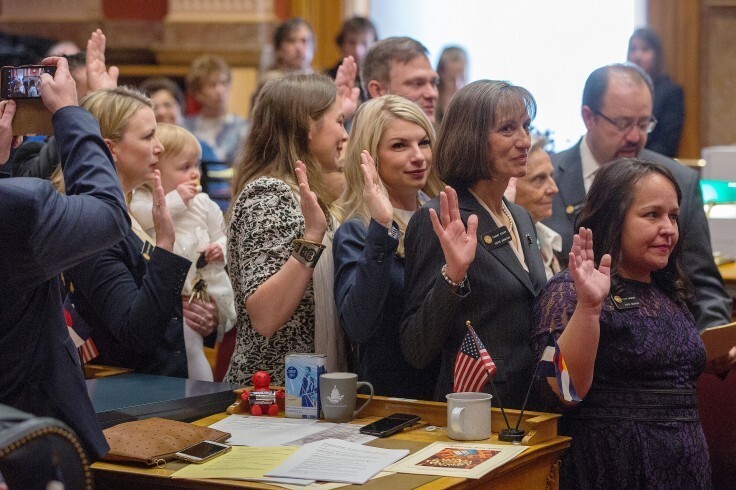 On Monday, Nevada's statehouse begins its legislative session by marking a major milestone. It's the first time in our nation's history that any state legislature holds a majority of female lawmakers. Just like the country, the body is slightly more than half women.

"It's been a long, hard fight. I'm starting to see some of the fruits of not just my labor, but the labor of so many other people whose names I don't know," says Patricia Ann Spearman, a Democrat and Nevada senator who was first elected in 2012.

Spearman is used to struggling to break barriers for minorities and women. She's 64, a black woman, a lesbian, a retired lieutenant colonel in the Army and an ordained minister.

With its overall majority, Nevada is the exception. This year, 50.8 percent of state representatives and senators, combined, are women. And it's one of only two states that have a female majority in any one chamber. The other is Colorado's lower house, where there are three more women than men. A single chamber majority has happened only once before, in New Hampshire about a decade ago.

"Women hold fewer than 30 percent of state legislative seats across the country, fewer than 25 percent of congressional seats, so getting to 50 percent in any one place is something significant," says Kelly Dittmar, a scholar at the Center for American Women and Politics at Rutgers University. "So we still have a lot of progress left to make across the country to have women equally represented in our legislative institutions," she says.

In fact, in Mississippi, West Virginia, Alabama and Louisiana, women make up about 15 percent of state lawmakers.

Even in the "year of the woman" — as 2018 was regularly called — it's obvious that progress has been slow. In 1992, also a breakthrough year, women made up 20 percent of representation across the country. This year, as 2018 winners take office, it's 28 percent.

The reasons it has taken so long to reach gender parity, Dittmar says, are many. Of course, there was the formal exclusion of women from public service. For a long time, women couldn't vote or run. But then there is the informal exclusion based on gender stereotypes, including long-held beliefs that women can't lead or balance their personal and professional lives. Dittmar says those old platitudes can also create obstacles to fundraising.

"You have typically had men in party leadership and political leadership. Those are the people who are tapping candidates, who are recruiting candidates to run and deciding who gets on the ballot. Those recruitment networks have been, for a long time, very male-dominated."

The only way to achieve gender parity is to invest in women. And Democrats are doing that — 70 percent of women who are state lawmakers are Democrats. While women in the Democratic Party gained seats across the country in 2018, women in the Republican Party lost state legislative seats.

"If we want to see parity, it means that we also need to increase the number of Republican women, because we're not going to get to gender parity in most places if we don't fare better in both parties," Dittmar says.

Her point is underscored in Colorado where Democrats intentionally recruit women to be candidates.

"The bump we've seen in Congress and state legislators this year is really about voters responding to powerful, smart, thoughtful women who are running," says Emerge Colorado Executive Director Michal Rosenoer. "And we've got those women running right now because we've been investing in women candidates for a decade or more now."

Emerge Colorado is part of a national organization working across half the states in the country. Organizers recruit and train Democratic women to run for office.

"Women tend to need to be invited or asked to run five to seven times," Rosenoer says. "Whereas, I think, if you're a man, you wake up and put your tie on in the morning and you think to yourself, 'Hey, I kind of look like the president.' "

Newly elected Democratic Rep. Serena Gonzales-Gutierrez of Denver participated in Emerge Colorado's six-month training program. She says she wouldn't have run for elected office if a friend hadn't encouraged her to do it. "I just never thought that was something I would go into." She worked in the field of child welfare and juvenile justice, and when she told people she was considering running for office they would say, " 'Well, don't you have small children?' — as if to discourage me."

"That made me want to fight more," Gonzales-Gutierrez says. "That's all the reason that I am doing this." Other national groups like VoteRunLead aren't restricted to one side of the aisle and train GOP women, too. Their candidates are encouraged to "run as you are" and they expect to train 30,000 more women by 2020. These local and state elections are seen as pipelines for women to move to higher office.

At the moment, Republicans lack a targeted recruitment and training effort for female candidates.

Colorado fell into the nationwide trend in 2018 when Republican women lost ground. In Nevada, they picked up one extra seat while Democrats picked up eight, including two that were appointed.

Jill Tolles, a Republican assemblywoman in Nevada, says she has been working to expand mentorship and recruiting for women and minorities in her party.

"Before I ran for office I did look at the makeup and think, 'There's just not as many females in the Republican Party, and how do we change that?' " she says.

In the last Nevada Legislature, which had just under 40 percent women, the assembly members and senators created a bipartisan, bicameral women's caucus to promote collaboration.

"We were able to come together over the areas where we share common ground and be able to advance some access to women's health care like access to breast cancer screenings and access to birth control," says Tolles. The group also worked together on bills to combat sex trafficking.

Neither Tolles nor Spearman is new to Nevada's Legislature, but Democratic Assemblywoman Selena Torres is serving for the first time. She is a high school English teacher and 23 years old.

"It's really exciting to be part of this female majority, but also to be a Latina sitting in that majority," she says. "And when you have students that are recognizing, maybe for the first time, that they too have the ability to be involved and run for office, it truly highlights the importance."

She's only a few years older than her students in a largely Latino district in southern Nevada, a state that is more than a quarter Latino.

Torres says Nevada has always been a pioneering state with women as trailblazers.