Accessibility links
As Magnetic North Pole Zooms Toward Siberia, Scientists Update World Magnetic Model The magnetic north pole has been drifting away from the Canadian Arctic at a brisk 55 kilometers — about 34 miles — per year, with ramifications for military and civilian travelers. 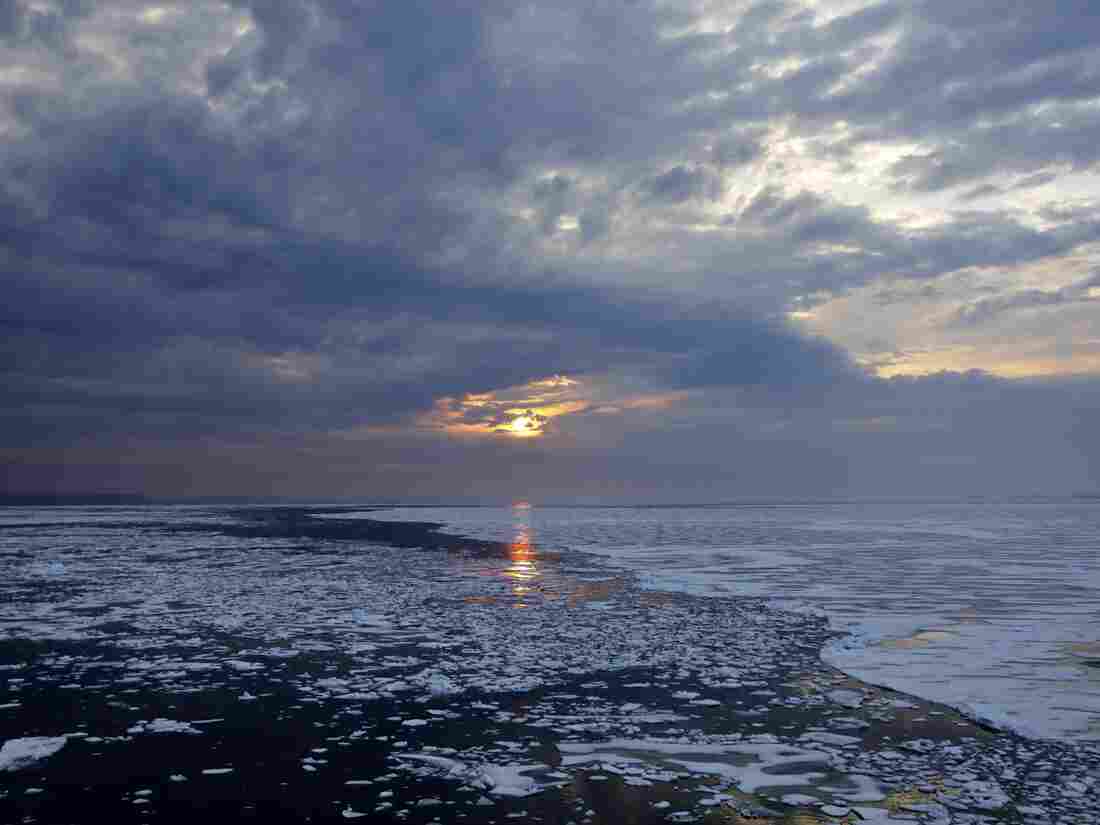 The sun sets over Canada's Arctic Archipelago. Earth's magnetic north pole has been moving away from the Canadian Arctic and toward Siberia at a rate of 55 kilometers (34 miles) per year. David Goldman/AP hide caption The sun sets over Canada's Arctic Archipelago. Earth's magnetic north pole has been moving away from the Canadian Arctic and toward Siberia at a rate of 55 kilometers (34 miles) per year.

North is on the move, and that's a problem for your smartphone's maps.

Earth's geographic north pole is fixed. But the planet's magnetic north pole — the north that your compass points toward — wanders in the direction of Siberia at a rate of more than 34 miles per year.

That movement may seem slow, but it has forced scientists to update their model of Earth's magnetic field a year earlier than expected so that navigational services, including map-based phone apps, continue to work accurately.

The drift results from processes taking place at the center of the planet. Molten iron and nickel slosh and spin in the planet's core, essentially serving as a metallic conductor for Earth's magnetic field. Changes in that fluid flow lead to changes in the magnetic field.

As a result of those changes, the accuracy of the National Oceanic and Atmospheric Administration's World Magnetic Model (WMM) — a mathematical representation of the magnetic field — slowly deteriorates in the five-year periods between updates.

The next update was due in 2020. But "unplanned variations" have degraded the quality of the WMM so greatly that NOAA published an out-of-cycle update Monday. It was delayed from January by the partial government shutdown.

Researchers had known that the model was in trouble for about a year, Nature reports. Arnaud Chulliat, a geomagnetist for NOAA, spoke to a meeting of the American Geophysical Union last year about realizing how inaccurate the model had become.

"That was an interesting situation we found ourselves in," said Chulliat. "What's happening?"

The explanation was twofold, he said. The pole's continuous movement away from the Canadian Arctic was a problem for the model, as usual. Add in a 2016 geomagnetic pulse beneath South America that shifted the magnetic field, and you had a model too inaccurate to wait for next year's update.

The new version of the WMM should stay relatively accurate until the 2020 update comes out as planned.

The early release is good news for a wide array of federal, commercial and military services that rely on the model. Services like undersea navigation and air traffic management wouldn't function properly without an accurate model, according to NOAA.

Smartphone maps count on magnetic sensors — and the WMM — to figure out the direction of magnetic north. (Think of how Apple and Google Maps show you which way you're facing as you turn a corner or rotate your phone.) And the U.S. Forest Service and NASA rely on the model as well.

Earth's magnetic north pole has been moving toward Russia at least since the pole was discovered in 1831, according to NOAA. And rock sampling shows that Earth's magnetic field has been shifting for millions of years.

Migratory animals, including birds, butterflies and whales, make use of the magnetic field for directions. Other animals can also sense the field, including cows, which tend to orient themselves toward a magnetic pole while grazing.