Accessibility links
Trump To Deliver State Of The Union Address In Shadow Of The Wall The border wall fight has swamped all else on President Trump's agenda for weeks. Tuesday night's address could be a chance for him to reset the conversation. But will it? 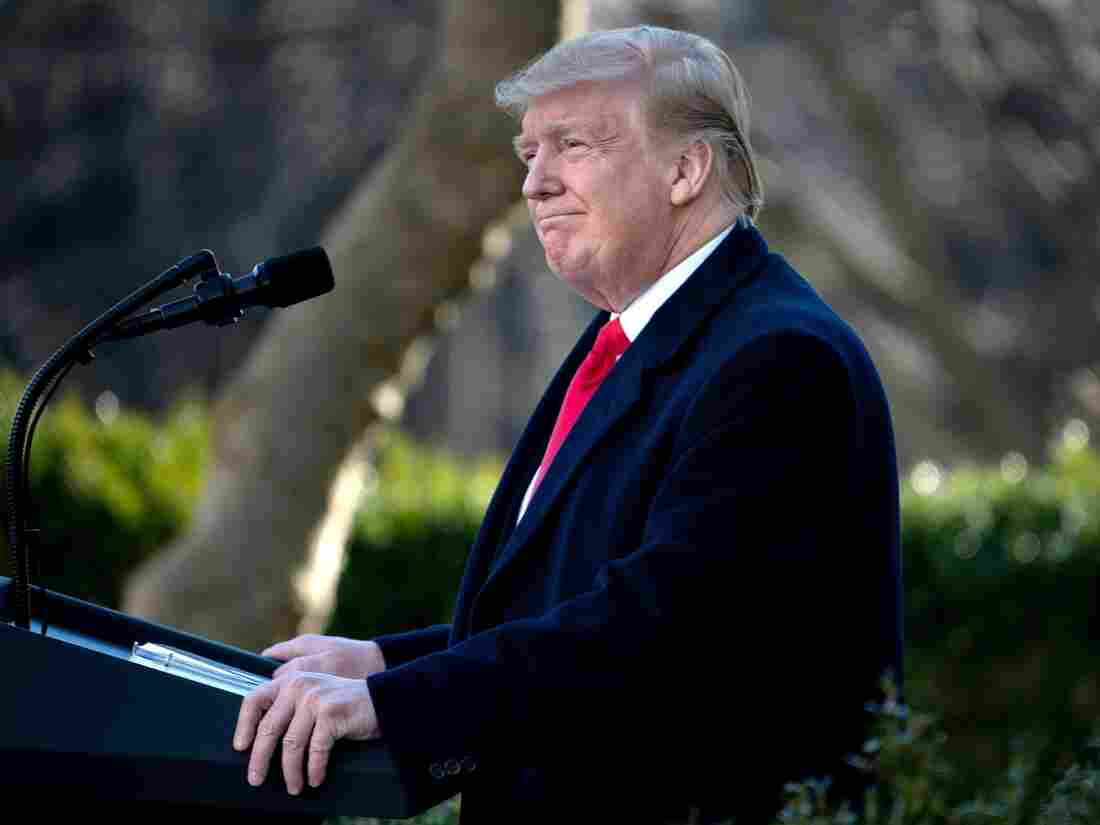 President Trump speaks on a deal to end the partial government shutdown last month. While Trump is expected to maintain his demand for border wall funding in his State of the Union speech, he is also expected to mention issues that carry bipartisan support. Brendan Smialowski/AFP/Getty Images hide caption 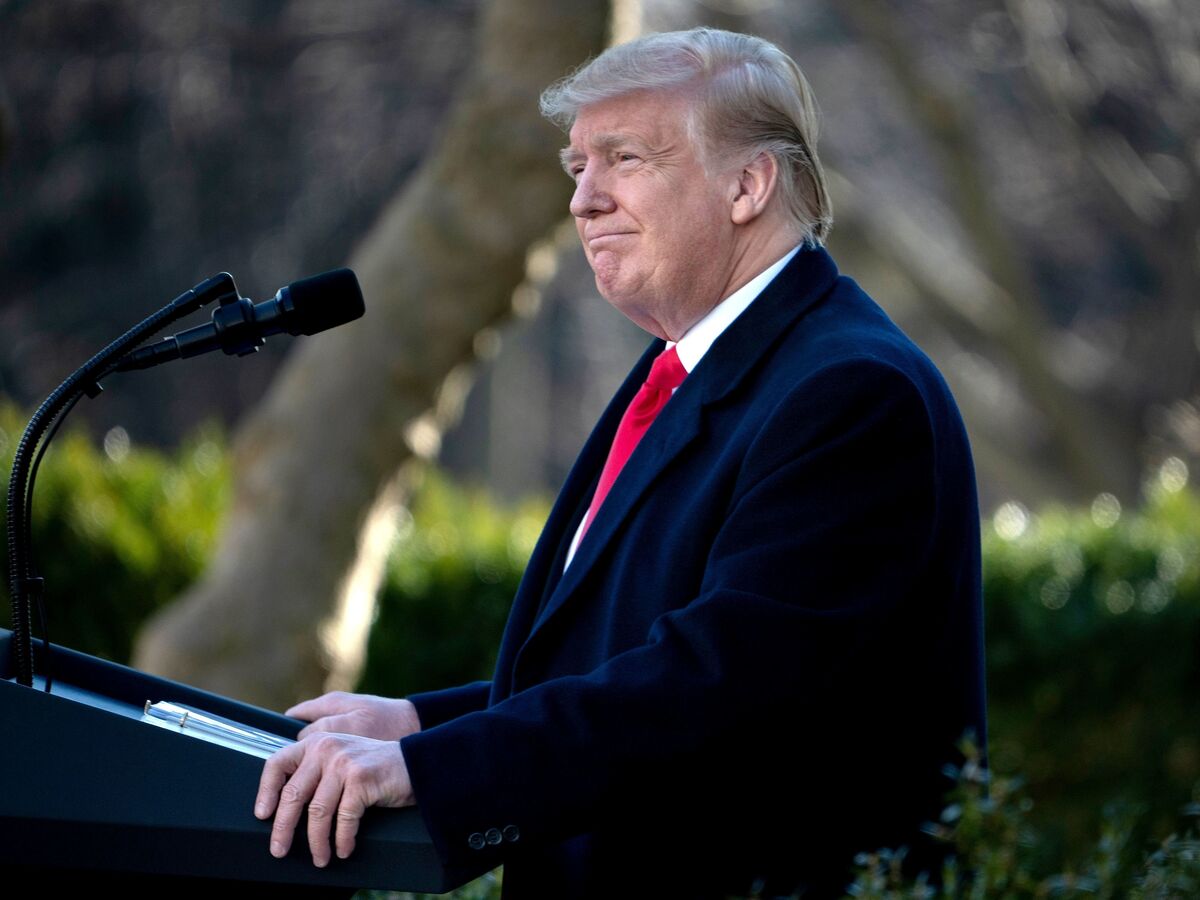 President Trump speaks on a deal to end the partial government shutdown last month. While Trump is expected to maintain his demand for border wall funding in his State of the Union speech, he is also expected to mention issues that carry bipartisan support.

President Trump's second State of the Union address will be delivered Tuesday night before a joint session of Congress with all the usual pomp and circumstance. But the political backdrop is unusual, coming in the aftermath of the longest partial government shutdown in U.S. history and on the eve of what could be another vicious fight or even another shutdown.

The fight at the heart of the shutdown — the fight over the president's border wall — remains unresolved with the clock ticking to make a deal.

White House officials are previewing a conciliatory tone from the president, as they have done before previous addresses to Congress that didn't turn out to be so conciliatory after all. As part of a briefing with reporters at which a senior official detailed what to expect from the speech but declined to speak on the record, the official read an excerpt of Trump's prepared remarks.

"Together we can break decades of political stalemate," the official said Trump will say. "We can bridge old divisions, heal old wounds, build new coalitions, forge new solutions and unlock the extraordinary promise of America's future. The decision is ours to make."

This comes in stark contrast to the uncertainty and bitterness of the moment. There is uncertainty about whether a bipartisan congressional conference committee can reach an agreement to fund border security and avoid another government shutdown.

The bitterness is displayed in part in Trump's own rhetoric about that key fight. In an interview with CBS News that aired during the Super Bowl, Trump said that House Speaker Nancy Pelosi, D-Calif., resisted his demands for $5.7 billion to build a wall (or border barrier) because "she doesn't mind human trafficking or she wouldn't do this."

"The wall is actually a wall against getting anything else done"

During the record-setting 35 days of the shutdown, the president didn't stop talking about the wall. At an American Farm Bureau Federation conference, even in Iraq to greet troops the day after Christmas, the wall was a focus.

"The wall is actually a wall against getting anything else done at this point," said Ron Bonjean, a Republican strategist who has worked with the Trump administration.

Bonjean points out that while the wall and shutdown have been nearly all-consuming for Trump, they have temporarily stymied the ambitious agenda of House Democrats too.

Bonjean says he expects Trump to throw down the gauntlet on the wall to prove that even if he lost Round 1, he doesn't intend to lose during Round 2.

"He has to demand funding for his wall," Bonjean says. "It would be malpractice for him not to."

And a State of the Union address gives the president a big moment on the national stage to make his pitch for the wall. At the same time, White House aides say other items on the president's agenda have withered in the shadow of the wall fight.

Americans want to hear more than just immigration, Bonjean argues. "They want to hear solutions to health care, to infrastructure, to data privacy, foreign policy. You name it."

Trump mentioned those issues in a news conference held the day after the midterm elections in November.

"Hopefully, we can all work together next year to continue delivering for the American people, including on economic growth, infrastructure, trade, lowering the cost of prescription drugs," Trump said. "These are some of the things that the Democrats do want to work on."

But in the midst of all this partisan rancor, can Trump actually walk into the House chamber, stand in front of Pelosi and act as though this is just a normal address in a normal time?

He wouldn't be the first president to do so.

Reset, dig in or unify?

In 1998, President Bill Clinton's State of the Union completely ignored the sex scandal swirling around his presidency, says Russell Riley 0f the Miller Center at the University of Virginia.

"By dint of his speaking skills and his personality, he was able to go in and change the tone of the debate," Riley says. "There are a lot of people within the Clinton White House that felt that that saved his presidency."

Lawmakers Make Statements With State Of The Union Guests

It's not the same situation, but Riley thinks this speech presents an opportunity for Trump.

He could reset his presidency, laying out new agenda items for the year to come and touting the accomplishments of the past two years.

Or he could dig in further to aggravate emotions over the border wall.

There's a third option, too. Trump could do what almost every president has done in these addresses: talk about finding common ground.

Based on what White House aides are telegraphing, he may try to do all three. If history is a guide, with Trump the most combative parts will be most resonant.

And it may just be too late and too toxic for bipartisan cooperation. Many of the president's allies are convinced that the Democrats are unwilling to give him a victory on anything large or small just because Trump is Trump.

And the president is so focused on keeping his base with him that he may have a hard time compromising with Democrats.