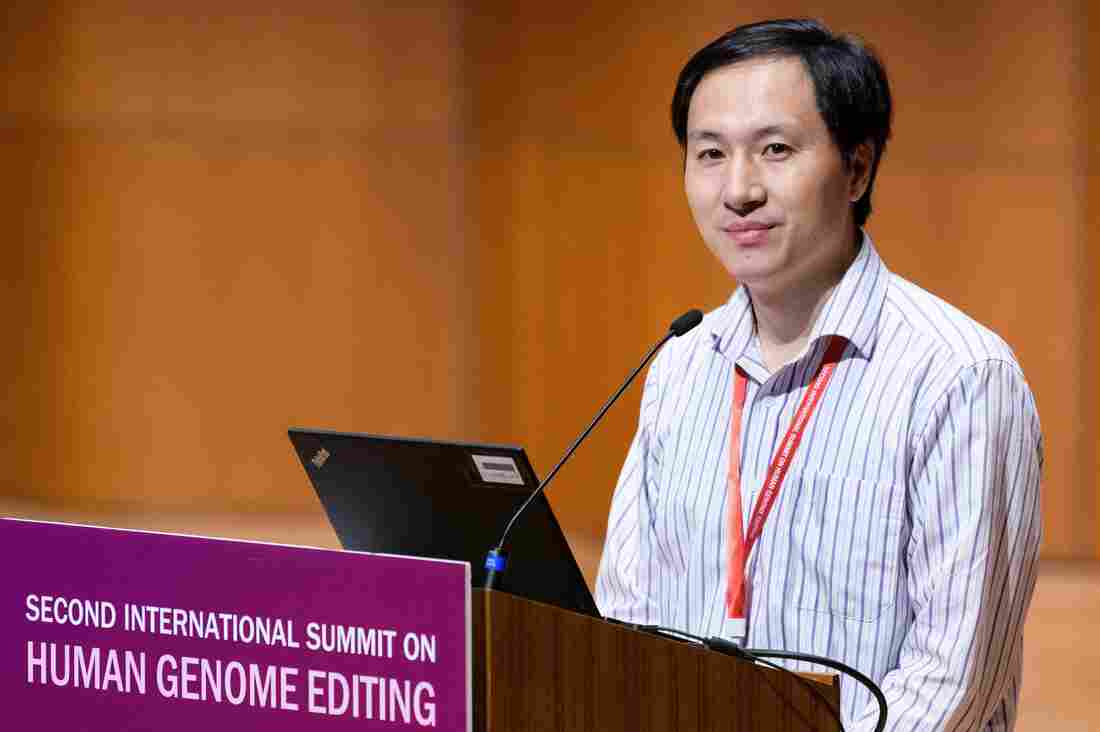 Chinese scientist He Jiankui speaks at a human genome editing summit in Hong Kong on Nov. 28, 2018. He announced an experiment on twins that raised a range of ethical questions and prompted China's government to vow to punish him. Anthony Wallace/AFP/Getty Images hide caption 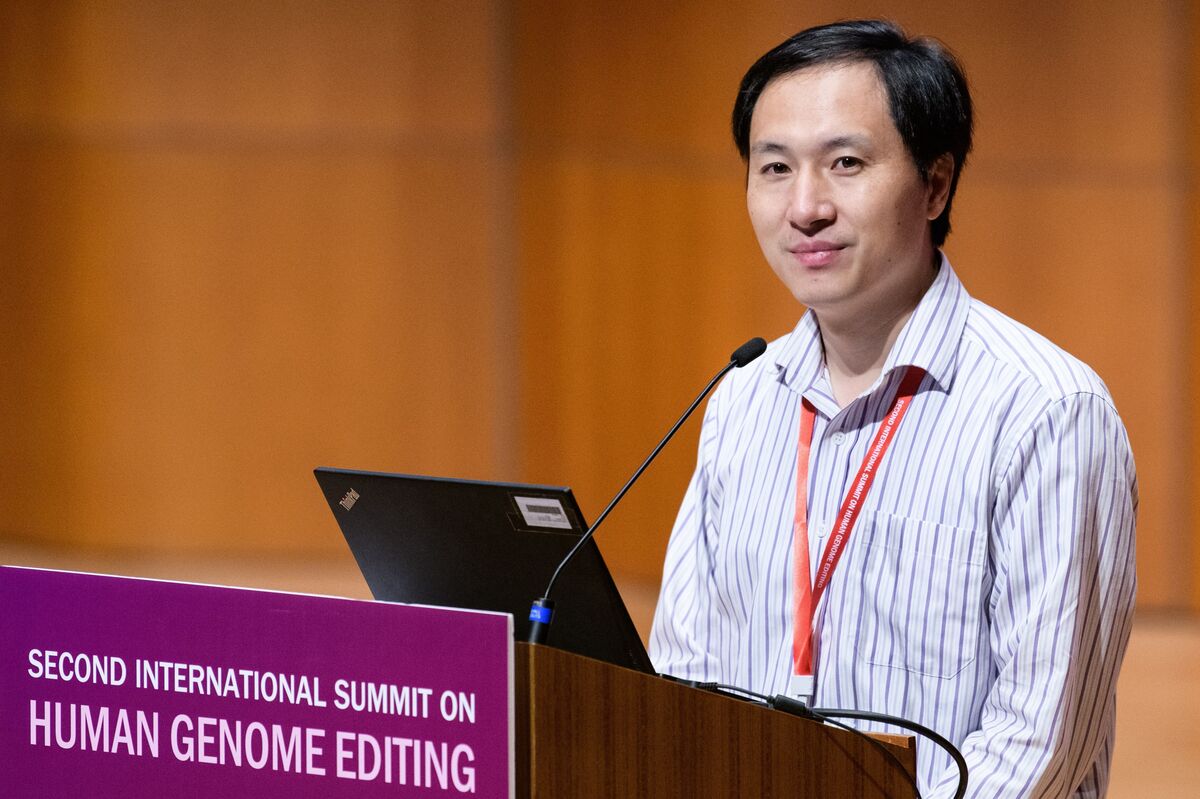 Chinese scientist He Jiankui speaks at a human genome editing summit in Hong Kong on Nov. 28, 2018. He announced an experiment on twins that raised a range of ethical questions and prompted China's government to vow to punish him.

In the fall of 2017, Chinese state broadcaster CCTV aired a series promoting China's achievements in science and technology. One episode profiled a Chinese scientist who claimed to have invented a gene-sequencing machine that outperformed those in the West.

"Somebody said we shocked the world with our machine," a man in his mid-30s says with a proud smile into the camera. "Yes, they're right! I did that — He Jiankui! That's me who did that!"

It wasn't the last time He Jiankui would shock the world.

Last November, as the scientist walked across a stage to a lectern inside a Hong Kong conference hall, there was tepid, hesitant applause from an audience of peers uncomfortable with what he was about to announce: that he had successfully edited the genes of twin girls to help them resist HIV infection. A third gene-edited baby is on the way, according to He.

He said he used a technology known as CRISPR to edit the genes of human embryos that led to live births, something that had never been done before. Chinese investigators later said they confirmed his claim.

He's experiment has raised a range of ethical questions: What if this introduced mutations in the girls' DNA that could pass on genetic diseases to future generations? And is it ethical to create gene-edited babies, who could never be willing participants in such a risky experiment?

Many researchers attacked He as reckless, and China's government — which had once celebrated his work — has now vowed to punish him.

"His actions are a product of modern China," says Yangyang Cheng, a particle physicist and postdoctoral researcher at Cornell University.

Cheng attended the same elite Chinese university as He, and she has been doing a lot of thinking about what motivated him. Cheng says his actions are not representative of Chinese scientists' ethical standards. She says he conducted a "reckless and unethical" experiment and should face consequences. But "there are structural, systematic and institutional flaws behind this experiment, what created him, what incentivized him and what failed to stop him," she notes.

He comes from a family of modest means in Hunan, where he grew up in one of the province's poorest villages. Like anyone who came of age in the 1980s and 1990s in China, he was surrounded by one of the world's fastest-growing economies in history. And Shenzhen, the city where he launched his career, was China's first special economic zone. The city was home to an unfettered capitalism that created global giants like Huawei and Tencent; a place where strivers like He battled each other to make a name for themselves.

"I think part of his motivation was that he wanted to do something that is world's first," says Cheng. "And that could give him more name recognition in the hopes that it will bring him more investments and also more future business opportunities for his companies."

China's government promoted the same goals, and it wanted Chinese companies and scientists to break new ground in a range of technologies.

One government campaign, named "indigenous innovation," called on Chinese companies to acquire technology through buying foreign companies, setting up joint ventures with them inside China and recruiting overseas talent.

That 2017 TV profile of He and his gene-sequencing machine was part of the campaign. The tool that He claimed as his own, and that CCTV touted as China's own, was based on the core technology of a machine created by He's American postdoctoral supervisor at Stanford University. When the adviser's company went bankrupt in 2012, He's connection allowed him to license the company's technology at a bargain, says Cheng. "But regardless, this was still being seen as a Chinese company, Chinese technology, and there was a lot of state-sponsored and government-pushed propaganda efforts behind it."

And while Beijing's push for global dominance in the sciences enabled He, the government's lax regulatory environment may have contributed to his gene-editing experiments, says Shanghai-based medical ethics lawyer Lu Yiguang.

"There's only a few low-level laws in China that cover gene editing on human embryos, and none of these laws detail the consequences of violating them," he says. "This is a big flaw."

Last month, a preliminary investigation by authorities in Guangdong province concluded that He avoided supervision and organized and fundraised for a project to edit genes of human embryos intended for reproduction, which was against Chinese law, according to state media Xinhua. (Several U.S. researchers are reported to have been aware of the research.)

Yet from a legal perspective, it will be difficult for Chinese authorities to punish him, according to Lu, who is an expert on the country's few laws applicable to He's research.

"I hope this case will push the government to introduce more laws," Lu says. "We're developing so many new technologies — cellular immunology, artificial intelligence — without proper regulatory supervision; experimenting with them will become very dangerous."

Following the controversy around He, Chinese President Xi Jinping called for new regulations on gene editing.

Just as He's work is a product of China's political and legal landscape, it is also a result of aspects of Chinese society and culture, according to Tongji University professor Zhu Dake. "The Chinese way is to only think of success," Zhu says. "We don't think of whether the path to that success is legal or ethical, and you can use as many tricks as you want as long as you succeed. Every Chinese person grows up with this notion."

And there's another cultural aspect of China that scientist Cheng says plays a big part in He's work: the role of gender. Cheng says Lulu and Nana, apart from being twin baby girls whose DNA was altered by a male scientist, were created this way by He for an expressed reason. At the Hong Kong conference where He officially announced his experiment, he said Mark, the name he uses for the twins' father, had lost hope for his life after learning he was HIV-positive. But, says He, when he altered the genes of Mark's twin daughters in an effort to make them resistant to the virus, Mark's hope in life was restored.

He repeated this in YouTube videos he made about the experiment, adding that he too is a father of two girls and understood Mark's dilemma.

Cheng says He's decision to justify his experiment this way was exploitative of troublesome aspects of gender imbalance in Chinese culture. "He Jiankui exploited the shame of the father, the desire of fatherhood, the societal expectation of how men are expected to carry on the family life," says Cheng. "And that was used as a way to recruit volunteers and subjects for his experiment."

Cheng's hope is that the case of He will prompt Chinese scientists and politicians to reflect on how this happened and take measures to ensure it doesn't happen again.