Accessibility links
In 'Go Ahead In The Rain,' The Love For A Tribe Called Quest Is Infectious Author Hanif Abdurraqib has a seemingly limitless capacity to share what moves him and to invite the reader in: His love for these music-makers is contagious, even when it breaks his heart.

In 'Go Ahead In The Rain,' The Love For A Tribe Called Quest Is Infectious

In 'Go Ahead In The Rain,' The Love For A Tribe Called Quest Is Infectious 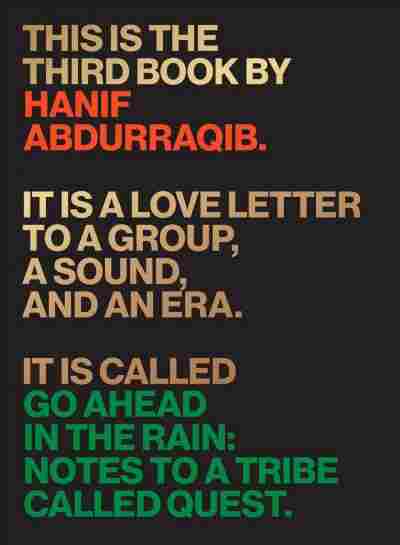 Go Ahead in the Rain

Notes to a Tribe Called Quest

Like any good origin story, poet and critic Hanif Abdurraqib's Go Ahead in the Rain: Notes to a Tribe Called Quest begins in the beginning: "In the beginning, somewhere south of anywhere I come from, lips pressed the edge of a horn.... In the beginning before the beginning, there were drums, and hymns, and a people carried here."

Abdurraqib unspools history from here, carrying the reader through centuries of African-American music-making in a capacious few pages that end with the 1990 release of A Tribe Called Quest's first album, People's Instinctive Travels and the Paths of Rhythm.

Go Ahead in the Rain is at once an extended critical essay, a hip-hop history, and a series of love letters to A Tribe Called Quest, and particularly to the group's two star MCs, Q-Tip and Phife Dawg. In his two previous books, The Crown Ain't Worth Much and They Can't Kill Us Until They Kill Us, Abdurraqib demonstrated his expertise at compressing massive emotions into minimal space. Here, he takes that skill up yet another notch. He has a seemingly limitless capacity to share what moves him, which means that to read Go Ahead in the Rain, you don't need to be a Tribe Called Quest fan: Abdurraqib will make you one. His love for the group is infectious, even when it breaks his heart.

The story of A Tribe Called Quest is, from a certain vantage, heartbreaking. From most, it's mythic. Childhood friends Q-Tip and Phife Dawg began rapping as high schoolers in Queens, using music "as a bridge to each other." By the time they were 25, they had become one of hip-hop's greatest groups. They rooted their sound in jazz like few rappers before them, creating a sound that both honored and transformed the past. They were crucial members of the Afrocentric hip-hop collective Native Tongues, and Q-Tip and producer Ali Shaheed Muhammad became two-thirds of The Ummah, a production collective that made songs for Janet Jackson, Whitney Houston, and many more. Meanwhile, their own albums made them undisputed stars.

But Q-Tip overshadowed Phife Dawg, and tensions between the two rose until 1999, when A Tribe Called Quest released their fifth album and then broke up. When the group reunited in 2016, Phife Dawg was suffering from the diabetes that had long plagued him — on Midnight Marauders, Tribe's third album, he rapped, "When's the last time you heard a funky diabetic?" — and before A Tribe Called Quest's final album came out, Phife was dead.

Abdurraqib does not shy from his sadness over the group's breakup or Phife Dawg's death, but Go Ahead in the Rain is not a sad book. Instead, it's steeped in gratitude and joy. Abdurraqib celebrates Tribe's invocation of jazz, their "rap music for our parents and theirs [that] left the door open wide enough for anyone to sneak through." He weaves his own memories of A Tribe Called Quest with the group's history, imbuing music history with empathy and locating his past self in music history. A particular standout on that front is the third chapter, in which Abdurraqib moves smoothly from his own teenage friendships to how he imagines it felt to be in Native Tongues. "The thing about Native Tongues," he concludes, "is that they were like my crew, or potentially your crew. They were uncool enough to define a new type of cool on their own terms... The Native Tongues briefly built a world in which they knew themselves as each other's people."

Potentially your crew is the key to that passage, and to Abdurraqib's critical approach. Without fail or hesitation, he invites the reader into the text. Even his deepest dives into history and technique have a come-with-me spirit. Take his chapter on production, which he roots equally in technique and philosophy. When A Tribe Called Quest emerged, hip-hop beats were made through the painstaking process of sampling other songs' rhythms and riffs. In Black Noise, her seminal study of rap music, Tricia Rose used Tribe to demonstrate the power of sampling: "A Tribe Called Quest's 'Verses from the Abstract' features Ron Carter on bass but the hip hop drum lines completely recontextualize Carter's jazz sound." To Abdurraqib, Tribe's production did more than recontextualize. He calls it "the art of resurrection," and he admires it with all his huge heart. In a letter to Q-Tip, he writes, "I love the sample as you love the sample, Tip — for how it can be extracted from the past and stretched over a sound reaching for the future."

You don't need to be a Tribe Called Quest fan to read Go Ahead in the Rain, and I envy the reader who comes to their music through Abdurraqib's prose, but this is not (or not only) a book for beginners. I have been listening to A Tribe Called Quest my whole musically conscious life, and yet Go Ahead in the Rain made their records sound new. Listening to People's Instinctive Travels now, I hear the introduction to "After Hours" as a warm cavern of sound. The first bars of "Push It Along" glitter like geodes.

This comes from deepened knowledge and understanding, but it also comes from absorbing Abdurraqib's love, which reinvigorated my own. This, too, is a way of reaching for the future: to write about music so beautifully and intelligently that readers are moved to love it, or reminded to love it more.