Accessibility links
'Bowlaway' Scores A Strike Elizabeth McCracken's new novel — a multigenerational saga centered around a Massachusetts bowling alley and its crew of misfits — will grab you from the very first line. 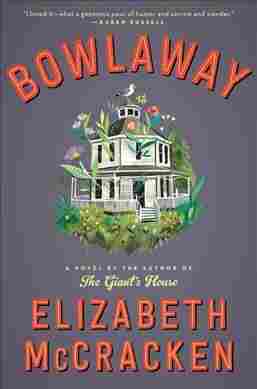 Life is strange and people are odd. That's one of the takeaways from Elizabeth McCracken's wildly entertaining third novel, a wonderfully unpredictable multi-generational saga which revolves around a Massachusetts bowling alley. Like all her fiction, including her 2014 story collection, Thunderstruck, and her much-loved novels, The Giant's House (1996) and Niagara Falls All Over Again (2001), Bowlaway celebrates the oddest of oddballs and the freakiest of freak accidents with wit and heart. To read McCracken's inimitably clever sentences and follow her quirky narrative twists is to be constantly delighted.

Bowlaway grabs you from the very first line: "They found a body in the Salford Cemetery, but aboveground and alive." It's the turn of the 20th century, and Bertha Truitt — a middle-aged woman in a divided skirt suitable for cycling — is discovered, unconscious, by a teenage watchman who is "uneasy among the living and not much better among the dead." He's soon joined by Leviticus Sprague, a black doctor and poet from New Brunswick, Canada, who asks the newly awakened Bertha what she's doing there. (The same might be asked of him.) "Darling sir," she replies, "I was dreaming of love." Questioned about where she's come from, all she'll say is, "I'm here now."

In Bertha's Gladstone bag is a narrow wooden candlepin, a wooden ball the size of "a grapefruit, an operable tumor," and, under a false bottom, fifteen pounds of gold. (We're never quite sure where that came from, either.) McCracken's unnamed narrator interjects, "Our subject is love because our subject is bowling. Candlepin bowling. This is New England, and even the violence is cunning and subtle."

There is so much life in McCracken's prose. Her heroine is "jowly, bosomy, bottomy," yet a gamine at heart — and always on the march: "She was the oddest combination of the future and the past anyone had ever met." Like her Stanley Steamer car, Bertha is "steam powered," but a proto-feminist set to boil, not simmer: "What she wanted was a kind of greatness that women were not allowed. If they were allowed a small measure of it, they had to forsake love. She forsook nothing" — except corsets.

A proselytizer for candlepin bowling, (a more challenging version of the game than tenpin), Bertha "bowled because the earth was an ocean and you had to learn to roll upon it." She decides to stay on in Salford, a swampy city "hard north" of Boston, and open Truitt's Alleys. Her first hires are Joe Wear, the teenager who found her, as manager, and another local misfit, Jeptha Arrison, as pinsetter. (McCracken reportedly found most of her characters' names in a genealogy book that belonged to her grandfather.)

Oblivious of bigots and gawkers, Bertha defies racial prejudices in her second marriage, which produces an unplanned, late-life child. She also bucks convention by welcoming women to her establishment, including LuEtta Mood, who bowls to escape a self-satisfied husband who McCracken skewers exquisitely as seeming to "ladle his laughter out like a philanthropist feeding the poor." LuEtta also bowls to escape her grief over her infant daughter's death — the result of one of many freak accidents that knock down McCracken's characters like so many vulnerable bowling pins. LuEtta's suffering enables her to recognize that Bertha's so-called merriment "was trained on a trellis of sorrow."

To read McCracken's inimitably clever sentences and follow her quirky narrative twists is to be constantly delighted.

Even amidst much woe — including the most bizarre demise of all, from a molasses storage tank explosion in Boston (based on a real event that occurred exactly 100 years ago, killing 21 people and injuring 150 in its sticky wave) — it's a joy to unravel the mysteries of these eccentric lives. Several characters are orphans, forever in search of love and a sense of belonging after difficult childhoods. They forge an extended family that defies both genealogy and conventional relationships such as siblings, step-siblings, and in-laws. "There was no term for the issue of your first wife's second marriage," one character seeking a familial connection notes, while another observes that there's no word, like widow or orphan, that denotes having lost a brother.

In a book that offers many unforeseeable turns, one of the most surprising (which I won't spoil) is the life trajectory of Bertha's loyal manager, about whom McCracken writes, "They were alike, Joe Wear and Bertha Truitt, foundlings for whom the rolling ball was the feel of a hand on a forehead, a light touch of love on the back. Bowling gave you something to think about besides your regrets."

Bowlaway, too, gives you something to think about besides your regrets. Under the guise of a playful portrait of three generations' involvement with a nascent sport in small-town New England, McCracken's novel encompasses issues of race, class, gender, and sexuality in 20th century America. Add to that the many unusual forms love takes — and death, too — and you've got a novel that scores big.