Accessibility links
Wisconsin Boy Is Hooked On Crocheting And Giving Back Jonah Larson is a globally renowned crocheter — at the age of 11. He sells his goods on Instagram and donates a portion of his earnings to the Ethiopian orphanage where he was adopted. 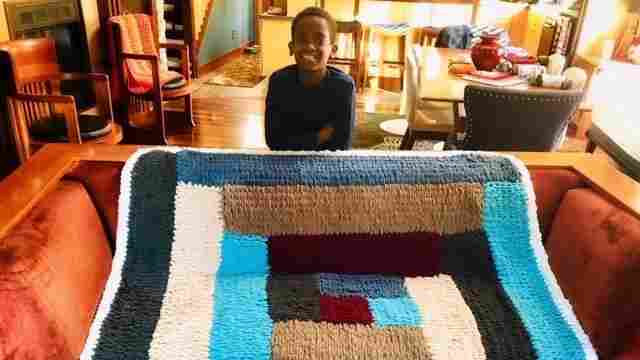 Eleven-year-old Jonah Larson's favorite hobby is crocheting, which he turned into a business. He made this blanket in January during a snow day from school. Courtesy of Jennifer Larson hide caption 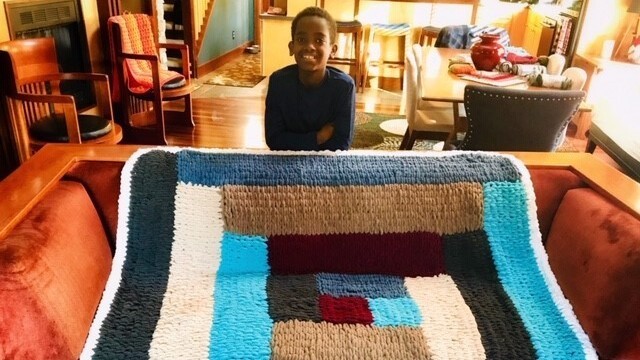 Eleven-year-old Jonah Larson's favorite hobby is crocheting, which he turned into a business. He made this blanket in January during a snow day from school.

Jonah Larson taught himself how to crochet at age 5 by watching YouTube videos. Now 11, he has been described as a "crocheting prodigy." He has his own crochet business, called Jonah's Hands, based out of his home in La Crosse, Wisc.

Crocheting has also made him a social media star — but he doesn't do it for the fame. Jonah has more than 46,000 followers on Instagram, where he sells his goods.

"After a very hard, busy, chaotic day in this busy world with school, it's just nice to know that I can come home and crochet in my little corner of the house while sitting by the one I love most: my mom," Jonah tells NPR.

He tells NPR his most difficult design was crocheting a blanket with 800 plush flowers on it.

Jonah regularly donates some of his goods and money to the Ethiopian orphanage from which he was adopted as an infant.

'The Knitting Finns': For Finnish Athletes, Needles And Yarn Are Part Of The Olympic Routine

'The Knitting Finns': For Finnish Athletes, Needles And Yarn Are Part Of The Olympic Routine

His mother, Jennifer Larson, doesn't crochet, but she does run his Instagram account and has joined a few Facebook crocheting groups on his behalf. It's up to Jonah, she says, to decide what he does with the profits.

"I don't buy his yarn for him. He buys his own yarn from the profits he makes from selling," she says. "He saves some money, he's investing some money and he donates as well. So those are things I think are important in life for adults to do, and I'm glad that he can learn that at an early age."

The crocheting community has responded positively as well, and a few people even sent him custom hooks.

"I hope people gain from seeing my work is it makes them happy too," Jonah says. "When I see my crochet work when it's done, it blows my mind to know that I, an 11-year-old with a tiny hook and a ball of yarn, made this amazing afghan, scarf, cowl, you name it."

After an article was published about him in a local paper last month, his story went viral. Jonah now has over 2,500 orders and has temporarily stopped taking new requests.

His next goals: attending a crochet summer camp, attending the U.S. Military Academy at West Point and then becoming a surgeon.