Accessibility links
'The Collected Schizophrenias' Conveys What It's Like To Live With A 'Hidden' Illness In her new book of riveting, honest, courageous essays, Esmé Weijun Wang provides a series of lenses through which to observe schizophrenic disorders and, by extension, our (mis)understanding of them. 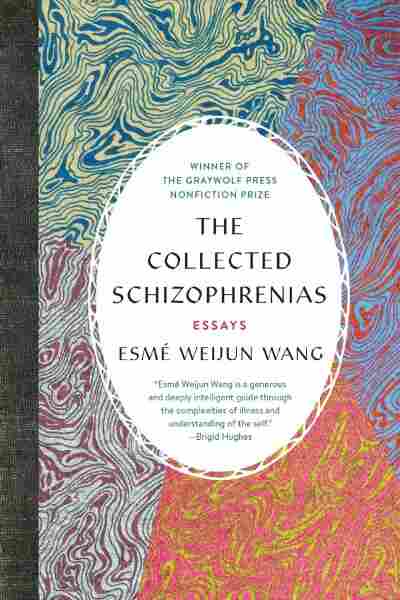 "Some people dislike diagnoses, disagreeably calling them boxes and labels," writes Esmé Weijun Wang in the first essay of her new book, The Collected Schizophrenias." [B]ut I've always found comfort in preexisting conditions. I like to know that I'm not pioneering an inexplicable condition."

One of the more frightening things about any painful experience that isn't outwardly obvious to the people around us — like some mental and physical illnesses or disabilities — is how difficult it is to communicate what it feels like to those around us. Writers like Wang, however, give us a gift in their ability to convey the indescribable through language.

In 13 tightly organized essays, The Collected Schizophrenias, winner of the 2016 Graywolf Press Nonfiction Prize, reveals different aspects of Wang's diagnoses — schizoaffective disorder, bipolar type and late-stage Lyme disease — through simply-conveyed research, powerful metaphor, and personal experiences. Starting with the science in "Diagnosis" and "Toward a Pathology of the Possessed," and ending with the spiritual and mystical (or at least a door left open for them) in "Chimayó" and "Beyond the Hedge," Wang provides a series of lenses through which to observe the schizophrenic disorders and, by extension, our (mis)understanding of them.

Wang is not immune to judgment, both directed at — and by — her. In "High Functioning," she admits:

"Because I am capable of achievement, I find myself uncomfortable around those who are visibly psychotic and audibly disorganized. I'm uncomfortable because I don't want to be lumped in with the screaming man on the bus, or the woman who claims that she's the reincarnation of God."

This kind of honesty is bracing, and at times difficult to square with Wang's descriptions of her own psychotic episodes, audible and visual hallucinations, and perhaps scariest of all, the period of time she believed she was dead, or the stretches during which she believed those she loved had been replaced by false duplicates that didn't evoke any feelings in her. But it is precisely because of these experiences, she explains, that she's "uncomfortably uncomfortable" around the visibly psychotic: "I know that these are my people in ways that those who have never experienced psychosis can't understand, and to shun them is to shun a large part of myself."

Unlike many narratives about illness, this is not one of miraculous recovery, sunny positivity, or a grin-and-bear-it mentality. In fact, Wang only occasionally deals with how the outside world sees her — instead, she is busy with understanding herself, mirroring her experience through words, and learning coping mechanisms that she knows won't heal her (there is no cure) but that may help her live as best she can. One of these coping mechanisms that is especially interesting to anyone familiar with Wang's online brand is the pairing of fashion and photography:

"[The bra] arrived. I slipped it on. It was, somehow, ridiculous in its sexiness. The cups barely covered... It was me, but it also wasn't me. I took a self-portrait with my 1970s Polaroid camera... I told myself, through mirrors and dressing up and Polaroids and weighing myself, You have a body. The body is alive."

Once a fashion blogger and editor, Wang is extremely fashionable in any photo you might find of her, and she knows that her put-together appearance allows people to view her as "sane" and "normal." This, alongside other shorthands — like the fact that she went to Yale and Stanford for undergrad and has an MFA from the University of Michigan — are survival tools in a world that shifts with discomfort or fear at the idea of schizophrenia.

Mental illnesses that distort our accepted reality are difficult, in part, because of the cognitive dissonance between good days and bad days. In "Reality, On-Screen," Wang describes in vivid detail the way fictional realms can become dangerous for her if she's nearing or experiencing a psychotic episode. One night, watching an episode of Doctor Who with her husband, Wang became lost:

This simple description broke my heart — first, because the level of confusion it implies must have been so scary and disorienting, but also, because as a mentally ill person myself, I know how strange it is to observe, from a distance, one's "crazier" moments.

The Collected Schizophrenias is riveting, honest, and courageously allows for complexities in the reality of what living with illness is like — and we are lucky to have it in the world.