'Hard To Love' Offers Tribute To Life's Many, Varied Relationships

'Hard To Love' Offers Tribute To Life's Many, Varied Relationships 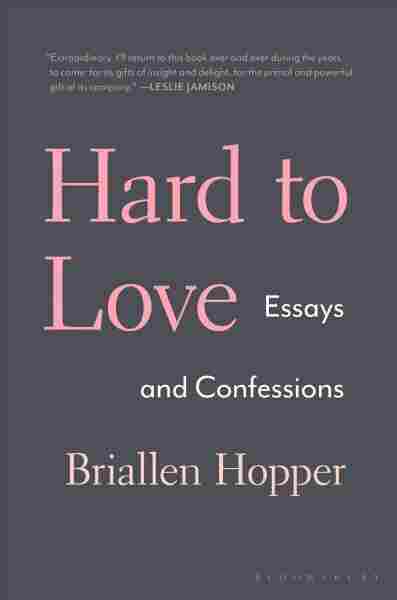 Many Americans find it adequate to represent their love and devotion to one person in a single ring on their left hand.

Author Briallen Hopper would need to enlist far more metal to represent her commitments. She would have to wear stacks of rings on each finger or a clanging forearm's worth of bracelets to signify each close friend, sibling, godchild, student, author, fictional character, and sentimentally-imbued object that receives her time and support.

Instead, she's written public tributes to these relationships. In her rousing essay collection Hard To Love, Hopper takes us into her unusually expansive love life, complete with knotty familial relationships, deep friendships, and emotional investment in the fictional and material worlds.

By loving widely and fiercely, Hopper defies the narrative rules of the marriage plot: Emotional fulfillment, she shows, need not include a spouse. After her relationship of six years ended, she shifted from (precariously) putting all her weight on one man to what she calls "sustainable dependence." She writes, "I learned to practice mutual, broadly distributed leaning: to depend on care that was neither compulsory nor conditional, and on lavish, unrationed, unanticipated kindness."

That lavish kindness comes, largely, through friends. In this sense, Hopper is contributing to a growing body of recent writing (Text Me When You Get Home, The Friendship Cure) and pop culture storylines (Broad City, Insecure) that underscore the depth and significance of female friendships. But Hopper's book feels distinct from and, in some ways, more daring than these. Depictions of best friendships between women are radical in their suggestion that a fulfilling partnership doesn't need to be a heterosexual romantic relationship. Yet they operate within similar constraints; a romantic partner gets substituted with a friend. Hopper shows there's a far wider array of possible platonic relationships than usually appear in print or on screen. Her friendships take on a variety of configurations (different sizes, many are long distance), involve serious commitments (caring for a chronically ill friend), and, at times, complications, like when Hopper gets taken in by a friend and resentment brews.

The most poignant essay in the collection, "Coasting," involves all of these elements. Hopper's friend from divinity school, Ash, was diagnosed with late-stage esophageal cancer. Hopper and three other friends of Ash's form a robust "care team." They take detailed notes during Ash's doctor's appointments and join her for "writing retreats" at the hospital. The out-of-town friends fly in whenever they can spare a weekend, sometimes with an infant or spouse in tow. This was not a band of four close friends who'd spent years curled up on couches together or clinking drinks with one another. They started off as strangers or acquaintances, their only mutual tie being Ash. Nevertheless they quickly learned how to fashion a safety net together.

While Hopper's brilliant first chapter sketches a compelling vision of "broadly distributed leaning," it's essays like this one — where her relationships are on full display — that her proposed system comes to life. Support in the form of four sets of hands and hearts and minds seems sturdier and saner for everyone involved than full weight on one.

Though much of the book centers on friendship, all of the essays consider the range of ways to love outside of marriage. With humility and tenderness, she writes about the smooth and serrated edges of her sibling relationships, including how her once-close bond with her brother has been roiled by a difference in opinion about Christianity.

In one particularly vulnerable essay, Hopper talks about a focus of her ardor that would make Marie Kondo squirm: objects. A worn-out stuffed animal. A set of vintage lobby cards. A broken butter dish. Hopper, like generations of other women in her family, is a hoarder. Though she writes openly about the complications her hoarding has created, Hopper resists hoarding books' admonition to scrub objects of any sentimentally. "I am fascinated by the way hoarding allows human relationships to be mediated and commemorated through objects," she writes, "and the way it allows for the maintenance of loss and supplemental and prosthetic selves." Things, to her, are vessels of memories and emotion.

It's not just objects that stir love in Hopper. Imaginary people and places do, too. A literature scholar, she writes about fictional worlds in movies, TV shows, and books with as much vividness and fondness as she does about her relationships with living, breathing humans. Some of the collection's most moving essays fold pop culture or literary analysis into her personal stories: The novel Girls on Fire, with its haunting portrait of girlhood, helps Hopper make sense of a frightening period in her teenage years; Her ingenious, darkly comedic essay on searching for a sperm donor manages to invoke Moby-Dick — one of the heftiest (and most suggestive) books in the American canon. The strength of her culture essays vary, though. When, as with "Pandora in Blue Jeans," she analyzes a book or show without the frame of a compelling personal narrative, I find it hard to share Hopper's fascination with the subject.

By giving dignity to female friendships, to the feeling of finding a home in a fictional neighborhood bar or solace in an item, Hopper rejects what she calls the "two American creeds": marriage and self-reliance. Marriage, as far as she can tell, is the sole socially permissible form of dependence in the United States. A single woman in her late-30s, Hopper isn't interested in that kind of dependence, but nor does she desire stoic self-reliance. She's repelled by the brand of singleness that celebrates a life shorn of commitments to others or solitude valorized by American writers ranging from Ralph Waldo Emerson to Joan Didion.

What if, Hopper suggests, maintaining a thicket of varied, devoted relationships is not just about building support? What if it's a prerequisite for understanding yourself? "What if," she writes, "locating yourself by yourself is like trying to use a compass without the North Pole and what if the expectations of others are constellations to navigate by?"